The modern development of China is driven by innovation. Some scholars hold that the individual innovation of employees is the source of enterprise innovation and is also the fundamental motivating force and foundation for improving enterprise innovation performance (Li et al., 2013). Knowledge workers are the most active core resources in the enterprise technological innovation system. Therefore, how to give full play to the creativity of knowledge workers and improve their innovation performance is becoming an increasingly critical concern. Leadership is also a core enterprise component and has an important influence on innovation and organizational performance (Ma and Zhang, 2018). Different management styles may have entirely different effects. With the growing emphasis on localization in management, paternalistic leadership has emerged as a management style characteristic of East Asian societies and contrasts with Western practices (Wu and Zhang, 2018). Paternalistic managers are influenced by traditional Chinese cultural concepts that reflect “mixed characteristics” involving authoritarian leadership, benevolent leadership, and moral leadership (Lin and Zhuang, 2014). Therefore, Western leadership theories cannot fully explain the leadership style and behavior of Chinese enterprises or their impact on innovation performance.

The social exchange theory was first proposed by Homans (1958). He pointed out that all human behaviors are exchange behaviors, such as material exchange and nonmaterial exchange, seeking to satisfy their needs and trying to achieve pay and return equivalence (Homans, 1958). Blau (1964) revised and developed the social exchange theory, pointing out that individuals engage in social interaction to maintain positive relationships, which are required to achieve reciprocity and promote the development of social exchange behavior. Blau divided exchange behavior into the economic exchange and social exchange, where the former is based on the exchange of interests, and the latter is based on the long-term mutually beneficial relationships and in-depth mutual trust. The social exchange theory provides an important theoretical basis for the proposed relationship among paternalistic leadership, the constructive deviance of employees, and innovation behavior. The constructive deviance of an employee will be influenced by interaction with others, and the close relationships between leaders and subordinates would result from employees feeling inspired by the benevolence and impartiality of leaders, forming a high-quality hierarchical exchange relationship. Employees are more willing to follow the leaders they find to be sympathetic, which will improve work engagement and promote exchange balance. This is beneficial to maintain the long-term sustainable mutually beneficial relationships between leaders and employees.

Benevolent leaders are always solicitous to their subordinates, providing them with necessary resources and maintaining a close association with them (Huang et al., 2014). Benevolent leaders can not only increase the work enthusiasm of their subordinates but also stimulate them to provide positive opinions for decision-making (Lin and Zhuang, 2014). Moral leadership reflects excellent personal cultivation and integrity, and moral leaders set a good example for subordinates, make clear distinctions between public and private interests, and provide emphasized fairness and justice in decision-making, to maximize their credence and respect. Conversely, authoritarian leaders focus more on hierarchy, normally relying on institutional or personal authority to suppress subordinates, which will reduce the organizational identification and work enthusiasm of workers and will hinder innovation performance (Liu et al., 2017). Thus, this study proposes the following hypotheses:

H3: Authoritarian leadership has a negative impact on innovation performance.

H4: Constructive deviance of employees has a positive impact on innovation performance.

Moral leadership refers to a set of behaviors that remain a good example for employees, clearly distinguish between public and private interests, and emphasize fairness and justice, resulting in the enthusiasm of employees being closely related to the moral conduct of their leaders (Cheng et al., 2004). Constructive deviant behavior entails employees violating organizational norms and regulations out of the belief that such behavior will ultimately benefit the organizational wellbeing. Based on the social identity theory, the self-perceptions, emotions, and behavior of employees are affected by organizational norms, examples, and views. An in-depth understanding of organizational goals and values will encourage the deviant innovation behavior of employees, by which they seek not only to benefit the organization but also to achieve personal goals.

To a certain extent, the centralization of authoritarian leadership results in decision-making based on personal judgment or preference instead of organizational system and rules, resulting in an unequal atmosphere within the organization (Zhang et al., 2018). The long-term centralization of authority and inequality will create an authoritarian environment (Ma and Zhang, 2018) in which the innovative ideas of employees are rejected by their leadership. This type of leadership actively discourages violations of organizational rules and regulations and thus deviant innovation behavior. Therefore, this study speculates that constructive deviant behavior is less likely to occur under authoritarian leadership:

The Mediating Role of Constructive Deviance

To ensure their authority, authoritarian leaders studiously maintain distance from employees and will avoid close exchanges with their subordinates, resulting in employees feeling a lack of psychological security or positive attitudes toward initiating innovation and team cooperation. The tolerance and support of benevolent leadership create a free atmosphere that supports subordinates, optimizing work results and efficiency, with leaders sharing with and learning from team members. Moral leaders rely on their charisma to influence and educate employees, encouraging them to fully identify with the organizational values and enhancing team cohesion and cooperation. Such leaders consider the psychological state of their employees, encouraging them to express their ideas and providing work resources and feedback, giving employees a strong sense of organizational attachment. The social exchange theory suggests that employees with a high organizational attachment will proactively maintain the interests of the organization, even if doing so requires actions that deviate from established norms (Li and Liu, 2014). Ming and Wenquan (2013) pointed out that leaders who treat employees favorably will arouse a strong sense of mission and responsibility toward the leaders and organization. This positive self-cognition may cause employees to engage in deviant behavior as a means of benefitting the organization. According to the active motivation model proposed by Parker et al. (2010), leadership style is an important work situational factor that can motivate employees to engage in active behavior beyond job responsibilities. Thus, this study proposes the following hypothesis:

As shown in Table 1, existing variable definitions were adapted to match the research purpose. 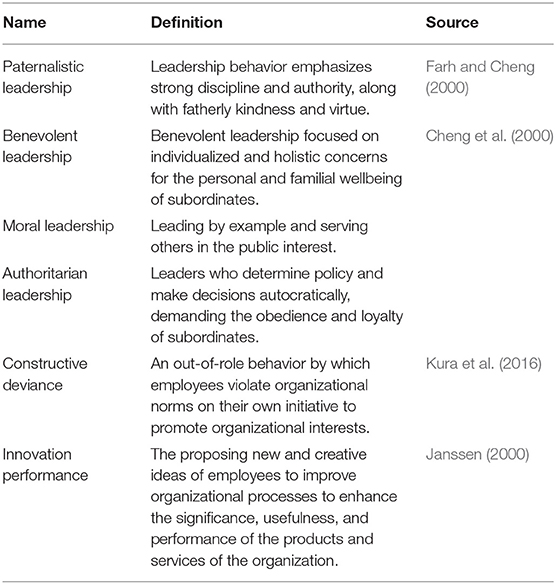 Galperin (2012) proposed a constructive deviance scale with nine items, such as “In order to complete the task, sometimes I will deviate from the rules.”

The data were collected by questionnaire. SPSS 22 was used to perform the descriptive statistical analysis, and Pearson's correlation coefficient was used to investigate the relationships between variables (Statistical Product and Service Solutions, IBM SPSS Inc., Armonk, NY, USA1). The significance of the mediating effect was computed using PROCESS by Hayes (2012), using the bootstrapping technique. The sample included four high-tech and manufacturing companies in the Yangtze River Delta, with data gathered using online surveys, site surveys, and commissioned surveys. The online survey was conducted using the Questionnaire Star platform. The researcher established contact with the target enterprises, explaining the goals of the research, along with questionnaire instructions and anonymity assurances. The research process involved two steps, namely, pretest and formal test. The pretest was used to test the validity and comprehensibility of all questionnaire items. There were 60 pretest questionnaires distributed, of which 53 were received and analyzed. The pilot questionnaire was then modified to compose the final questionnaire, which was distributed in December 2020, with a total of 250 questionnaires distributed through various channels, of which 230 valid responses were received, for a response rate of 92%. Respondents were primarily aged under 35 years old and were 56.7% men. College graduates accounted for 63% of respondents, while 10% had a master's degree and 5% had PhDs. In terms of the employer, 47.2% of respondents worked at private companies, followed by 19.5% at state-owned enterprises and 17.7% at government/public institutions.

Table 2 summarizes the descriptive statistics and the results of correlation analysis.

The significance of the mediating effect was computed using PROCESS by Hayes (2012), using the bootstrapping technique. Table 4 shows the results for 5,000 sampling iterations and constructing 95% unbiased corrected CI.

Table 4. The result of mediating effect.

While paternalistic leadership with Chinese characteristics fits the present development situation in China, this study seeks to understand the relationship between paternalistic leadership and innovation performance. Prior research on factors that impact constructive deviance focuses mainly on work autonomy (Dietfried and Soren, 2015; Liu et al., 2017), organizational innovation climate (Wang et al., 2018), and employee creativity (Yang et al., 2019). Leadership style (Yi, 2018) should also be considered as an antecedent of constructive deviance. Few studies have examined the mediating effect of the constructive deviance of employees. This study explores the influence of constructive deviance on innovation performance, deepening our understanding of employee behavior and the quality of interaction between leaders and employees. Based on the social exchange theory, this study explored the impact of paternalistic leadership on innovation performance. Previous studies mainly focus on the self-awareness theory (Wang and Tian, 2019) and the self-determination theory (Wang and Tian, 2019) to explore mechanisms that impact employee innovation.

This study is subjected to certain limitations that potentially limit the generalizability of the findings. First, although the questionnaire was found to have high reliability and validity, it relies on subjective responses. Second, sampling is limited to a small number of high-tech enterprises in a specific industrial zone, and further studies should seek to verify the findings with different industries in different areas. Finally, this study considered only the constructive deviance of employees as a mediating variable between paternalistic leadership and innovation performance, but there may be other mediating variables with a significant effect that should be explored.

All authors were part of developing the measuring instrument. LL conceptualized this study, conducted the statistics, and wrote the manuscript. SW wrote the research methodology and constructive discussions. All authors contributed to the article and approved the submitted version.

This work has been supported by City College of Dongguan University of Technology, China. The Research Program is a Study on the Mechanism of Employee Innovation Performance in the perspective of open innovation (No. 2020YZDYB05R).

The authors sincerely appreciate the editor and reviewers for their time and valuable comments.

Wu, K., and Zhang, Z. (2018). The effect of paternalistic leadership on the turnover intention of employees: mediated by organizational identification. Stud. Psychol. Behav. 16, 557–562.

Citation: Li L and Wang S (2021) Influence of Paternalistic Leadership Style on Innovation Performance Based on the Research Perspective of the Mediating Effect of the Constructive Deviance of Employees. Front. Psychol. 12:719281. doi: 10.3389/fpsyg.2021.719281

Copyright © 2021 Li and Wang. This is an open-access article distributed under the terms of the Creative Commons Attribution License (CC BY). The use, distribution or reproduction in other forums is permitted, provided the original author(s) and the copyright owner(s) are credited and that the original publication in this journal is cited, in accordance with accepted academic practice. No use, distribution or reproduction is permitted which does not comply with these terms.

Understanding Startups From Idea To Market