Creativity is considered to be one of the core skills of the 21st century (e.g., Gajda et al., 2017; Shin and Jang, 2017), and has been noted to be a crucial human asset necessary to deal with complex reality effectively (Corazza, 2017). Creativity is generally defined as the ability to generate new and appropriate ideas (Feist and Barron, 2003; Boden, 2004). Creativity is particularly important for college students, which is considered to be one of the necessary skills for them (e.g., Lai and Viering, 2012; Podolsky and Pogozhina, 2017; Tirri et al., 2017).

Science, Technology, Engineering, Art, Mathematics (STEAM) education, as a popular pedagogical approach to teaching, seems to have the potential to improve the creativity of students (Liliawati et al., 2018). STEAM education can be defined as “education for increasing students' interest and understanding in scientific technology and for growing STEAM literacy based on scientific technology and the ability to solve problems in the real world” (Kofac, 2017, p. 3). STEAM education combines the arts with the STEAM subjects to increase engagement, creativity, innovation, and problem-solving skills of students (e.g., Liao, 2016; National Art Education Association [NAEA], 2016), which was able to inspire learners to become more different and to be creative thinkers (Liliawati et al., 2018). Furthermore, STEAM education can make students feel at ease, can help them understand the subject and apply it to daily life (Yakman and Lee, 2012).

One of the vital factors that appear to have the potential to influence creativity is the formative feedback of teachers (Calavia et al., 2021). “Feedback” was first applied in the fields of electronic technology and machine control, and later gradually promoted in the social sciences such as psychology and biology. In the mid-20th century, the American psychologist Skinner first proposed “procedural teaching” and pointed out that the core of procedural teaching is immediate feedback, that is after students answer questions, they should be told whether the result is correct or not in time (Rinvolucri, 1994). In the field of teaching, feedback means that in the process of teaching, teachers compare the current behavior and performance of students with the set teaching objectives and then provide students with the feedback information, so that students can improve, change, or rebuild their knowledge system according to the feedback information received (Winne and Butler, 1994). The reinforcement theory holds that reinforcement is an important reason for the change of individual behavior (Skinner, 1957; Soh, 2017). For students, the feedback received in the teaching process is the most important influencing factor in the learning process and is also the core of effective learning (Hattie and Timperley, 2007; Hattie, 2008).

We used the Eugene Creativity Scale, which was compiled by Princeton Innovation Talent Research Company and has verified have good reliability and validity by domestic scholars in practice (e.g., Zhu et al., 2011; Wang, 2016). The scale includes 50 items, the first 49 items (e.g., “I do not do blind things, that is, I always have a target in mind, with the right steps to solve every problem.”) were single-choice questions of the three choices (e.g., “yes,” “no,” and “I am not sure”). The 50th is a multiple-choice question, with a total of 54 alternative words, of which only 23 words have positive weight and the rest are selected with a weight value of 0.

This experiment was a mixed experimental design of 3 (feedback type: teacher opinions feedback, teacher suggestion feedback, and non-feedback) ×3 (course time: the first course, the second course, and after the third course). Feedback type was the between-subjects variable, the participants were randomly assigned to the teacher opinions feedback group, the teacher suggestions feedback group, or the non-feedback group. The dependent variable was the creativity of participants which was measured by the total score on the Eugene Creativity Test. 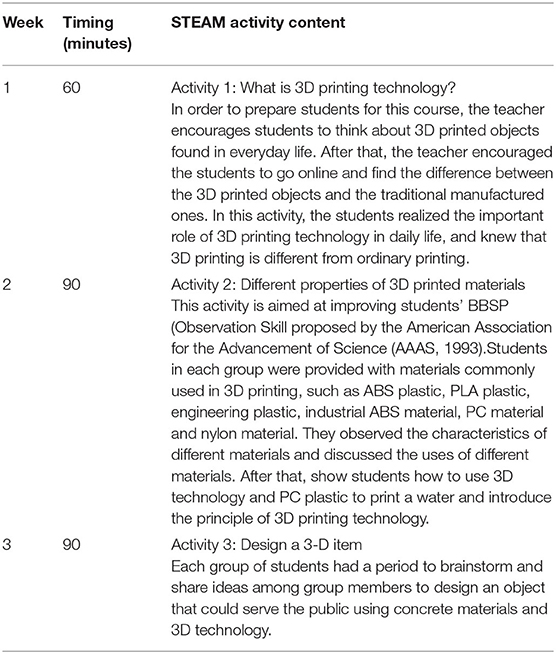 Table 1. The procedure of the proposed STEAM activity.

Analysis of Variance for Pretests of Three Different Feedback Groups

ANOVA of Teacher Feedback Type and Course Time on Creativity The present study showed that in STEAM education, the suggestion feedback of teachers promoted the creativity of students, which was consistent with the opinions of the previous studies. Studies showed that creativity is learned by the practice (Root-Bernstein, 2015), and teachers should shape the creative behavior by supporting the feedback (e.g., Cropley, 1995; Sternberg and Williams, 1996; Runco, 2014). In addition, the present study was consistent with the reinforcement theory. According to the reinforcement theory of Skinner, the behavior changes because of the reinforcement and the control of reinforcement is the control of behavior (Skinner, 1957). For learners, the feedback they receive during a course is one of the most powerful influences on their learning process (Hattie and Timperley, 2007) and central to effective learning development (Sadler, 1989). Based on a meta-analysis of more than 7,000 studies on teacher feedback in real classroom situations, Hattie and Timperley (2007) showed that the most effective feedback is to provide clues or reinforcement for the learners, associated with the correct behavior or other criteria related to the task completion. In addition, the exploratory studies of the teacher feedback in online collaborative writing tasks have shown that the learners can improve their learning if the feedback includes suggestions and questions, rather than just direct corrections.

The present study has several limitations. First, using only one creativity scale as a measure of creativity may cause the results to lack ecological validity. Future research could add other creative tasks to validate this experiment (e.g., open-ended realistic problem; Pi et al., 2019). In addition, in the process of the teaching process, the feedback of the students may also affect the results of this experiment. Future studies should examine the confounding factor to expand the understanding of the effects of teacher feedback on creativity.

This study has important theoretical significance for developing the development of an effective STEAM model. For STEAM education to develop into an effective teaching method, research is needed to understand what STEAM means in practice. Though researchers posit that STEAM education is an effective pedagogy for enhancing creativity, few empirical studies were conducted to support this notion. In addition, riches of studies indicated that arts education enhances cognitive and academic ability, whether these benefits can be transferred to STEAM education remains unclear (Perignat and Katz-Buonincontro, 2019). The present study provided evidence for the view that STEAM education is a model for enhancing creativity. In addition, this study has an important practical significance for expanding the research field of teacher feedback and creativity. Studies have examined the associations between teacher feedback and critical thinking and revealed a positive relationship between them (e.g., Pedrosadejesus et al., 2014; Liwen and Liu, 2018). However, few studies have examined the relationship between teacher feedback and creativity. To date, this is the first attempt to examine the relationships between teacher feedback and creativity under the background of STEAM education. Furthermore, this study is of great practical signicance in improving the creativity of the students. For example, in the process of STEAM teaching, we need to strengthen the suggestion feedback of teachers to promote the improvement of the creativity of students.

This research was approved by the Ethics Committee of the College of Educational Science and Technology of Northwest Minzu University. All participants were volunteers who provided written informed consent, and they were told they could quit the experiment at any time if they didn't want to go on.

SS, SW, and YW proposed the original thoughts and conducted the experiments. YQ and XY collected the data and completed the article revisions. All the authors were involved in the writing of the article and approved the submitted version.

This work was supported by Key Laboratory of Ethnic Languages and Information Technology of Ministry of Education of China, Northwest Minzu University, Lanzhou, Gansu, 730030, China (KFKT202013, KFKT202016, KFKT202012, and 1001161310). The Young Doctor Foundation of Higher Education in Gansu Province “Research on the educational effect mechanism of the socialist core value 'unity of knowing and doing' of college students for nationalities in the new era” (No.: 2021QB-071). The Ministry of Education-China Mobile Scientic Research Fund 2018 Project research on the effective mechanism and promotion strategy of promoting the balanced development of compulsory education by using three classrooms (No. MCM20180612). Fundamental Research Funds for the Central Universities “Research on influencing factors of online education in post-epidemic era” (No.: 31920210125).

Fahim, M., and Zaker, A. (2014). EFL learners' creativity and critical thinking: are they associated? Hum. Lang Teach. Retrieved from: http://www.hltmag.co.uk/jun14/mart01.htm

Kofac (2017). Concept and definition of STEAM. Seoul: The Korea Foundation for the Advancement of Science and Creativity—KOFAC.

Copyright © 2021 Shen, Wang, Qi, Wang and Yan. This is an open-access article distributed under the terms of the Creative Commons Attribution License (CC BY). The use, distribution or reproduction in other forums is permitted, provided the original author(s) and the copyright owner(s) are credited and that the original publication in this journal is cited, in accordance with accepted academic practice. No use, distribution or reproduction is permitted which does not comply with these terms.

Creativity and Innovation in STEAM Education