Performance in soccer has been shown to rely on movements such as sprinting, passing, shooting, jumping, and change of direction (Lepschy et al., 2021; Longo et al., 2021). Considering the short duration and maximal effort characterizing these movements, it was not surprising that the Wingate anaerobic test (WAnT), an all-out 30-s test on a cycle ergometer, was widely used to evaluate performance in this team sport (Chtourou et al., 2019; Bahenský et al., 2020). The most popular index of the WAnT has been the peak power expressed either in absolute (Ppeak) or relative to body mass values (rPpeak). Ppeak was related largely with linear and non-linear sprint performance and moderately with 20-m sprint performance, and could differentiate soccer players among playing positions (Joo and Seo, 2016; Nikolaidis et al., 2016; Almansba et al., 2019). Nevertheless, performing the WAnT might be contraindicated during congested fixture periods or periods of intense training (Freitas et al., 2021). In such periods, additional exercise testing fatigue would be undesirable considering that WAnT might lead to blood lactate concentration higher than 11 mmol.L–1 in soccer players (Keir et al., 2013; Thom et al., 2020) and athletes of other sport (Jemni et al., 2006), and the use of surrogate measures of short-term muscle power might be an alternative.

The force–velocity (F-v) test, eliciting maximal power either in W (Pmax) or W.kg–1 (rPmax), was also performed on a cycle ergometer; however, compared to the WAnT that used 30-s continuous exercise, it lasted a similar total duration, but included a series of sprints separated by 5 min of recovery (Vandewalle et al., 1985; Aloui et al., 2020). The intermittent protocol of the F-v test might explain the relatively low post-test blood lactate values reported in the literature, e.g., 3.5 mmol.L–1 (Sanchez et al., 2012), ∼6.5 mmol.L–1 (Bouhlel et al., 2010), and ∼7.5 mmol.L–1 (Blonc et al., 1998). In addition to Pmax and rPmax, the F-v test provided two other indices, namely theoretical maximal force (F0) and velocity (v0) (Jaafar, 2017). Moreover, the F-v test has been used less often than WAnT in the evaluation of soccer players (Ben Ayed et al., 2011; Hammami et al., 2019). In this context, considering the importance of short-term muscle power for soccer performance, it would be interesting to examine the relationship of Ppeak and rPpeak of the WAnT with indices of the F-v test.

Although the abovementioned studies enhanced our understanding of the metabolic demands of the WAnT and F-v test, little information has been available about their relationship, and particularly, about the possibility to predict Ppeak and rPpeak from F-v characteristics (i.e., Pmax, rPmax, F0, and v0). Such information would be of great practical use for coaches and trainers working with soccer players to monitor performance, especially during periods of intense training and competition; if the prediction of Ppeak and rPpeak from F-v characteristics was possible, the F-v test as a less “lactic” exercise test, and consequently, inducing less fatigue, could be an alternative to the WAnT for the evaluation of Ppeak and rPpeak (Bouhlel et al., 2010; Keir et al., 2013). Therefore, the aim of this work was to (a) develop a prediction equation of Ppeak and rPpeak in soccer players, (b) examine the validity of this equation and its variation by performance level of rPpeak. The research hypothesis was that the development and validation of prediction equations would be possible considering the affinity of the WAnT and F-v test in terms of metabolic demands and mode of motion (Driss and Vandewalle, 2013).

Participants were 158 adult men soccer players of soccer clubs of regional level (i.e., from the third, fourth, and fifth national league; sport experience 11.4 ± 4.5 years, mean ± standard deviation, approximately five weekly training units, age 22.6 ± 3.9 years, body mass 74.8 ± 7.8 kg, and height 178.3 ± 7.8 cm) who performed both WAnT and F-v test. An experimental (EXP, n = 79) and a control group (CON, n = 79) were used for the development and validation of prediction equation, respectively, of Ppeak and rPpeak from F-v test. All participants provided informed consent after having been presented the benefits and risks of their participation in the present study.

A weight scale (HD-351 Tanita, Illinois, United States) measured body mass (in the nearest 0.1 kg), a portable stadiometer (SECA, Leicester, United Kingdom) height (0.1 cm), and a caliper (Harpenden, West Sussex, United Kingdom) skinfolds (0.5 mm), respectively. Body mass index (BMI) was calculated as the quotient of body mass (kg) to height squared (m2). Body fat percentage (BF) was estimated from the sum of 10-skinfolds (cheek, wattle, chest I: pectoral, triceps, subscapular, abdominal, chest II: between the anterior axillary fold and the nipple, suprailiac, thigh and calf; BF = −41.32 + 12.59 × logex, where x is the sum of 10 skinfolds) (Eston and Reilly, 2009). Fat mass and fat-free mass were calculated using the formulas “body mass × BF/100′”and “body mass – fat mass,” respectively. The F-v test was employed to assess Pmax, rPmax, F0, and v0. This test employed various braking forces eliciting different pedaling velocities to evaluate the F-v relationship (Vandewalle et al., 1985; Aloui et al., 2020). The participants performed four sprints, each one lasting 7 s against incremental braking force (2, 3, 4, and 5 kg) on a cycle ergometer (Ergomedics 874, Monark, Sweden), interspersed by 5-min recovery periods. The WAnT was administered in the same ergometer as the F-v did (Dotan and Bar-Or, 1980; Miller, 2020). Briefly, participants were asked to pedal as fast as possible for 30 s against a braking force that was determined by the product of body mass in kilograms by 0.075. Both WAnT and F-v test have shown excellent intraclass correlation coefficient (>0.98) (Ingle and Tolfrey, 2013).

Table 1. Training, anthropometric and physiological characteristics in the total sample of participants (n = 158) and by quintiles of relative peak power of the Wingate anaerobic test. 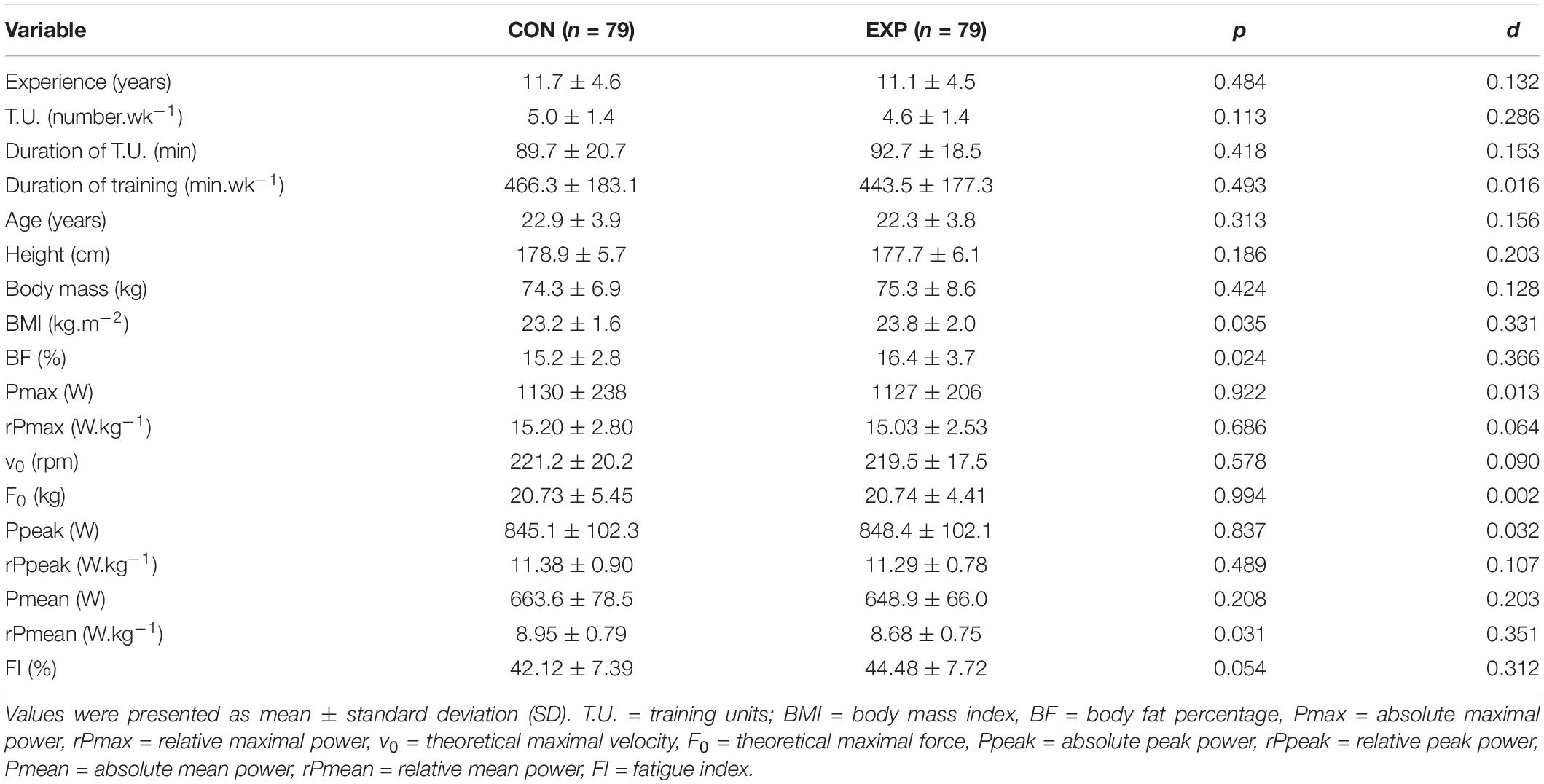 Table 2. Training, anthropometric, and anaerobic characteristics in the experimental and control group.

Table 3. Summary of regression analysis in the experimental group (n = 79).

The large correlation between Ppeak and Pmax, and rPpeak and rPmax highlighted the possibility to use WAnT and F-v test interchangeably considering the short-term duration and need for maximal effort of both tests (Driss and Vandewalle, 2013). In addition, the larger values of Pmax and rPmax than Ppeak and rPpeak were in agreement with previous studies using both the tests (Jemni et al., 2006; Souissi et al., 2008; Ingle and Tolfrey, 2013). An explanation of this difference might be that the highest power output in the F-v test was estimated, whereas it was measured in the WAnT at a given braking force (which was set considering each participant’s body mass).

Comparing the predictors of Ppeak and rPpeak, it was observed that different anthropometric and F-v characteristics played a predicting role in each case. The best predictor of Ppeak was body mass highlighting the relationship of muscle power with human size (Bahenský et al., 2020; Taketomi et al., 2021). Previously, it was shown that rPpeak was related with 5 m, 30 m sprint times, maximal voluntary isometric contraction of the knee extensors, half squat repetition maximal and countermovement jump height in soccer players (Boraczyński et al., 2020), performance of short and maximal effort that might be evaluated by the F-v test. Comparing the prediction models of Ppeak and rPeak, it was observed that the coefficient of determination was higher for the absolute than for the relatively score of peak power. Peak power related very largely with body mass, and consequently, since body mass was partitioned out in rPpeak, a weaker model was shown for the relative score of peak power.

A limitation of this study was that the findings referred to specific performances in the selected anaerobic tests. Since the bias was larger in low and high anaerobic performances, caution would be needed to generalize the developed prediction equations to other populations. However, there was large interindividual variability in the agreement between the actual and the predicted scores; thus, the use of the developed equations to predict Ppeak and rPpeak should be avoided when precision at an individual level would be needed in soccer players with small interindividual variation. On the other hand, the developed equations provided a practical tool to coaches and trainers to predict the average Ppeak and rPpeak of a group of athletes from their F-v test. Accordingly, the F-v test might be considered as a diagnostic tool of team instead of individual WAnT performance. Future studies should examine the interchangeability of these tests in soccer players differing for sex, age, and performance level.

The findings of this work provided indirect estimates of the average Ppeak and rPpeak of the WAnT for a group of players that would be useful especially in periods when this test should not be applied considering the fatigue it causes. In this context, the F-v test can be considered as an alternative of exercise testing for the average Ppeak and rPpeak of a group of soccer players rather than for predicting individual scores when the interindividual variation of performance is small.

The studies involving human participants were reviewed and approved by the Institutional Review Board of EPL. The study was conducted according to the guidelines of the Declaration of Helsinki. The patients/participants provided their written informed consent to participate in this study.

Copyright © 2021 Nikolaidis and Knechtle. This is an open-access article distributed under the terms of the Creative Commons Attribution License (CC BY). The use, distribution or reproduction in other forums is permitted, provided the original author(s) and the copyright owner(s) are credited and that the original publication in this journal is cited, in accordance with accepted academic practice. No use, distribution or reproduction is permitted which does not comply with these terms.