The Impostor Phenomenon Among Nursing Students and Nurses: A Scoping Review

The impostor phenomenon (IP) refers to a false internal experience of low intelligence or ability that is associated with anxiety, depression, psychological distress, and burnout. The emotions associated with the IP affect not only personal mental health but also patient care. To address this issue, we need to completely understand the prevalence of and factors related to the IP and ways to resolve/overcome IP feelings. The aim of this scoping review was to identify the existing evidence regarding the IP among nursing students and nurses and determine gaps that can be addressed in future research. We conducted our study based on the scoping review methodological framework proposed by Arksey and O’Malley (2005) and advanced by Levac et al. (2010). After searching the Embase, PubMed, Cumulative Index to Nursing and Allied Health Literature (CINAHL), Cochrane Library, Web of Science and ProQuest databases, we identified 11 studies for inclusion in this review. We found that while the IP exists in nursing students and nurses, clinical nurse specialist students and final-year nursing students are at significant risk of impostor behavior. We also found that research in the nursing field has focused on the prevalence of and factors related to the IP, but few studies have addressed ways to resolve/overcome IP feelings. Thus, research in this area should be increased. This scoping review presents research gaps that may serve as a starting point for future work on the IP in the nursing field.

The impostor phenomenon (IP), which is a concept that was proposed by Clance and Imes (1978), refers to “a false internal experience of low intelligence or ability.” A literature review indicates that many studies have shown that the IP exists in different populations, such as managers, resident physicians, and medical students (Rohrmann et al., 2016; Villwock et al., 2016; Gottlieb et al., 2020), but that it is also common among nursing students and nurses (Christensen et al., 2016; Gill, 2020). While the IP has been well described in other fields, research on IP in the nursing field is limited, with available studies focusing primarily on the universality of the IP (Gómez-Morales, 2021).

Our review involved two research questions: (a) What evidence is there to identify, assess, and resolve/overcome the IP among nursing students and nurses? (b) What are the gaps in the evidence base? Our main concerns were the prevalence of the IP among this population, its related factors, assessment tools for identifying it, and methods and techniques for resolving or overcoming impostor feelings.

While we applied the scoping review methodology proposed by Arksey and O’Malley (2005) and advanced by Levac et al. (2010), we did not perform the sixth step, i.e., consultation, because we studied the literature on the IP among nursing students and nurses and, thus, did not involve other stakeholders’ views on this issue.

Two researchers who have extensive evidence-based knowledge and who have each participated in systematic review searches many times searched the following databases: Embase, PubMed, CINAHL (EBSCO), Cochrane Library, Web of Science, and ProQuest. The following search terms were used: impostor syndrome/imposter syndrome/impostor phenomenon/imposter phenomenon/impostorism/imposterism and nurse*/nursing personnel/registered nurses/registered nurse*. The search time was limited to the time between establishment of the database and 17 March 2021. The language was limited to English. See Appendix 1 for the Ying Peng’s search strategy of the PubMed database. After the search was completed, we read the reference list of each article and found no new relevant articles. In addition, we discussed and identified four common core journals. Keywords in these journals were manually searched to identify missing documents, and no new documents were found.

The literature inclusion criteria were as follows: (a) nursing students or nurses as the research subjects, (b) original research, and (c) any type of research design. Studies whose subjects were healthcare attendees (HCAs) or certified nursing assistants (CANs/CNAs) were excluded. Documents that did not discuss IP or opinions or debate articles were also excluded. Two researchers independently screened the articles according to the inclusion and exclusion criteria. The screening method was based on a two-stage plan (title and abstract, full text). After individual screening, the results of the two researchers were compared to determine the final included literature. If a disagreement occurred in this process, the two researchers discussed the issue together to reach consensus. If consensus could not be reached, a third person was consulted. See the literature screening flow in Figure 1. 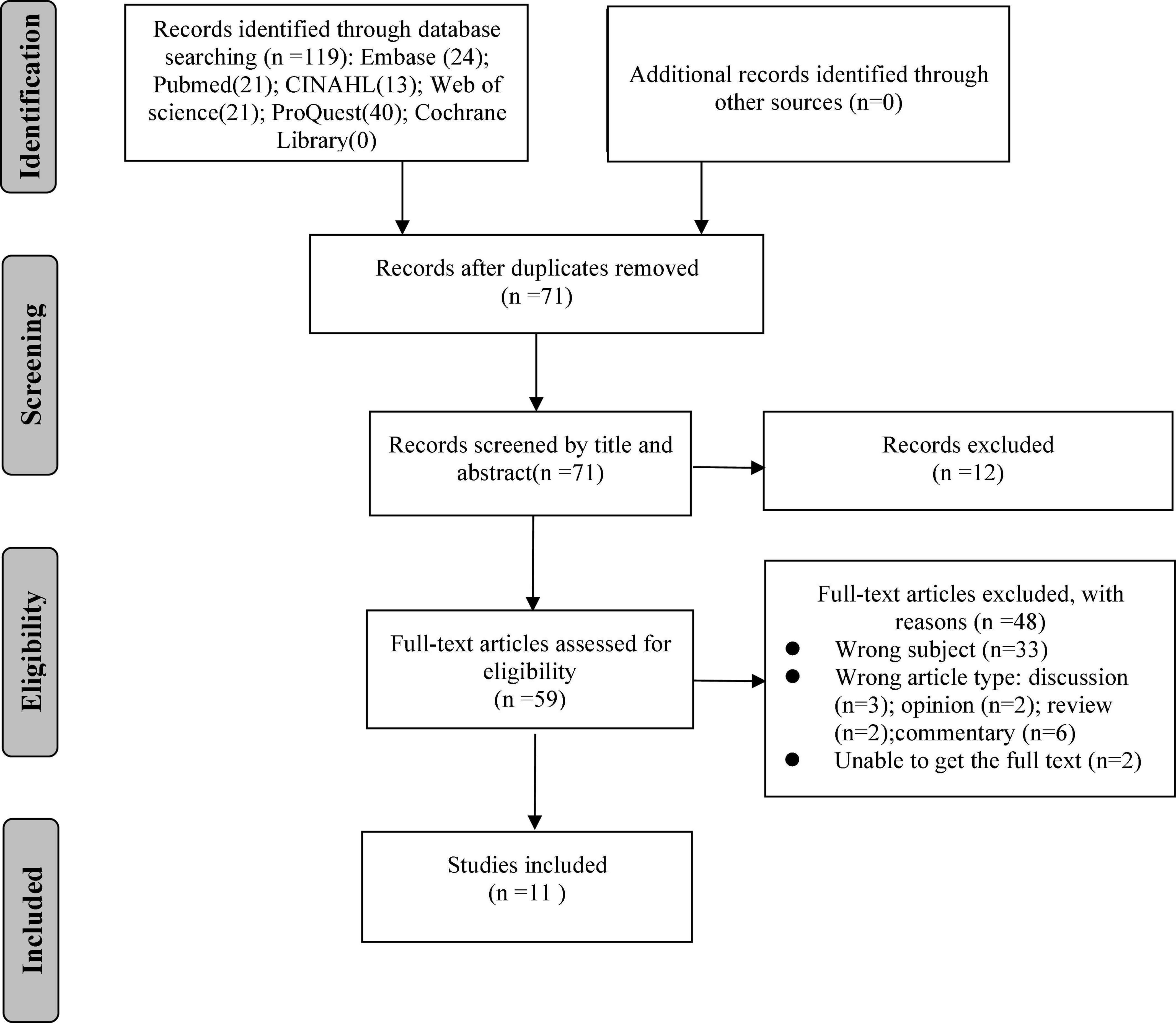 Collating, Summarizing, and Reporting the Results

We collated and summarized the research results and described them using two methods. First, the scope, nature and distribution of the included studies were summarized based on descriptive statistics. Second, we conducted a narrative review of the existing information on the aforementioned research questions. Our literature review results report is organized around these two approaches. 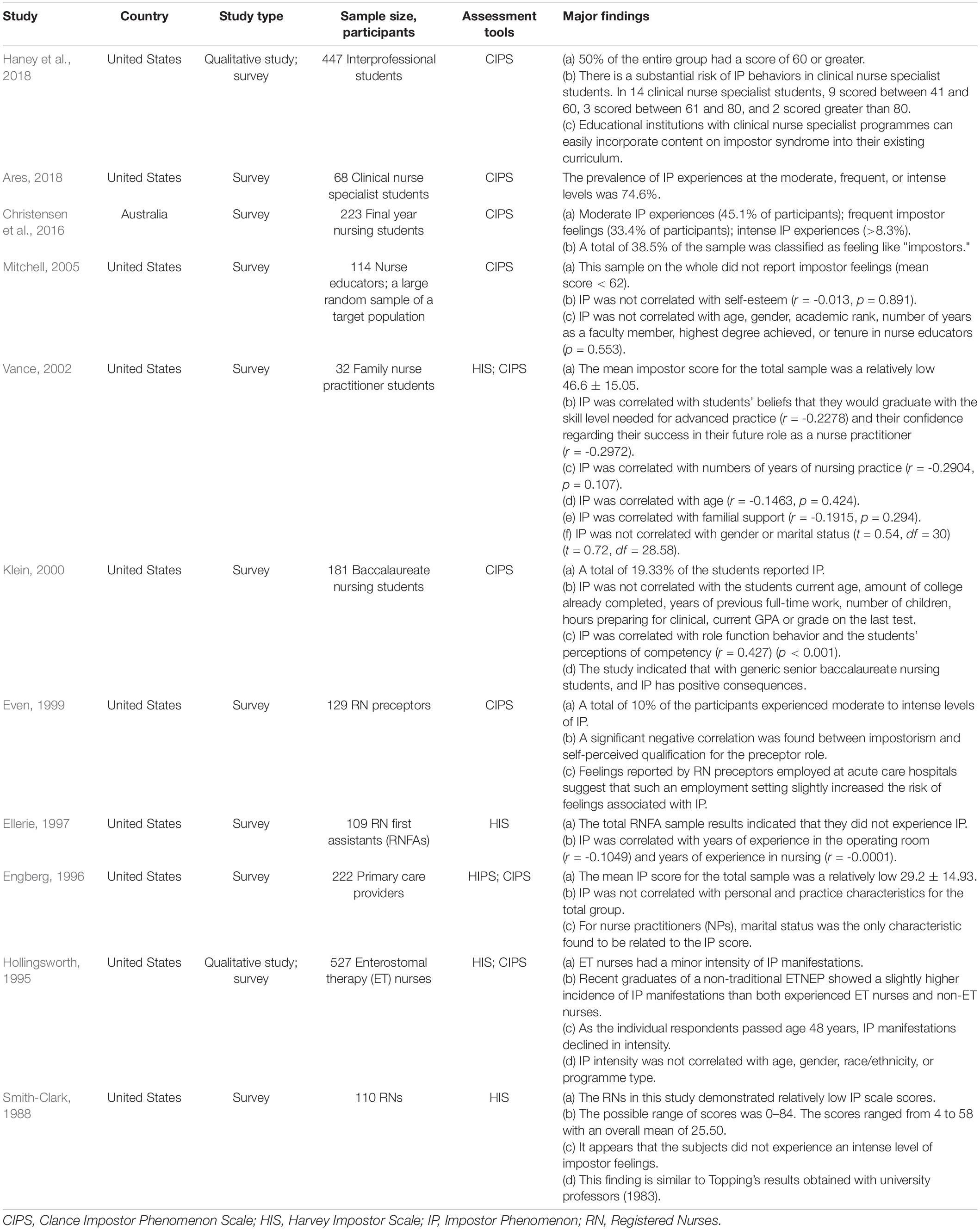 Prevalence of Impostor Phenomenon in the Population

Factors Related to Impostor Phenomenon in the Population

The initial view was that IP mostly occurred in successful women (Clance and Imes, 1978), but most nursing literature showed that the proportion of men and women experiencing IP was similar and that gender was not statistically significantly related to IP (Smith-Clark, 1988; Hollingsworth, 1995; Engberg, 1996; Ellerie, 1997; Vance, 2002; Mitchell, 2005). There is also controversy about race as a factor of IP. Studies outside the nursing field have suggested that race has a significant impact on IP, but two nursing field studies showed that race had no correlation with IP (Smith-Clark, 1988; Hollingsworth, 1995). Several studies have found that nursing students and nurses with low self-confidence and self-esteem have increased IP incidence.

Impostor phenomenon is considered a stable feeling (does not change over time or with situations), and IP can relate to mental health problems, such as depression, anxiety, and psychological distress (Henning et al., 1998; McGregor et al., 2008; Villwock et al., 2016; Bernard et al., 2017). Therefore, it is important to overcome impostor feelings. In our review, two studies suggested that individuals should be aware that IP is a normal experience at a certain stage and that their peers may also experience the same self-doubt (Hollingsworth, 1995; Studdard, 2002). Another study suggested that educational institutions with clinical nursing courses should incorporate IP content into their existing courses, conduct IP emotional education for students and establish mentoring relationships with students (Haney et al., 2018).

Our review highlights some gaps in the existing research. First, the gold standard for IP assessment has not yet been established. Karina et al. noted that this is affected by the conceptual clarity of the IP dimensions and the lack of psychometric data (Mak et al., 2019). The assessment of IP lacks uniformity, which seriously affects the comparison between studies and thus affects the drawing of broader conclusion. Although the CIPS is the most commonly used assessment tool for researchers, the current research has not determined its advantages over other tools. This seems to be a way forward. Future confirmatory research should determine the dimensions of IP to solve the conceptual clarification of structural dimensions and report necessary psychometric data.

Second, we found that the nursing field has given little attention to the IP. Research on the IP focuses primarily on the universality of IP in the population, and thus, little is known about the impact of different activities to overcome the experience of self-doubt and its consequences, a finding that aligns with the study results of Gómez-Morales (2021).

The findings with respect to gender and race as two factors related to the IP contradict those of previous studies. In our review, none of the research results indicated that gender and race are related to the IP. A possible reason is that in the majority of studies, the respondents’ gender and race were not balanced. For example, most of the study respondents were white women. Therefore, it is recommended that future research regarding the IP in the nursing field avoid this bias by expanding the sample size to verify whether the two factors are related to the IP. In addition, the IP has a negative impact on mental health, whereas the positive impact of the IP has received little attention, which is perhaps another research direction. Future research can also link IP-related factors with their impacts on mental health to explore how a specific factor regulates the IP and mental health and to understand how they, i.e., the specific factor, the IP and mental health, interact. We also found a paucity of intervention studies, although a study outside of the nursing field noted that systematic intervention is the only method that addresses the IP (Freeman and Peisah, 2021). Based on the related evidence of the factors influencing the IP, future studies should develop customized interventions specifically for the degree of the IP and explore the effects of those interventions on impostor feelings.

Research on resolving/overcoming impostor feelings has not been fully studied. In our review, only a few studies even mentioned methods for resolving/overcoming impostor feelings (Haney et al., 2018), and those methods have not received the attention they deserve. However, as many studies have found that the IP can cause mental health problems, such as depression, anxiety, low self-esteem, and psychological distress (Henning et al., 1998; McGregor et al., 2008; Villwock et al., 2016; Bernard et al., 2017), this is a call for future research to develop methods that will resolve/overcome impostor feelings at both the individual and institutional levels and to perform confirmatory research.

Finally, it is anticipated that future studies will consider these research gaps as starting points for future studies on the IP among nursing students and nurses.

The process of conducting this scoping review was subject to the following limitations. First, the review was performed without the cooperation of a librarian. Second, the research subjects were directly limited to the nurses and nursing students within the searches. In addition, we reviewed literature up to March 2021, and thus, any literature published after that date was not included.

This project was supported by the Special Fund for Postgraduate Innovation of Jiangxi Province (grant number YC2021-S181).

Special thanks to Clance’s Administrative Associate Andra Gailis for her guidance and help on the research of Impostor Phenomenon. At the same time, thanks to all authors for their hard work in this research.

Mitchell, F. A. (2005). A Study to Determine the Incidence and Relationship of Demographic Variables and Self–Esteem to the Impostor Phenomenon Among Nurse Educators. Unpublished Ph.D. Hattiesburg, MS: The University of Southern Mississippi.

Copyright © 2022 Peng, Xiao, Tu, Xiong, Ma, Xu and Cheng. This is an open-access article distributed under the terms of the Creative Commons Attribution License (CC BY). The use, distribution or reproduction in other forums is permitted, provided the original author(s) and the copyright owner(s) are credited and that the original publication in this journal is cited, in accordance with accepted academic practice. No use, distribution or reproduction is permitted which does not comply with these terms.