Longitudinal Relationship Between Self-Esteem and Academic Self-Efficacy Among College Students in China: Evidence From a Cross-Lagged Model

Furthermore, self-esteem has been confirmed to have a one-way impact on academic self-efficacy through promoting individuals’ initiatives (Lin et al., 2014). Self-esteem, as a perception of oneself, can bring in effects to the real world even the perception may not be correct (Robert and Lenore, 1968). Thus, the self-esteem of students is of great significance to their success, even their self-recognition may be exaggerated or undervalued. Self-esteem was considered to have relatively stable effects on fostering initiative and enhancing the sensation of pleasure for individuals (Baumeister et al., 2003). For instance, the extant empirical research has provided strong evidence that students’ self-esteem and academic achievement are positively related (Saadat et al., 2012; Arshad et al., 2015; Cvencek et al., 2018; Li et al., 2018). Moreover, self-esteem was found to exert an impact on people’s life satisfaction (Joshanloo and Afshari, 2011; Kong et al., 2012; Hawi and Samaha, 2017).

Hypothesis I: The self-esteem of Chinese college students can positively predict their subsequent academic self-efficacy over the four academic years.

Hypothesis II: Students’ academic self-efficacy had no lagged impact on their self-esteem.

Participants in this study were 2473 full-time students (1166 females and 1307 males) admitted into 15 public universities in 2008 at Beijing in China, belonging to different fields of specialization such as science and engineering, social sciences, and humanities. More detailed information on the data was elaborated in Gao et al. (2020, 2022) and Liu et al. (2019a,b). The Beijing College Students Panel Survey (BCSPS) followed these students over the four academic years and collected their information including their self-esteem and academic self-efficacy yearly. The dropouts in the sophomore, junior, and senior years accounted for 4.73, 5.34, and 9.42%, respectively, and there were no significant differences in a series of variables between the dropouts and the completers. For instance, the completers were not significantly different in academic self-efficacy levels from the dropouts of the second (t = −0.219, p = 0.827), the third (t = −0.656, p = 0.512), and the fourth year (t = −1.060, p = 0.289).

The academic self-efficacy of college students in this study was assessed with the 5 items of the Pattern of Adaptive Learning Scales’ (PALS) Academic Efficacy subscale, which estimated students’ perceptions of their academic competence (Midgley et al., 2000). Participants reported the extent to which they believed each item was true of them on a 1 (Not at all true) to 5 (Very true) scale, and their responses were summed to yield the global academic self-efficacy score ranging from 5 to 25. The reliability coefficient (α) of academic efficacy from the freshman to the senior year was 0.866, 0.853, 0.896, and 0.901, respectively, revealing good measurement reliability.

The 10-item Rosenberg self-esteem scale was widely adopted to measure general self-esteem (Rosenberg, 1965), which has been evidenced for the invariance of construct in the Chinese context, and this study used a 5-point Likert scale ranging from 1 (Strongly Disagree) to 5 (Strongly Agree). The internal consistency was satisfactory, with coefficients of scale reliability α varying from 0.878 to 0.887 during the four academic years.

On average, the score of academic self-efficacy among Chinese college students experienced a downward trend from 18.136 (SD = 4.372) in the freshman year to 17.267 (SD = 4.552) in the junior year, before rising slightly to 17.488 (SD = 4.157) in the senior year. Similarly, the mean scores of female and male students gradually declined from 17.72 (SD = 4.458) and 18.507 (SD = 4.261) to 17.445 (SD = 4.362) and 17.11 (SD = 4.711), respectively, in the first 3 years, after which they grew to 17.673 (SD = 3.956) and 17.322 (SD = 4.325) separately. Furthermore, male students scored higher in academic self-efficacy than females in the first 2 years, whereas the academic self-efficacy of female students surpassed their male counterparts in the latter 2 years, indicating that there existed gender differences in academic development. Additionally, the description of self-esteem for the sample may refer to previous research (Gao et al., 2022), which indicated that the average levels of self-esteem among both female and male students gradually declined over time, and female students had higher self-esteem than males.

The correlation analysis among the measures showed that the academic self-efficacy among college students, either females or males, was significantly positively associated with their levels of self-esteem both in the same academic year and across years (p < 0.01) (see Table 1). In addition, the academic self-efficacy in different years correlated positively (p < 0.01), and self-esteem of the 4 years also correlated strongly (p < 0.01). 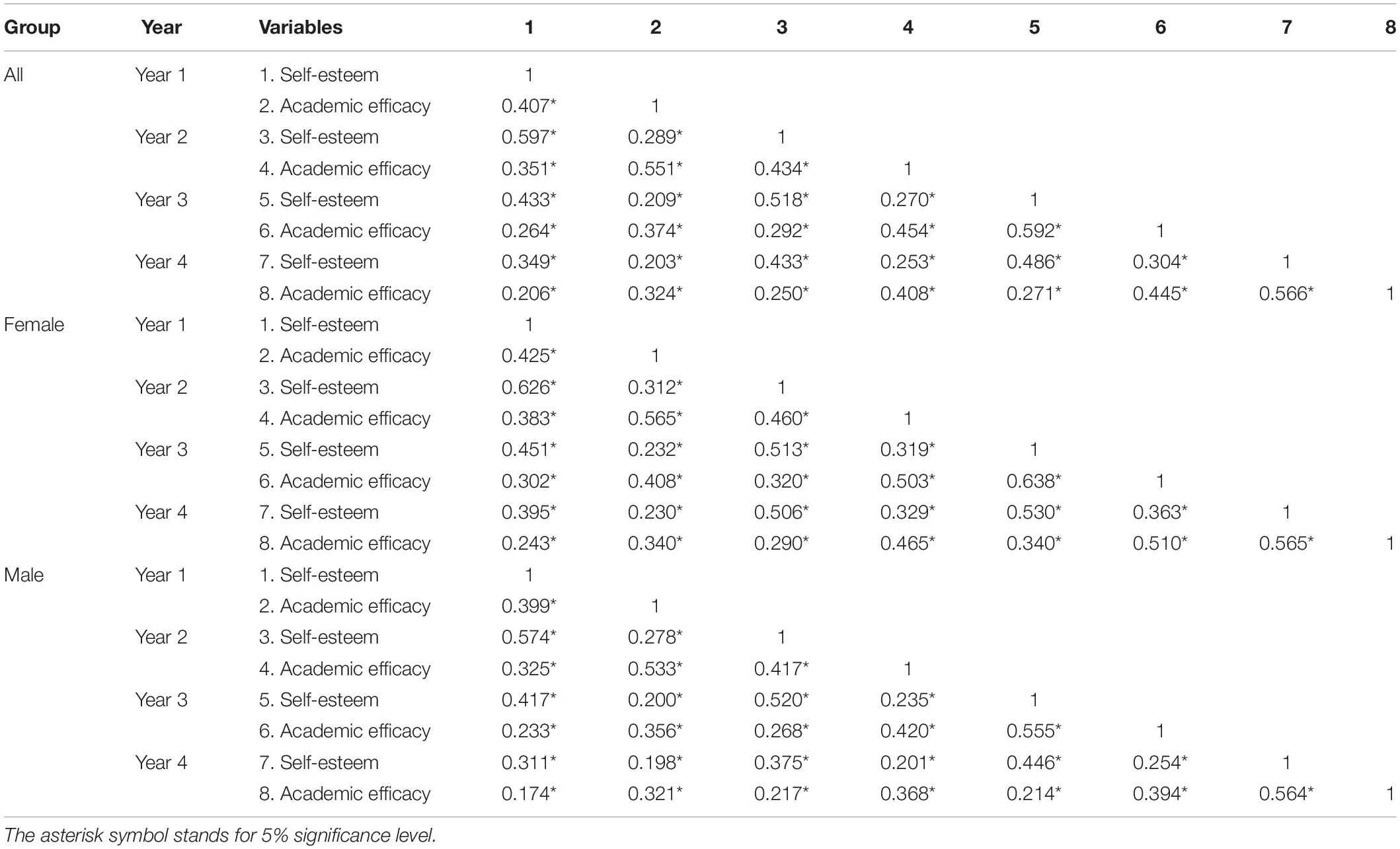 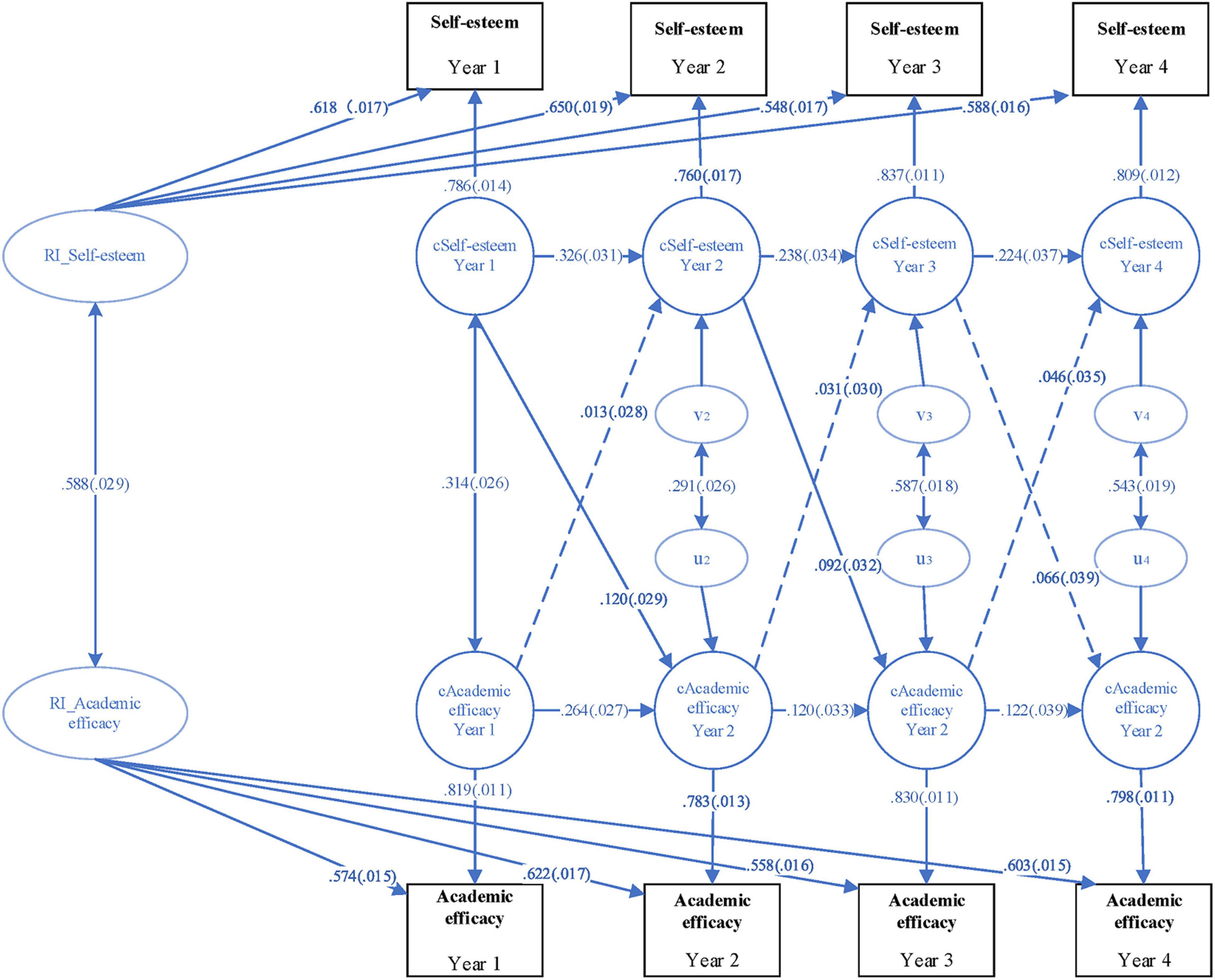 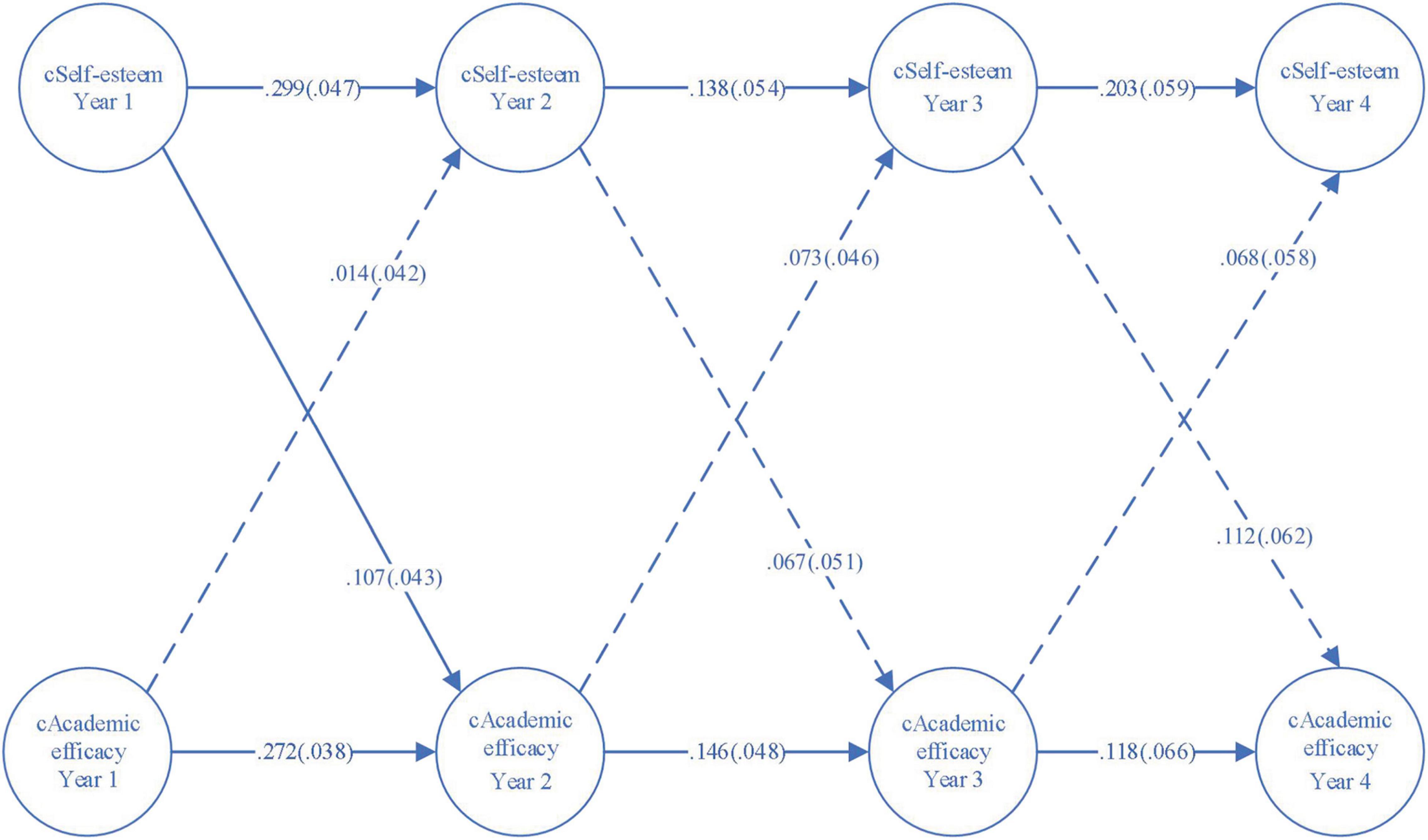 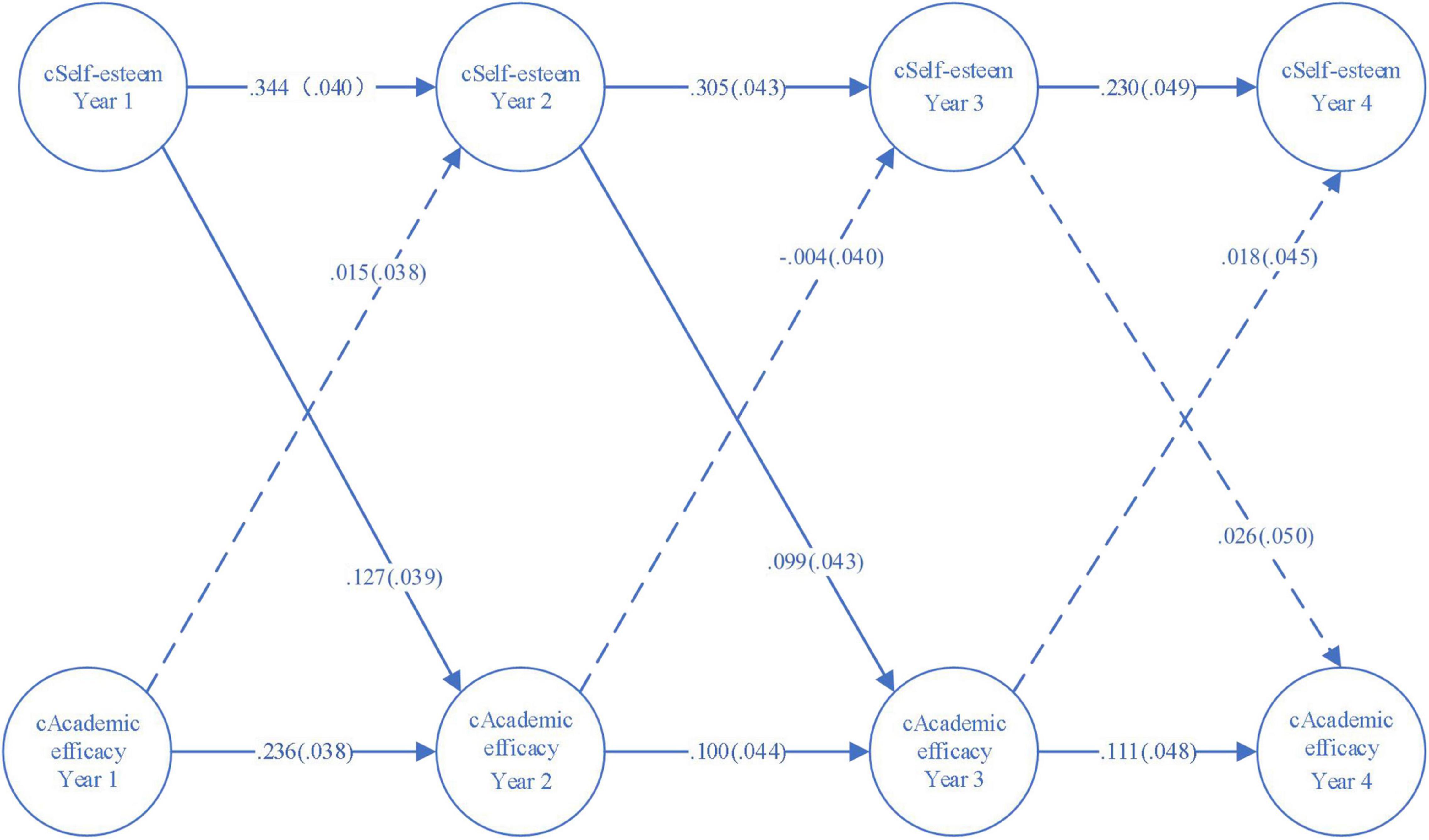 The findings of the present study facilitated a deeper understanding of the reciprocal relations between self-esteem and academic self-efficacy in the Chinese context. In particular, the four-wave cross-lagged design allowed us to recognize the heterogeneity of the effects across years. Generally, the majority of students enter colleges and universities after taking the National College Entrance Examination (NCEE), and students are usually required to obtain high scores in order to be admitted into their dream schools, which makes the examination of great significance (Ha et al., 2020). Under this circumstance, the exam-oriented patterns of education have been constructed for high school students since they need to make sufficient preparation for the NCEE (Chen and Zou, 2018). In this way, the self-esteem, as well as the academic self-efficacy of freshman students in college, may arise from their performance in NCEE. Meanwhile, considering the fact that most freshman students may still regard academic tasks as their priority in their first year at college by following similar learning modes at high school, their self-esteem and academic self-efficacy should be tightly associated. Nonetheless, the sophomore and junior students are confronted with more demanding tasks not only from the increasing difficulties in class, but also from other aspects such as the establishment of interpersonal networks, the engagement in social activities and internships; while the seniors have to prepare for their future after graduation, e.g., completing graduation thesis, preparing for the postgraduate entrance examination, or seeking jobs in the labor market. Therefore, students in the later years started to detach their self-esteem and academic self-efficacy to avoid possible academic failure, which was evidenced by prior research (Okech and Harrington, 2002).

Another implication of the results pertains to the gender differences in the prospective effect of self-esteem on academic self-efficacy. Our study found that the effect endured longer and stronger among male students, and the possible explanation for this finding is that high esteem among female students brings in not only efforts for academic progress, but also growing interests in making dress codes and wearing makeup (Tran et al., 2020).

Limitations of this study include the representativeness of the sample. The analysis of our study was based on the students in Beijing, which, as the capital of China, possesses the largest number of universities nationwide. Usually, students enrolled into universities in Beijing are required to score higher compared with those who entered universities of the same tier in other provinces. Thus, the conclusions should be cautiously generalized. In addition, the variables in this study were measured with self-reported instrument, which may result in common method bias.

Third, the self-esteem of college students consistently predicted their subsequent academic self-efficacy, though the effects weakened over time. There were gender differences in the prospective effects from self-esteem to academic self-efficacy, which endured longer and appeared to be stronger among male students compared with their female counterparts.

The data analyzed in this study is subject to the following licenses/restrictions: the data ownership belongs to the National Survey Research Center, Renmin University of China, Haidian, Beijing, China. The dataset has been used by many publicly published papers with its reliability verified. Researchers interested in this field can also contact the authors should there be any difficulties in data access for academic purposes. The authors will actively meet relevant needs to ensure the replicability and transparency of this study. Requests to access these datasets should be directed to XL, xinqiaoliu@pku.edu.cn.

Ethical review and approval were not required for the study on human participants in accordance with the local legislation and institutional requirements. The patients/participants provided their written informed consent to participate in this study.

YL and XL contributed to conception and design of the study. XL and WG undertook the statistical analysis. WG and YL managed the literature searches and analyses. WG, YL, and XL wrote the first draft of the manuscript. All authors contributed to manuscript revision, read, and approved the submitted version.

We would like to acknowledge and thank National Survey Research Center, Renmin University of China for the support in data collection.

Chen, R., and Zou, M. (2018). “Discussion on the relationship between exam-oriented education and quality-oriented education,” in Proceeding of the 2018 2nd International Conference on Education Innovation and Social Science (ICEISS 2018). (Atlantis Press), 350–353.

Harris, S. L. (2009). The Relationship Between Self-esteem and Academic Success Among African American Students in the Minority Engineering Program at a Research Extensive University in the Southern Portion of the United States. LSU Doctoral dissertations, 1726. Available online at: https://digitalcommons.lsu.edu/gradschool_dissertations/1726

Copyright © 2022 Luo, Gao and Liu. This is an open-access article distributed under the terms of the Creative Commons Attribution License (CC BY). The use, distribution or reproduction in other forums is permitted, provided the original author(s) and the copyright owner(s) are credited and that the original publication in this journal is cited, in accordance with accepted academic practice. No use, distribution or reproduction is permitted which does not comply with these terms.