Methods: A sample of 66 children with ASD aged 48 to 83 months were recruited. Measurements included the Assessment of Motor and Process Skills, the Developmental Test of Visual Perception—Third Edition, and Test of Visual-Perceptual Skills—Third Edition.

Autism spectrum disorder (ASD) is a lifelong developmental condition that can present challenges with a person’s performance skills (American Psychiatric Association, 2013). Research suggests that individuals with ASD experience problems related to sensory processing and motor skills, including issues with sensory integration, sensory over-responsivity (Green et al., 2011; Sanz-Cervera et al., 2019), balance problems, clumsy motor patterns, and poor performance in both gross and fine motor skills (Isabel, 2004; Lloyd et al., 2011; Stins and Emck, 2018; WHO, 2022). Difficulties in performance in these skills may relate to difficulties performing jobs in later life. Most cases of ASD are diagnosed at preschool age and have a lifelong impact, thus highlighting the need to explore the performance skills of individuals with ASD at a young age.

This study was a secondary analysis of data from the research carried out by Chi and Lin (Chi and Lin, 2020). A sample of 66 young children with ASD (aged 48–83 months old) were recruited from a medical center in Tainan, Taiwan. The majority of the sample were boys (86.4%), with a mean age of 62.9 months. Most children were aged 60–71 months (60.6%), followed by 48–59 months (30.3%), and 73–83 years (9.1%). The children had been diagnosed with ASD by registered pediatric psychiatrists according to DSM-5 criteria (American Psychiatric Association, 2013) and had an average score of 33.5 (SD = 2.2) on the Standard Version of Childhood Autism Rating Scale—Second Edition (Schopler and Al, 2010). Their cognitive ability ranged from mild to superior levels [intelligence quotient (IQ) of 67 to 127] on the Wechsler Preschool and Primary Scale of Intelligence, with the mean score of the IQ at 85.6 (SD = 18.5). About 14.8% of the participants had an IQ score lower than 70. The sample characteristics, self-care, and partial visual perception data from these children with ASD have been reported previously (Chi and Lin, 2020).

The AMPS is an objective, standardized, observation-based self-care measurement (Fisher and Jones, 2012). The AMPS includes normative data for various population groups and is recommended for use with any person over the age of two years with any functional limitation. Activities of daily living (ADL), including self-feeding, dressing, personal hygiene, grooming, and bathing, were used to assess the quality of self-care performance in young children by a trained and certified rater. The scoring consists of ADL motor skills and ADL process skills. The score for each unit ranges from 1 (severely deficit performance) to 4 (competent performance). By using the AMPS computer software, the motor and process skills scores for each child were calculated. The AMPS log-odds probability unit (logit) scores can be compared to the normative range of self-care abilities typically seen among healthy individuals of the same age (Fisher and Jones, 2012). Cut-off scores of 1.5 logits on motor skills and 1 logit on process skills were indicated for determining the need for assistance (Merritt, 2011). Higher logits represent more competent self-care performance. The AMPS shows good reliability and validity (Fisher, 1993; Merritt, 2011).

The DTVP-3 is a standardized measure to evaluate the motor-reduced visual perception, visual-motor integration, and general visual perception performance of children between the ages of 4 and 12 years (Hammill et al., 2014). This study used the visual-motor integration (VMI) section of the DTVP-3, which consists of copying and eye-hand coordination tasks. Scaled scores, percentile rank, and age equivalent scores can be generated by age norms. The VMI composite scores, age-based standardized scores with a mean of 100, were used for data analysis. Higher scores indicate better VMI performance. The DTVP-3 has good reliability and criterion validity (Hammill et al., 2014). Based on the DTVP-3 test manual, the mean VMI composite score for children with ASD is 90 (Hammill et al., 2014).

This study was approved by the Institutional Review Board of National Cheng Kung University Hospital. The details of the procedures have been described previously (Chi and Lin, 2020).

This study used the logits of the AMPS, the VMI composite scores of the DTVP-3, and the subtest scaled scores of the TVPS-3. SPSS 22.0 was used to analyze descriptive statistics for study variables. Pearson correlation matrices were used to examine the relationship between self-care, visual-motor integration, and the visual perception subtests. The motor-free visual perception subtests were selected for inclusion in stepwise multiple regression analysis to determine the extent of the relationship among variables. A F-to-Enter significance level to be less than the 0.05 level and a F-to-Remove significance level to be greater than the 0.10 level were conducted. The method outlined by Hayes (2012) was followed to examine whether motor-free visual perception was a mediating variable that could account for the relationship between self-care and visual-motor integration. Analyses using Sobel’s test (Preacher and Hayes, 2004) were used to test the mediation effect. The level of significance was set at p < 0.05. 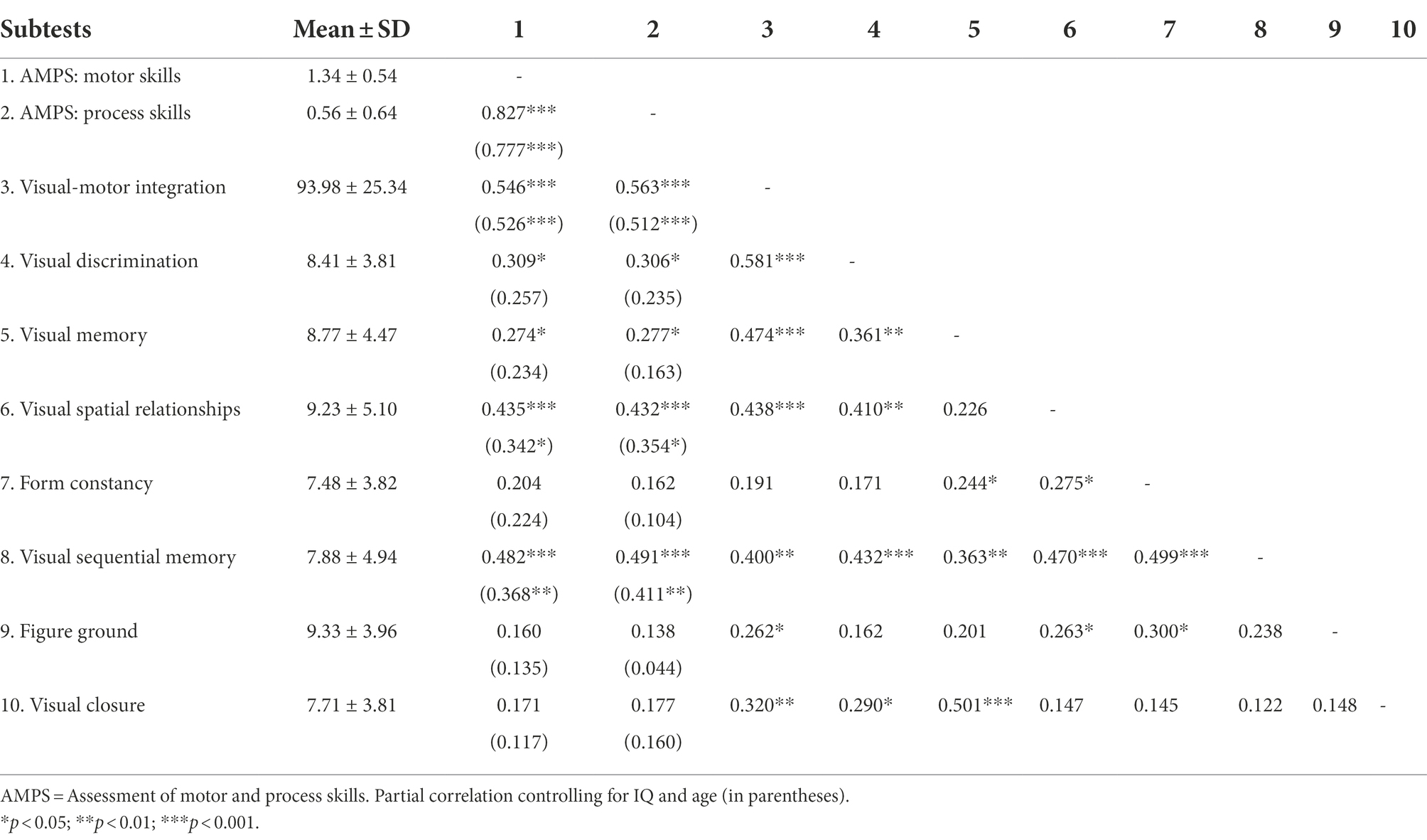 Figure 1. (A) and (B) Results of testing for mediation by sequential memory on relationship between visual-motor integration and self-care performance.

According to previous studies, visual discrimination, visual memory, visual sequential memory, figure-ground, visual closure, and visual-motor integration are significantly related to self-care performance (Parush et al., 1998; Boyd and Dawson, 2000; Jasmin et al., 2008; Elbasan et al., 2011; James et al., 2015). Consistent with the previous findings, visual discrimination, visual memory, visual sequential memory, and visual-motor integration were found to relate significantly to self-care performance in young children with ASD. The main differences from previous studies were that figure-ground and visual closure had no significant correlations with self-care, and that visual spatial relationships ability was significantly related to self-care performance in children with ASD. These findings suggest that, when performing self-care tasks, the processing of visual information and the skills and strategies used by young children with ASD are critical. For instance, visual spatial relationships have been shown to be correlated with the performance of self-care in patients with dementia (Marquardt et al., 2011; Bouchard et al., 2013). This is because a better recognition of the spatial and item layout within the environmental surroundings results in better self-care performance.

The studies involving human participants were reviewed and approved by the Institutional Review Board of National Cheng Kung University Hospital. Written informed consent to participate in this study was provided by the participants’ legal guardian/next of kin.

L-YL conceptualized and designed the study, coordinated and supervised the data collection and coordinated funding acquisition, methodology, project administration, and supervision. I-JC and Y-SS performed the statistical analyses, drafted the initial manuscript, and taken responsibility for the paper as a whole. All authors contributed to the article and approved the submitted version.

We express our gratitude to the children, their caretakers, and all the clinical staffs from the Center of Team Evaluation for Children’s Development at National Cheng Kung University Hospital.

Kurtz, L. A. (2006). Visual perception problems in children with AD/HD, autism, and other learning disabilities: a guide for parents and professionals. London; Philadelphia: Jessica Kingsley Publishers.

Copyright © 2022 Lin, Chi and Sung. This is an open-access article distributed under the terms of the Creative Commons Attribution License (CC BY). The use, distribution or reproduction in other forums is permitted, provided the original author(s) and the copyright owner(s) are credited and that the original publication in this journal is cited, in accordance with accepted academic practice. No use, distribution or reproduction is permitted which does not comply with these terms.