A dual-band microstrip patch antenna (MPA) based on a polarization conversion metasurface structure was designed. By etching the complementary split ring resonator (CSRR) on the ground plane, a new resonance frequency is generated. The proposed antenna is obtained through optimizing the structural parameters of CSRR. Compared with the antenna without CSRR, the return loss of the proposed antenna increases by ~40% at the original resonance frequency. The measured results are similar to the simulated results, verifying the reliability of the antenna. This work introduces a new way of designing multi-band antenna.

An antenna plays an important role in modern wireless communication systems. In recent years, the miniaturization and multi-functionalization of communication devices require that the internal antenna has strong integration capabilities [1, 2]. Meanwhile, owing to the lack of wireless spectrum resources, the demand for multi-band antenna has increased [3–5]. Microstrip patch antenna (MPA) are extensively used due to their advantages of small size, simple structure, low cost, and ease of integration [6, 7]. Many methods have been studied to obtain multi-band antenna, such as coupling feed technologies [8], slot-loaded technologies [9], and reconfigurable technologies [10, 11]. Unfortunately, these methods require complex calculation, and the antenna structures are difficult to manufacture. Thus, new designs should be explored to simplify the structure and theoretical analysis.

Metasurface, due to its extraordinary electromagnetic properties, is widely used in antenna design [12–14], namely in the realization of multi-band [15, 16], ultra-wide-band [17–19], and high-gain antenna [20, 21]. In most cases, the metasurface structure is loaded on the antenna as a radiating element. The capability of a multi-band operation is not currently apparent. Many efforts have been made to solve this problem, such as etching a complementary split ring resonator (CSRR) on the ground plane. The CSRR unit cell can resonate with an electromagnetic wave, resulting in new resonance peaks. Ali et al. [22] created a triple-band antenna by etching rectangular and circular CSRRs. Zhou et al. [23] fabricated a composite right/left-handed structure as the radiating element and employed a square CSRR to get a dual-band antenna. Xu et al. [24] used a simple square split ring resonator to design an ultra-broad-band linear polarization converter, which provided a way to change the antenna polarization mode. We have recently obtained a broadband microstrip patch antenna by using a complementary rhombus resonator [25].

In this work, we designed a dual-band MPA loaded with a CSRR structure. The CSRR serves as a resonator. From the simulated results, it is found that the MPA exhibits excellent performance within the dual-band resonance in the range of 3.0–7.5 GHz. The measured results are similar to the simulated ones, which proves that the proposed antenna can be well–applied to physical devices.

C-band antenna have been widely used in satellite communication and navigation [26]. Therefore, we designed an antenna operating at 6.9 GHz. The top and back view of the antenna are, respectively, shown in Figures 1A,B. The upper layer of the antenna consists of a rectangular patch, and two different-width feedlines. The middle layer is an FR4 substrate with a relative dielectric constant of 2.65 and the lower layer is a metal ground plane. In order to realize the design of the dual-band antenna, the ground plane is modified. As shown in Figure 1C, CSRR was etched on the ground plane which is used to generating new resonance frequency. To further improve the electromagnetic performance of the antenna, a series of parameter optimization was carried out, and the ground plane of the proposed antenna is shown in Figure 1D. 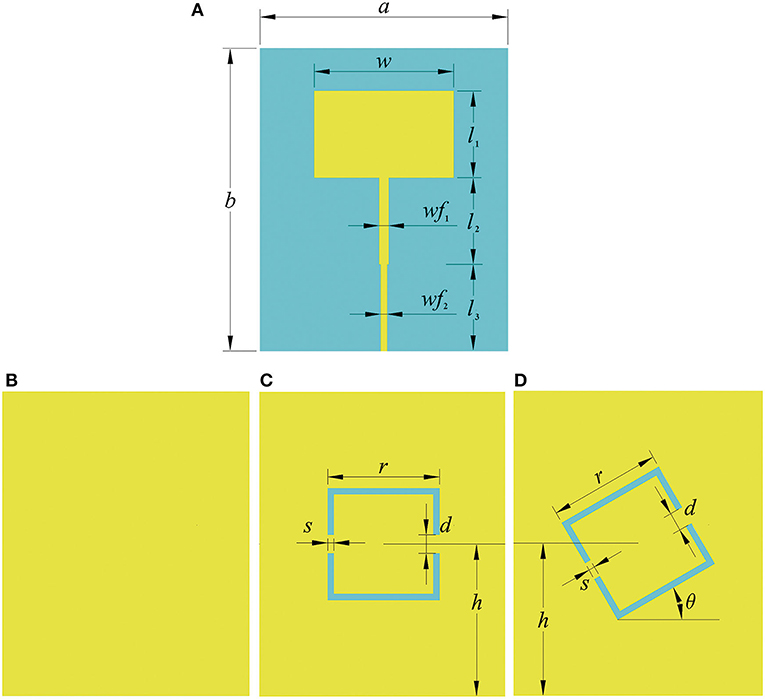 Figure 1. (A) Top view and (B–D) design process for the ground plane of the proposed antenna.

Figure 2. Return loss of the proposed antenna with a series of (A) side length r; (B) split width d; (C) rotation angle θ; (D) distance h.

Table 1. Parameters of the proposed antenna. 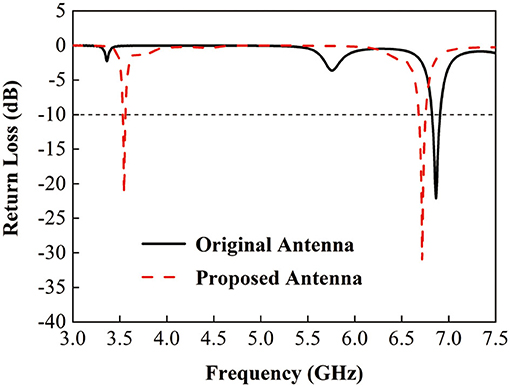 Figure 3. Return loss of the original antenna and the proposed antenna.

In order to explain the work principle of CSRR, the surface current distribution of the antenna is observed. Figure 4 shows the surface current distribution of the antenna without CSRR at 6.87 and 5.00 GHz. From Figures 4A,B, we can see that the current density at 6.87 GHz is higher than 5.00 GHz. It can be deduced that the electromagnetic wave of a specific frequency is excited by the rectangular patch and the feedlines, resulting in resonance at 6.87 GHz.

In order to figure out why CSRR can be used as a resonator, a few more details are exhibited. Comparing the results shown in Figure 5, it can be observed that the surface current distributes around the whole CSRR at 3.54 GHz, while only the lower half of CSRR has a current distribution at 6.72 GHz. It can be inferred that CSRR serves as a frequency-controlled switch which only opens at specific frequencies. When the switch is closed, the current in the CSRR shocks back and forth, resulting in new resonance within the antenna at 3.54 GHz. When the switch is on, the electromagnetic wave is only generated by the lower section of CSRR and it couples with the antenna radiating element, resulting in the original resonance point shifting by ~0.15 GHz. Combining with the return loss diagram in Figure 3, it can be concluded that the return loss at the resonance frequency increases by ~40%.

To verify the simulated results, the original antenna and the proposed antenna are fabricated, measured, and compared. A circuit board engraving machine is used to fabricate the antenna and a vector network analyzer (VNA) is used to measure the electromagnetic properties of the antenna. The fabricated antenna are shown in Figure 8. The simulated and measured return loss of the original antenna and the proposed antenna are shown in Figure 9. From Figure 9A, the two curves have a nearly consistent trend and the resonance peaks almost coincide. As depicted in Figure 9B, the two measured resonance frequencies move from 3.54 and 6.72 GHz to 3.62 and 6.58 GHz, respectively. Compared with the simulated curves, the return loss decreases by 3–4 dB. Considering the inevitable errors in the process of antenna manufacturing, welding, and measuring, the above deviation can be ignored. Similarly, the fact that the bandwidth of measured curves is broader than the simulated curves is also due to fabrication and measurement errors. Therefore, the measured results correlate with the simulated ones, which proves the reliability of the antenna.

Figure 8. Photographs of the fabricated antenna: (A) the original antenna; (B) the proposed antenna.

Figure 9. Simulated and measured return loss of the antenna: (A) the original antenna; (B) the proposed antenna.

Based on the above analysis, it can be summarized that an antenna etched with CSRR performs excellently despite being small in size and containing a simple structure. Furthermore, we compared the dual-band antenna designed in this work with other literature [8, 14, 22] in terms of size, number of resonance peaks, operating frequency bands, and peak gain, as listed in Table 2. It is observed that, in other works, multi-band antenna are larger, while small size antenna operate at single-band. The design of our work realizes both miniaturization and multi-band in an antenna, which widens the possibilities for multi-band antenna design. 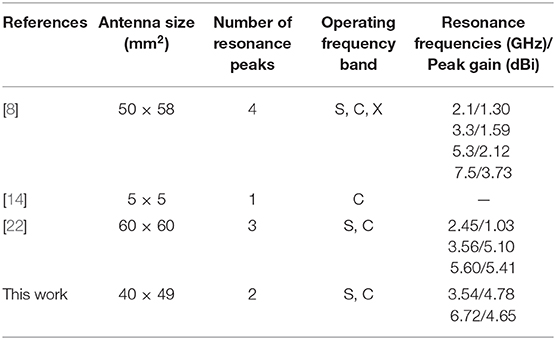 Table 2. Comparison of the antenna performances of this work and the previous literatures.

In conclusion, a dual-band MPA etched with CSRR was designed. The proposed antenna with high performance was obtained by optimizing the structural parameters of CSRR. Based on the simulated results of surface current distribution, it was found that the current shocks back and forth in the CSRR, generating a new resonance peak. By adjusting the rotation angle of the CSRR, an obvious resonance frequency appears. Moreover, the consistency between the simulation and the recorded measurement demonstrates the validity of the design. This work provides a new way to design multi-band antenna.

HY, KB, and XL designed the structure and fabricated the sample. HZ and HL performed the experiments. HY, HL, and KB wrote the manuscript with contribution from all the other authors. All authors participated in the discussion of the results.

Copyright © 2020 Yao, Liu, Zhu, Li, Dong and Bi. This is an open-access article distributed under the terms of the Creative Commons Attribution License (CC BY). The use, distribution or reproduction in other forums is permitted, provided the original author(s) and the copyright owner(s) are credited and that the original publication in this journal is cited, in accordance with accepted academic practice. No use, distribution or reproduction is permitted which does not comply with these terms.