Ben-Gurion University of the Negev, Israel

Guttman scales form the conceptual foundation for modern Item Response Theory (IRT). For example, Guttman scales underlie the Rasch model (e.g., Andrich, 1985) as well as Mokken scales (e.g., van Schuur, 2003),—see Tenenhaus and Young (1985) and Lord and Novick (1968) for classic reviews and discussions of Guttman scaling. Under the auspices of understanding the principal component structure of unidimensional scales, Guttman (1950) derived several important properties relating to the correlation matrix of perfect dichotomous Guttman items. Later work by Zwick (1987) identified that the eigenvalues corresponding to this matrix can be written as simple functions of the number of items, under a set of uniformity conditions.

In this brief note, we extend the results of Zwick (1987) by considering the covariance matrix of dichotomous Guttman items under these same uniformity conditions. We derive closed-form solutions for the eigenvalues and eigenvectors of this matrix, for any number of items. In particular, we provide expressions in terms of simple trigonometric functions of the number of items. These expressions lead to a simple explanation of the signing relationships among principal components for Guttman scales first described by Guttman (1950).

The core idea of a Guttman scale is that the set of items under consideration forms a unidimensional scale, i.e., if a person obtains a correct response to an item then this person would obtain a correct response to all “easier” items. Table 1 presents a matrix of response patterns conforming to a perfect Guttman scale for five items, with Item 5 being the most “difficult” and Item 1 being the “easiest.”

Table 1. An example of a perfect Guttman scale for five items.

Under our assumptions, the covariance between any items i and j, with i ≤ j, is equal to the following:

As one would expect, Equation (1) is closely related to the Pearson product-moment correlation, which, as described by Zwick (1987), is equal to:

Parallel to Zwick (1987) and Guttman (1950), who handled the correlation matrix, we consider the n × n covariance matrix defined by Equation (1). We first provide the n distinct eigenvalues.

Proposition 1. The covariance matrix σcov, with entries given by Equation (1), has its eigenvalues equal to (in decreasing order)

The proof is in the Appendix.

Note how i and n determine the period of the cosine term in the denominator of the right-hand side of Equation (3). From the same equation, the maximal eigenvalue for any fixed number of items n is equal to . Note that as n → ∞, . Also, the eigenvalues of the covariance matrix are very different from the eigenvalues of the Pearson product correlation matrix, which, as described by Zwick (1987), are equal to .

The eigenvectors of the covariance matrix also have an elegant, closed-form expression.

Proposition 2. For the covariance matrix σcov defined by Equation (1), an eigenvector Pi of eigenvalue , with i = 1, 2, …, n (as in Proposition 1), results from setting

The proof is in the Appendix.

Table 2. This table presents the eigenvector components of the covariance matrix for n = 5.

In this section, we illustrate how our analytic results could be used to evaluate responses conforming to modern IRT models. We consider the well-known two parameter logistic (2PL) model, where the probability of a correct response to item i is defined as follows:

From the perspective of the 2PL model, Guttman items are obtained by letting the ai (item discrimination) parameter values become arbitrarily large (e.g., van Schuur, 2003), i.e., the probability of a test taker correctly answering an item given that their latent skill is higher (lower, resp.) than the item difficulty is 1 (0 resp.). Our results provide a new perspective on the item covariance and principal component structure of 2PL items under the idealized conditions of a Guttman scale. Indeed, one could consider the eigenvalues and eigenvectors in Equations (3–4) as an error-free ideal for such response data, under our assumption of a uniform distribution over response patterns.

In the next section, we compare our results to simulated data that relax the assumption of a uniform distribution over response patterns. In the first simulation study, we compare our results to data generated from a Rasch model (Equation 5 with ai = 1, i = 1, 2, …, n) where the person specific ability parameter, θ, is randomly drawn from a standard normal distribution. For the second simulation study, we consider a setup nearly identical to the first, with the exception that we consider large values of ai for each item, i.e., high discrimination among items.

For each condition, we computed the covariance matrix of the items using the 5000 simulated responses, i.e., we calculated the sample covariance of the 5000 responses. We then numerically calculated the eigenvalues of this covariance matrix. Figure 1 compares the eigenvalues obtained from the simulated data to the eigenvalues obtained from Equation (3), for each condition. It is interesting to note that the largest eigenvalue for the simulated data is always larger than the maximal eigenvalue obtained via Equation (3), this is similar to results obtained by Zwick (1987) within the context of the Guttman correlation matrix. In general, moving to a probabilistic response model (the Rasch model) and sampling the θ values from a normal distribution appears to yield covariance eigenvalues that greatly differ from those obtained in Equation (3). As we show in the next study, improving item discrimination will yield different results. 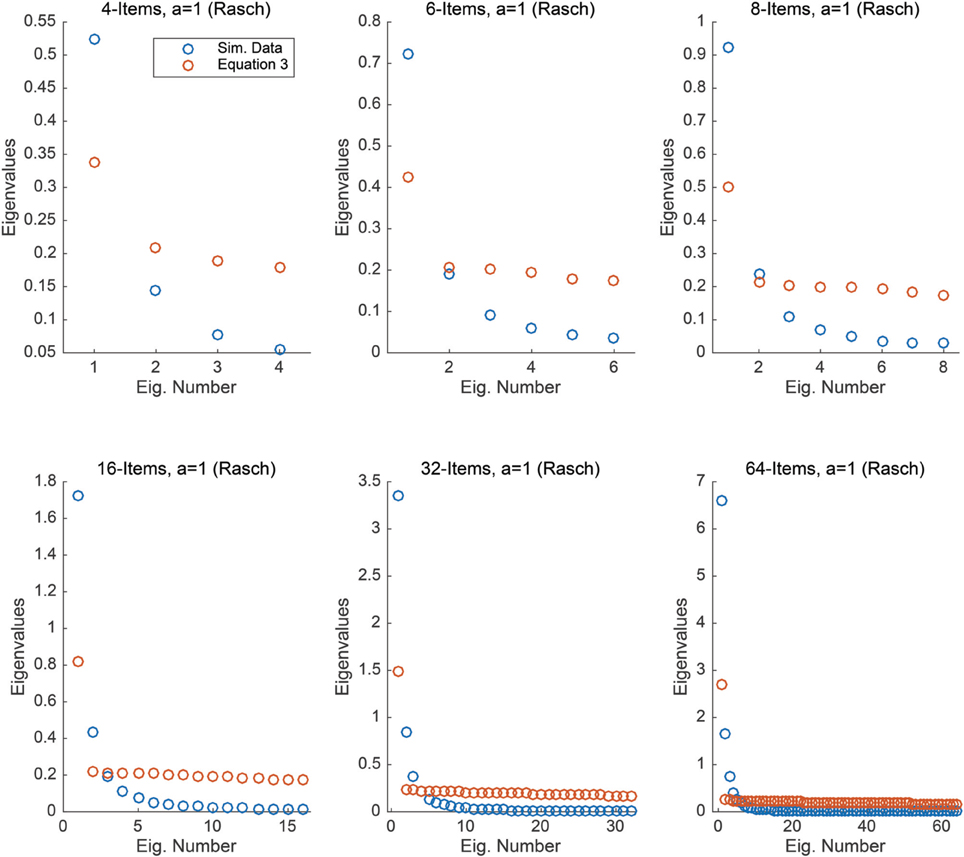 In this simulation study, we consider nearly identical conditions to the first, with the exception that the item discrimination parameters, ai, are large in size, indicating excellent item discrimination. As in the previous study, we considered six conditions comprised of: 4, 6, 8, 16, 32, and 64 test items. For each condition, the difficulty of the items, bi, was equally spaced along the interval [−1, 1]. As before, for each condition, we randomly sampled 5000 values of θ from a standard normal distribution. We obtained simulated responses to the items by applying the sampled θ values, and item difficulties, bi, to Equation (5), with ai = 3, i = 1, 2, …, n, indicating excellent item discrimination. As before, for each condition, we have 5000 simulated responses to the test items. 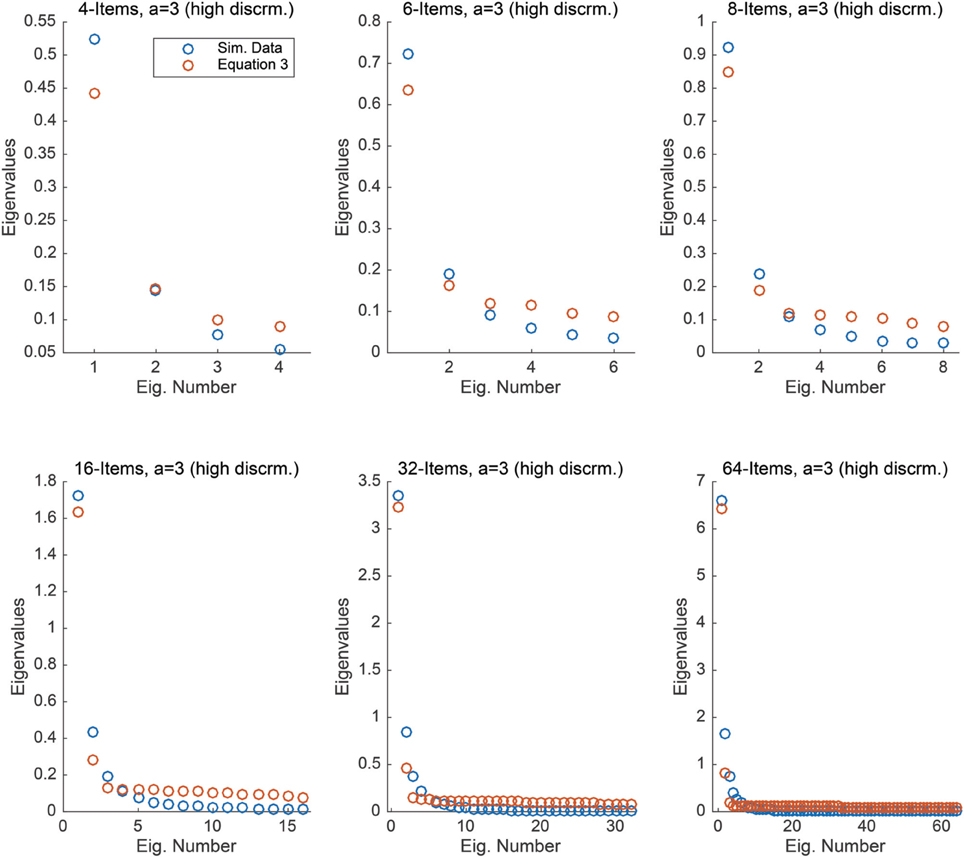 This study illustrates that our analytic results, which are derived under the strong assumption of uniformly distributed response patterns, may be useful as an approximation even when the ability parameter is normally distributed. This approximation is best when the difficulty range of the items are within a single standard deviation of the mean and the items have excellent discriminability. As the range of the item difficulty increases and/or the variance of the ability parameter distribution shrinks, the approximation becomes much poorer. Our Matlab code for generating these graphs and exploring other configurations is available as an online supplement.

We derived closed-form solutions for the eigenvalues and eigenvectors of the covariance matrix of dichotomous Guttman items, under a uniform sampling assumption. We demonstrated that these eigenvalues and eigenvectors are simple trigonometric functions of the number of items, n. Our results parallel those of Zwick (1987), who examined the eigenvalues of the correlation matrix of dichotomous Guttman items under the same uniformity assumptions. It remains an open question whether the eigenvectors of the correlation matrix, as investigated by Zwick (1987), can also be solved for explicitly.

We would like to thank Edgar Merkle, Jay Verkuilen, and David Budescu for comments on an earlier draft. Davis-Stober was supported by National Science Foundation grant (SES-1459866, PI: Davis-Stober).

The Supplementary Material for this article can be found online at: https://www.frontiersin.org/article/10.3389/fpsyg.2015.01767

A. Proofs of Propositions 1 and 2

To prove the main results of the paper, we first derive the general inverse of the covariance matrix of Guttman items under our uniformity assumptions. This inverse has a special tridiagonal form. From this tridiagonal form, we apply known algebraic results to obtain the required eigenvalues and eigenvectors.

Define X as the (n + 1) × n matrix of perfect Guttman scores under the specified uniformity assumptions. The rows of this matrix correspond to response patterns while the columns correspond to Guttman items, see also Table 1. This matrix has zeros on the diagonal and above, and all elements below the diagonal are ones:

Obtaining the eigenvalues and eigenvectors of the covariance matrix via the columns v(i) of X can be done in five steps:

2. computing the element Sij of the matrix S as the scalar product ṽ(i) · ṽ(j);

3. deriving the inverse of S by taking into account a special property of the rows of S (see below);

4. inferring the eigenvalues and eigenvectors of S−1 (then also of S) from the special form of S−1, a tridiagonal matrix;

5. finally, observing that the covariance matrix equals , thus obtaining the eigenvalues and eigenvectors of .

Let us rephrase these steps in a more geometric fashion. In Step 1, ṽ(i) is the image of v(i) by the orthogonal projection from ℝn + 1 to the hyperplane H with equation (indeed, ṽ(i) ∈ H and furthermore ṽ(i) − v(i), a constant vector, is orthogonal to H). Moreover, notice that e(i) − e(j) belongs to H and so projects onto itself. Consequently, for i = 1, 2, …, n, we derive from Equation (A1)

(indeed, the product of the above matrix with S equals the identity matrix).

The form of S−1 follows a particular tridiagonal form that has been extensively studied in the mathematics literature. Elliott (1953) and Gregory and Karney (1969) identified that the eigenvalues λi of S−1, and (selected) corresponding eigenvectors Pi, for i = 1, 2, …, n, are given by (in increasing order) and respectively (where m = 1, 2, …, n). These results were later extended to more general tridiagonal matrices by Yueh (2005), see also Yueh and Cheng (2008) and Bünger (2014).

Copyright © 2015 Davis-Stober, Doignon and Suck. This is an open-access article distributed under the terms of the Creative Commons Attribution License (CC BY). The use, distribution or reproduction in other forums is permitted, provided the original author(s) or licensor are credited and that the original publication in this journal is cited, in accordance with accepted academic practice. No use, distribution or reproduction is permitted which does not comply with these terms.