In the field of emotion research, the influence of emotion regulation strategies on memory with emotional materials has been widely discussed in recent years. However, existing studies have focused exclusively on regulating negative emotion but not positive emotion. Therefore, in the present study, we investigated the influence of emotion regulation strategies for positive emotion on memory. One hundred and twenty college students were selected as participants. Emotional pictures (positive, negative and neutral) were selected from Chinese Affective Picture System (CAPS) as experimental materials. We employed a mixed, 4 (emotion regulation strategies: cognitive up-regulation, cognitive down-regulation, expressive suppression, passive viewing) × 3 (emotional pictures: positive, neutral, negative) experimental design. We investigated the influences of different emotion regulation strategies on memory performance, using free recall and recognition tasks with pictures varying in emotional content. The results showed that recognition and free recall memory performance of the cognitive reappraisal groups (up-regulation and down-regulation) were both better than that of the passive viewing group for all emotional pictures. No significant differences were reported in the two kinds of memory scores between the expressive suppression and passive viewing groups. The results also showed that the memory performance with the emotional pictures differed according to the form of memory test. For the recognition test, participants performed better with positive images than with neutral images. Free recall scores with negative images were higher than those with neutral images. These results suggest that both cognitive reappraisal regulation strategies (up-regulation and down-regulation) promoted explicit memories of the emotional content of stimuli, and the form of memory test influenced performance with emotional pictures.

In daily life, the various emotion-triggering events (ETE) (Sheppes and Meiran, 2007) we encounter evoke different emotional experiences. Emotions play a crucial role in survival because they remind us to seek advantages and avoid disadvantages. However, highly intense emotions are not always adaptive. Successful management of our emotions is associated with positive outcomes, including an enhanced sense of self-efficacy and improved psychological well-being (Eisenberg et al., 2000). Emotion regulation refers to the processes by which we influence which emotions we experience, when we experience them, and how we experience and express them (Gross, 1998b). Different emotion regulation strategies can produce different effects on personal experiences, cognition, social behaviors, and well-being (Gross, 2002; Phillips et al., 2006; Rubin et al., 2009). The effects of various emotion regulation strategies on cognition and memory have received considerable attention from researchers (Dillon et al., 2007; Hayes et al., 2010; Knight and Ponzio, 2013).

Expressive suppression is a response-focused emotion regulation strategy that occurs in the late stage of the emotion, by suppressing emotional activities (such as facial expression) which will occur or are occurring to regulate emotion experience. Most of the previous studies have shown that expressive suppression could impair the memory of emotional events relative to a passive viewing condition (Richards and Gross, 2000; Bonanno et al., 2004; Dillon et al., 2007; Hayes et al., 2010; Binder et al., 2012).

Thirty pictures (10 negative, 10 neutral, and 10 positive) were presented at encoding procedure, and the others as novel stimuli in the recognition test. Pictures in the encoding procedure and recognition tests were counterbalanced across participants. Participants were randomly assigned to each of four groups: passive viewing, expressive suppression, cognitive up-regulation, and cognitive down-regulation. Each group had 30 participants.

After participants gave informed consent, instructions were provided. These informed participants which emotion regulation strategy they should use to regulate their emotion. Each trial (see Figure 1) began with a fixation cross for 100 ms. The fixation cross was followed by a picture that was either positive, negative or neutral (4000 ms). The picture was then replaced with a blank screen (6000 ms). Immediately following the blank screen, participants rated how strongly they experienced negative or positive emotion on a computerized scale ranging from 1 (very negative) to 9 (very positive), and how intense their experience was on a scale ranging from 1 (very calm) to 9 (very intense). Valence and intensity ratings occurred at the end of each trial. Participants were given opportunities to practice the strategies with pictures from each valence category.

Following the recognition test, there was a free recall test. Participants were instructed to provide a written description for as many pictures as they could recall from the encoding phase, and were asked to provide enough detail so that an outsider could identify each picture and could differentiate it from similar pictures. They were told to avoid using abstract words, such as beautiful, nausea, and so forth. Free recall data were scored according to the number of pictures’ features that participants reported. Each picture had one crucial feature and 1–2 detailed features; these features were enough to allow all raters to identify and classify the corresponding pictures as remembered. Zero and 1 codes represented a complete retrieval failure and a retrieval success, respectively. Participants were also told that they could list the pictures in any order and that they could have as much time as they needed. Recall was scored by three students who majored in psychology. Inter-rater reliability was very high (Cronbach’s α = 0.99).

Valence and arousal ratings were subjected to a repeated measures ANOVA with strategy (up-regulation, down-regulation, expressive suppression, passive viewing) as the between-subjects factor and emotional picture (negative, neutral, and positive) as the within-subjects factor. 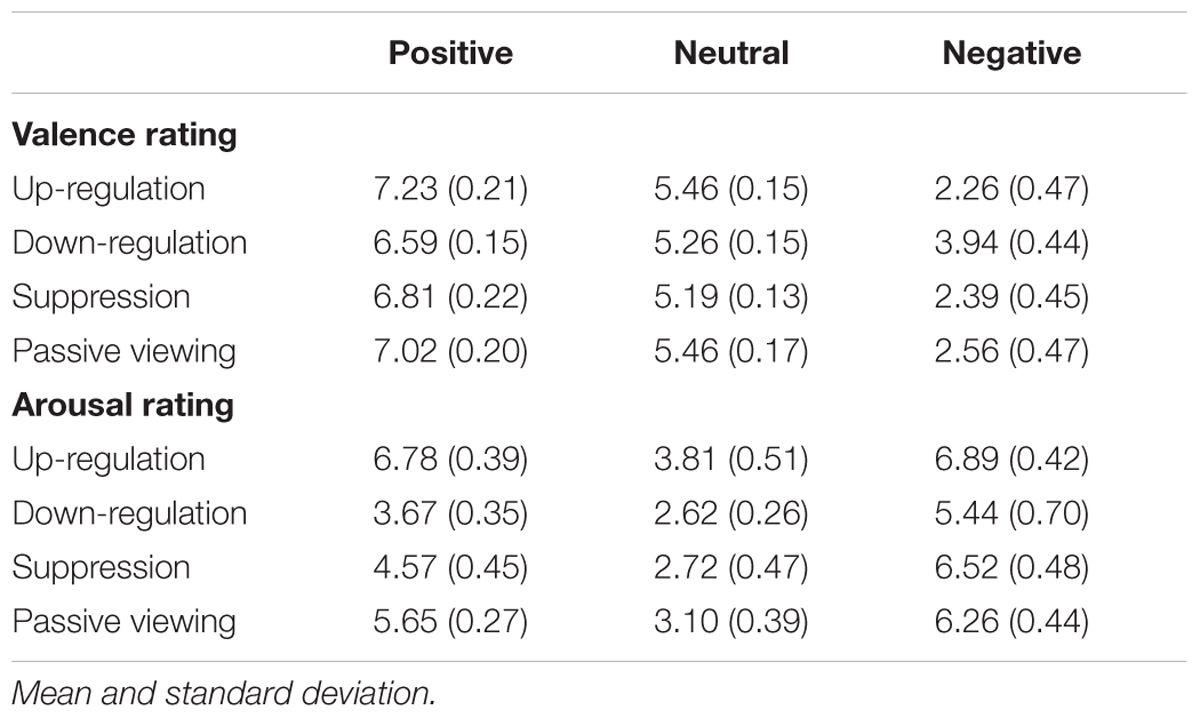 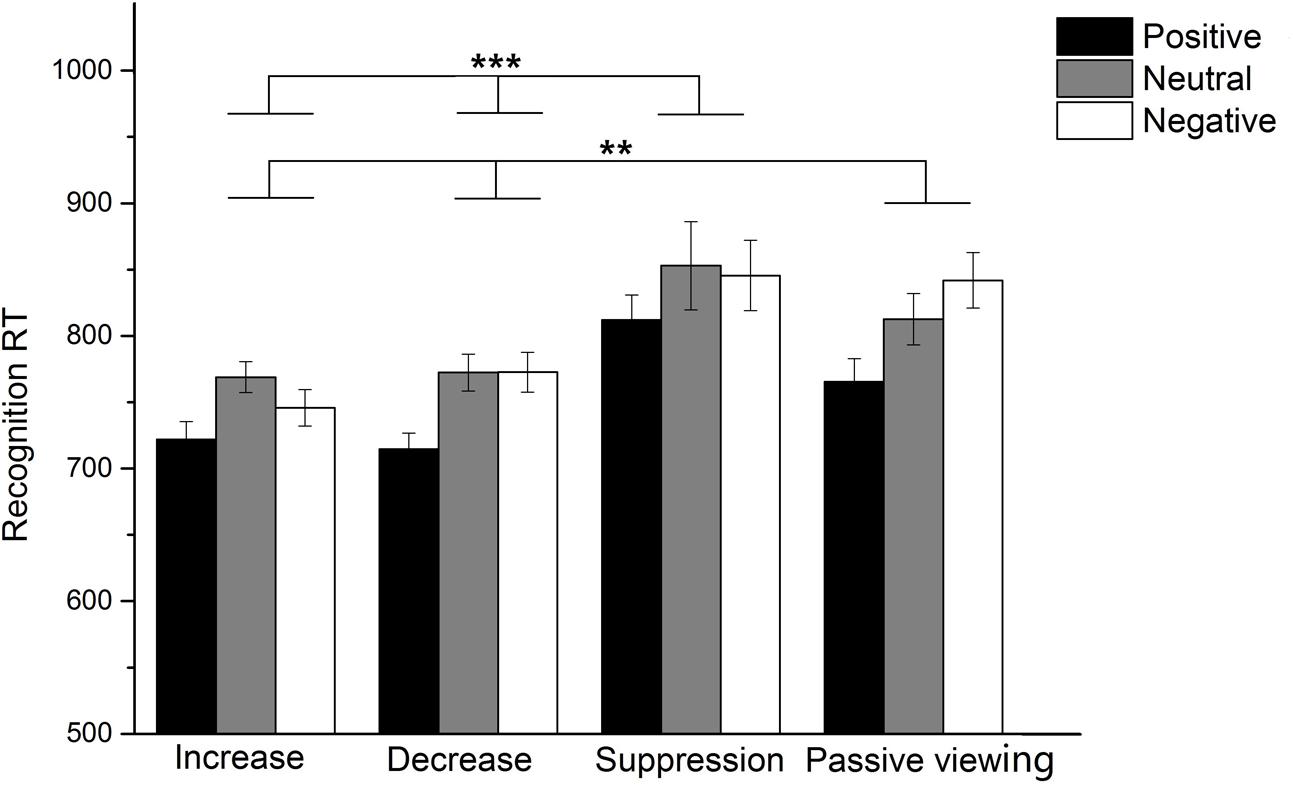 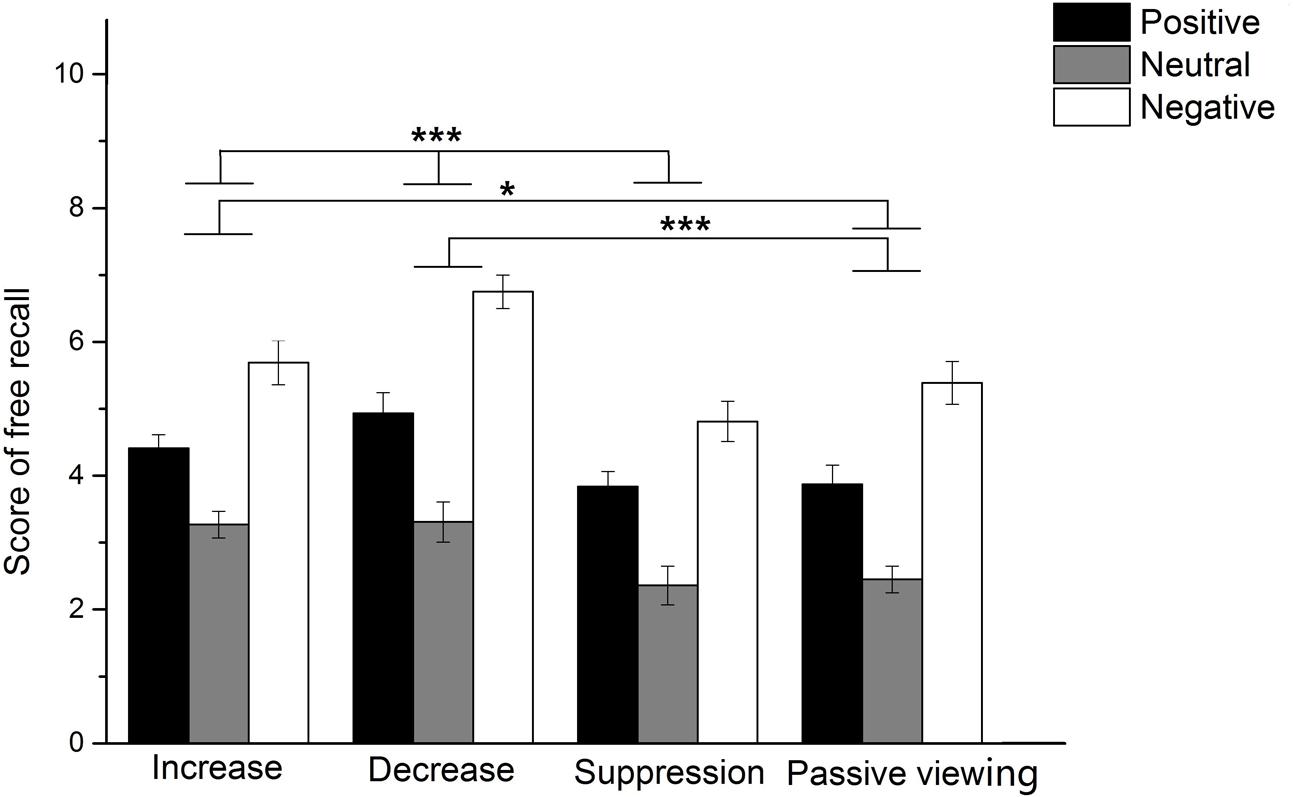 Cognitive up-regulation significantly enhanced the arousal from three emotional pictures, while cognitive down-regulation significantly reduced the arousal from the pictures. Self-reported arousal was lower in the expressive suppression condition than the passive viewing condition for positive images and neutral images, but not for negative images. Previous studies have shown that expressive suppression could increase negative emotions and reduce positive emotions (Brans et al., 2013). This shows that our results are reliable. According to the self-reported valence and arousal ratings, participants adopted these emotion regulation strategies to regulate their emotional experience of emotional pictures effectively.

As two types of explicit memory test, recognition and free recall are two paradigms for measuring recollection and familiarity. Recollection is the extraction of specific information from previously learned projects, while familiarity evaluates the overall similarity between previously learned projects and test projects. Familiarity is the feeling of “déjà vu” when there is insufficient source information (Yonelinas, 2002; Liu et al., 2015). We therefore believe that, in recognition tasks, global processing is relied upon more; while in free recall tasks, the extraction of local information has greater importance.

Fredrickson proposed a broaden-and-build theory, suggesting that positive emotion could broaden an individual’s momentary thought–action repertoire, including the expansion of attention, cognition, action and other variables (Fredrickson and Levenson, 1998). Fredrickson suggested that both negative and positive emotions were adaptive. Negative emotion can make a person benefit from a threatening situation, since it will result in specific action tendencies and narrows a person’s thought-action resources in life-threatening situations, so that the individual will focus more on the momentary situation, and makes a quick, decisive action to survive. Fredrickson employed a global-local visual processing task (Fredrickson and Branigan, 2005), and found that participants in a positive emotional state were more likely to choose a figure that was consistent with the global pattern of the standard figure, indicating that positive emotions can broaden attention scope and produce a wider focus on global rather than local characteristics. Whereas individuals in a positive emotional state have a wider attention span and are more inclined to adopt global processing, participants in a negative emotional state have a narrowed attention span and are more inclined to use local processing. Therefore, in the recognition task, which relies on global judgment, the memory performance with positive pictures was better than with negative pictures. Conversely, free recall task, which relies on the memory of local information, results with better performance for negative pictures.

In summary, this study demonstrated that both cognitive up-regulation and down-regulation strategies improved the recognition of emotional information and free recall test scores. We speculated that cognitive reappraisal influenced memory by affecting the degree of material processing. For instance, cognitive reappraisal enhanced memory by directing more attention to deeper processing of stimuli. On the other hand, since attention was diverted away from the stimuli during expressive suppression, memory performance was impaired. We conclude that cognitive reappraisal strategies not only effectively regulate our emotions, but also improve our memory of emotional events.

This study was carried out in accordance with the recommendations of ‘name of guidelines, name of committee’ with written informed consent from all subjects. All subjects gave written informed consent in accordance with the Declaration of Helsinki. The protocol was approved by the ‘East China Normal University of Committee on Human Research Protection.’

Concept and design of study: YW and JC. Data acquisition, analysis, and interpretation: YW and BH. Drafting the work or revising it critically for important intellectual content: YW and JC. Final approval of the version to be published: YW, JC, and BH. Agreement to be accountable for all aspects of the work in ensuring that questions related to the accuracy or integrity of any part of the work are appropriately investigated and resolved: YW, JC, and BH.

This work was supported by a Humanities and Social Sciences Research Young Investigator Grant from the Ministry of Education in China (16YJC190020) and Fundamental Research Funds for the Central Universities (2017ECNU-HWFW021).

Copyright © 2017 Wang, Chen and Han. This is an open-access article distributed under the terms of the Creative Commons Attribution License (CC BY). The use, distribution or reproduction in other forums is permitted, provided the original author(s) or licensor are credited and that the original publication in this journal is cited, in accordance with accepted academic practice. No use, distribution or reproduction is permitted which does not comply with these terms.