Necessity as a Function of Skewness

Dul (2016a) has developed necessary condition analysis (NCA) as a tool to investigate whether a factor X can be considered a necessary condition for another factor Y. In this analysis one simply calculates the amount of empty space in the upper-left corner when plotting X and Y against each other (Figure 1). A large empty space in the upper-left corner is taken to indicate that it is impossible to achieve a high value on Y with a low value on X, i.e., that a certain minimum level of X is necessary for a high level of Y. Either a step function (CE-FDH) or a linear regression function (CR-FDH) is applied to ceiling points with a higher y-value than all points with a lower x-value (black dots in Figure 1). According to Dul (2016a), the degree of necessity is calculated by dividing the area of the empty/semi-empty upper-left corner with the area given by (Xmax – Xmin) × (Ymax – Ymin) (inner square with gray border in Figure 1). In Figure 1, the calculated necessity effects tells us that 42.7% of this square is above/to the left of the dotted line given by a step function (=CE-FDH) and 37.8% is above/to the left of the solid regression line (=CR-FDH). According to Dul (2016a), CE-FDH and CR-FDH values below 0.1 could be characterized as small, values between 0.1 and 0.3 as medium, values between 0.3 and 0.5 as large, and values above 0.5 as very large necessity effects. 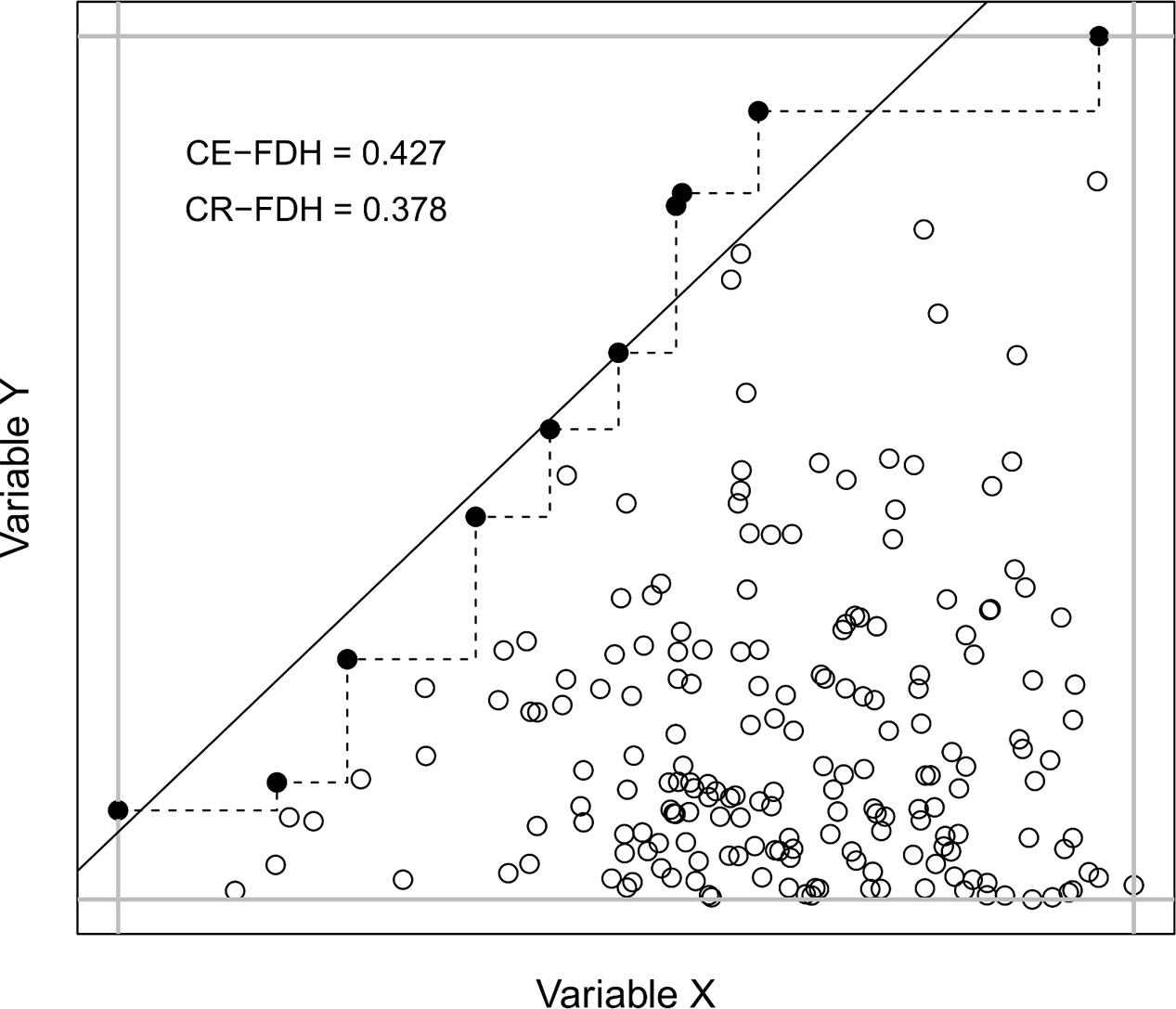 FIGURE 1. An illustration of NCA, where the size of the empty/semi-empty upper-left corner is calculated using either a step function (CE-FDH, dotted line) or a linear regression function (CR-FDH, solid line). In this example, N = 200, skewness of X = –0.60, and skewness of Y = 1.52.

Necessary condition analysis has been used by Karwowski et al. (2016, 2017) and based on these studies the authors concluded that a not too low level of intelligence is necessary for creativity and the same conclusion was drawn by Shi et al. (2017). Other researchers using NCA have concluded that a certain degree of workplace spirituality is necessary for high levels of employee commitment, job satisfaction, and work-life balance satisfaction (Garg, 2017), that contracts with at least medium levels of contractual detail as well as the highest levels of trust are necessary for buyer–supplier relationships that have high levels of innovation (Van der Valk et al., 2016), and that a certain minimum level of safety consciousness is required to achieve top productivity results among long-haul truck drivers (De Vries et al., 2017).

Reading the literature mentioned above, we started to suspect that the degree of necessity, as quantified by NCA, might be influenced by the skewness of the predictor and of the outcome, and that the precision of the necessity effect (i.e., its standard error) might also be influenced by sample size. The objective of the present simulation study was to explore these possibilities.

In order to always predict a value between 0 and 1, CE-FDH and CR-FDH were transformed to log odds (logit) and these were highly predictable [R2 = 0.70 and 0.64 for logit(CE-FDH) and logit(CR-FDH), respectively] from the skewness of X and Y and their interaction according to the following formulas:

The standard error of CE-FDH and CR-FDH was calculated for various combinations of sample size, skewness of X, and skewness of Y, and the natural logarithm (in order to never predict a negative standard error) of these were highly predictable [R2 = 0.71 and 0.87 for log(SE(CE-FDH)) and log(SE(CR-FDH)), respectively] according to the following formulas:

The association between the skewness of X and the degree of necessity (CR-FDH) for the combinations of three different ranges of skewness of Y and three different sample sizes, is presented in Figure 2. The predicted CR-FDH, as given by the formula above, is included as a solid line in the plots. According to the z- and t-distributions, 95% of parameter values calculated in samples are expected to be within two standard errors from the corresponding parameter value in the population that the sample has been drawn from (Argyrous, 2000). Therefore, by adding and subtracting two predicted standard errors to/from the predicted CR-FDH, we get a predicted 95% CI and these are included as dotted lines in the plots.

According to the present simulation, the probability of getting a result indicating a high degree of necessity, as quantified by NCA, increases with a negatively skewed predictor X and with a positively skewed outcome Y. Both the skewness of X and the skewness of Y had large necessity effects on the calculated necessity effect. The reason for this is that according to NCA, a high degree of necessity is indicated by a large empty upper-left corner in a X–Y-plot and the probability for this is given by:

In order not to draw hasty conclusions about necessity, researchers using NCA should be aware of this influence of skewness. It is recommended to estimate the degree of necessity that can be expected from the amount of skewness alone, for example by using the formulas presented in this paper (a function is available in the Supplementary Script), and evaluate if the observed necessity effect is substantially above this expected value, preferably outside the calculated confidence interval. For example, Karwowski et al. (2017) calculated CE-FDH = 0.25 and CR-FDH = 0.21 for the association between intelligence, as measured by Raven Progressive Matrices (RPM), and creative achievement, measured with Creative Achievement Questionnaire (CAQ), in a sample of 1594 persons. Karwowski et al. (2017) also calculated CE-FDH = 0.35 and CR-FDH = 0.30 for the association between WISC-scores and CAQ in a sample of 255 participants. These values can be compared with expected values in Table 2, calculated with the formulas presented in this paper and using skewness of Y = 2.2 as this was the skewness of CAQ mentioned in Karwowski and colleagues paper. It is apparent that unless RPM and WISC were quite severely positively skewed, and they did not seem to be according to descriptive statistics and figures, the necessity effects found by Karwowski and colleagues are well within the range of what can be expected from skewness alone. Thus, based on the findings in Karwowski et al. (2017) and the present simulation, it would be problematic to assume that intelligence is any more necessary for creative achievement than a random variable with the same skewness as intelligence is for another random variable with the same skewness as creative achievement.

TABLE 2. Expected CE-FDH and CR-FDH for five different skewness of X when skewness of Y = 2.2. The 95% CI for two different sample sizes are also given.

The present simulation shows that with skewed variables NCA might give an unwarranted indication that a certain variable X is necessary for another variable Y, which could be seen as a threat against the usefulness and rationale of the method. We suggest that calculations of expected necessity effects, with confidence intervals, as demonstrated in the present paper, will provide at least some protection against unjustified conclusions.

All authors conceived of the presented idea. KS carried out the simulations and analyses and wrote an initial draft. All authors discussed the results and contributed to the final manuscript.

The Supplementary Material for this article can be found online at: https://www.frontiersin.org/articles/10.3389/fpsyg.2017.02192/full#supplementary-material

Copyright © 2017 Sorjonen, Wikström Alex and Melin. This is an open-access article distributed under the terms of the Creative Commons Attribution License (CC BY). The use, distribution or reproduction in other forums is permitted, provided the original author(s) or licensor are credited and that the original publication in this journal is cited, in accordance with accepted academic practice. No use, distribution or reproduction is permitted which does not comply with these terms.