Discussion: One-year outcomes from this randomized, controlled pilot trial suggest that brief MBI may reduce depression and IR in at-risk adolescents. Replication and exploration of mechanisms within the context of a larger clinical trial are necessary.

Mindfulness has been described in clinical contexts as paying attention in a purposeful way to the present moment, without judgment (Kabat-Zinn, 1994). In adults, mindfulness-based interventions (MBIs) have been utilized for managing common, chronic health conditions like type 2 diabetes (T2D). Randomized controlled trials in adults with diabetes show that MBIs have small-to-moderate effects for decreasing depression and heterogeneous effects for glycemic control (Abbott et al., 2014). MBIs are designed to address depression by increasing frequency of mindful states, thereby providing individuals with more effective ways of coping with stressors that accompany major health conditions.

Learning mindfulness-based coping skills during adolescence has potential to alter progression of metabolic abnormalities. In particular, adolescence is a sensitive period for insulin resistance (IR) that accompanies puberty. Pubertal IR triggers a trajectory toward worsening IR and eventual T2D in vulnerable youth (Kelsey and Zeitler, 2016). Adolescents at-risk for T2D are disproportionately female, from historically marginalized race/ethnicities, and frequently experience depression (Walders-Abramson et al., 2013). Depression symptoms are associated with greater IR in adolescents, predict worsening IR over time, and relate to T2D onset in young adulthood (Shomaker et al., 2011; Suglia et al., 2016). Depression is hypothesized to affect IR, independent of energy balance, through stress-related behavior (e.g., emotional-eating) and physiology (e.g., hypercortisolism). Therefore, intervening to increase mindfulness and decrease depression in adolescents at-risk for T2D is anticipated to ameliorate IR. MBIs may have salutary effects on IR through a number of mechanisms, including decreases in depression and increases in effective self-regulation of attention, stress, emotion, and behaviors important for IR, such as emotional eating (Lyons and Zelazo, 2011).

We conducted a randomized, controlled trial to pilot an MBI in adolescent girls at-risk for T2D with elevated depression symptoms. We had positive findings for the primary outcome of feasibility/acceptability (Shomaker et al., 2017). In secondary analyses, we found that adolescents in MBI had larger post-treatment decreases in depression and IR and larger 6-month decreases in depression, compared to cognitive-behavioral therapy (CBT; Shomaker et al., 2017).

The objective of this brief report was to explore 1-year outcomes. We hypothesized that adolescents randomized to MBI would have lower depression and IR at 1-year than CBT participants, based upon our initial findings and the notion that MBI may be uniquely suited for the high-stress arousal and psychosocial context of adolescents at-risk for T2D (Shomaker et al., 2017). In contrast to CBT depression interventions that focus on restructuring negative thoughts and increasing positive behaviors, MBI centers on cultivating self-regulation through present-focused, non-judgmental attention to one’s body, emotions, and thoughts. The current analysis directly addresses shortcomings of existing literature by relying on a randomized controlled design, using an active comparator, and conducting long-term follow-up (Van Dam et al., 2017).

Following an appointment to screen eligibility and collect baseline assessments, adolescents were randomized to a six-session MBI group (Learning to BREATHE; n = 17) or six-session CBT depression prevention group (Blues Program; n = 15) (Shomaker et al., 2017). The randomization sequence was generated by an electronic program using permuted blocks and stratified by age and race/ethnicity. Interventions were matched for time and attention. Sessions were co-facilitated by a clinical psychologist and graduate student in psychology or marriage and family therapy. Phlebotomists were blinded to allocation; trained research associates or graduate research assistants served as assessors of psychosocial characteristics and body measurements, and they were not consistently blinded.

Descriptive information on baseline and 1-year sample characteristics is provided in Supplementary Table 1. One-year retention was 71% (n = 12) in MBI; 81% (n = 13) in CBT (p = 0.48). Baseline characteristics were not significantly related to retention. 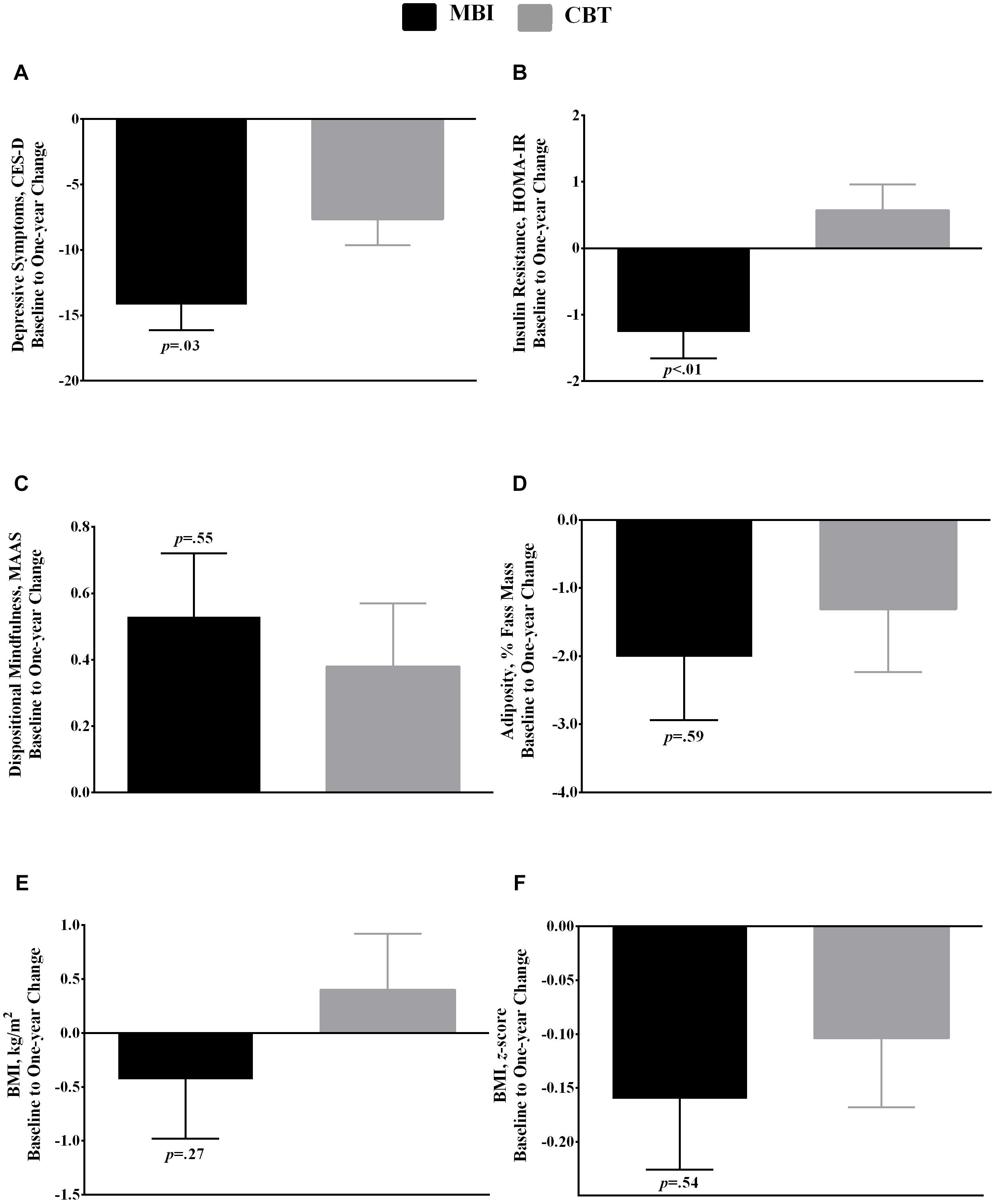 In this pilot study, dispositional mindfulness increased at 1-year within MBI only, but the between-condition difference was a non-significant, small effect relative to CBT. One possibility is that by more effectively decreasing depression, MBI improves underlying behavioral and/or physiological factors that affect IR such as sleep, physical activity, eating behavior, and stress arousal. A significant limitation is the pilot nature of the current study; the small sample size warrants caution regarding interpretation of effect sizes (Kraemer et al., 2006). Provided replication with a larger sample, the current findings suggest there may be promise for relatively brief MBI approaches to lessen T2D risk in adolescents with depression. Differentiating mechanisms of MBI vs. CBT in adolescents at-risk for T2D is an important step for future research. Pinpointing mechanisms would help to refine theoretical models and ultimately, aid in developing scalable integrative health interventions for this group of at-risk adolescents.

The Supplementary Material for this article can be found online at: https://www.frontiersin.org/articles/10.3389/fpsyg.2019.01040/full#supplementary-material

Copyright © 2019 Shomaker, Pivarunas, Annameier, Gulley, Quaglia, Brown, Broderick and Bell. This is an open-access article distributed under the terms of the Creative Commons Attribution License (CC BY). The use, distribution or reproduction in other forums is permitted, provided the original author(s) and the copyright owner(s) are credited and that the original publication in this journal is cited, in accordance with accepted academic practice. No use, distribution or reproduction is permitted which does not comply with these terms.