Individual differences in mathematic achievement have been the focus of a wide strand of research and a growing area of concern for policy makers and educational psychologists in the last decades. Although several factors have been shown to explain individual differences in mathematic achievement (such as socioeconomic status, see Ritchie and Bates, 2013), math anxiety has been widely accepted to have a robust negative impact on math performance (Hill et al., 2016; Sorvo et al., 2019; Xie et al., 2019; Zhang et al., 2019).

On the other hand, there is a growing consensus that emotional component induced by math anxiety may also affect math performance. For instance, recent studies on the central nervous system (CNS) have found higher activation of brain areas associated with pain perception and negative emotional process in math anxiety individuals before and during math tasks (Lyons and Beilock, 2012; Young et al., 2012). Besides, physiological responses related to anxiety such as increases in heart rate (Ushiyama et al., 1991), secretory immunoglobulin A (sIgA) concentration and secretion rate (Willemsen et al., 2000), higher cortisol level (see review by Chang and Beilock, 2016), and change in systolic blood pressure (Hunt et al., 2017) have been found in individuals with math anxiety when they performed math tasks. These studies indicate CNS reflected by brain activation, hypothalamic–pituitary–adrenal (HPA) axis reflected by cortisol, and the mixture of sympathetic nervous system and parasympathetic nervous system reflected by heart rate and blood pressure participated in emotional process of math anxiety. Apart from the physiological indicators mentioned above, respiratory sinus arrhythmia (RSA) is a real-time response solely innervated by the parasympathetic nervous system (PNS) that captures unique emotional reactions other than cortisol, heart rate, and blood pressure (Frazier et al., 2004). Examining RSA might provide new insight into understanding the role of the parasympathetic nervous system in math-anxious individuals.

RSA, which refers to the natural log equivalent of the high-frequency component (0.15–0.5 Hz) of heart rate variability (HF-HRV), is the rhythmic fluctuation of cardiac interbeat intervals (IBIs) during breathing and reflects the control of the parasympathetic nervous system entirely mediated by vagal tone (Berntson et al., 1993; Porges, 1995, 2007). RSA in the resting stage is a predictor of both concurrently and prospectively affective responses to stress (Bornas et al., 2005; Friedman, 2007). Some studies revealed that RSA reactivity, that is, changes of RSA in individuals exposed to external stimulus from RSA in the resting state, could also reflect emotion changes (Gentzler et al., 2009; Fortunato et al., 2013; Utendale et al., 2014). According to polyvagal theory, RSA suppression (RSA reactivity decreases from baseline) is an adaptive response to stressors, while RSA augmentation (RSA reactivity increases from baseline) indicates successful emotion regulation (Porges, 1995). Numerous studies indicated that individuals with anxiety disorders tend to show lower RSA in resting state and reactivity than controls (Cohen et al., 1998; Jovanovic et al., 2009; Blom et al., 2010). Moreover, the amount of RSA suppression positively correlated with anxiety levels (Fortunato et al., 2013; Graziano and Derefinko, 2013). Therefore, RSA suppression in individuals with specific math anxiety might be larger compared with individuals without specific math anxiety when they perform math tasks. RSA suppression might also play a link between specific math anxiety and performance in math tasks. Yet this hypothesis has never been tested.

A total of 386 students from the seventh grade (235 students) and eighth grade (151 students) in a junior middle school of Xi'an participated in this study. All students were native Chinese speakers with normal vision and hearing abilities. Each student's parental education was recorded as the highest diploma obtained, coded on a 1–8 scale (1: primary school, 2: junior school, 3: senior school, 4: junior college education, 5: university, 6: master, 7: doctor, 8: post-doctoral). Ethics approval for the study was granted by Shaanxi Normal University. The study was consented by all the participants, their parents, and their teachers. A total of 104 students selected from these 386 students participated in math and reading tasks while their RSAs were recorded.

Mathematics Anxiety Rating Scale (R-MARS) was used to measure math anxiety (Plake and Parker, 1982). A total of 21 items were included in the scale with a 1–5 Likert scale from 1 (not anxious) to 5 (very anxious). The participants needed to rate the degree of their anxiety affect in each situation. Scores ranged from 21 to 105. Higher summed scores indicate higher math anxiety. Cronbach's α for this scale is 0.92.

A Chinese reading anxiety scale revised based on the Foreign Language Reading Anxiety Scale (FLRAS) (Saito and Samimy, 1996) was adopted to measure reading anxiety. Participants answered the 20 items on a 1–5 Likert scale, with a higher score indicating more anxiety. The score ranged from 20 to 100. The scales' reliability and validity were good (Cronbach's α = 0.87).

A subscale of the trait anxiety inventory (T-AI) from the revised State–Trait Anxiety Inventory (STAI) was used to measure the trait anxiety of each student (Spielberger, 1983). Trait anxiety refers to an individual's anxious or worrying dispositions in general (Spence, 1997). Participants indicated how often they experienced the situations illustrated in the statements such as “I feel happy” and “I lack self-confidence” using a 1–4 Likert scale with 1 labeled “not at all” and 4 labeled “almost always.” There were 20 items in total. The score ranged from 20 to 80. This scale has adequate internal consistency (Cronbach's α = 0.82).

The math task was created using the Python software and included four types of one-digit arithmetic operations: additions, subtractions, multiplications, and divisions. For example, “1+9=.” Each operation consisted of 20 trials. There were 80 trials in total. Problems were presented in size 72, black Arial style font. The operations were randomly presented on the computer screen with one operation per presentation. In each presentation, two answer options were provided below each operation on the computer screen, with one number on the left side and the other on the right side. Participants were asked to press F (if the number on the left side is correct) or J (if the number on the right side is correct) on the keyboard as quickly and as accurately as possible to choose the correct answer when they saw the numbers and operations on the computer screen. Reaction time (RT) was recorded and measured from the onset of the presentation of the numbers and operation in each trial until participants made a response. Before formal experiment, each individual performed a practical block to familiarize the protocol. Response accuracy and RT of each individual were recorded via a computer.

SOMNOtouch RESP (SOMNOmedics, Germany) was used to collect electrocardiogram (ECG) data at a sampling rate of 256 Hz during the completion of math and reading tasks of each participant, with electrodes placed on each participant's ribs and clavicles. R-waves were identified in DOMINO light software 1.4.0 (SOMNOmedics, Germany) automatically and by a researcher manually and then processed in the Interbeat Interval (IBI) Analysis System. Data with artifacts were detected and excluded from the analysis. The R–R intervals required for spectral analysis was obtained by linear interpolation at 4 Hz. Then data were further detrended by a smoothness prior approach (Tarvainen et al., 2002). IBI power spectra were generated by an autoregressive algorithm (Tarvainen et al., 2002). RSA was computed by the logarithm value of the high-frequency IBI power spectra. The RSA baseline was recorded 3 min before the start of each task. RSA reactivity was defined as “RSA in task – RSA baseline.”

Table 1. Demographical data, behavioral scores and RSA reactivity in math and reading tasks of each group. 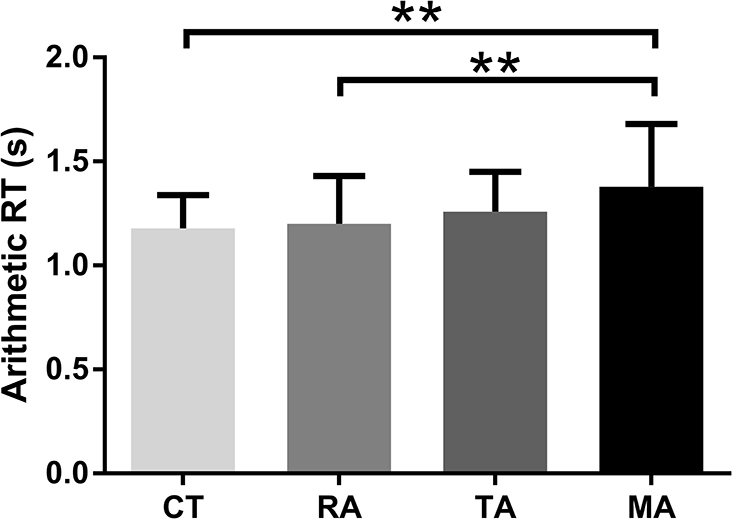 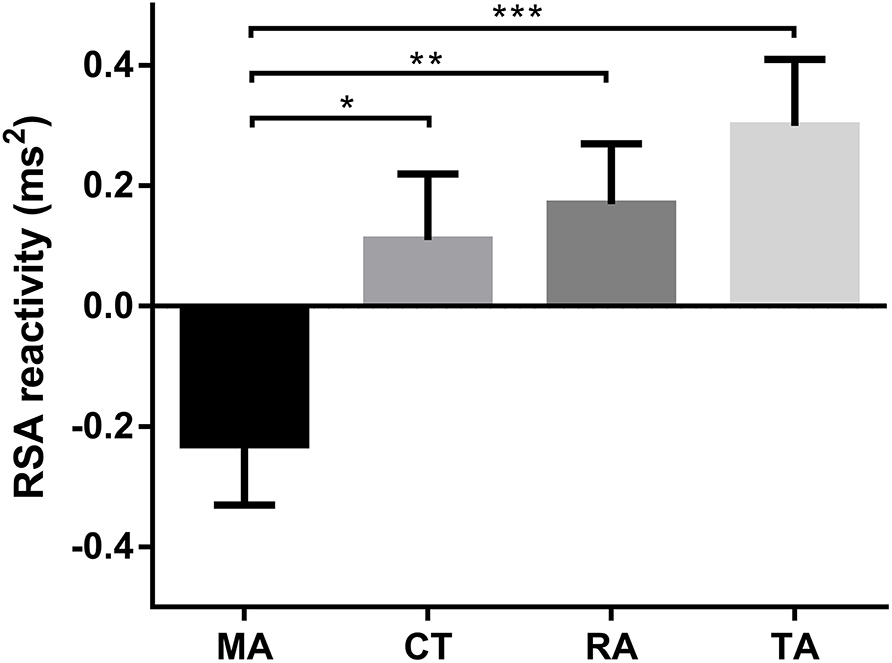 Table 2. Correlations of all measurements. 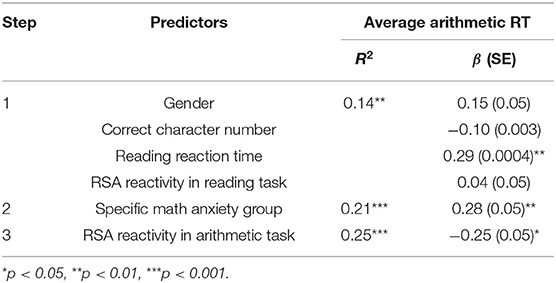 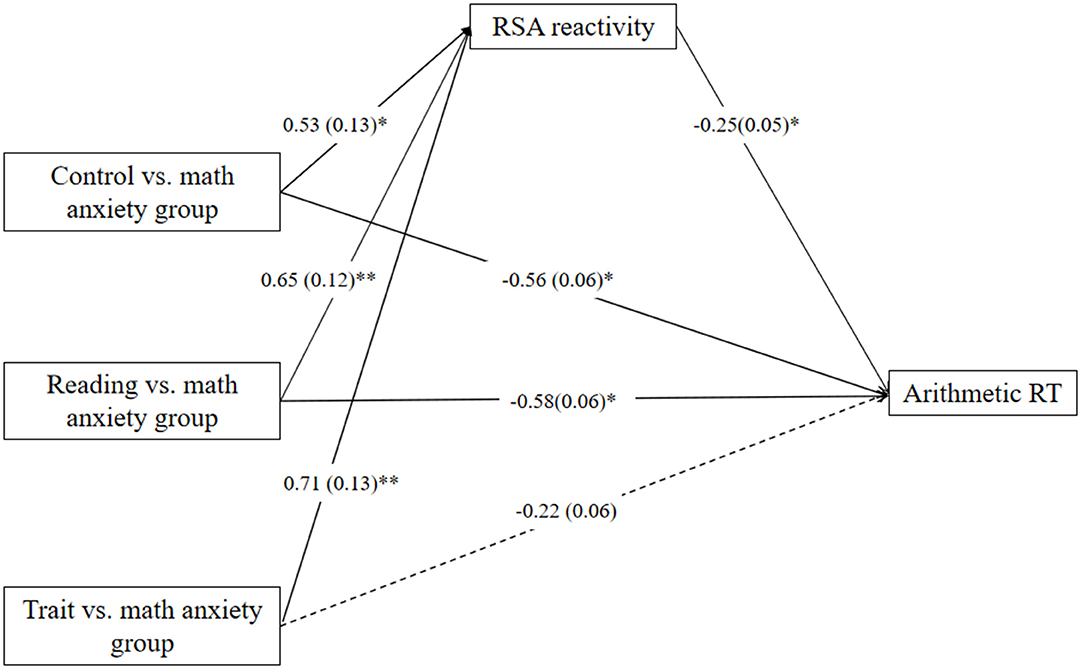 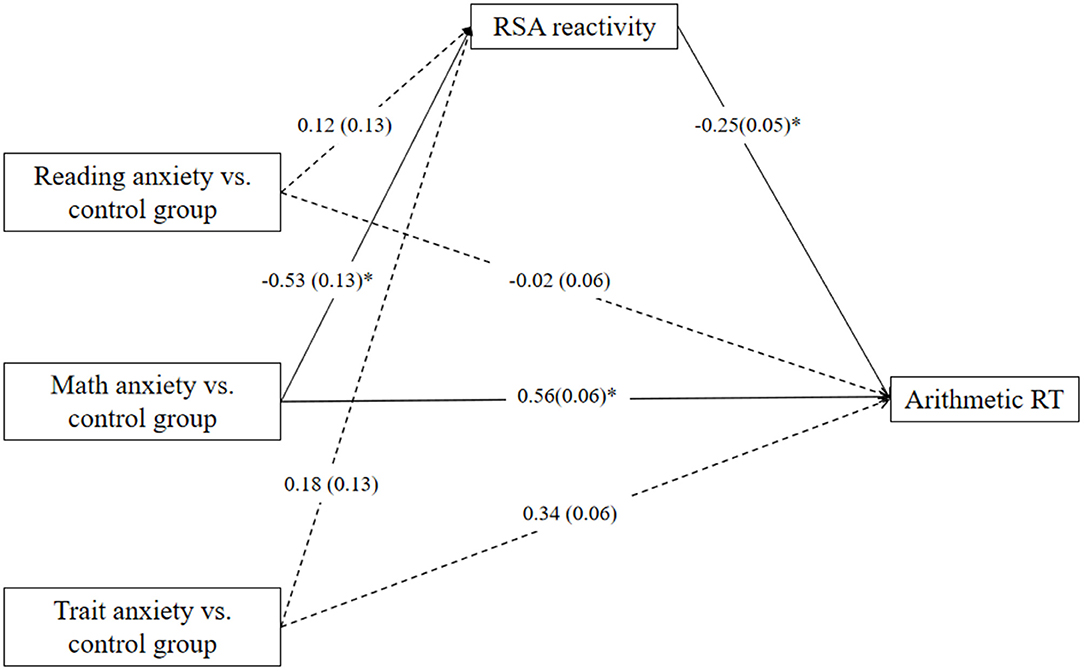 Admittedly, there are some limitations in the present study. Firstly, our results are merely correlational and cannot provide conclusions concerning the causal effect of affective math anxiety on math performance. Longitudinal or experimental studies would be needed to examine this issue. Secondly, we only adopted one-digit arithmetic tasks in the present study. It might be valuable to manipulate arithmetic task difficulty or examine other math problems with physiological responses recorded in individuals with various levels of math anxiety. Thirdly, a subsample of participants were selected to participate in the present study which restrained us from performing a mediation analysis with math anxiety as a continuous independent variable and draw a broader conclusion for the nature of math anxiety. Future studies would be valuable to collect RSA from the whole sample and should conduct mediation analysis in the whole sample, in order to provide a more comprehensive insight into the role of RSA in the relation between math anxiety and arithmetic speed. As math anxiety of the participants in the subsample of the current study still followed a normal distribution (see Supplementary Table S1), we ran a mediation model with math anxiety as a continuous independent variable as a complement, and results revealed a mediation effect of RSA between math anxiety and arithmetic speed in the current subsample (see Supplementary Figure S1). Finally, there is possibility that other affective and physiological mediators, such as cortisol, exist to explain the individual difference in math achievement. Future studies including other physiological measurements can further investigate this issue.

The studies involving human participants were reviewed and approved by Committee on Human Research Protection of Shaanxi Normal University. Written informed consent to participate in this study was provided by the participants' legal guardian/next of kin.

We thank all the participants for their participation. We also thank Li Liu for sharing the reading task.

The Supplementary Material for this article can be found online at: https://www.frontiersin.org/articles/10.3389/fpsyg.2021.615601/full#supplementary-material

Copyright © 2021 Tang, Su, Yao, Peyre, Guez and Zhao. This is an open-access article distributed under the terms of the Creative Commons Attribution License (CC BY). The use, distribution or reproduction in other forums is permitted, provided the original author(s) and the copyright owner(s) are credited and that the original publication in this journal is cited, in accordance with accepted academic practice. No use, distribution or reproduction is permitted which does not comply with these terms.