The Dark Triad (DT) refers to the three socially aversive, yet non-pathological, traits of Machiavellianism, psychopathy, and narcissism (Paulhus and Williams, 2002). The DT traits predict a wide range of workplace, educational, mating, interpersonal, and antisocial behaviors and tendencies (Furnham et al., 2013) as well as mental well-being (Aghababaei and Błachnio, 2015). In the present study, it was hypothesized that the lay conceptions of happiness (i.e., beliefs about the nature, value, antecedents, and outcomes of happiness; Joshanloo, 2019) would mediate the relationship between the DT and mental well-being. Eight conceptions of happiness were included in this study. The outcome variables of the study consisted of three hedonic (life satisfaction, positive affect, and negative affect) and two eudaimonic (psychological and social) elements of well-being. All variables of the study are defined in Table 1.

Table 1. Definitions of the variables used.

Although the direction of causality has not been investigated between these variables, and cannot be addressed in cross-sectional studies, given that personality traits are generally more deep-rooted and stable than beliefs, the direction of causality is more likely to run from the DT to the conceptions of happiness. The DT traits are fairly stable over time (Zettler et al., 2020) and there is evidence of their high levels of heritability (Schermer and Jones, 2020). Lau and Marsee (2012), for example, showed that DT-related behaviors were already evident in ages 11–17. Thus, along with other personality traits and environmental influences, the DT traits provide the context for the formation of personal beliefs concerning well-being.

It is hypothesized in this study that conceptions of happiness are among the mediating pathways through which the DT traits influence well-being. One’s level of the DT traits would partly determine an individual’s beliefs surrounding well-being, which per se influence experienced levels of well-being. A Korean sample was used to test this hypothesis. Due to an overall lack of prior literature on the topic, this study sought to explore these associations with no specific hypotheses made a priori with regards to the individual conceptions. However, the available evidence reviewed above does seem to support a number of general expectations:

1- Machiavellianism and psychopathy would be negatively and narcissism would be positively associated with well-being.

4- Conceptions of happiness would partially mediate the relationship between the DT and well-being.

The sample consisted of 1,177 Korean participants (average age = 40.955, SD = 12.097, females = 51.1%). The participants were recruited through a data collection agency, and received monetary compensation. Participants who did not respond correctly to the three attention check questions, were excluded. A part of the data was used in a previous study (Joshanloo, 2019) to answer a different research question (i.e., investigating the construct validity of the conceptions of happiness).

The Satisfaction With Life Scale (Diener et al., 1985) was used to measure life satisfaction (α = 0.920). Each of the five items is rated on a 7-point scale ranging from 1 = strongly disagree to 7 = strongly agree. The Negative And Positive Affect Scale (Mroczek and Kolarz, 1998; Joshanloo, 2017a) was used to measure positive and negative affect. The scale includes six items for negative affect (e.g., nervous, α = 0.877) and six items for positive affect (e.g., cheerful, α = 0.924). Respondents indicate how much of the time (ranging from 1 = none of the time to 5 = all of the time) during the past 30 days they felt each of the affective states. The Social and Psychological Well-Being subscales of the Mental Health Continuum-Short Form (Keyes, 2006) were used to measure social (five items, α = 0.813) and psychological (six items, α = 0.900) well-being. The items are responded to on a 6-point scale ranging from 0 = never to 5 = every day. To calculate a global well-being score for each person, negative affect was subtracted from the sum of the other four variables, after z-transforming the five well-being variables1.

Items were recoded when needed, such that higher scores indicate higher levels of the variables. The total score for each variable was calculated by averaging the responses to the items of that variable. All of the scales were translated into Korean by a team of bilinguals, research assistants, and university professors using back-translation, collaborative, and iterative translation procedures (Douglas and Craig, 2007).

Table 2. Intercorrelations between the variables of the study. 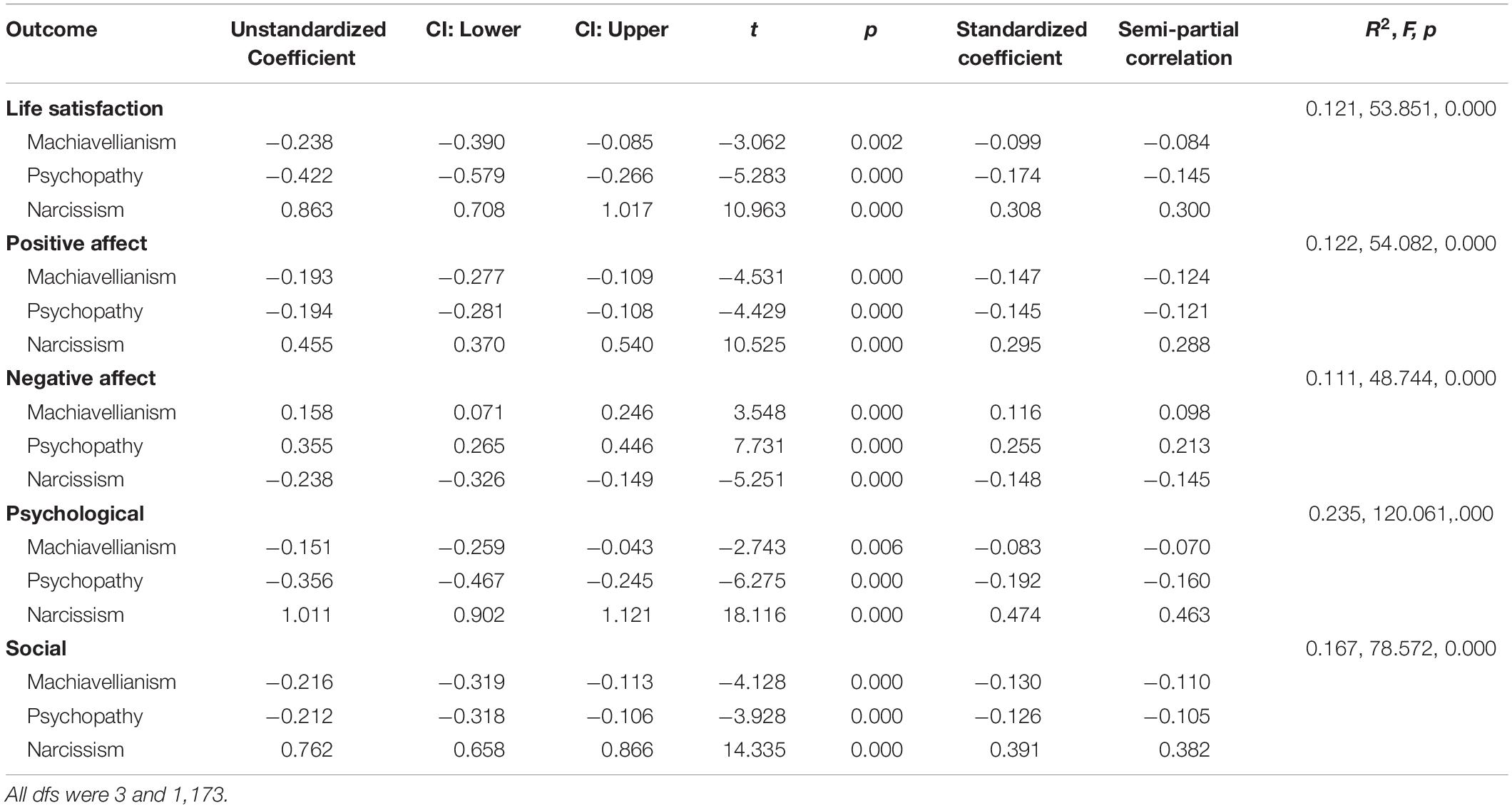 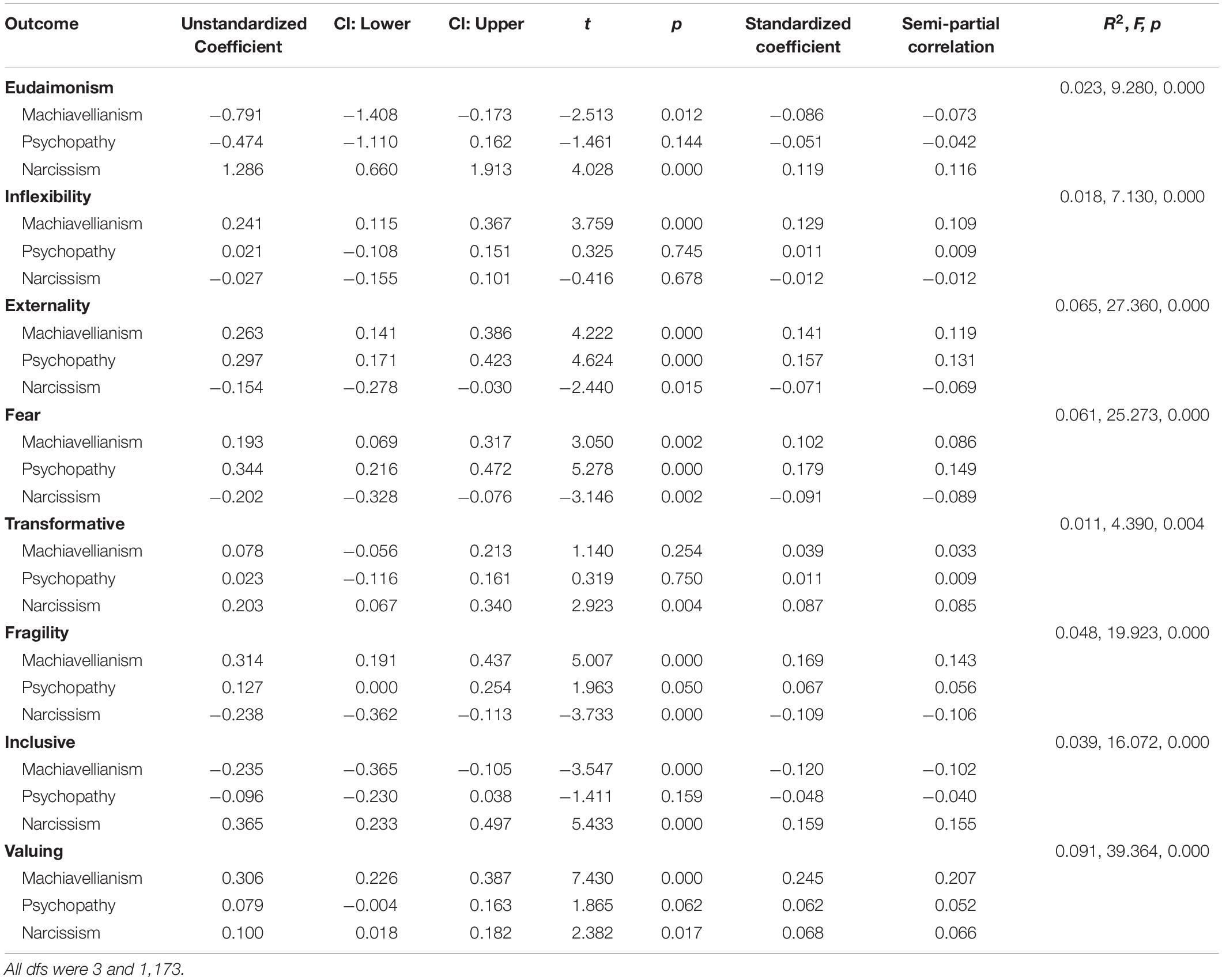 Table 5. The dark triad and conceptions as predictors of global well-being. 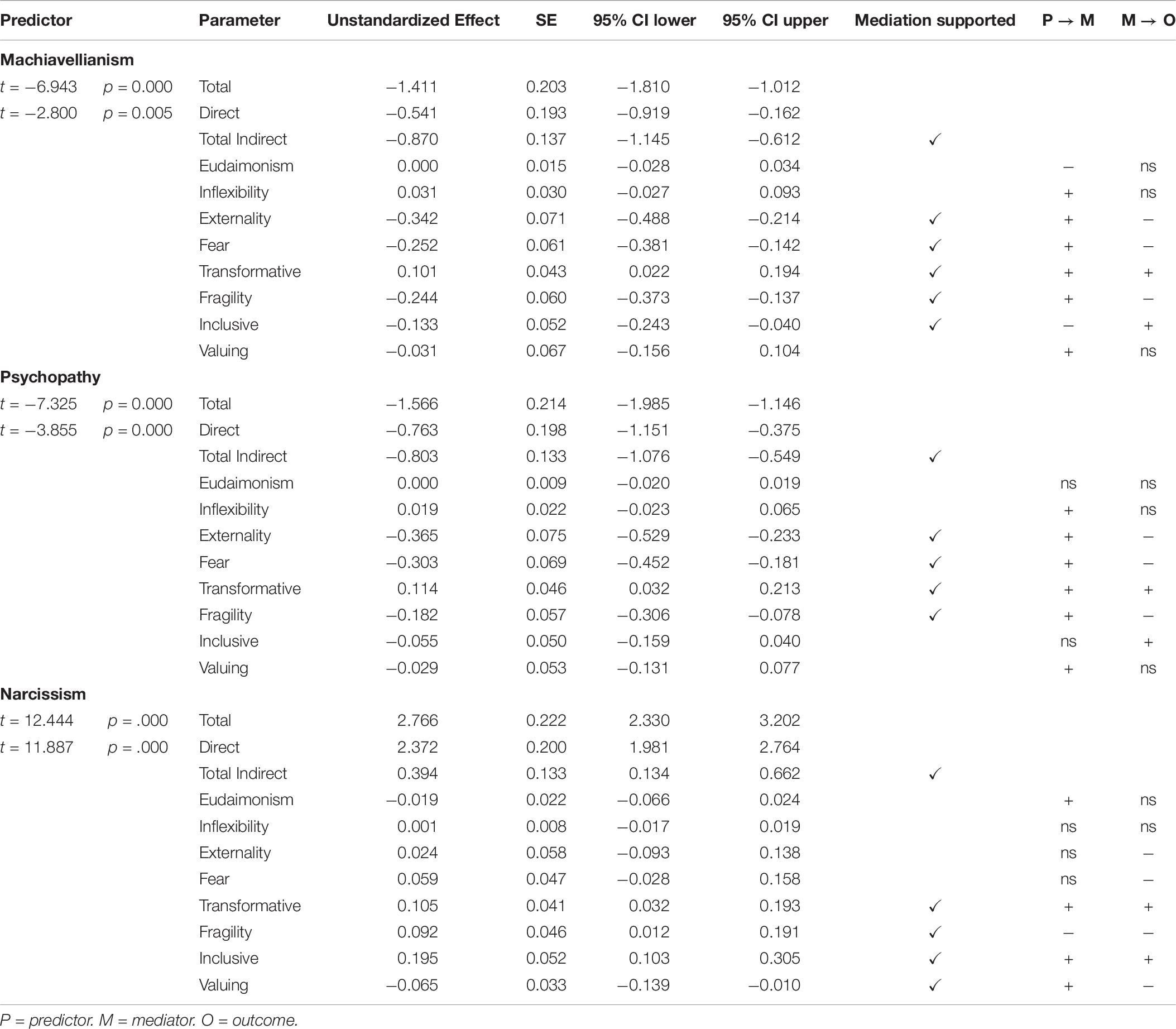 In line with the prior research (e.g., Aghababaei and Błachnio, 2015), the present results showed that Machiavellianism and psychopathy were negatively and narcissism was positively associated with well-being. The DT traits were better predictors of psycho-social well-being than subjective well-being, which is consistent with evidence that eudaimonic well-being depends more heavily than hedonic well-being on self- and impulse-control capacities (Joshanloo et al., 2021). People who score high on the DT (particularly psychopathy) are likely to show hampered self-control, which is likely to undermine eudaimonic more than hedonic well-being.

Narcissism has been found to predict an array of adaptive outcomes in previous research, which may explain its positive linkage to well-being. For example, narcissism is associated with lower neuroticism (Lahey, 2009), higher assertiveness (Samuel and Widiger, 2008), self-esteem (Sedikides et al., 2004), higher likelihood of being chosen for leadership positions (Dowgwillo et al., 2016), and better dating outcomes (Jonason et al., 2010). However, the positive link between narcissism and well-being can also be looked at from two other angles. Firstly, the scale of narcissism used in this study predominantly measures the relatively adaptive features of narcissism (e.g., grandiosity and positive self-regard), leaving out more maladaptive features (e.g., exploitativeness and narcissistic fragility), which may inflate the associations with well-being. Secondly, narcissists show a tendency for socially desirable responding and self-enhancement biases (John and Robins, 1994; Kowalski et al., 2018), which may affect their responses to well-being questions. It remains for future research to shed further light on the nature of narcissism-well-being linkages.

The present results showed that Machiavellianism and psychopathy were associated with conceptions that undermine well-being, whereas narcissism was generally associated with conceptions that facilitate well-being. The strongest associations were found between the DT and three conceptions valuing, externality, and fear. Thus, Machiavellianism and psychopathy are linked to the cluster of beliefs that indicate a “doubtful pursuit” of happiness (Joshanloo, 2019), where happiness is valued, but is considered to be out of one’s control, and to have negative consequences when achieved. A previous study also showed that callous/unemotional tendencies were associated with conceiving happiness as inflexible, uncontrollable, and external (Tullett and Plaks, 2016).

In sum, the present results indicate that people high on Machiavellianism and psychopathy do value and pursue happiness, but they have doubts about the consequences of happiness and their levels of personal control over it. It seems that these two traits prompt the individual to take a competitive approach to obtaining happiness rather than a collective and collaborative approach, where even achieving happiness may cause troubles (e.g., happiness may induce a sense of rivalry or envy in others). This cluster of beliefs is compatible with the selfish, nihilistic, and cynical aspects of the DT, accompanied by the perception that the world is a hostile and competitive place (Rauthmann and Kolar, 2013). People high on narcissism, on the other hand, endorsed more positive notions of well-being, which can partly explain narcissism’s positive links with well-being.

The limitations of the study should be acknowledged. For example, given the cross-sectional nature of the study, the direction of causality between the variables could not be ascertained, and thus future longitudinal and experimental studies are certainly needed. Furthermore, in light of the cross-cultural differences reported in the levels of the DT (Jonason et al., 2020), the present results need to be replicated in other national samples before more definitive conclusions can be drawn. Despite these limitations, this study is the first to show that the DT traits are associated with beliefs surrounding well-being, and provide evidence in support of the hypothesis that people with various levels of the DT traits gravitate towards certain notions of well-being that are per se beneficial or detrimental to well-being.

The raw data supporting the conclusions of this article will be made available by the authors, upon reasonable request.

The studies involving human participants were reviewed and approved by The Institutional Review Board of Keimyung University. The patients/participants provided their written informed consent to participate in this study.

This work was supported by the Ministry of Education and the National Research Foundation of the Republic of Korea (NRF-2017S1A3A2066611).

The Supplementary Material for this article can be found online at: https://www.frontiersin.org/articles/10.3389/fpsyg.2021.643351/full#supplementary-material

Joshanloo, M. (2013). The influence of fear of happiness beliefs on responses to the satisfaction with life scale. Pers. Individual Diff. 54, 647–651.

Joshanloo, M. (2017b). Mediators of the relationship between externality of happiness and subjective well-being. Pers. Individual Diff. 119, 147–151.

Copyright © 2021 Joshanloo. This is an open-access article distributed under the terms of the Creative Commons Attribution License (CC BY). The use, distribution or reproduction in other forums is permitted, provided the original author(s) and the copyright owner(s) are credited and that the original publication in this journal is cited, in accordance with accepted academic practice. No use, distribution or reproduction is permitted which does not comply with these terms.

Positive and Negative Psychosocial Outcomes of the “Dark” Personality Traits