Faculty of Psychology and Education Science, University of Porto, Portugal

Fatima A. Merchant1,3 and

A difficulty for both patients and researchers when studying expectations of or preferences for breast reconstruction outcomes is that it is cumbersome to measure the patient’s mental images of possible future states of her body. For example, Mace et al. (2021) analyzed conversations between breast reconstruction patients and their surgeons about breast asymmetry. The patients used a combination of gestures to their body, anecdotes, and descriptions of their emotions to express their concerns about asymmetry, which the surgeon had to interpret to fully understand their concerns. An important surgical outcome that is arguably the easiest for patients to articulate their thoughts about is breast size. There are straightforward ways that a woman can communicate an approximation of her preferred or expected post-reconstruction breast size, such as by bra cup size or by indicating larger, smaller, or about the same size as her pre-reconstruction breast size. In addition, there are established methods to objectively and quantitatively measure breast size, such as breast volume on 3D photography, that may be useful for relating to the patient’s preferences or expectations. For these reasons, this study focused on women’s preferences for a change in their breast size. The goal of this study was to identify factors that are associated with preference for change in breast size for women undergoing breast reconstruction at an American medical institution.

The study population consisted of women who underwent breast reconstruction at The University of Texas MD Anderson Cancer Center in the United States from 2011 to 2014. As part of an institutionally reviewed research project (IRB #2010-0321) (Reece et al., 2015), medical record, demographic, 3D torso images, and psychosocial health data were collected pre-reconstruction and at 6, 9, 12, 18, and 18+ months after patients’ initial reconstructive procedure. 3D photographs (surface scans) of the patients’ torsos were collected with a customized 3dMDTorso System (3dMD, LLC, Atlanta, GA). All participants provided informed consent.

For this study sample, participants were selected who: underwent reconstruction after a skin-sparing total mastectomy and had complete data, including a baseline stated preference for maintaining/changing breast size, as well as 3D images and Body Image Scale scores collected pre-/post-operatively (i.e., at baseline and after the initial reconstructive surgery).

Two authors (KN and TB) measured breast volume on the 3D photographs using proprietary software developed by our team (Lee et al., 2011). Ptosis was graded by an experienced reconstructive surgeon (GR) from the clinical photographs on a scale of 0–3, with 0 indicating no ptosis.

We then summarized the distributions of women’s clinical and psychosocial data amongst the preference groups (i.e., smaller than now, about the same, and bigger than now) using box and whisker plots. Univariate analyses assessed differences of variables amongst preference groups. Kruskal-Wallis and Wilcoxon Rank Sum tests with Bonferroni correction were used for continuous data types (e.g., age, breast volume), and Chi-square tests were used for categorical data (e.g., Relationship Status).

Forty-eight patients met the criteria for this study. All patients indicated female as their biological sex. At baseline, the mean age was 46 ± 9 years, mean BMI was 26.7 ± 4.5 kg/m2, and 41 (85%) were White. Reconstruction types included 30 (63%) implant, 14 (29%) autologous (TRAM and DIEP), and 4 (8%) implant plus autologous. Thirty-one patients (65%) had reconstruction on both breasts. Supplementary Figure 1 shows the patient sample selection process. Table 1 presents the patient characteristics data. 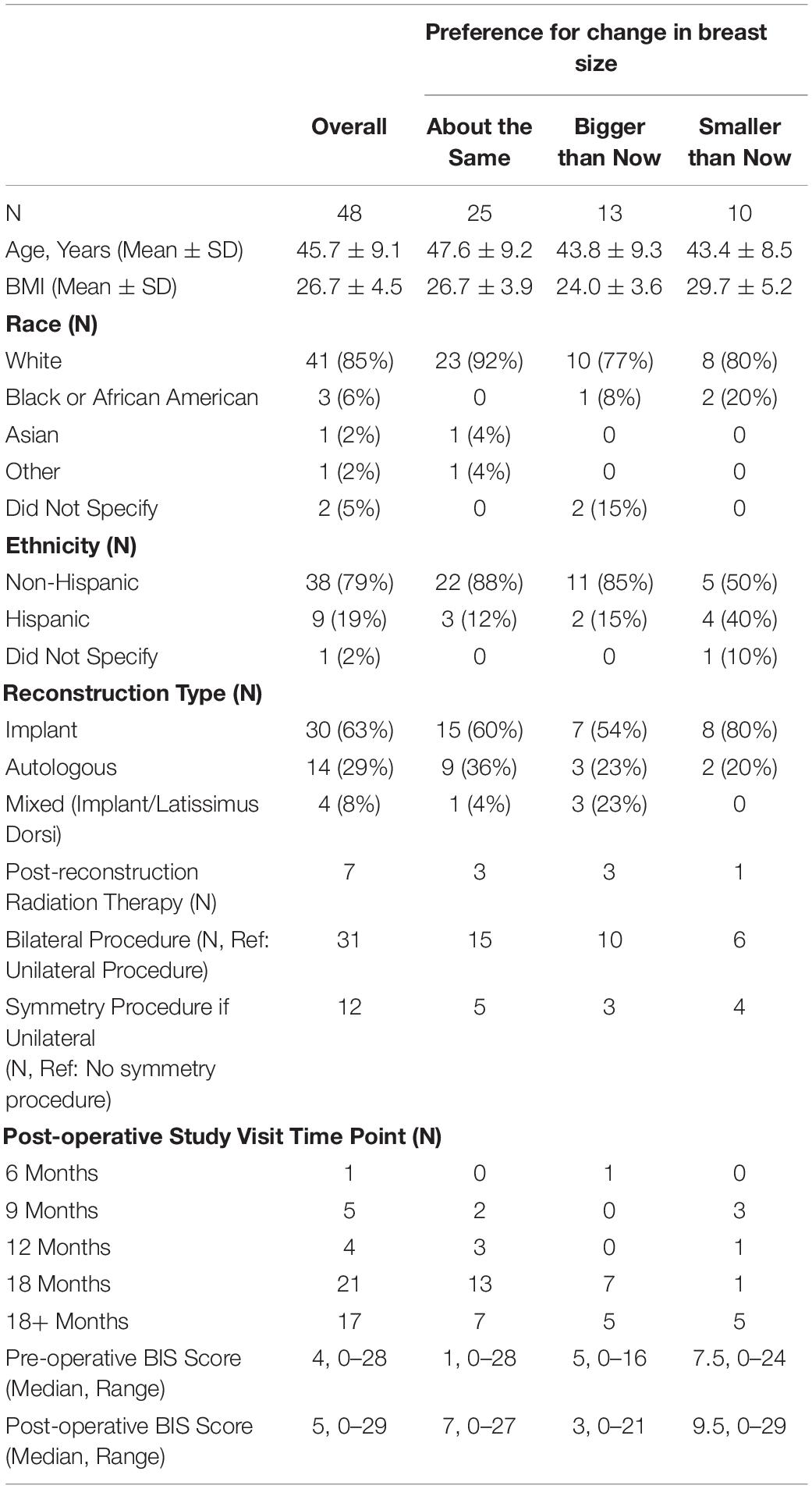 Figure 2. Relationships between patients grouped by their preferences for change in breast size with potential covariates. Four categories of variables were selected as potential covariates: clinical, demographic, psychosocial, and the BREAST-Q. Variables with significant differences amongst the groups are marked with asterisks. Average breast volume (Clinical variable) is depicted in Figure 1.

Three psychosocial variables differed amongst preference groups to the point of statistical significance. Women who preferred a change in breast size (“bigger than now” and “smaller than now” groups) were significantly less satisfied with their baseline breast size than the women who preferred to remain their current size (p < 0.001, Kruskal-Wallis test). Satisfaction with weight was also significantly less for women in the “smaller than now” group than the other two groups (p = 0.013, Kruskal-Wallis test). The BREAST-Q Satisfaction with Breasts module also revealed less satisfaction amongst the “bigger than now” and “smaller than now” patients compared to “about the same” patients (p = 0.016, Kruskal-Wallis test). Body image concerns, appearance investment, and depression levels did not significantly differ amongst groups. Supplementary Table 1 contains the complete statistical comparisons amongst preference groups. 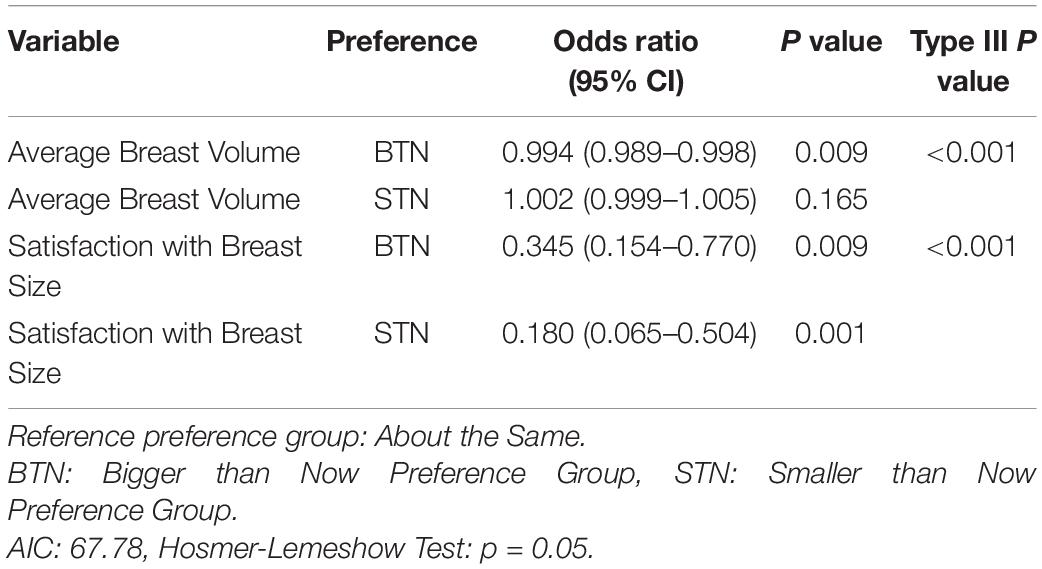 Multinomial logistic regression provided additional evidence for this Goldilocks principle. From Table 1, patients with smaller breast volumes are significantly more likely to choose “bigger than now” than “about the same.” Patients with larger breast volumes tend to choose “smaller than now” more so than “about the same.” The regression analysis also highlighted the importance of satisfaction with breast size. Greater dissatisfaction with ones’ breast size was indicative of a preference for change. Patients’ feelings about their breast size after reconstruction appears to be driven mostly by their prior feelings and experiences about their breast size. In our study, psychological distress was not a significant factor, but our sample included only a few patients experiencing psychological distress. For patients experiencing more psychological distress as they undergo cancer care, their emotional state may serve to amplify the desire to change their breast size in order to try to alleviate negative emotions. Acute distress may also hinder patients from accurately stating their desires.

An interesting area of future research would be to investigate whether reconstruction patients actually achieve their preferred breast size. Consider a plausible but admittedly arbitrary cut-off of 20% on the average volume percent change to discretize breast size change, where average volume percent change is calculated by the average of for each breast. Applying this simple definition to our sample, about half of the patients in the “bigger than now” group, 64% of the women in the “about the same” group, and 80% in the “smaller than now” group achieved their preference (Supplementary Figure 2). However, we note that such a definition of preference attainment does not take into account the patient’s opinion about whether her final breast size matches her preference. For example, this simple definition would consider a patient who wanted to be bigger and who’s breast size increased by 25% to have achieved her preferred breast size, but it is possible that she actually wanted to be 50% larger. We emphasize that future studies of preference achievement for change in breast size should carefully consider the trade-offs between different approaches to measuring achievement.

Future work on the psychosocial impacts of holding a particular preference and/or preference achievement could inform how patients and providers make decisions about breast reconstruction. For example, we see an interesting trend in our sample for the “bigger than now” group versus the other preference groups in our sample (Supplementary Figure 2). 77% of the “bigger than now” patients reported a positive change in their body image, compared to only 11% of the other two groups. A possible explanation of this result is that the body image concerns of the “bigger than now” patients are focused more around their breasts than other aspects of their bodies. This is supported by their high satisfaction with weight but low satisfaction with breast size. After reconstruction, their body image concerns around their breast size are alleviated. Patients in the “about the same” and “smaller than now” groups report less satisfaction with weight, and those body image concerns are more likely to persist after reconstruction. For some women, when their breast size is changed, they may develop more concerns about other areas of their body. In addition, reconstruction of larger breasts is technically challenging from a surgical perspective and so tends to result in poorer outcomes. Prior studies have found larger breast size (mastectomy weight) to be a risk factor for reconstruction complications (Woo et al., 2016). New body image concerns may also arise around other breast aesthetic factors after reconstruction surgery, such as symmetry, scarring, and shape.

There is a considerable body of prior work on patients’ expectations or lack of expectations about their reconstruction outcomes (Snell et al., 2010; de Boer et al., 2015; Flitcroft et al., 2017). While expectations are not consistently measured or defined (Flitcroft et al., 2017), they are often framed around whether patients have received enough accurate information to have realistic expectations about their results. A unique aspect of this study is our focus on preferences about physical appearance, as opposed to expectations. For example, a patient may prefer that her breasts remain about the same size as they are now, but also expect that her breasts will be smaller after surgery because her care team has explained the limitations of the procedure. Prior research suggests that meeting expectations can be an important factor for patient satisfaction and some psychosocial well-being outcomes (Flitcroft et al., 2017). Our study demonstrates the need for more research on the potential role that patient preferences and preference attainment plays in the psychosocial outcomes of breast reconstruction.

The primary limitation of this study is limited sample size. A larger, more diverse study population may reveal different trends or stronger statistical evidence to consider patients’ preferences as well as their expectations.

In conclusion, preliminary evidence is demonstrated for a Goldilocks principle in preferences for change in breast size for women undergoing breast reconstruction. Women with breast sizes on both the lower and upper range expressed greater dissatisfaction with their current (pre-operative) size and preferred a change toward the mean. Regression analysis supported the concept that women’s preferences for breast size after reconstruction are primarily formed by their satisfaction with their current breast size. Acute psychosocial distress resulting from cancer and its treatment may also reinforce a desire for change, or impede expressing their preferences. The results of this study pose opportunities for future research on the psychosocial effects of holding a particular preference and/or achieving one’s preference for change in breast size in the context of breast reconstruction.

The datasets presented in this article are not readily available because the data used in this study are restricted to protect patient confidentiality and privacy. Access to the data is available only with permission from The University of Texas MD Anderson Cancer Center Institutional Review Board. Requests to access the datasets should be directed to MM.

The studies involving human participants were reviewed and approved by The University of Texas MD Anderson Cancer Center Institutional Review Board. The patients/participants provided their written informed consent to participate in this study.

The Supplementary Material for this article can be found online at: https://www.frontiersin.org/articles/10.3389/fpsyg.2021.702816/full#supplementary-material

Copyright © 2021 Nicklaus, Bui, Bordes, Liu, Chopra, Hoffman, Reece, Hanson, Merchant and Markey. This is an open-access article distributed under the terms of the Creative Commons Attribution License (CC BY). The use, distribution or reproduction in other forums is permitted, provided the original author(s) and the copyright owner(s) are credited and that the original publication in this journal is cited, in accordance with accepted academic practice. No use, distribution or reproduction is permitted which does not comply with these terms.

Psychosocial Adjustment to Illness: Positive Adaptation and the Role of Body Image