Adult rodent skeletal muscles are composed of four types of myofibers (Schiaffino and Reggiani, 1996, 2011; Bassel-Duby and Olson, 2006), which are present in different proportions in different muscles. Slow-twitch (type I) fibers have fatigue resistance properties by virtue of large numbers of mitochondria. The remaining three types are fast-twitch (type II) fibers, subclassified as types IIA, IIX, and IIB. Of these, type IIA fibers exhibit the slowest shortening velocity and display fatigue resistance due to a high density of mitochondria. Conversely, type IIB fibers have the fastest shortening velocity and exhibit exercise intolerance due to a low density of mitochondria, while type IIX fibers are intermediate. Although the predominant fiber types in each muscle are determined during embryonic and fetal myogenesis (Lu et al., 1999; Agbulut et al., 2003), functional adaptations can lead to the alteration of these proportions through changes in gene expression (Swoap et al., 2000; Oh et al., 2005).

In humans, long-term resistance training not only induces muscle hypertrophy but also increases the proportion of slower muscle fibers by increasing and decreasing the number of type IIA and type IIX fibers, respectively (Hather et al., 1991; Adams et al., 1993; Williamson et al., 2001; Bickel et al., 2011). Like resistance training, mechanical overload (MOV, also called chronic overload) by synergistic ablation of the soleus and gastrocnemius muscles induces hypertrophy in the plantaris muscles. MOV also modifies the fiber type proportions in the plantaris muscles toward slower fibers by shifting type IIX and IIB fibers to type I and IIA fibers, through the activation of multiple genes related to muscle contractility in mice (Karasseva et al., 2003; Ji et al., 2007; McGee et al., 2008; Pérez-Schindler et al., 2013). We previously showed that MOV increases Vgll2 protein expression and activity, enhancing the functional adaptation of skeletal muscle (Honda et al., 2019). In addition, mice lacking Vgll2 exhibited limited fiber type transition after MOV due to the repression of slow muscle genes, which are increased by MOV in wild-type mice. Vgll2 KO mice also displayed downregulated expression of several genes involved in oxidative metabolism. Thus, Vgll2 is essential for the fast-to-slow shift of muscle fibers after MOV and acts by regulating the expression of downstream genes at the transcriptional level (Honda et al., 2019). However, gene expression changes downstream of Vgll2 in skeletal muscle subjected to MOV have not been systematically identified. To examine molecular network changes in skeletal muscle after MOV, we conducted a comparative gene expression analysis in wild-type and Vgll2 KO mice under both sedentary and MOV conditions. Raw data files have been deposited to the Sequence Read Archive of the DNA Data Bank of Japan (DDBJ) under Accession No. DRA008472.

Vgll2 KO mice and wild-type littermates on a C57BL/6J background were generated as previously described (Honda et al., 2017) and housed in cages at 24°C with a 12:12-h light–dark cycle. Animal experiments were approved by the Animal Care and Use Committee of the National Cerebral and Cardiovascular Center in Japan and conducted under institutional and national guidelines.

MOV was performed as previously described (McGee et al., 2008; Honda et al., 2019). In brief, for synergistic ablation of the plantaris, the soleus and gastrocnemius were surgically removed from 10-weeks-old male wild-type littermates (Wild_MOV) and Vgll2 KO mice (KO_MOV) under anesthesia (2.5% isoflurane). Mice that underwent sham surgeries were used as controls (Wild_sham, KO_sham). To explore the results of long-term effects of MOV, 6 weeks after surgery, the mice were sacrificed, and the plantaris muscles were collected and submerged in RNAlater (Thermo Fisher Scientific, Waltham, MA, USA) for RNA isolation.

Table 1. Summary of the sequencing results.

Statistical analysis of RNA-Seq data was performed as previously described (Hitachi et al., 2019). In brief, to count the aligned reads, HTSeq ver. 0.6.0 software (Anders et al., 2015) was used against the Mus_musculus_UCSC_mm10.gtf file with the optional command “–stranded=no –format=bam”. We compared gene expression levels in Wild_sham mice with those in Wild_MOV, KO_sham, and KO_MOV mice using DESeq2 software ver. 1.12.4 (Love et al., 2014) using the Wald test. Differentially expressed genes with a false discovery rate (adjusted P-value, padj) <0.001 and log2-fold change >1 or <-1 were considered significant. The expression levels of all genes in each experimental group are listed in Table S1.

Using these parameters, we identified 454 differentially expressed genes (398 upregulated and 56 downregulated) after MOV in wild-type mice. Although in the absence of MOV, statistically significant expression changes were observed in only 18 genes (11 upregulated and 7 downregulated) in Vgll2 KO mice compared to wild-type mice; in the presence of MOV, the expression levels of 1,889 genes (1,336 upregulated and 553 downregulated), including a majority of genes whose expression was altered by MOV in wild-type mice, were significantly altered in Vgll2 KO mice compared with wild-type mice subjected to the sham operation (Figure 1A). Intriguingly, although Vgll2 is required to activate the expression of genes involved in the shift from fast to slow muscle fibers by MOV (Honda et al., 2019), Vgll2 deficiency eventually enhanced the effects of MOV on gene expression (Figure 1B). Therefore, these results suggest that Vgll2 plays a role in the functional adaptation of skeletal muscle by MOV beyond the fast-to-slow shifting of muscle fibers. 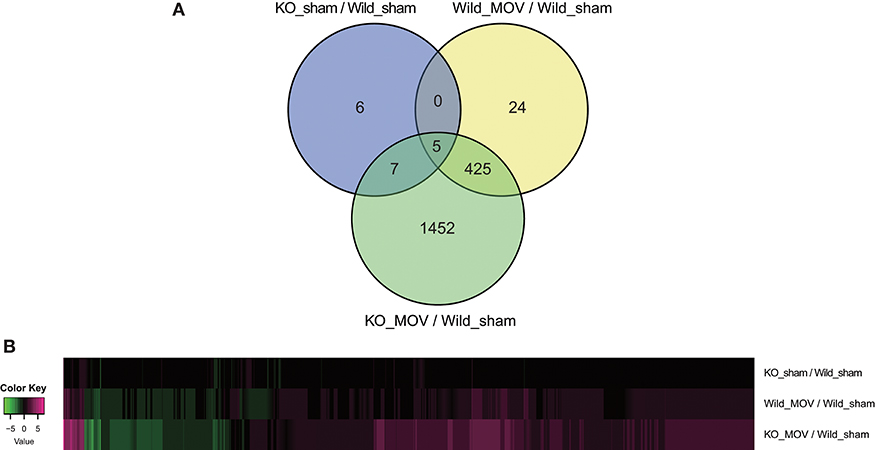 These data will be helpful in elucidating the skeletal muscle molecular networks that respond to MOV and allow in-depth analysis of expression changes in genes regulated by Vgll2 under both sedentary and MOV conditions. Interestingly, fusion genes involving Vgll2 have been identified in the spindle cell variant of rhabdomyosarcoma (Alaggio et al., 2016). Thus, our data identifying genes downstream of Vgll2 could also help reveal the molecular mechanisms underlying not only MOV but also human diseases caused by Vgll2 fusion genes.

The RNA-Seq raw data have been deposited in the DDBJ Sequence Read Archive under Accession No. DRA008472 (https://ddbj.nig.ac.jp/DRASearch/study?acc=DRP005135).

The animal study was reviewed and approved by the Animal Care and Use Committee of the National Cerebral and Cardiovascular Center in Japan.

We would like to thank Editage (www.editage.jp) for English language editing.

The Supplementary Material for this article can be found online at: https://www.frontiersin.org/articles/10.3389/fspor.2019.00041/full#supplementary-material

Copyright © 2019 Hitachi, Inagaki, Kurahashi, Okada, Tsuchida and Honda. This is an open-access article distributed under the terms of the Creative Commons Attribution License (CC BY). The use, distribution or reproduction in other forums is permitted, provided the original author(s) and the copyright owner(s) are credited and that the original publication in this journal is cited, in accordance with accepted academic practice. No use, distribution or reproduction is permitted which does not comply with these terms.