Temperature has been shown to modulate outputs of plant ETI in several plant systems. For example, the tobacco N (necrosis) gene encodes an NLR that confers resistance to tobacco mosaic virus (TMV) and a rapid HR after infection at a permissive temperature (21°) (Whitham et al., 1994). However, shifting plants to an elevated temperature (28°) prevents the development of N-mediated-HR (Samuel, 1931; Whitham et al., 1994). Similarly, the HR responses induced by the T3SEs AvrRpt2, AvrRpm1, and AvrRps4 in Arabidopsis thaliana (hereafter Arabidopsis) are inhibited at elevated temperature (28°C) (Goel et al., 2008; Freeman and Beattie, 2009; Wang et al., 2009; Cheng et al., 2013). Furthermore, constitutive expression of the NLR RPS4 results in temperature-conditioned autoimmunity that is suppressed at 28°C (Heidrich et al., 2013). Although these examples demonstrate a strong influence of temperature on the ETI-associated HR, limited information is available about how ETI-associated virulence suppression is affected by temperature.

In our studies of the ETI response activated by the T3SE HopZ1a in Arabidopsis, we have observed that at elevated temperatures (28–30°C) the HR induced by this T3SE was suppressed, however, the reduction of bacterial growth associated with this ETI response remained intact. As such, two facets of the ETI-response, HR and virulence suppression can be differentially affected, and uncoupled, by elevated temperature conditions.

Pseudomonas syringae pv. tomato DC3000 (PtoDC3000) carried empty vector (pUCP20), HopZ1a (Ma et al., 2006) or AvrRpt2 (Mudgett and Staskawicz, 1999). For macroscopic HR assays, P. syringae was resuspended to an optical density at 600 nm (OD600) of 0.1 (5 × 107 CFU/mL) and syringe-infiltrated into the right side of leaves of 5 week-old wild type Col-0 Arabidopsis. Macroscopic HR phenotypes were scored between 12 and 16 hpi. HR phenotypes were scored as “strong” (paper-like dryness and grayish in color) or “weak” (wilting but not dry and retaining green color).

For ion leakage assays, P. syringae was resuspended and diluted to a concentration of OD600 = 0.04 (2 × 107 CFU/mL), and syringe-infiltrated into four leaves per plant of 4.5–5 week-old wild type Col-0 Arabidopsis. After infiltration, four leaf disks (1.5 cm2) per plant (one disk per leaf) were harvested, washed in sterile double distilled H2O (ddH2O) for 30 min on a bench-top shaker at 250 rpm, and transferred to 6 mL of sterile ddH2O. Readings were obtained with an Orion 3 Star benchtop conductivity meter (Thermo Fisher Scientific Inc., Fort Collins, CO, USA).

We examined two T3SEs delivered by P. syringae pv. tomato (PtoDC3000), HopZ1a and AvrRpt2, which elicit ETI, and associated HR in Arabidopsis accession Col-0 (Bent et al., 1994; Mindrinos et al., 1994; Lewis et al., 2008). We examined the ability of both effectors to induce ETI-associated HR under either ambient (21–24°C) or elevated temperature conditions (30°C). Both groups of plants were grown under identical growth conditions for 3 to 5 weeks, and subject to experimental temperatures 24 h prior to infiltration (see Materials and Methods). Delivery of AvrRpt2 or HopZ1a from the virulent PtoDC3000 triggers a strong macroscopic HR between 12 and 16 h post infiltration (hpi) at ambient temperature conditions, as expected (Figure 1A). At elevated temperature, both the PtoDC3000 (AvrRpt2) and PtoDC3000 (HopZ1a)-induced HR was suppressed, with no leaves showing a strong HR between 12 and 16 hpi, and only ∼20% of leaves showing a weak HR-like collapse (see Materials and Methods; Figure 1A). 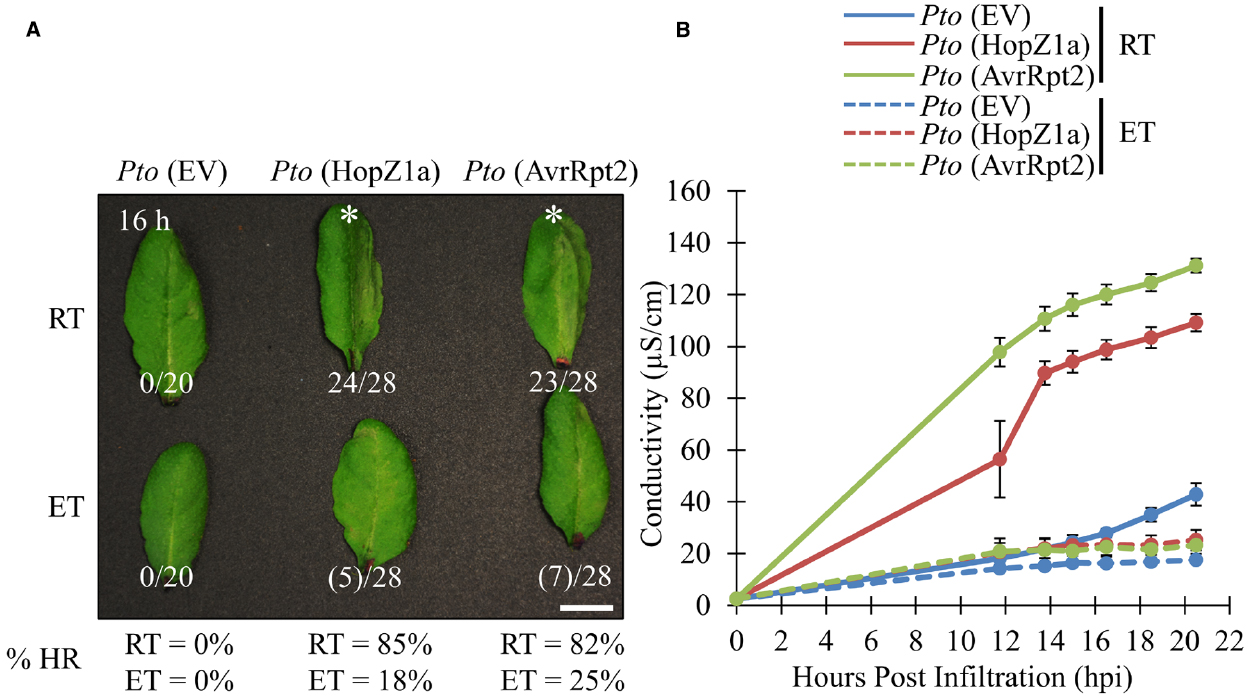 ETI-associated Virulence Suppression is not Inhibited by Elevated Temperatures 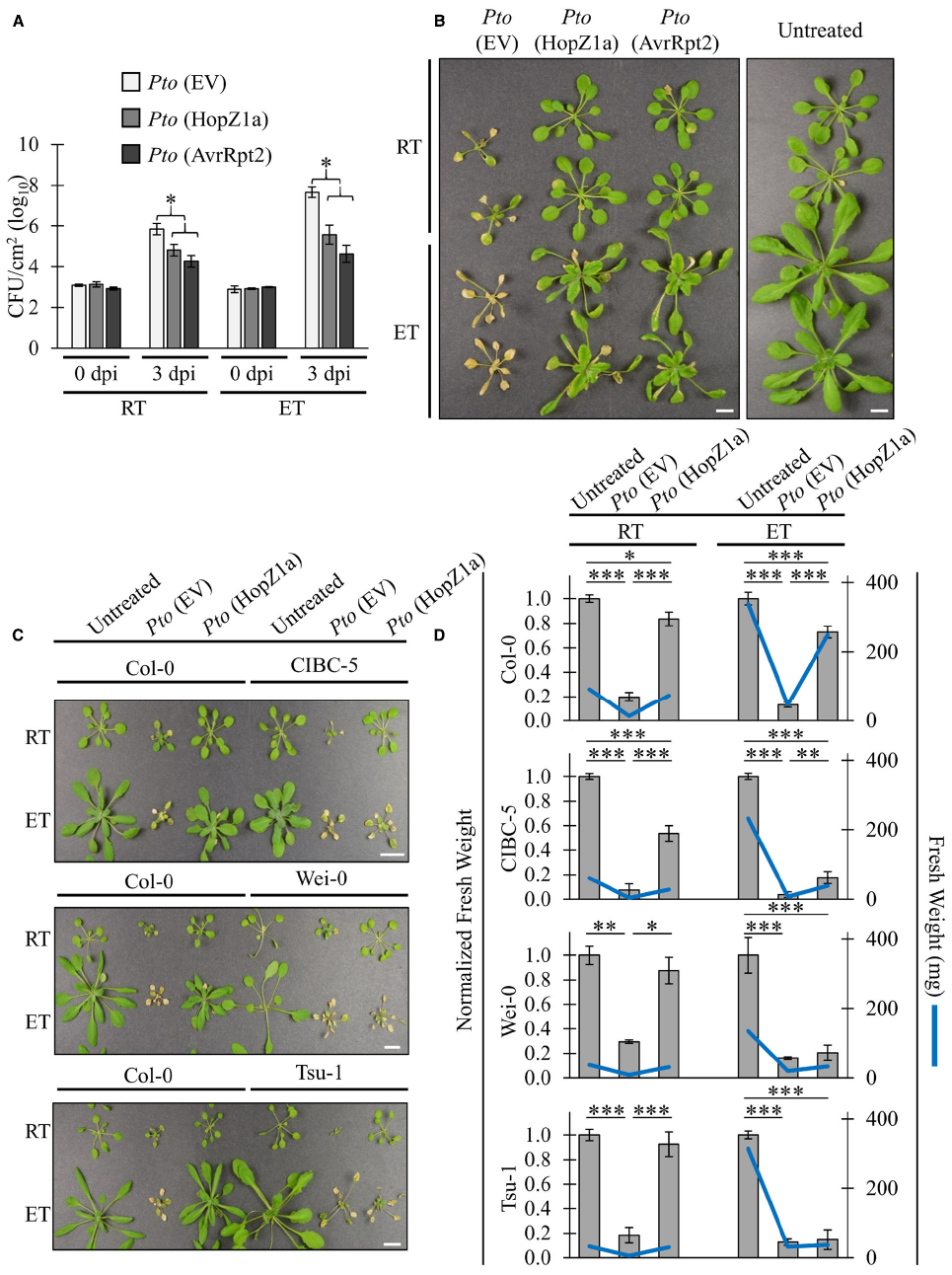 As we were conducting our spray assays we noted a noticeable size difference in resistant (green) versus susceptible (chlorotic) plants. Therefore, in order to quantify the loss of ETI-associated virulence suppression, we measured the fresh weight (both absolute and normalized) of plants at 10 days post-infection (Figure 2D). We normalized the fresh weight to assess the magnitude of differences between treatment in light of the overall increased growth associated with elevated temperatures. This normalization was done based on the weight of the untreated plant for each accession-by-temperature comparison, and was done independently for each trial. At both ambient and elevated temperature, Col-0 plants sprayed with PtoDC3000 (HopZ1a) were of a significantly higher fresh weight than plants sprayed with PtoDC3000 (EV). CIBC-5, Wei-0 and Tsu-1 plants sprayed with PtoDC3000 (HopZ1a) also had higher fresh weight relative to PtoDC3000 (EV) at ambient temperature, but this difference was reduced (CIBC-5) or lost (Wei-0 and Tsu-1) at elevated temperature (Figure 2D). Overall, these data demonstrate that the ETI response of Arabidopsis accessions is differentially affected by temperature.

Our study corroborates previous findings that temperature is a direct modulator of plant immunity. However, we find that different outputs of immunity are differentially sensitive to elevated temperature. A previous study has proposed that lower temperatures favor the activation of ETI, whereas ETI is compromised at elevated temperatures (Cheng et al., 2013). In light of our results, we would add that different facets of ETI are differentially influenced by temperature, with HR being more sensitive than ETI-associated virulence suppression. In addition, our results support the hypothesis that HR cell death is dispensable for resistance to PtoDC3000.

It is important to note that the suppressed HR at elevated temperature is not due to inhibition of the type III secretion system since P. syringae type III effector expression assays are routinely conducted at 28–30°C. Additionally, the in planta growth rate of virulent PtoDC3000 actually increased at elevated temperature, corroborating previously published data (Freeman and Beattie, 2009; Wang et al., 2009; Cheng et al., 2013).

Two different assays to monitor the ETI-associated HR yielded slightly differing results. Macroscopic HR was significantly weakened in our experiments, but not entirely inhibited (Figure 1A). On the other hand, HR-associated ion leakage was entirely inhibited for both T3SEs tested resulting in measurements similar to those of the EV control (Figure 1B). This is likely influenced by the fact that for ion leakage assays, infiltrated leaf disks are placed in water (i.e., 100% humidity) immediately post-infiltration in order to monitor changes in water conductance. As such, the ion leakage assays are conducted in both an elevated temperature and high humidity environment. We believe that the combined suppressive effects of elevated temperature and humidity result in a complete loss of HR ion leakage associated, whereas macroscopic HR is delayed but still observed since these assays are conducted at ambient relative humidity (Samuel, 1931; Jambunathan et al., 2001; Yoshioka et al., 2001; Lorrain et al., 2003; Zhou et al., 2004; Noutoshi et al., 2005; Moeder and Yoshioka, 2008; Freeman and Beattie, 2009; Mosher et al., 2010; Beattie, 2011; Hangyang et al., 2015).

Our results indicate that elevated temperatures can uncouple the HR response from ETI-associated virulence suppression. This is reminiscent of ETI examples that occur without apparent PCD. The NLRs TAO1 and RPS6 activate ETI in response to the T3SEs AvrB and HopA1 without manifestation of an HR (Shimizu et al., 2003; Gassmann, 2005; Eitas et al., 2008; Naito et al., 2008; Kim et al., 2009). The Arabidopsis NLR gene pair RPS4 and RRS1 confer resistance to PtoDC3000 expressing AvrRps4, which is accompanied by PCD in Ws-0, but not in Col-0 background (Hinsch and Staskawicz, 1996; Gassmann, 2005; Heidrich et al., 2013). These examples corroborate our observations that HR-associated PCD can be uncoupled from virulence suppression and suggest that HR-associated cell death is not required for resistance against virulent P. syringae.

NLRs can be subdivided into two main categories based on their N-terminal domains; coiled coil (CC)-NLR and Toll/interleukin-1 receptor (TIR)-NLR. HopZ1a and AvrRpt2 are recognized by the CC-NLRs ZAR1 and RPS2, respectively (Bent et al., 1994; Mindrinos et al., 1994; Lewis et al., 2010). Most examples of temperature sensitive ETI-responses are mediated by TIR-NLRs suggesting that this NLR subgroup could potentially be more sensitive to elevated temperatures (Hua, 2014). However, our preliminary experiments indicate that AvrRps4-induced virulence suppression, mediated by the TIR-NLRs RPS4 and RRS1, is retained in our elevated temperature conditions (data not shown).

In order to test the influence of local adaptation on ETI-associated virulence suppression, various Arabidopsis accessions were tested using spray assays and we identified three accessions that displayed compromised ETI at elevated temperature. CIBC-5 was isolated from Ascot, Berkshire, United Kingdom (51.4084°N, 0.6707°W), Tsu-1 from Tsushima, Japan (34.202°N, 129.29°E) and Wei-0 from Weiningen, Switzerland (47.419°N, 8.4326°E). The Col-0 accession which retained ETI-virulence suppression at elevated temperature is most similar to the Gü-0 accession, originally isolated from Gückingen, Germany (50.391°N, 8.008°E) and propagated for research use in the mid-1900s in Columbia, Missouri, USA (38.952°N, 92.334°W) (Nordborg et al., 2005). The CIBC-5 and Wei-0 accessions were isolated from locations that would experience slightly cooler average temperatures (highest monthly summer average temperature = 23°and 24°, respectively) than Gü-0 (25°), which may explain the lower tolerance of their ETI responses. However, Tsu-1 (33°) was isolated from a location that experiences much higher temperatures than any of the other accession discussed here (worldweatheronline.com). Therefore, the differences observed in the temperature tolerance of their respective ETI responses is likely influenced by additional factors. Nevertheless, the ecotypic differences observed in ETI responses at elevated temperature indicate that temperature tolerance may be an adapted trait that should be genetically tractable.

In this study, we have demonstrated that the virulence suppression and HR outputs of ETI are differentially sensitive to elevated temperature. At elevated temperatures, HR is significantly delayed or inhibited depending on the assay method used, whereas immunity, measured as bacterial growth inhibition or disease symptom development, is relatively unaffected. These observations not only emphasize the importance of carefully documented plant growth conditions in studies of plant immunity, but also highlight the differential sensitivity of various immunity outputs to abiotic stresses.

We would like to thank members of the Desveaux and Guttman labs for valuable input on the project; in particular Dr. Pauline W. Wang, Dr. Brenden Hurley, Dr. Jianfeng Zhang, Jessica Schembri, Timothy Lo, Christine Cao and Noushin Koulena for reagents, troubleshooting advice, and thoughtful discussion. This work was supported by Natural Sciences and Engineering Research Council of Canada Discovery Grants to DG and DD; a Canada Research Chair in Plant-Microbe Systems Biology (DD) or Comparative Genomics (DG); the Centre for the Analysis of Genome Evolution and Function (DD and DG).

Copyright © 2015 Menna, Nguyen, Guttman and Desveaux. This is an open-access article distributed under the terms of the Creative Commons Attribution License (CC BY). The use, distribution or reproduction in other forums is permitted, provided the original author(s) or licensor are credited and that the original publication in this journal is cited, in accordance with accepted academic practice. No use, distribution or reproduction is permitted which does not comply with these terms.