Phosphorus (P) unavailability and lack of organic matter in the soils under semiarid climates are the two major constraints for low crop productivity. Field trial was conducted to study the effects of P levels, compost application times and seed inoculation with phosphate solubilizing bacteria (PSB) on the yield and yield components of maize (Zea mays L., cv. Azam). The experiment was conducted at the Agronomy Research Farm of The University of Agriculture Peshawar-Pakistan during summer 2014. The experiment was laid out in randomized complete block design with split plot arrangement using three replications. The two PSB levels [(1) inoculated seed with PSB (+) and (2) seed not inoculated with PSB (- or control)] and three compost application times (30, 15, and 0 days before sowing) combination (six treatments) were used as main plot factor, while four P levels (25, 50, 75, and 100 kg P ha-1) used as subplot factor. The results confirmed that compost applied at sowing time and P applied at the two higher rates (75 and 100 kg P ha-1) had significantly increased yield and yield components of maize under semiarid condition. Maize seed inoculated with PSB (+) had tremendously increased yield and yield components of maize over PSB-control plots (-) under semiarid condition.

A diverse group of soil microorganisms are involved in solubilizing insoluble P complexes enabling plants to easily absorb P (Tripura et al., 2005). Many kinds of soil bacteria (Bacillus, Pseudomonas, Rhizobium, and Enterobacter) and fungi (Aspergilllus and Penicillium) have the skill to change insoluble form of P in the soil into soluble form through releasing organic acids such as formic acids, propionic acids, acetic acids, fumaeric acids, and succinic acids (Parassana et al., 2011; Walpola and Yoon, 2012). The use of beneficial microorganisms (bio-fertilizers) such as phosphate solubilizing bacteria (PSB) as inoculants with the seed increases P availability and uptake by the plants (Mousavi et al., 2004; Sharan et al., 2008; Nico et al., 2012) because the beneficial microbes produce of organic acids which reduce soil pH (Chen et al., 2006; Rodriguez et al., 2006). These acids reduce the PH and bring the dissolution of bound forms of phosphate (Walpola and Yoon, 2012). Beneficial microorganisms are important not only for the reduction of the quantity of chemical fertilizers and environment friendly (Hafeez et al., 2002) but also increased crop productivity (Afzal et al., 2005; Canbolat et al., 2006; Gyaneshwar et al., 2006; Yasmin and Bano, 2011).

Organic agriculture is important for the improvement crop growth, yield (Amanullah and Stewart, 2015; Amanullah et al., 2015), environmental conditions and human health (Kurtar and Ayan, 2004; Zengin, 2007). As deficiency of P and organic matter are some of the major limiting factors for crop production under semiarid condition. Application of compost and PSB could increase soil organic matter, P availability and crop productivity. Use of proper organic and inorganic fertilizer combination, is a key factor in crop production for sustainable agriculture under semiarid climates (Hidayatullah et al., 2013; Iqbal et al., 2015). Under semiarid climates, there is no published research on the interactive effects of compost application time and P levels with and without PSB. This research work was therefore designed with an objective to find out proper timing of compost application along with suitable P level with and without PSB for improving yield and yield components of maize under semiarid climates.

The experiment was laid out in randomized complete block design with split plot arrangement using three replications. Combination of factor-A (compost application times) and factor-B (inoculated seed with PSB and seed not inoculated with PSB) was used as main plot factor (six treatments) and factor-C (four P levels) used as subplots factor. A sub-plot size of 4 m × 3.5 m, having five rows, 4 m long and 70 cm apart were used. The required amount (2 t ha-1) of commercial compost “Higo Organic Plus” was applied at 0, 15, and 30 DBS. The chemical analysis of Higo Organic Plus was earlier reported by Amanullah et al. (2015). The required P (25, 50, 75, and 100 kg P ha-1) was applied seedbed preparation just before sowing of the crop. The PSB was obtained from the National Agricultural Research Center Islamabad was mixed with the seed (the plots with PSB) before sowing of the crop. A uniform dose of 120 kg N ha-1 as urea in two equal splits was applied half at sowing and half at knee height. The local maize cultivar “Azam” was used as test crop in the experiment. All other agronomic practices were kept uniform and normal for all the treatments.

Factors and Their Levels

Number of Grains per Ear

Number of Grain Rows per Ear

Grains weight of randomly 1000 grains was taken from seed lot of each subplot three times and weighed with the help of electronic balance and then average weight was calculated.

Harvest index for each treatment was calculated by using the following formula:

Shelling percentage for each treatment was calculated by using the following formula:

The collected data of all parameters were subjected to analysis of variance (ANOVA) and statistically analyzed according to Steel et al. (1997) for randomized complete block design with split plot arrangement and means among different treatments were compared using least significant differences (LSD) test (p ≤ 0.05). 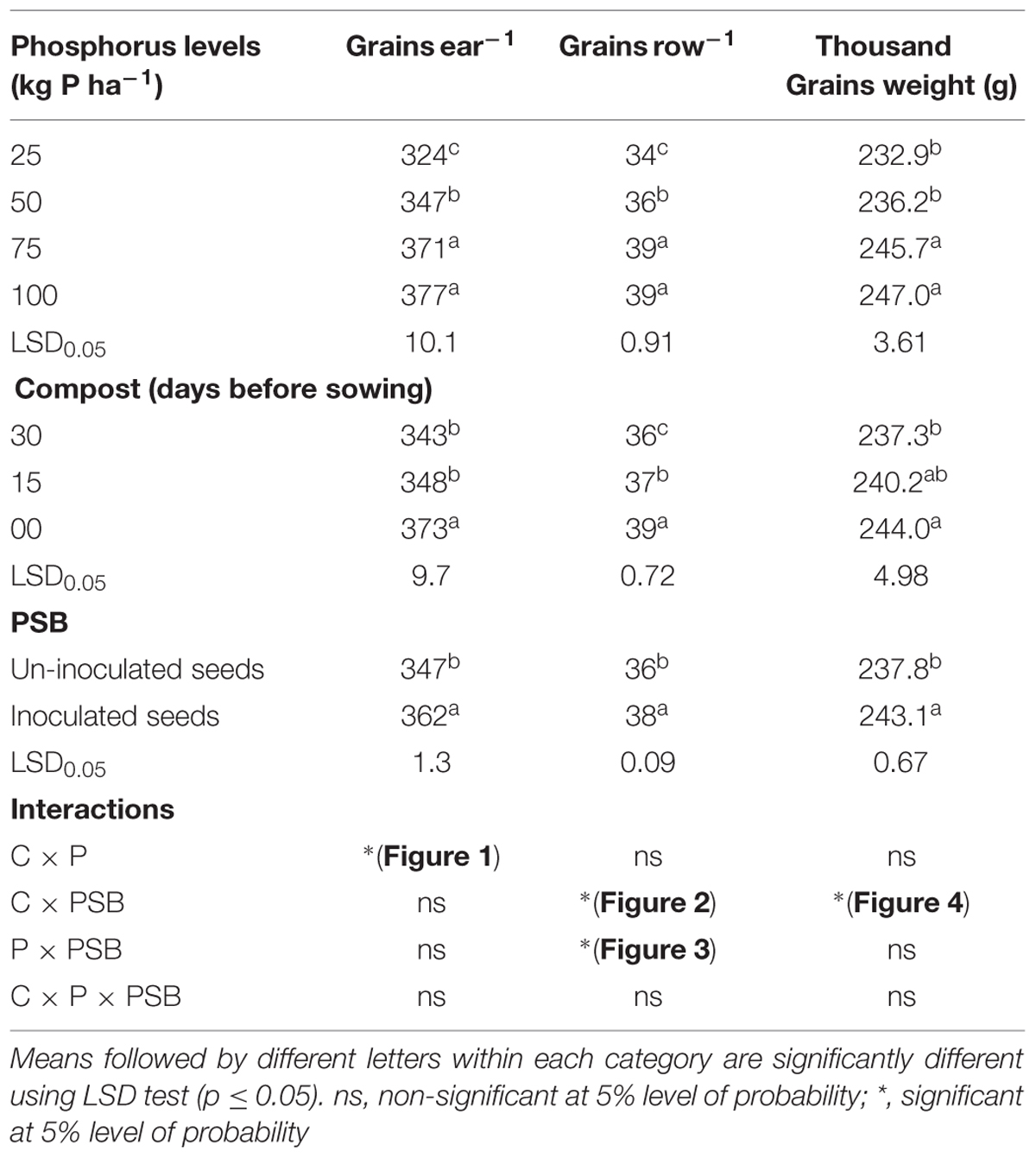 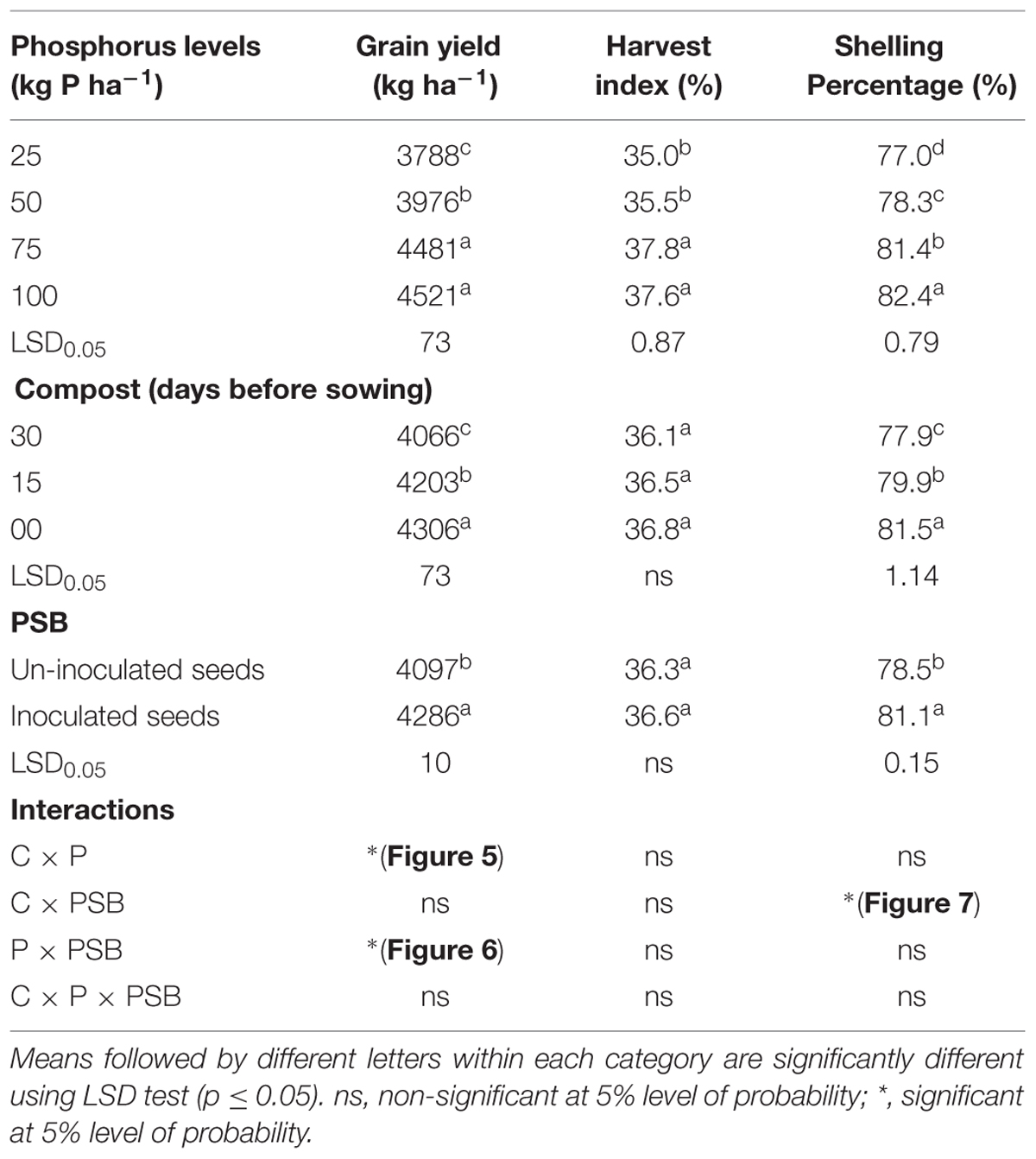 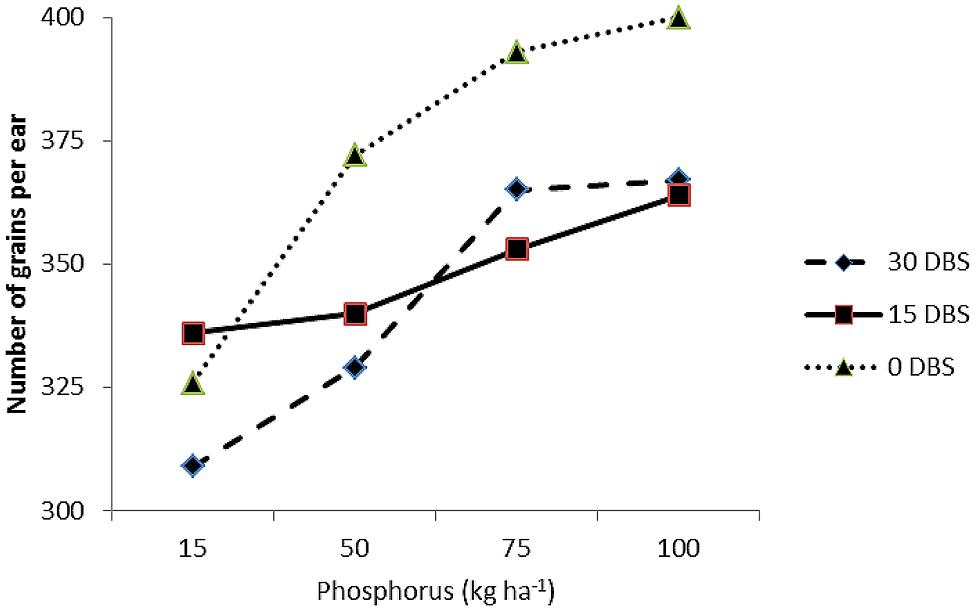 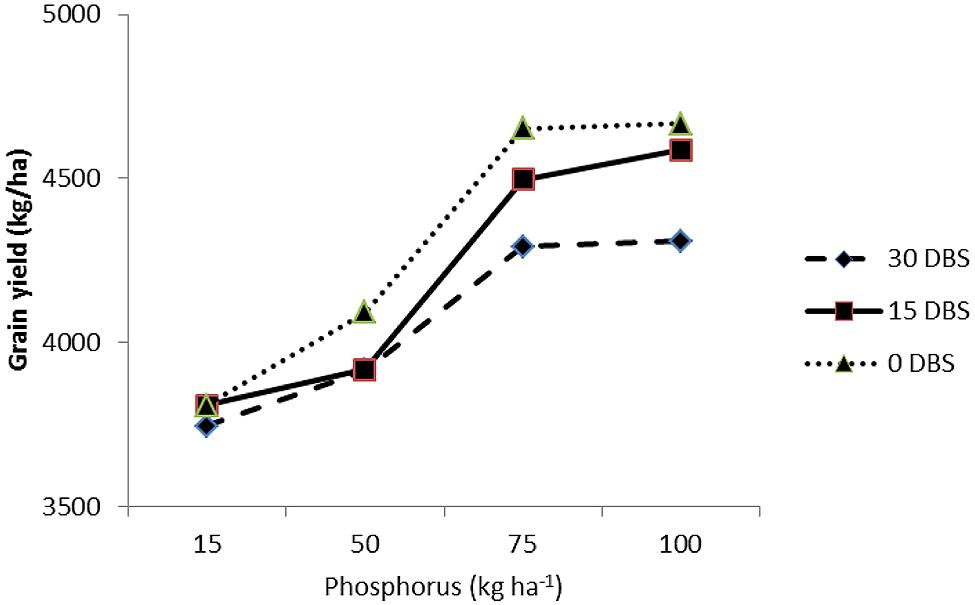 Significant differences were found in number grains ear-1 and grains row-1, 1000 grains weight, grain yield and shelling percentage between the plots treated with PSB (+) and without PSB (-) as shown in Tables 1 and 2. Plots applied with PSB (+) had produced more numbers of grains ear-1 and grains row-1, heavy 1000 grains weight, higher grain yield and shelling percentage than plots without PSB (-). However, no significant differences were observed for harvest index between the plots with PSB (+) and without PSB (-). According to Hameeda et al. (2006) and Yazdani et al. (2009), inoculation of maize seed with PSB under greenhouse and field conditions increased yield and yield components. Increase in maize yield with PSB inoculation may be due to the promotion of root growth which in turn enhancing nutrients and water uptake from the soil (Lin et al., 1983). According to Balochgharayi (2011), application of beneficial microbes (Pseudomonas) significantly increased maize yield over control. Dobbelaere et al. (2002) assessed the inoculation effect of beneficial microbes on growth of spring wheat and observed that inoculated wheat plants had better growth, more number of grains spike-1 and grain yield. 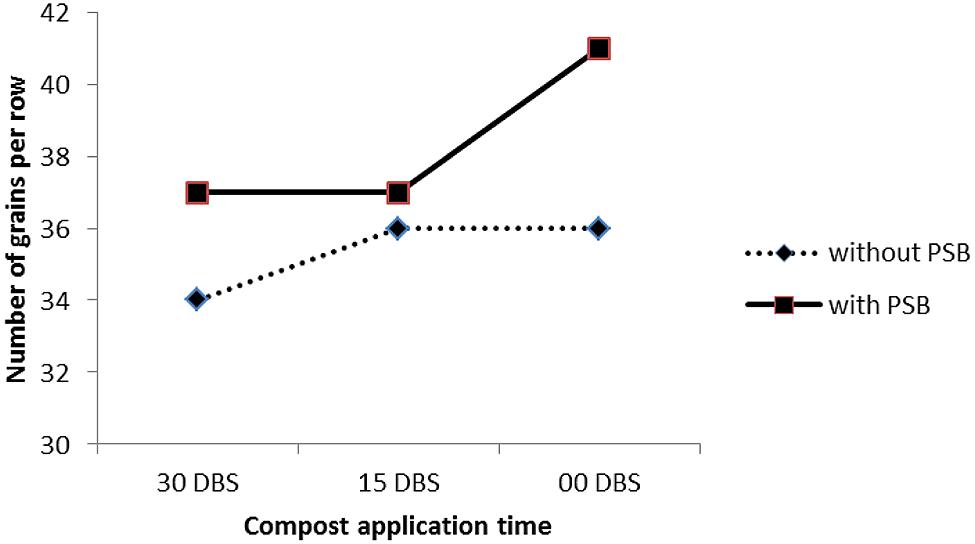 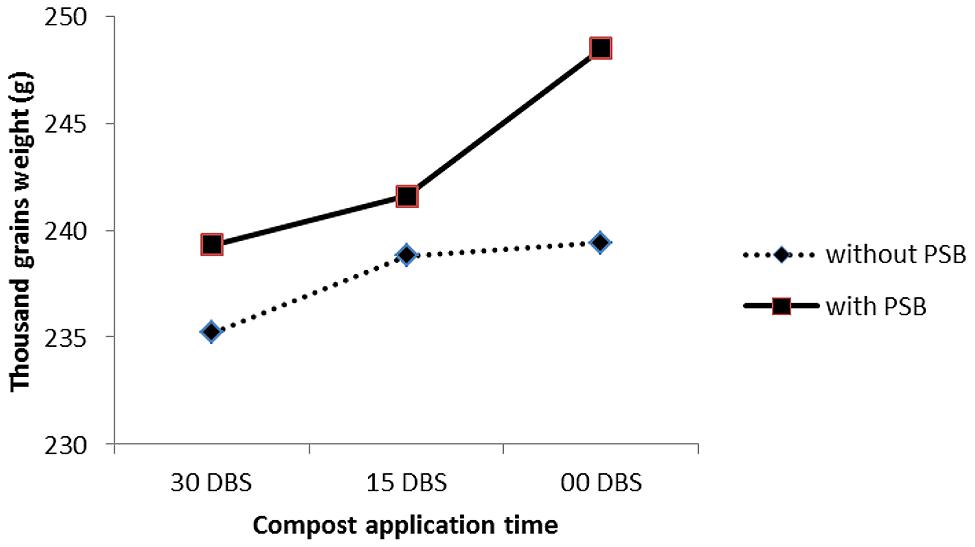 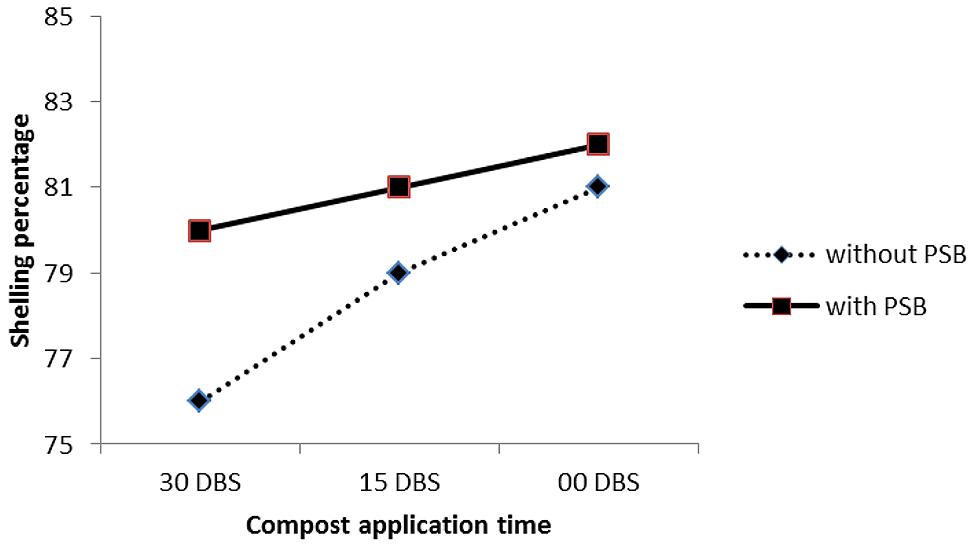 The interaction between P levels and PSB (P × PSB) had significant effect on number of grains per row (Figure 6) and grain yield (Figure 7). The P × PSB interaction indicated that the two higher P levels (75 and 100 kg P ha-1) had produced significantly more number of grains per row in maize grown under both with (+) and without PSB (-) treated plots (Figure 6). It was cleared from Figure 6 that maize seed treatment with PSB (+) had produced more number of grains row of maize than the plots without PSB (-) under semiarid climates. The P × PSB interaction indicated the increase in P level increased grain yield in maize under both PSB treated (+) and PSB untreated (-) plots (Figure 7). The two higher P levels (75 and 100 kg P ha-1) had produced significantly higher grain yield grain yield than the two lower levels of P (25 and 50 Kg P ha-1) in the plots treated with (+) and plots where PSB was not applied (Figure 7). Interestingly, the combination of 75 Kg P ha-1 + PSB treated plots ranked first in terms of highest grain yield in the study area under semiarid climate. The higher rates of P along with PSB probably may have increased the availability and uptake of P from the soil that have positive impact on yield and yield components of maize. Banik and Dey (1981) reported that combined application of rock phosphate along with inoculation Bacillus and Penicillinm species increased availability of P. Many researchers (Kumar et al., 2001; Chen et al., 2006; Adesemoye and Kloepper, 2009) suggested that seed inoculation with PSB along with application pf soluble phosphatic fertilizer decrease P fixation on calcareous thereby increase P use efficiency and yield. Chaturvedi (2006) reported taller plants, more number of tillers m-2, leaf area, weight, leaf area index, total dry matter accumulation number of grains per spike, 1000 grain-weight, seed yield and N, P, and K uptake in wheat crop with application of P along with phosphate-solubilizing bacteria (Pseudomonas striata) and farmyard manure. Kushwaha (2007) and Patil et al. (2011) suggested that interaction among rock phosphate × PSB × compost increased P availability and crop yields. 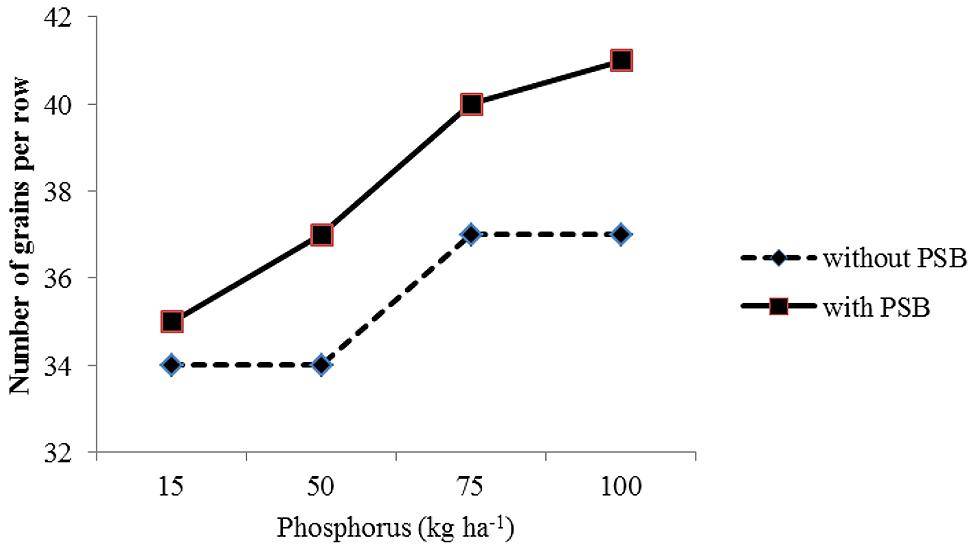 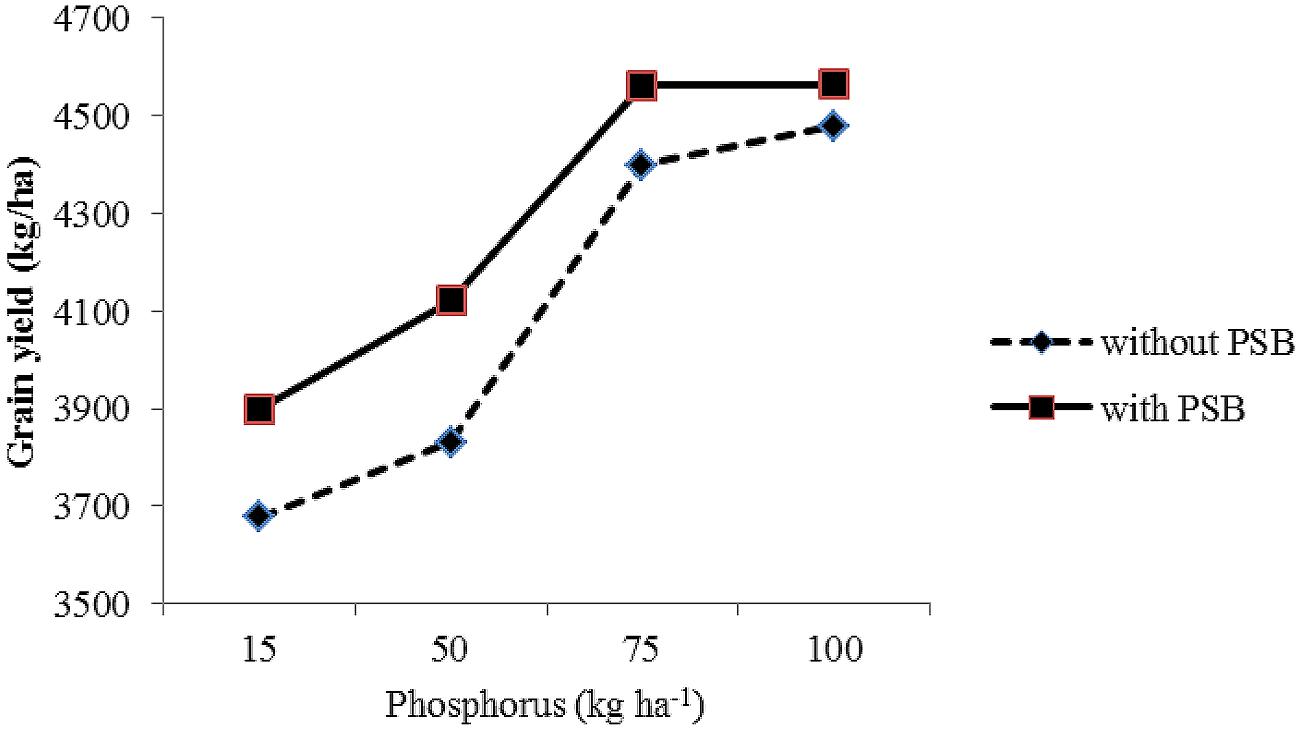 Chaturvedi, I. (2006). Effects of phosphorus levels alone or in combination with phosphate-solubilizing bacteria and farmyard manure on growth, yield and nutrient up-take of wheat (Triticum aestivum). J. Agric. Soc. Sci. 2, 96–100.

Iqbal, A., Amanullah, and Iqbal, M. (2015). Impact of potassium rates and their application time on dry matter partitioning, biomass and harvest index of maize (Zea mays) with and without cattle dung application. Emir. J. Food Agric. 27, 447–453.

Johnston, A. (2001). Phosphorus Fertilization Sources and Efficiency. A Regional Newsletter. Georgia: Potash and Phosphate Institute (PPI) and the potash and phosphate institute of Canada (PPIC).

Lasaridi, K. E., and Stentiford, E. I. (1999). “Composting of source separated MSW: an approach to respirometric techniques and biodegradation kinetics ,” in Proceedings of the International Symposium on “Composting of Organic Matter.” 31-September, 1999, Kassandra-Chalkidiki.

Sobulo, R. A., and Babalola, O. (1992). “Improved organic fertilizer and soil condition,” in Toward Efficiency Fertilizer Use in Nigeria. Lagos: Federal Ministry of Agriculture, Water Resources and Rural Development, 90–110.

Copyright © 2015 Amanullah and Khan. This is an open-access article distributed under the terms of the Creative Commons Attribution License (CC BY). The use, distribution or reproduction in other forums is permitted, provided the original author(s) or licensor are credited and that the original publication in this journal is cited, in accordance with accepted academic practice. No use, distribution or reproduction is permitted which does not comply with these terms.