Institute of Informatics and Telematics, Department of Engineering, ICT and Technology for Energy and Transport, National Research Council (CNR), Italy

Evolution is a process that results in change in the frequency of alleles within a gene pool, across generations. It enables species to cope up with various environmental conditions, both abiotic and biotic (Helena and Sue Barnes, 1989). These phenotypic variations are the result of genome evolution which takes place through various processes such as mutations, transfer of genes and genomes between species, amplification and mobility of DNA, and amplification and homogenization of tandemly repeated DNA sequences. These processes also lead to the subtle modifications in the pre-existing genes that lead to the evolution of new genes with novel functions, which further results in lineage-or species-specific phenotypic traits in an organism (Kaessmann, 2010). Several mechanisms have been theorized to explain appearance of new genes with novel functions in various organisms. These mechanisms involve duplication, lateral transfer, horizontal transfer, fusion and fission, and de novo genesis of genes whereas other mechanisms such as non-disjunction, tandem duplication, retropositions, and transpositions assist the gene duplication events (Ohno, 1970; Jiang et al., 2004; Morgante et al., 2005). In addition, gene duplication events also occur through rearrangements and subsequent repair of staggered breaks (Ranz et al., 2007). Genes which come from the unrelated genomes are considered as probable case of lateral gene transfer. This is the most common mechanism for gene induction in prokaryotes, and has also been reported in genomes of cellular organelles such as mitochondria, chloroplasts, and nucleus in eukaryotes (Roger, 1999). The evolution in eukaryotes has been hypothesized as an outcome of the massive influx of the bacterial genes through primary and secondary endo-symbiosis and horizontal transfer of genes. The well-known evidence of such phenomenon is the existence of mitochondria and chloroplasts in plants (Timmis et al., 2004; Embley and Martin, 2006). It has been observed that non-coding regions of DNA also add new genes to the genome, a process termed as de novo genesis. The evolution process in the eukaryotes also occurs via loss of genes and appearance of new genes leading to the evolution of new proteins (Koonin et al., 2004; Miller and Ball, 2008).

A eukaryotic genome is comprised of heterogeneous set of genes, which apart from differing in terms of function, also have distinct evolutionary histories (Vishnoi et al., 2010). These varied evolutionary history of various genes, allow the identification of the orthologs across diverse range of species spanning vast evolutionary distances. Thus, these genes can be categorized as the “old,” depending upon the identification of their respective orthologs in wide range of species (Wolf et al., 2009; Vishnoi et al., 2010). The genes with no visible orthologs, which might have evolved due to duplication and further got drifted from the ancestral copy due to accelerated substitutions or any other evolutionary event, may be categorized as “new” genes (Ohno, 1970; Long, 2001; Lynch and Katju, 2004; Toll-Riera et al., 2009). The classified new proteins in an organism could be the result of refashioned old genes duplicated during the evolutionary process (Ohno, 1970). As proteins often evolve within the constraints of their conserved function (Ingram, 1961) and considering that the protein sequences preserve the information throughout the evolutionary process, protein sequence comparison can be considered as a powerful tool for understanding genome evolution. For example, as earlier reported, CBS (Cystathionine β-synthase) domain containing protein (CDCP) encoding genes have been hypothesized to have evolved and assumed diverse functions in plants (Kushwaha et al., 2009).

The genome sequence for Oryza sativa was obtained from Oryza sativa genome annotation project (http://rice.plantbiology.msu.edu/; Ouyang et al., 2007). All the analyses in Oryza sativa were performed on version 7.0 of the Oryza sativa genome annotation data. The genome sequence for Arabidopsis was obtained from the Arabidopsis information source TAIR (http://www.arabidopsis.org; Lamesch et al., 2012). All the analyses were performed on TAIR10 version of the resource. The prokaryotic proteins were obtained from COGs database (Phylogenetic classification of proteins encoded in complete genomes; http://www.ncbi.nlm.nih.gov/COG/) at NCBI as a complete unicellular cluster. Further, to validate the results, the orthologs were also searched using 2766 bacterial species (ftp://ftp.ncbi.nlm.nih.gov/genomes/refseq/bacteria/) available at NCBI database.

Identification of the Old “Prokaryotic” Proteins

The analyses were performed using the protein sequences obtained from the Arabidopsis and Oryza sativa genome database. In order to classify proteins as old and new, we first identified protein homologs in 2766 bacterial species using reciprocal BLASTP searches (E-value threshold 1 × 10−6; Tatusov et al., 1997). Proteins with an ortholog in bacteria (ftp://ftp.ncbi.nlm.nih.gov/genomes/refseq/bacteria/) were considered as old while the proteins without orthologs were considered new. These orthologs have been named as the old “prokaryotic” proteins in Arabidopsis and Oryza sativa. This approach has been earlier used to classify the genes as old or young (Wolf et al., 2009; Vishnoi et al., 2010). Further, in order to validate the results, we performed the BLASTP homolog search of the Arabidopsis and Oryza sativa protein sequences with the prokaryotic proteins obtained from COGs database.

In order to identify domains, families, motifs, and repeats in the protein sequences identified as “old” prokaryotic proteins in both Arabidopsis and Oryza sativa using BLASTP searches, Pfam database was scanned using PfamScan program (Bateman et al., 2004). The Pfam predictions were performed locally, in order to predict the domains. For this purpose, the NCBI-BLAST (Altschul et al., 1997), HMMER (Eddy, 1998), and PfamScan (Bateman et al., 2004) programs were installed locally. The program PfamScan, systematically executes BLAST and HMMER programs to search the domain profiles from Pfam database. The entire domain profile was predicted by using the default parameters. The output of the PfamScan program was further parsed and domain architecture of various proteins was constructed using the PERL programming language. The common domains, families, motifs and repeats present in Arabidopsis and Oryza sativa were identified using the PfamScan results.

The cumulative density function (cdf) plot of the Pfam-predicted domains was prepared using MATLAB 2011a software. The two-sample Kolmogorov-Smirnov test was applied in order to compare the distribution of the domain architecture pattern of proteins in both Arabidopsis and Oryza sativa.

Figure 2. The plot shows the percentage of proteins having one or more than one domain in the old prokaryotic proteins (red) and in new proteins (blue) in Arabidopsis (A) and Oryza sativa (B). 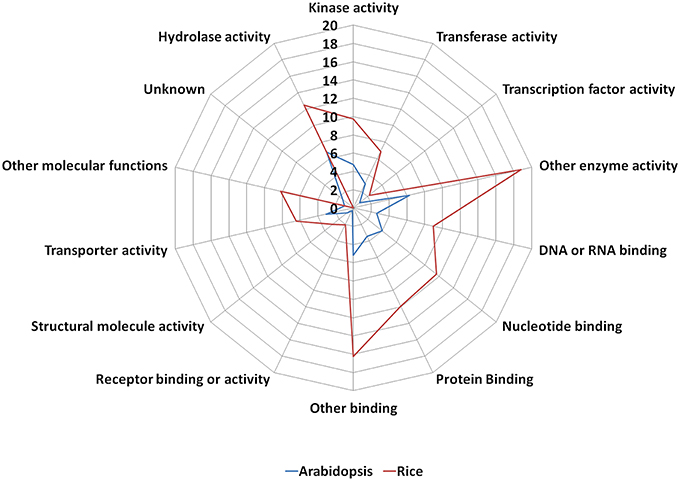 Analysis of Family and Domains in Old “Prokaryotic” Proteins

One of the biggest opportunities in the post-genome sequencing era is to dig deep into the genomes, in order to gain insights about the possible role of proteins in various complex processes. Among the monocots, Oryza sativa is the model plant for analyzing various agronomic traits while in dicots, Arabidopsis is the model crop plants due to its notable characteristics. Earlier reports have given interesting comparative overviews of the number of protein candidates of TCS (Pareek et al., 2006), CDCP (Kushwaha et al., 2009), Gly (Mustafiz et al., 2011), Histone chaperones (Tripathi et al., 2015), and NCX (Singh A. K. et al., 2015) family present in the two genera (Arabidopsis and Oryza sativa) which gives insights into the possible modes of their genome evolution. One of the major questions, which still remains to be answered, is how the evolution of these proteins, per-se, has taken place in the two genomes. The present study has been undertaken to look into these genomes to find the probable answer to this question.

Old “prokaryotic” genes containing ancestral components such as functional and/or structural domains of proteins form a significant fraction of plant genomes. Earlier, it was hypothesized that the endo-symbiotic evolution led to the acquisition of numerous genes from the endo-symbiotic organelles, which later evolved into chloroplast and mitochondria (Martin and Herrmann, 1998; Kurland and Andersson, 2000; Martin et al., 2002). A large number of endo-symbiotic genes were displaced later to the host's nucleus. These genes produce several precursor proteins which are imported into the chloroplast (Martin and Herrmann, 1998; May and Soll, 1999; Cline and Dabney-Smith, 2008; Jarvis, 2008). Similar analysis in Arabidopsis and Oryza sativa has also been strengthened by the fact that the plastid DNA has been found in abundance in the genomes of Arabidopsis and Oryza sativa (Shahmuradov et al., 2003; Alexeyenko et al., 2006). Our results from the genome-wide identifications of the old “prokaryotic” proteins has confirmed that large number of “prokaryotic” protein encoding genes have not only remained confined to the chloroplast, but also might have got incorporated into the nuclear genomes of both Arabidopsis and Oryza sativa. Our analysis has shown that, chromosomes XI and XII in Oryza sativa, have fewer old “prokaryotic” proteins as compared to other chromosomes. Previous reports have suggested large number of duplications on these chromosomes. These duplications are known to be coupled with the high density of disease resistance gene clusters (Rice Chromosomes 11 12 Sequencing Consortia, 2005). The prominence of new genes in these chromosomes might be due to presence of fast evolving genes. It has been shown earlier that the fast-evolving genes might be misclassified as new due to the inverse relationship between the evolutionary rate and age of the gene (Elhaik et al., 2006). Also, higher number of old “prokaryotic” proteins in Arabidopsis than in Oryza sativa indicate toward greater number of fast evolving genes in Oryza sativa than in Arabidopsis.

Domains are considered as the structural, functional and evolutionary unit of proteins which are known to fold independently into the stable core (Jaenicke, 1987). Domain combination and recombination leads to the formation of new proteins and their functions (Yang and Bourne, 2009). Domain based architecture is essentially considered to be conserved in plants, irrespective of the size of the genome which holds true for all types of protein domain architecture (Zhang et al., 2012). Our results from the analysis confirm that the protein domain architecture remains conserved in both Arabidopsis and Oryza sativa (in both old and new proteins) though there are differences in the number of proteins between the two species. Further, old “prokaryotic” proteins were found to be sharing a large number of domains and families in the two genomes.

HK, AP, and SP conceived the idea and designed the experiments. AS and MJ performed the analysis. HK wrote the manuscript. SP and AP edited the manuscript. All the authors approved the final manuscript.

The Supplementary Material for this article can be found online at: https://www.frontiersin.org/article/10.3389/fpls.2016.00304

Supplementary Table 2. Common domain arrangement identified in old “prokaryotic” proteins in Arabidopsis and Oryza sativa along with their respective functions in the two genomes.

Elhaik, E., Sabath, N., and Graur, D. (2006). The “inverse relationship between evolutionary rate and age of mammalian genes” is an artifact of increased genetic distance with rate of evolution and time of divergence. Mol. Biol. Evol. 23, 1–3. doi: 10.1093/molbev/msj006

Copyright © 2016 Singh, Jethva, Singla-Pareek, Pareek and Kushwaha. This is an open-access article distributed under the terms of the Creative Commons Attribution License (CC BY). The use, distribution or reproduction in other forums is permitted, provided the original author(s) or licensor are credited and that the original publication in this journal is cited, in accordance with accepted academic practice. No use, distribution or reproduction is permitted which does not comply with these terms.