Ranunculus L. is an early diverging clade in the Angiosperm phylogeny. The split between terrestrial and aquatic/semi-aquatic lineages within the genus occurred within 20 Ma (Emadzade and Horandl, 2011), which is much younger than for some well-known aquatic lineages such as Ceratophyllum and Potamogeton. Ranunculus sceleratus Linn. is a semi-aquatic plant commonly found in paddy fields, streams and lakes in Asia, Europe and North America (eFlora of China, http://www.efloras.org/). The plant has also been studied for its unique toxicological and pharmacological properties (Prieto et al., 2003). Its karyotype is 2n = 32, x = 8 in mainland China (Yang, 2000). It usually roots in inundated soils, with stems and leaves emergent. The semi-aquatic R. sceleratus has been hypothesized to be an inter-mediate type in the transition from a terrestrial to aquatic habitat within the genus (Barrett et al., 1993; Prieto et al., 2003).

RNA-seq data of R. sceleratus was deposited at NCBI sequence Reads Archive (no. SRP072329). It is in SRA format. ITS sequence of R. sceleratus was deposited in GenBank (no. KT957621). All the unigenes of R. sceleratus, data matrices of ITS and chloroplast DNA, sequences of the 3455 putative orthologous clusters identified using the program OrthoMCL, and 884 clusters after filters were deposited in figshare (https://figshare.com/s/f40d8f9bd8f894f2d630; sequences in fasta format). These data can be used for further transcriptome assembly, selective pressure estimation, phylogenetic analyses, etc.

Nuclear ITS and Chloroplast DNA Sequences

(1) The internal transcribed spacer regions (ITS1, ITS2) and 5.8S ribosomal RNA gene for R. sceleratus was generated with the methodology in Chen et al. (2015); ITS for R. bungei, R. cantoniensis, and R. brotherusii were accessed from GenBank (nos. KP336399, KP336398, KP336400). Close relative of Ranunculus, viz. Laccopetalum giganteum and Krapfia clypeata (GenBank nos. GU552271, GU552272), were used as outgroups following Emadzade and Horandl (2011). (2) cpDNA sequences for the four Ranunculus species were extracted from non- redundant unigenes of the four species; the chloroplast genome of Clematis terniflora was accessed (GenBank no. NC_028000). C. terniflora was used as an outgroup as it is the closest relative of Ranunculus with a complete chloroplast genome available in GenBank. The DNA alignment was conducted using Mauve v. 20150226 (Darling et al., 2004). Conserved sequences for the five species were concatenated and yielded a matrix with 29,654 bp length for each species. Maximum likelihood (ML) analyses were conducted for ITS and cpDNA datasets separately using RAxML v. 8.1.20 (Stamatakis, 2006) with the GTRGAMMA model and fast bootstrap (1000 replicates) analyses. Phylogenetic relationships of the four Ranunculus species recovered from ITS and cpDNA are congruent with each other. ITS phylogeny: [(L. giganteum, K. clypeata), (R. cantoniensis, (R. brotherusii, (R. bungei, R. sceleratus)71)100)85); cpDNA phylogeny: (C. terniflora, (R. cantoniensis, (R. brotherusii, (R. bungei, R. sceleratus)100)100)].

Step by step strategies were adopted to find orthologs and exclude possible paralogs:

(1) Orthologous clusters among R. bungei, R. sceleratus, R. cantoniensis, R. brotherusii, and Vitis vinifera were identified using OrthoMCL (Li et al., 2003) with default settings according to Wissler et al. (2011). More species may increase efficiency in computational screening for orthologs. Protein sequences of V. vinifera, which show high similarity to Ranunculus species, were downloaded from Genoscope (http://www.genoscope.cns.fr/spip/). Clusters with ≥1 sequence per species were used. If >1 sequence of any species was included in a cluster, only the sequence showing the highest similarity to sequences of other species was kept. (2) After removing the sequences of V. vinifera, orthologous clusters were aligned by MUSCLE (Edgar, 2004) with default parameters. Clusters with alignment length < 200 bps and including unexpected stop codons were discarded. (3) Saturation tests were performed to remove orthologs saturated at synonymous sites. The third codon positions of each ortholog were extracted, then used to estimate branch lengths of the gene tree with the general time reversible model in the PAML package v. 4.8 (Yang, 2007). The cluster was discarded from further analyses if branch length of one or more branches was < 1.

(4) ML analyses were also conducted for all the clusters from the last step using the same methods as for the nuclear ITS and chloroplast DNA sequence data sets, but without the outgroup setting. The clusters, which had different species relationships than the ITS and cpDNA trees, were excluded from further analyses. This method is able to exclude the possible paralogs (Zeng et al., 2014). (5) A local blast database was constructed using protein sequences accessed from NCBI (Aug. 2015) with the software package NCBI BLAST+ v. 2.2.31. Protein sequences of 19 species, which showed high similarity to sequences of Ranunculus in our preliminary analyses, were incorporated, viz. Amborella trichopoda, Arabidopsis thaliana, Brassica napus, Camelina sativa, Citrus sinensis, Cucumis sativus, Elaeis guineensis, Fragaria vesca, Glycine max, Gossypium raimondii, Malus domestica, Medicago truncatula, Nelumbo nucifera, Populus trichocarpa, Prunus mume, Ricinus communis, Sesamum indicum, V. vinifera, and Zea mays. In total, 752,004 sequences were incorporated. All the orthologs from the last step were annotated to the local database using BLASTX with E = 10−3 and default settings. If any of the four orthologs within a cluster were matched to different sequences, the cluster was excluded from further analyses using perl scripts. (6) The aligned clusters were inspected by eye in BioEdit v. 7.2.5 (Hall, 1999). Alignment problems at either end of sequences were deleted, and clusters with problems in the middle were excluded. 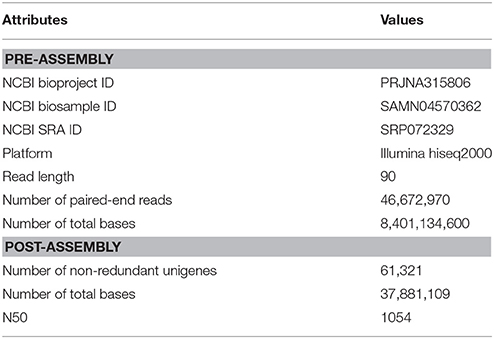 SZ and QW conceived this study; SZ and LC carried out experimental works and with MM drafted the manuscript; SZ, LC, YW and ZH performed data analyses. All authors gave approval of this manuscript to be published.

This research was supported by grants from the National Natural Science Foundation of China (no. 31500192), the Chinese Academy of Sciences (no. XDAO5090305), and the Special Foundation for State Basic Working Program of China (no. 2013FY112300).

The reviewer AC and handling Editor AM declared their shared affiliation, and the handling Editor states that the process nevertheless met the standards of a fair and objective review.

We thank Wei Li for discussion on this study; Kuo Liao for assistance in plant collection.

Copyright © 2016 Zhao, Chen, Wei, Wang and Moody. This is an open-access article distributed under the terms of the Creative Commons Attribution License (CC BY). The use, distribution or reproduction in other forums is permitted, provided the original author(s) or licensor are credited and that the original publication in this journal is cited, in accordance with accepted academic practice. No use, distribution or reproduction is permitted which does not comply with these terms.