Drought is a serious problem in semi-arid and arid areas worldwide (Mardeh et al., 2006). It can cause losses in wheat grain yield of between 10 and 100% Foulkes et al., 2007; Li et al., 2011; FAO, 2013. Furthermore, climate change is likely to increase drought risk in the Twenty-first century in many parts of the world (Arnell, 2008). Hence, it is important to develop wheat cultivars with high drought tolerance in order to improve food security.

An F6 plant, derived from the cross Gaocheng 9411 (glaucous)/ATHLET (non-glaucous) and designated G-JM200, segregating in leaf bloom characteristics, was identified and confirmed by F6:7 families. Four wheat NILs, i.e., G-JM205, G-JM208, NG-JM204, and NG-JM206, were developed from the progenies of the above F6 plant and used in the current study.

Each year from 2013 to 2015, around October 10, the above-mentioned wheat NILs were sown in a randomized block experiment of three replicates with two treatments, i.e., water-irrigated (WI) and drought-stressed (DS), at the Experimental Station of Shandong Academy of Agricultural Sciences (SAAS), Jinan, Shandong Province, China. The soil contained 12.8 g·kg−1 of organic matter, 1.08 g·kg−1 of total nitrogen, 90.2 mg·kg−1 of alkali-nitrogen, 25.0 mg·kg−1 of rapidly-available phosphorus and 158.0 mg·kg−1 of rapidly-available potassium. The station was in a temperate continental monsoon climate, characterized by dry, cold winters and rainy, hot summers. Weather data over 2 years in 2013–2015 were recorded at a meteorological station located at the experimental site (Supplementary Table 1). During wheat growing season, total precipitation was 234.4 mm in 2013–2014 and 264.7 mm in 2014–2015. Averaged temperatures in 2013–2014 and 2014–2015 growing season were 11.7 and 11.5°C, respectively, as compared to the 30-year average of 11.2°C. Each plot measured 12 m2. Soil fertility was high and weeds and diseases were controlled. Under WI conditions, the wheat NILs were irrigated both at jointing and after anthesis. For the DS condition, the wheat NILs were only irrigated at jointing.

The method for cuticular wax isolation was performed as described previously by Koch et al. (2006), with minor modifications. To study the effect of drought on cuticular wax accumulation, five flag leaves were collected for four wheat NILs from the 2013–2014 field plots. The flag leaves were weighed immediately after sampling (fresh weight). Wax was extracted by dipping the flag leaf blades in 30 ml CHCl3 for 30 s. The wax extract was filtered using filter paper and air-dried in a desiccator at room temperature until there was no change in weight. Subsequently, the flag leaves were oven-dried for 24 h at 70°C as described by Clarke (1987). Yield of cuticular wax and dry weight (DW) of flag leaves DW were determined on an analytical balance with an accuracy of 0.01 mg (Sartorius Quintix1102-1CN, Germany). Cuticular wax content (CWC) was calculated using the following formula: CWC (mg/g) = Extracted wax weight/DW.

Scanning Electron Microscope (SEM) imaging of cuticle surfaces was performed as previously described by Zhang et al. (2013). The detailed procedures were as followed: (1) A 0.5 cm tissue fragment was harvested from the flag leaf, the uppermost part of the flag leaf were collected from wheat spikes at anthesis at Fakes' stage 10.5.1; (2) The tissue samples were vacuum drying; (3) The pretreated samples were sputtered with gold powder using the CrC-150 Sputtering System, and inspected and captured with an SEM (SJM-6610LV, Japan).

In 2014, Ψflagleaf was measured as described by Nar et al. (2009) using a thermocouple psychrometer (Wescor PSYPRO, Logan, UT, USA). The detailed procedures were as followed: (1) Discs about 6 mm in diameter were cut from the fully expanded flag leaves at Fakes' stage 10.5.1; (2) Samples were equilibrated for 120 min before the readings were recorded by a Wescor PSYPRO water potential datalogger in the psychrometric mode; (3) Measurements were done three times from 5 leaves at the same age.

For ELWL, in order to minimize water loss due to transpiration, the excised leaves were placed in a polythene bag and then immediately transported to the laboratory. Flag leaves were excised from plants at stage 10.5.1, dehydrated for 8 h at room temperature in a dark container with a relative humidity of 40%, and weighed every 2 h using an analytical balance with an accuracy of 0.001 mg (Sartorius BSA223S, Germany). Flag leaves were then oven-dried for 24 h at 70°C as described by Clarke (1987). ELWL was calculated based on the formula: ELWL (%) = [(FW-Wt)/(FW-DW)] × 100, where Wt was the weight of flag leaf after dehydration; t = 2, 4, 6, and 8 h, respectively. FW was the fresh weight of flag leaves. DW was the DW of flag leaves.

For relative RWC, the samples were handled as described by Dhanda and Sethi (1998), with minor modifications. The detailed procedures were as followed: (1) The samples were weighted immediately as fresh weight (FW), then sliced into 2 cm sections and floated on distilled water for 5 h; (2) The turgid leaf sections were then rapidly blotted to remove surface water and weighted to obtain turgid weight (TW); (3) The leaf discs were dried in the oven at 70°C for 24 h and then DW were obtained; (4) The relative RWC was calculated based on the formula: Relative RWC (%) = RW DS/RW WI × 100, where FW was the fresh weight of flag leaves, TW was the TW of leaf sections, and DW was the DW of flag leaf sections.

In 2014, at the wheat flowering stage, measurements of flag leaf photosynthesis rate (Pn, μmol·m−2·s−1), transpiration rate (E, mmol·m−2·s−1), stomatal conductance (Gs, mmol·m−2·s−1), and intercellular CO2 concentration (Ci, μmol·m−2·s−1) were performed as previously described by Fischer et al. (1998), with minor modifications, using a portable infrared gas analyzer (CIRAS-2 PP Systems, England) at two positions in each plot. For each measurement, which took about 30 s, the flag leaf was exposed to full sunlight, with the cuvette positioned normal to the sun to give a light intensity of 1800–2000 μmol·m−2·s−1 and three leaves were placed across the cuvette with abaxial surface of the leaves uppermost.

Also in 2014, at the flowering stage, six dark-adapted leaves were used to measure PS II activity in each plot in the dark under WI and DS conditions, respectively. The maximum PS II photochemical efficiency (Fv/Fm, F′v/F′m), the efficiency of electron moves beyond QA (ψo, ψ′o), performance index (PIABS, PI′ABS), and the density of QA-reducing PS II reaction centers per cross-section (ABS/RC, ABS′/RC′) were measured using a Plant Efficiency Analyzer (PEA; Hansatech, England); measurements were carried out according to the methods described by Strasser et al. (2010).

Total DW was measured by harvesting 12 m2 of the central part of each plot at crop maturity in 2014 and 2015. Drought tolerance indices were calculated using the following relationships:

All data was analyzed using SAS software version 9.0. A comparison was made between the mean values of wheat NILs. Duncan's multiple range test was used to test for significant differences. Statistical significance was determined at the 5% (P = 0.05) level. 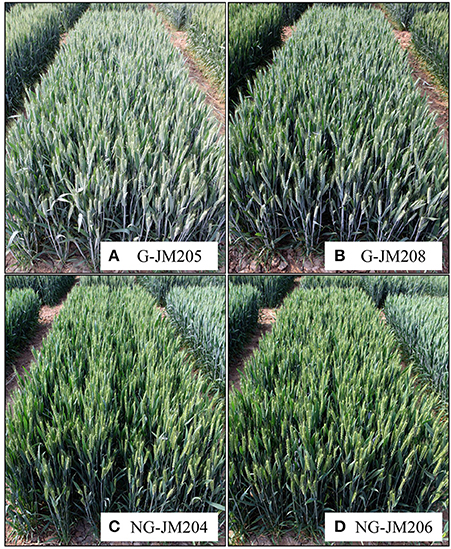 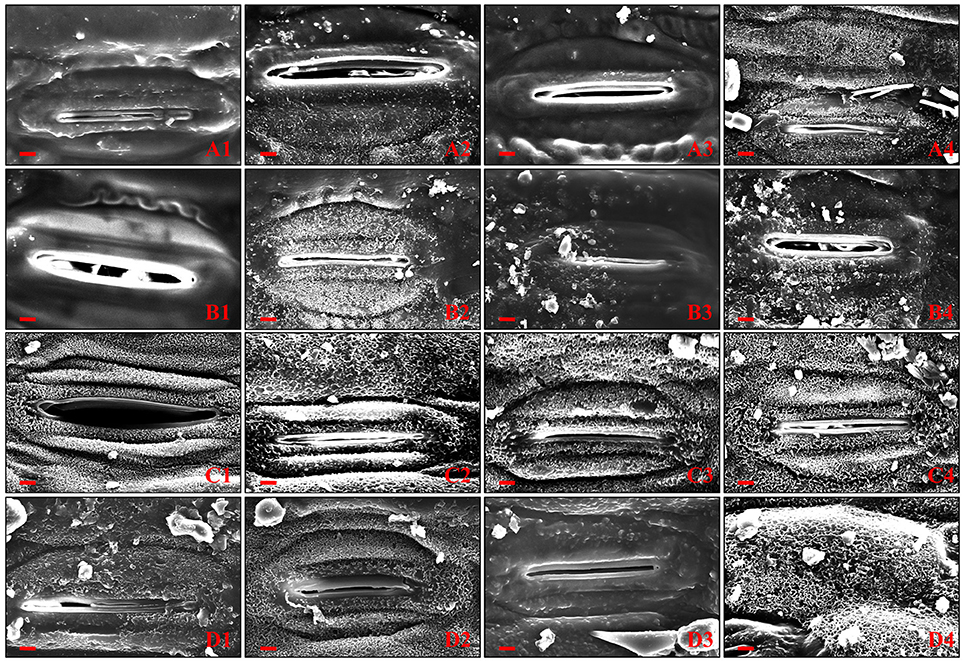 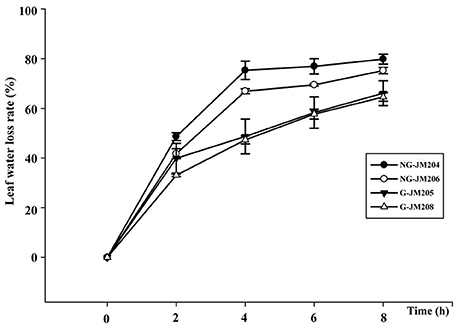 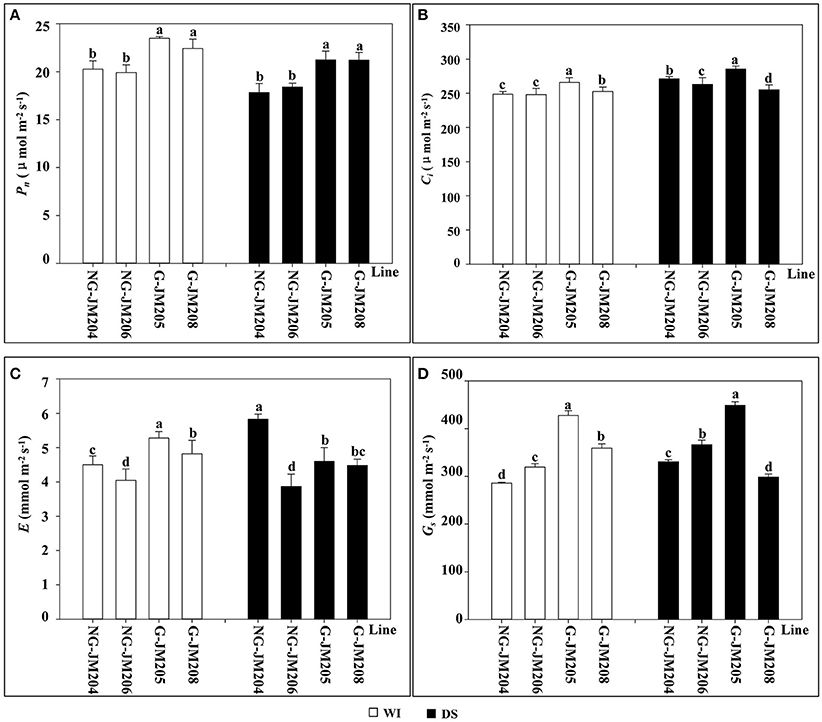 Indicators of PS II activity were seriously affected by various stresses, such as drought and salt (Maxwell and Johnson, 2000; Shepherd and Wynne Griffiths, 2006) and the photoinactivation of PS II complexes photoprotect functional neighbors (Anderson et al., 1997; Lee et al., 2001). In the present study, compared to the chlorophyll fluorescence indices measured in the dark under WI conditions, the Fv/Fm of glaucous NILs (G-JM205 and G-JM208) and non-glaucous NILs (NG-JM204 and NG-JM206) under DS conditions measured in the dark decreased (Table 3), which indicated that photosynthetic electron transport chain was sensitive to drought stress. Cuticular wax, as a photoprotective layer, can protect plants against UV radiation and drought stress (Butler, 1996; Shepherd and Wynne Griffiths, 2006). In this study, glaucous NILs had lower Fv/Fm decrease than that of non-glaucous NILs (Table 3 and Supplementary Table 1), suggesting that the plant protected its PSII against drought by accumulation of large amount of cuticular wax.

ABS/RC, the effective antenna size of an active reaction center (RC), is one of the four RC parameters (ABS/RC, TR0/RC, ET0/RC, and DI0/RC), which reflects the stepwise flow of energy through PS II at the RC level, which is influenced by the ratio of active/inactive RCs (Strasser and Strasser, 1995). In this study, the glaucous NILs had greater ABS/RC increase (42.4%) than non-glaucous NILs (37.5%), showing that drought can induce the effective antenna size increasing. And the greater increase in ABS/RC observed in the glaucous NILs leaves compared with the non-glaucous NILs leaves, may suggest that the leaf cuticular wax can be able to regulate the amount of light reaching the RC under drought stress.

PI was a very sensitive parameter in different crops and in most of environmental stress situations (Strasser et al., 2004; Christen et al., 2007; Oukarroum et al., 2007). It reflected the functionality of both PS I and II and gave us quantitative information on the current state of plant performance under stress conditions (Strasser et al., 2004; Živčák et al., 2008). In the present study, PI of glaucous NILs (G-JM205 and G-JM208) and non-glaucous NILs (NG-JM204 and NG-JM206) under DS conditions measured in the dark decreased. Compared to values of Fv/Fm, PI showed a much greater decrease in values, which was consistent with previous results that PI was more sensitive to the environmental factors than Fv/Fm (Li et al., 2005; Živčák et al., 2008; Su et al., 2014; Wang et al., 2014b). On the other hand, The higher decrease in PI in the non-glaucous leaves than in the glaucous leaves supports the idea that cuticular wax is an important protector for photosynthesis under drought stress.

Plant physiological traits as efficient methods are very advantageous with a potential for use in plant screening for stress tolerance. The main problem, especially in selection for improved drought tolerance, is the lack of reliable and sufficiently sensitive parameters of selection. Our results show that cuticular wax can maintain a relatively high water potential in the flag leaf, a relatively low ELWL, and a relatively high RWC, which indirectly resulted in the relative high Pn, PS II activity and grain yield of glaucous NILs under DS conditions. And leaf CWC is able to reflect the effect of drought stress on wheat grain yield, providing a suitable screening protocol is designed, which can also be used to differentiate tested wheat varieties to more or less drought tolerant.

The authors acknowledge the help from many directors and research fellows from Crop Research Institute, Shandong Academy of Agricultural Sciences (SAAS).

The Supplementary Material for this article can be found online at: https://www.frontiersin.org/article/10.3389/fpls.2016.01809/full#supplementary-material

Butler, D. R. (1996). “The presence of water on leaf surfaces and its importance for microbes and insects,” in Plant Cuticles: An Integrated Functional Approach, ed G. Kerstiens (Oxford: BIOS), 267–282.

Copyright © 2016 Guo, Xu, Yu, Shen, Li, Cheng, Liu, Liu, Liu, Zhao and Song. This is an open-access article distributed under the terms of the Creative Commons Attribution License (CC BY). The use, distribution or reproduction in other forums is permitted, provided the original author(s) or licensor are credited and that the original publication in this journal is cited, in accordance with accepted academic practice. No use, distribution or reproduction is permitted which does not comply with these terms.