The amplification and recombination of long terminal repeat (LTR) retrotransposons have proven to determine the size, organization, function, and evolution of most host genomes, especially very large plant genomes. However, the limitation of tools for an efficient discovery of structural complexity of LTR retrotransposons and the nested insertions is a great challenge to confront ever-growing amount of genomic sequences for many organisms. Here we developed a novel software, called as LTRtype, to characterize different types of structurally complex LTR retrotransposon elements as well as nested events. This system is capable of rapidly scanning large-scale genomic sequences and appropriately characterizing the five complex types of LTR retrotransposon elements. After testing on the Arabidopsis thaliana genome, we found that this program is able to properly annotate a large number of structurally complex elements as well as the nested insertions. Thus, LTRtype can be employed as an automatic and efficient tool that will help to reconstruct the evolutionary history of LTR retrotransposons and better understand the evolution of host genomes. LTRtype is publicly available at: http://www.plantkingdomgdb.com/LTRtype/index.html.

Extraordinary quantities of TEs, particularly the LTR retrotransposons, have greatly hampered the genome assembly and annotation. Thus far, a multitude of computational tools have been developed for the detection of LTR retrotransposons in the rapidly emerging genomic sequences. Common structural features of LTR retrotransposon elements make it possible to de novo detect novel LTR retrotransposon families having low sequence homology to known queries or families with a typical structure. With this regard, several programs were specifically designed for the ab initio computer discovery of LTR retrotransposons. LTR_STRUC (McCarthy and McDonald, 2003) is the best known of these programs, which has broadly been applied to numerous genomes, such as the Glycine max (Schmutz et al., 2010), Mus musculus (McCarthy and McDonald, 2004), Oryza sativa (Tian et al., 2009), and Pan troglodytes (Polavarapu et al., 2006). Furthermore, the other programs, including LTR_par (Kalyanaraman and Aluru, 2006), LTR_Rho (Rho et al., 2007), LTR_FINDER (Xu and Wang, 2007), LTR_harvest (Ellinghaus et al., 2008), and LTRdigest (Steinbiss et al., 2009), were developed for the de novo prediction of LTRs, and these programs consider further features of LTR retrotransposons in post processing steps to enhance the quality or sensitivity of the predictions. Most extensively implemented approaches of LTR retrotransposon identification were based on similarity searches against a target genome. These tools, such as REPuter (Kurtz et al., 2001), RECON (Bao and Eddy, 2002), RAP (Campagna et al., 2005), PILER (Edgar and Myers, 2005), RepeatMasker1 and LTR Annotator (You et al., 2015), are able to detect repeat sequences in the genome, but they incorporated almost no defragmentation and have definitely resulted in the overestimated number of LTR retrotransposons. Limitations of such sort of approaches are apparent, since they are able to find elements in the database without difficulty but they may scarcely predict repeat elements with distantly divergent sequences. All the above-mentioned annotation tools may limitedly apply to detecting full-length elements (LTR-IN-LTR) and their fragmented elements, but they are unable to reconstruct structurally complex elements as well as their nested cluster.

Although TE-nest (Kronmiller and Wise, 2008, 2013) and REannotate (Pereira, 2008) can identify nested events of transposable elements, they fail to adequately locate the structurally complex LTR retrotransposons. Until now, little has been known regarding genome-wide patterns of structurally complex retrotransposons and their contributions to the modification of genomes. The difficulty increases without a doubt to efficiently annotate such elements due to the recombination, DNA losses and nested events in a genome. Single Molecule Real Time (SMRT) Sequencing technologies are able to generate long reads that are essential to complete plant reference genomes that will provide unprecedented opportunities to obtain in-depth knowledge on evolutionary behaviors of retrotransposons and explore their contributions to the genome structure, function and evolution on the strength of large-scale genome information. Thus, it is urgently needed to develop efficient tools to genome-wide characterize various types of structurally complex retrotransposon elements and better annotate genomes in rapidly deposited large-scale genomic sequences.

Here we developed a novel software program, named LTRtype, for the purpose of proficient discovery of diverse types of the structurally complex LTR retrotransposons (Figure 1) and nested insertions (Figure 2) in large quantities of genomic sequences. In addition to an effective solution of fragmented retrotransposon sequences from BLAST searches, this program has incorporated a combination of rapid algorithms, which may not limit to LTR pairs but indeed is able to identify retrotransposon elements with three or more LTRs. These elements include: (1) normal full-length elements (LTR-IN-LTR); (2) solo-LTR elements; (3) complex elements with three or more LTRs (e.g., LTR-IN-LTR-IN-LTR); (4) fragmented elements of the above-mentioned structural types; and (5) nested insertions among these different LTR retrotransposon elements. The program LTRtype reported here is able to proficiently mine increasingly sequenced genomes by using multithreading technologies, and thus provides a convenient and friendly service for users. 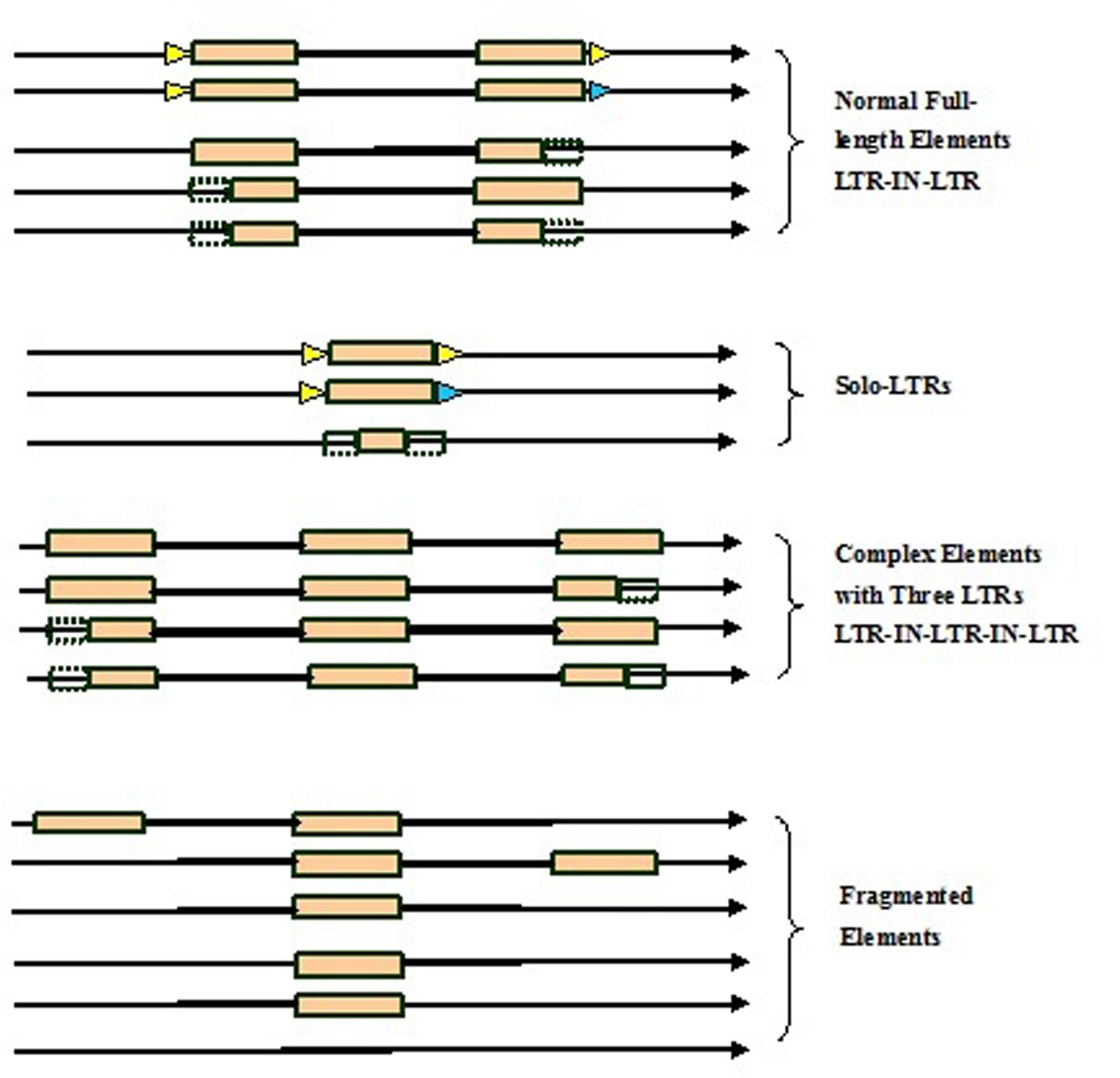 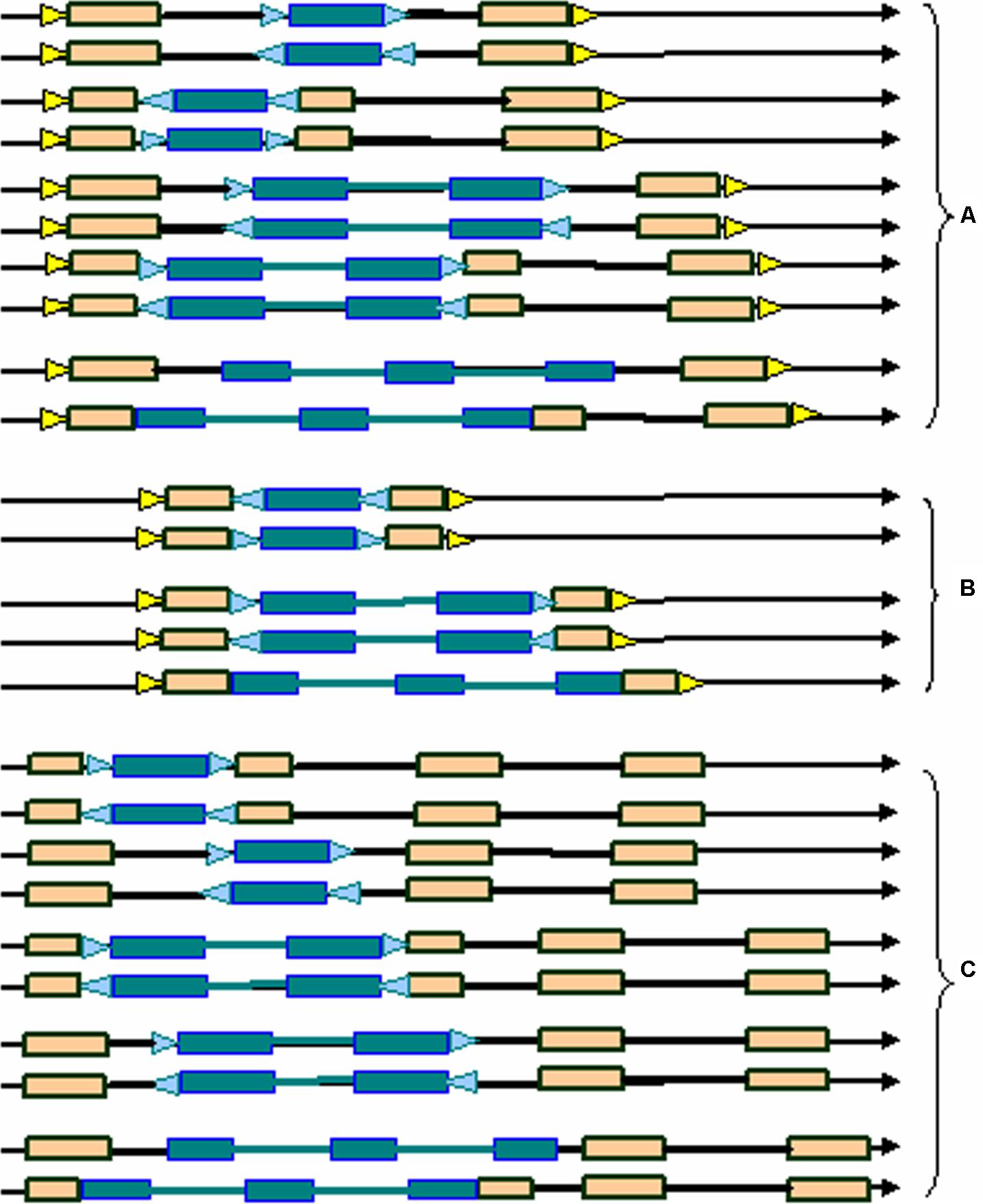 The first step of LTRtype in the flowchart (as shown in Figure 3) is to collect all full-length LTR retrotransposons and construct library files in FASTA format. There are two major methods to retrieve the full-length LTR retrotransposons. One is to straightforwardly download from the known repeat databases, e.g., Repbase: http://www.girinst.org/; PlantGDB: http://www.plantgdb.org; Plant repeats: http://www.tigr.org/tdb/e2k1/plant.repeats/, while the other is to mine target genomes by using authorized tools of LTR retrotransposons, such as LTR_STRUC (McCarthy and McDonald, 2003), LTR_FINDER (Xu and Wang, 2007), LTR_harvest (Ellinghaus et al., 2008), and so on. Then, the library will be merged by their overlapping lengths and sequence similarities. 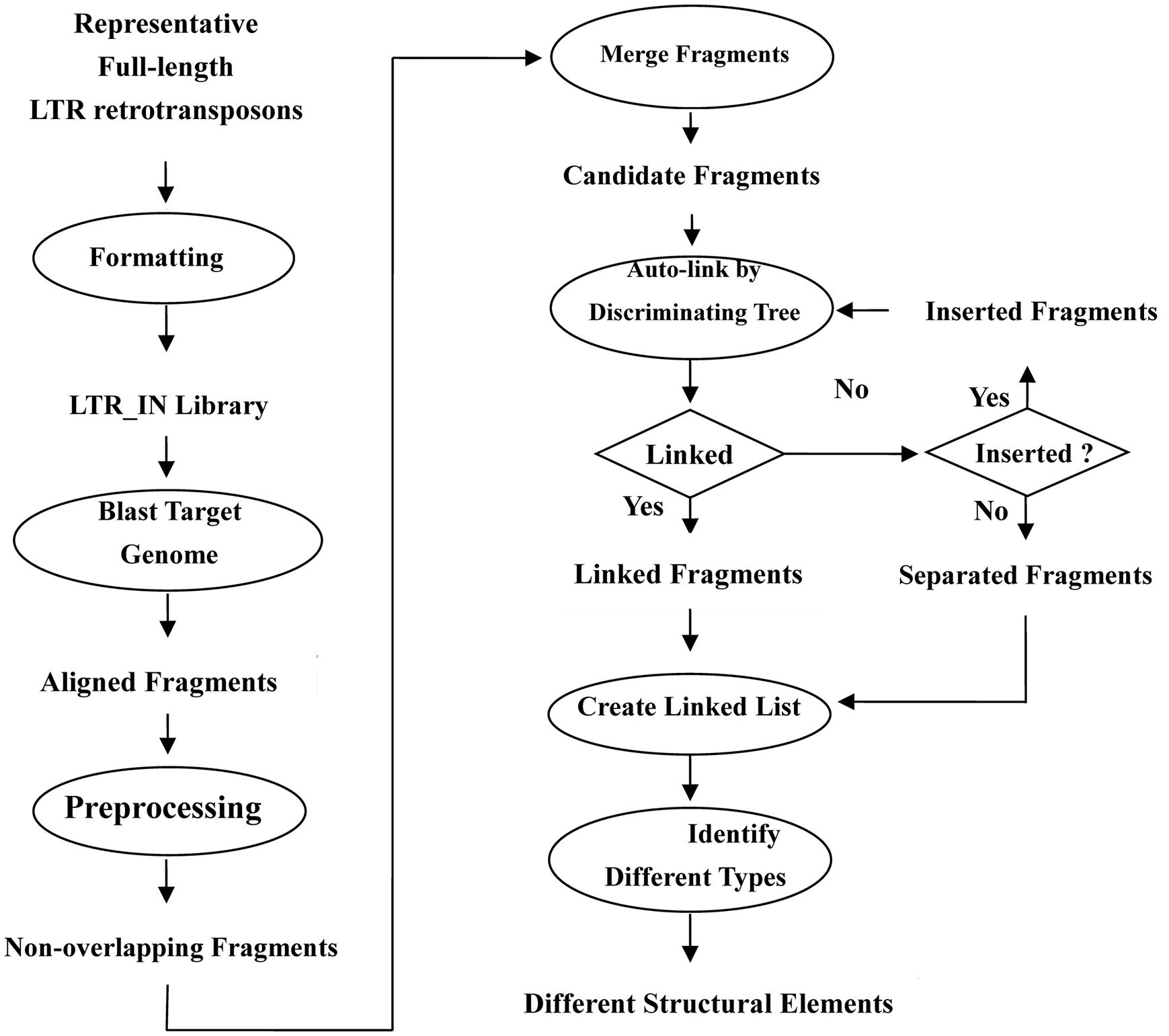 FIGURE 3. Flowchart of the characterization of LTR retrotransposon elements in the program LTRtype.

The second step is to align the LTR and IN libraries with target genomes using RepeatMasker and preprocess the aligned fragments by eliminating the overlapped elements.

The third step is to merge adjacent fragments into longer or more intact LTR or IN sequences that belong to the same family, as RepeatMasker usually align a complete LTR or IN fragment into several fragments that may be separately or partially overlapped. The yielded datasets become candidate fragments for further analyses.

The last step is to create a linked list and categorize different structural types of LTR retrotransposon elements. 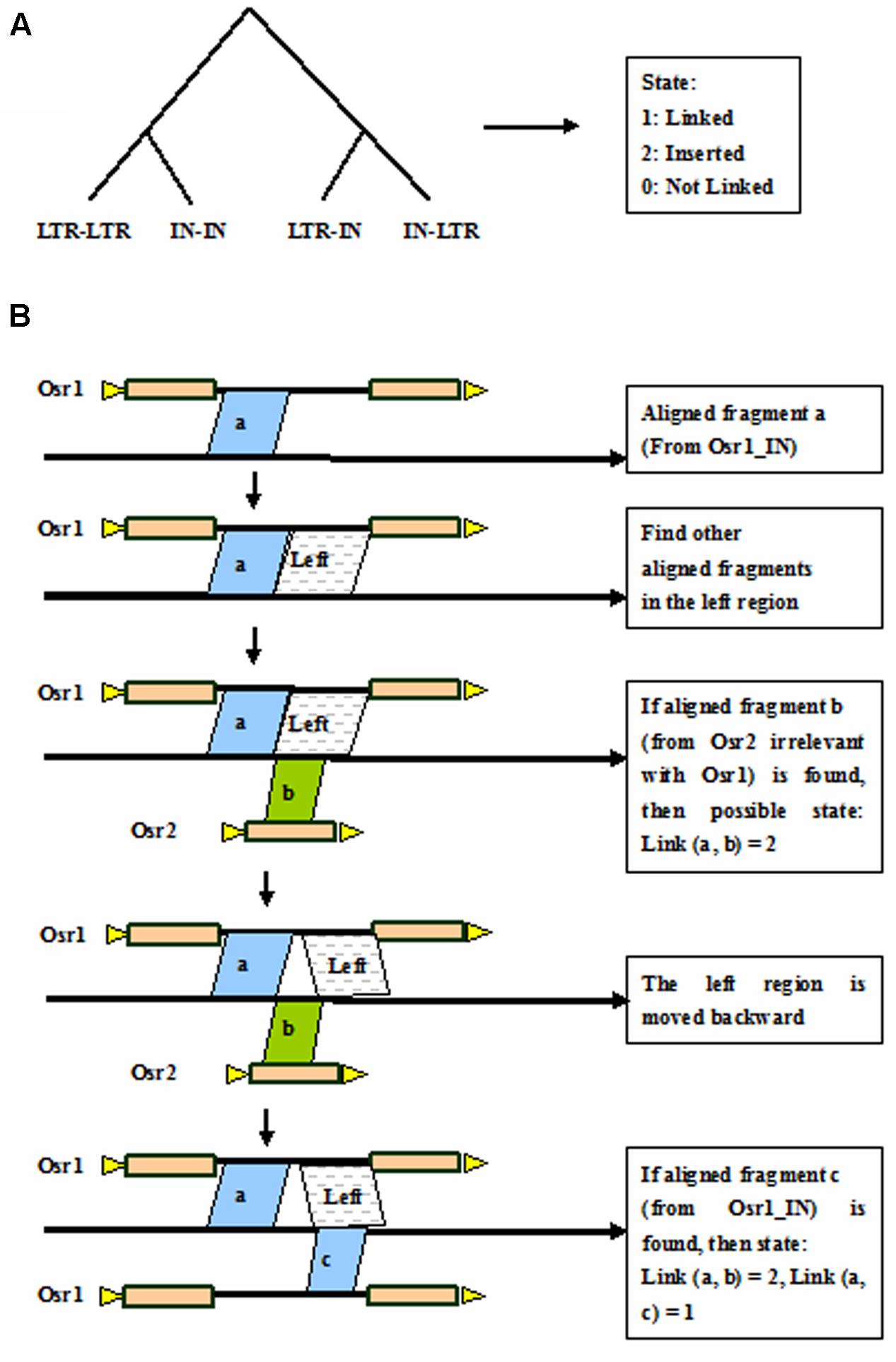 FIGURE 5. The creation of the dynamic linked list. a, b, c, d, e, f, and g Show the aligned fragments of LTR retrotransposons.

Mining and Analyzing LTR Retrotransposons in the A. thaliana Genome

Nucleotide sequence divergence among pairs of intra-element LTRs was used as a molecular clock, as they are identical at the time of insertion. The ages of full-length LTR retrotransposons were then determined by comparing their 5′ and 3′ LTRs (SanMiguel et al., 1998). MEGA5 (Tamura et al., 2011) was employed to calculate the number of transition and transversion mutations. Insertion dates were estimated using the Kimura two-parameter method (Kimura, 1980). The average mutation rate of 1.3 × 10-8 substitutions per synonymous site per year (Ma and Bennetzen, 2004) and 7 × 10-9 substitutions per synonymous site per year (Ossowski et al., 2010) were applied to estimate insertion times of the LTR retrotransposons in the A. thaliana genome. The time (T) since element insertion was estimated using the formula: T = K/2r.

The hardware requirements vary with genome sizes. Both Intel and AMD x64 architectures are supported. Note that there are no specific requirements including CPU, memory and disk space to run the LTRtype. Taking rice genome (∼400 Mb) for an example, it is needed to have ∼500 Mb RAM, 4+ cores, and ∼1 Gb disk space.

LTRtype provides some default parameter settings to make users convenient, but the four parameters (-P,-p -i, and -d) must be set by users themselves. -P follows the path of RepeatMasker; -p follows the path of blast searches; -i follows the LTR retrotransposon library file (FASTA format). Reference LTR names may not have the gap and ‘| ’, but they must be suffixed with the string ‘_LTR.’ Likewise, reference IN names must be suffixed with the string ‘_IN’; -d follows the genome sequence file (FASTA format). In order to facilitate the view output, the sequence names do not contain the gap and ‘|’.

Running LTRtype generates output files that record the detailed information that is a step-by-step guide for users (Supplementary File S3). Users can read the results from each running step. Loopx directory is the most important output and records detailed dataset for each layer of LTR retrotransposons. For example, type.num.x provides copy number of all structural types of LTR retrotransposons; and type.all.x gives the physical positions and content information of all structural types.

We tested the efficiency of LTRtype to characterize LTR retrotransposons by comparing with REannotate (Pereira, 2008) and TEnest (Kronmiller and Wise, 2013). The expected running times depend of course on the cpu speed/number of cores used for the analysis, but LTRtype only requires nearly half time compared to REannotate and TEnest. Considering that TEnest is a time-consuming program for the analysis of a large number of genome sequences (Kronmiller and Wise, 2013), we merely tested 2 Mb of genomic sequences from Chromosome 10 by running these three tools. We found that LTRtype captured more numbers of normal elements and solo-LTRs but fewer numbers of truncated and particularly nested events than TEnest (Table 1). The pattern holds true while comparing LTRtype with REannotate (Table 1); our results showed that LTRtype reported 438 copies, whereas REannotate identified up to 580 copies (Table 1), suggesting that LTRtype had a better solution of the defragmentation of LTR retrotransposon elements. Detailed analysis of structurally different types of LTR retrotransposons in 2 Mb maize genome sequence identified at least 79 elements, including 59 normal, 7 complex, and 13 truncated retrotransposon elements that all contained a LTR-IN-LTR structure (Table 2). We further analyzed the Chromosome 10 of maize by comparing REannotate and LTRtype. A consistent result, as obtained by using 2 Mb of genomic sequences (Table 1), showed that LTRtype characterized more numbers of normal retrotransposons and solo-LTRs but fewer numbers of truncated and nested elements than REannotate (Table 3). Apparently, LTRtype is able to identify a large number of structurally different types of elements, showing its exclusive applications for LTR retrotransposon discovery.

Detection of Structurally Complex and Nested LTR Retrotransposons in the A. thaliana Genome

FIGURE 6. The chromosomal locations of the complex retrotransposon elements with the three LTRs including two adjacent elements in flanking genomic regions of the A. thaliana genome. (A–D) The four complex retrotransposons with the three LTRs. Rectangles in brown and blue represent LTRs from the two different elements, black and blue thick lines denote internal regions from the two different elements, and arrows show the direction of DNA strand.

This work was supported by Yunnan Innovation Team Project to L-ZG.

We would thank the associate editor and reviewers for their valuable comments.

The Supplementary Material for this article can be found online at: https://www.frontiersin.org/article/10.3389/fpls.2017.00402/full#supplementary-material

Copyright © 2017 Zeng, Zhao, Zhang and Gao. This is an open-access article distributed under the terms of the Creative Commons Attribution License (CC BY). The use, distribution or reproduction in other forums is permitted, provided the original author(s) or licensor are credited and that the original publication in this journal is cited, in accordance with accepted academic practice. No use, distribution or reproduction is permitted which does not comply with these terms.