Phytophthora root rot (PRR), caused by Phytophthora sojae, has negative effects on soybean yield in China and can be controlled by identifying germplasm resources with resistance genes. In this study, the resistance locus RpsHN in the soybean line Meng8206 was mapped using two mapping populations. Initial mapping was realized using two recombinant inbred line (RIL) populations and included 103 F6:8 RILs derived from a cross of Meng8206 × Linhedafenqing, including 2600 bin markers, and 130 F6:8 RILs derived from a cross of Meng8206 × Zhengyang148, including 2267 bin markers. Subsequently, a 159 F2:3 secondary population derived from a cross of Meng8206 × Linmeng6-46, were used to fine map this locus using SSR markers. Finally, the resistance locus from Meng8206 was fine mapped to a 278.7 kb genomic region flanked by SSR markers SSRSOYN-25 and SSRSOYN-44 at a genetic distance of 1.6 and 1.0 cM on chromosome 3 (Chr. 03). Real-time RT-PCR analysis of the possible candidate genes showed that three genes (Glyma.03g04260, Glyma.03g04300, and Glyma.03g04340) are likely involved in PRR resistance. These results will serve as a basis for cloning, transferring of resistant genes and breeding of P. sojae-resistant soybean cultivars through marker-assisted selection.

Phytophthora root rot (PRR), caused by the soil-borne oomycete pathogen Phytophthora sojae, is the second highest yield-suppressing disease (Schmitthenner, 1985; Wrather and Koenning, 2009). This disease has resulted in significant economic losses worldwide (Tyler, 2007). In Heilongjiang Province of China, P. sojae is widespread but unevenly distributed. It has been estimated that more than 150,000 ha of the soybean grown in fields become infected annually (Tian et al., 2016).

Cultivating Phytophthora-resistant soybean cultivars can reduce the incidence of PRR. There are two types of resistant cultivars: race-specific resistance and partial resistance (Sugimoto et al., 2012). Partial resistance is controlled by multiple genes and exhibits broad-spectrum and durable resistance to a range of pathogen species (Kou and Wang, 2010). However, in plants, partial resistance may be lost under high disease pressure to P. sojae (Dorrance, 2003). One of the most effective methods to control plant diseases is the development of varieties with vertical resistance genes (Flor, 1971).

Another measure for PRR resistance is pyramid-breeding. Pyramiding resistance genes may increase the resistance of soybean cultivars to many pathogen races, and pyramiding genes could be rapidly achieved using molecular markers (Lohnes and Schmitthenner, 1997). Based on the methods of controlling PRR, the identification of a novel Rps gene in soybean cultivars is needed to study resistance, and the development of new molecular markers is needed for marker-assisted selection (MAS).

The germplasm Meng8206 (ZDD11436) is a soybean line developed from Yangtze-Huai region of China, studied in drought-tolerance and cyst nematode-tolerance (Duan et al., 2008; Wang et al., 2015). The objectives of the present study were to analyze the inheritance of Meng8206 resistance, identify resistance loci and manipulate predicted candidate genes.

A total of eight P. sojae isolates (Supplementary Table 1) with different virulence capabilities were provided by Professor Yuanchao Wang of Nanjing Agricultural University and maintained on V8 juice agar medium (10% V8 vegetable juice, 0.02% CaCO3 and 1.0% Bacto-agar). These isolates were used to evaluate the resistance identified among the parents and 15 differential cultivars. P. sojae HeN08-35 (virulence formula is 3a, 3c, 4, 5, 6 and 7) was used to evaluate two mapping populations.

The genomic DNA was extracted from the young leaves of two RIL populations according to Zhang and Wang (2004) and used to construct the genomic DNA library after Taq I digestion according to Baird et al. (2008). The 400- to 700-bp DNA fragments were sequenced using the Illumina HiSeq 2000 standard protocol for MSG (multiplexed shotgun genotyping), and 90-mer paired-end reads were generated (Andolfatto et al., 2011). SOAP2 (Li et al., 2009) software was used for aligning the sequenced reads to the Williams 82 reference genome. SNP calling and genotyping were conducted using RealSFS software (Yi et al., 2010) based on the Bayesian estimation. Subsequently, using a three-standard filter, 50 < depth < 2500, a probability of site mutation ≥95%, and every SNP loci separated by at least 5 bp, we obtained high confidence SNPs.

According to the initial mapping physical position, the sequence was downloaded from Phytozome Glyma1.01, and simple repeat sequences were assessed using SSR Hunter 1.32. New SSR markers were designed using Primer Premier 5.0 (Premier Biosoft International, Palo Alto, CA, USA). In addition, some markers from Soybase3 and the published paper (Zhang et al., 2013b) were used. PCR was conducted according to Sun et al. (2014).

The CDS sequences for the candidate genes were obtained from Phytozome4. The primers for qRT-PCR were designed using Primer Premier 5.0. In addition, the housekeeping gene Actin was used as a control. These primers are shown in Supplementary Table 2, and qRT-PCR was conducted using a Light Cycler 480 instrument.

Phenotype Reaction of the Parents to P. sojae Isolates

The 8 different isolates were applied to evaluate 4 parents and 15 differentials. The results showed that Meng8206 was resistant to the HeN08-35 isolate and was susceptible to the other 7 isolates (Supplementary Table 3). The phenotype reaction of Meng8206 was different for each of the 15 differentials, conferred through an independent Rps gene. The three parents Zhengyang148, Linhedafenqing and Linmeng6-46 were susceptible to all selected P. sojae isolates, and their phenotype reactions were the same as Williams. In addition, we also analyzed the genetic diversity and phenotypic relationships of the four parents and 15 differentials to 8 P. sojae using cluster tree analysis in the NTSYS program (Figure 1). When the coefficient was more than 0.8, Meng8206 existed independently as a subgroup, suggesting that Meng8206 may possess a novel Rps gene. 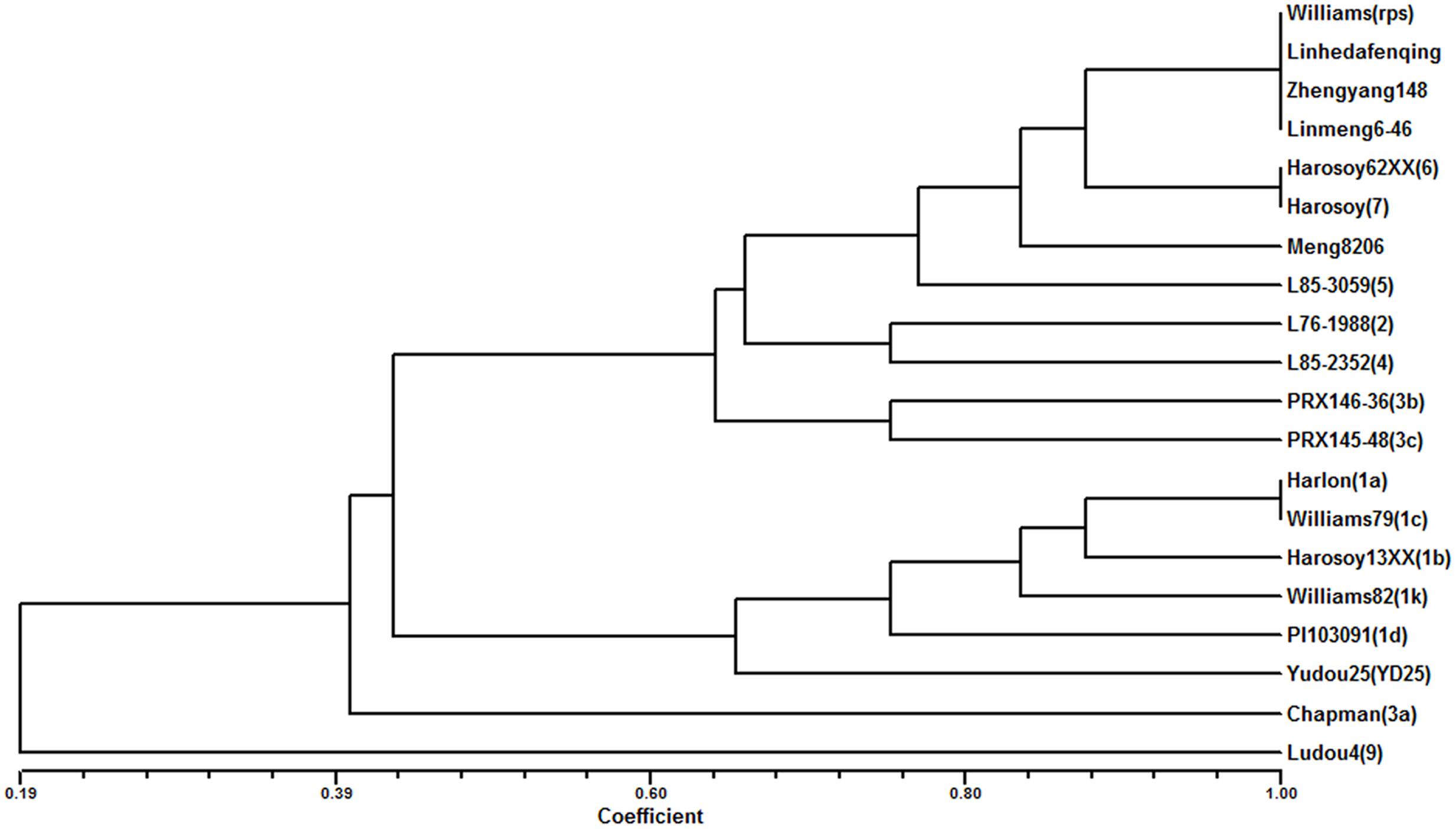 Initial Mapping of the RpsHN Gene

Fine Mapping of the RpsHN Locus 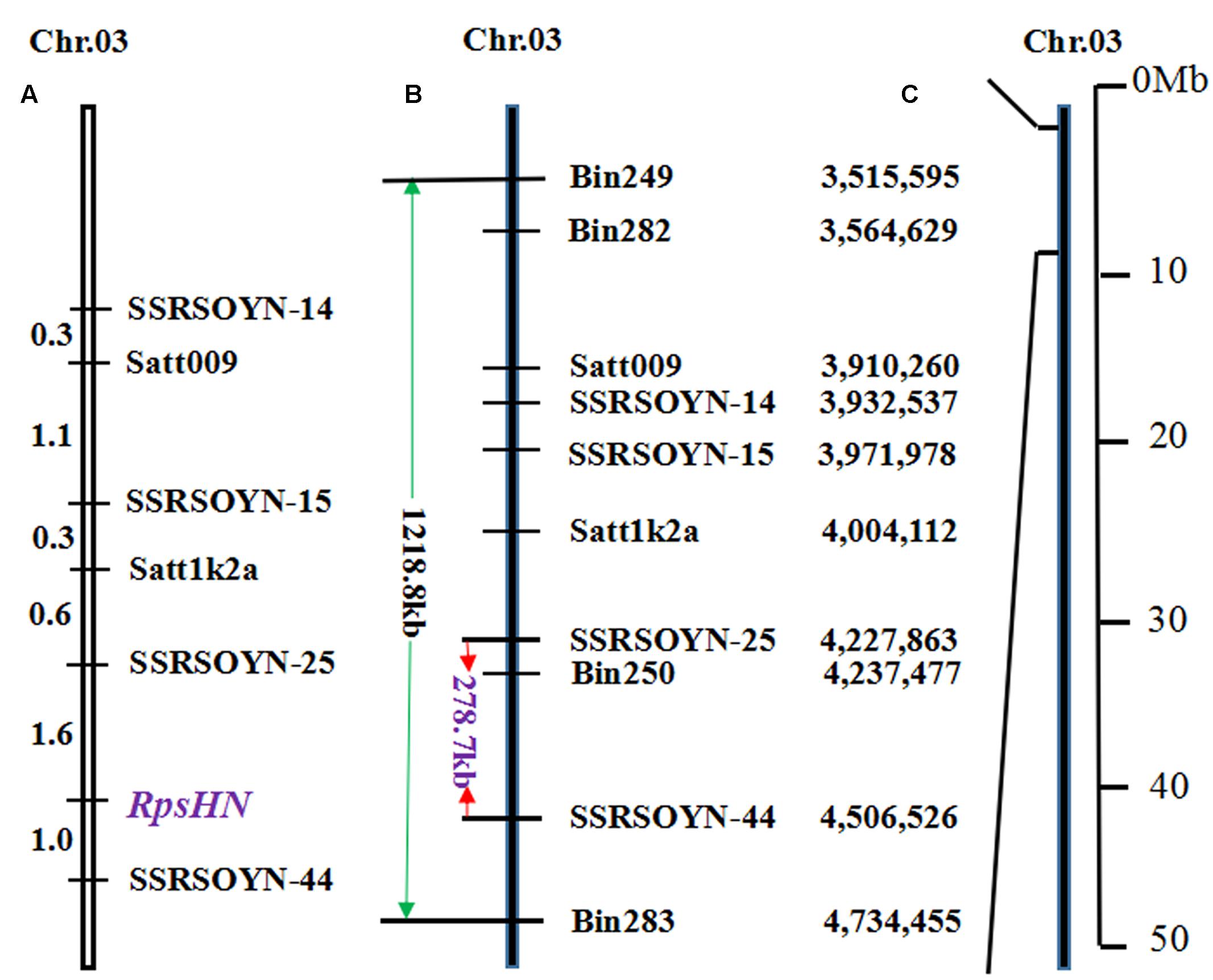 FIGURE 2. Genetic linkage map and physical map of RpsHN on chromosome 3. Genetic distance (cM) is shown on the left, and markers are shown on the right. (A) Linkage map of RpsHN from the present study. (B) Physical map of SSR and bins markers from the present study. The green line refers to the physical distance between bin249 and bin283, and the red line refers to the fine mapping region. (C) Physical position of the mapped region of RpsHN on chromosome 3 (Lin et al., 2013).

In addition, a total of 183 repeat motifs (SSR loci) in this region were identified using SSR hunter and used for the fine mapping of RpsHN. Four SSR markers, SSRSOYN-14, SSRSOYN-15, SSRSOYN-25 and SSRSOYN-44, showed polymorphisms between Meng8206 and Linmeng6-46 using the BSA method (Supplementary Table 4). Together with satt009 and satt1k2a, six polymorphic marker segregation patterns were revealed by analyzing 159 F2:3 families, consistent with the 1:2:1 ratio (Supplementary Table 5).

The genomic region of Williams 82 was delimited by the markers SSRSOYN-25 and SSRSOYN-44. A BLAST search showed that the physical distance of SSRSOYN-25 and SSRSOYN-44 are at nucleotide position 4,227,863 and 4,506,526 in Glyma1.0, is appropriately 278.7 kb (Figure 2B). A total of eight genes were annotated according to the Glyma 1.0 (Supplementary Table 6). Among these genes, Glyma.03g04260 and Glyma.03g04300 encoded NB-ARC domain-containing disease resistance protein. Glyma.03g04340 encodes serine/threonine protein kinase (STK), which is involved in plant disease resistance. These genes were predicted as possible candidate genes. 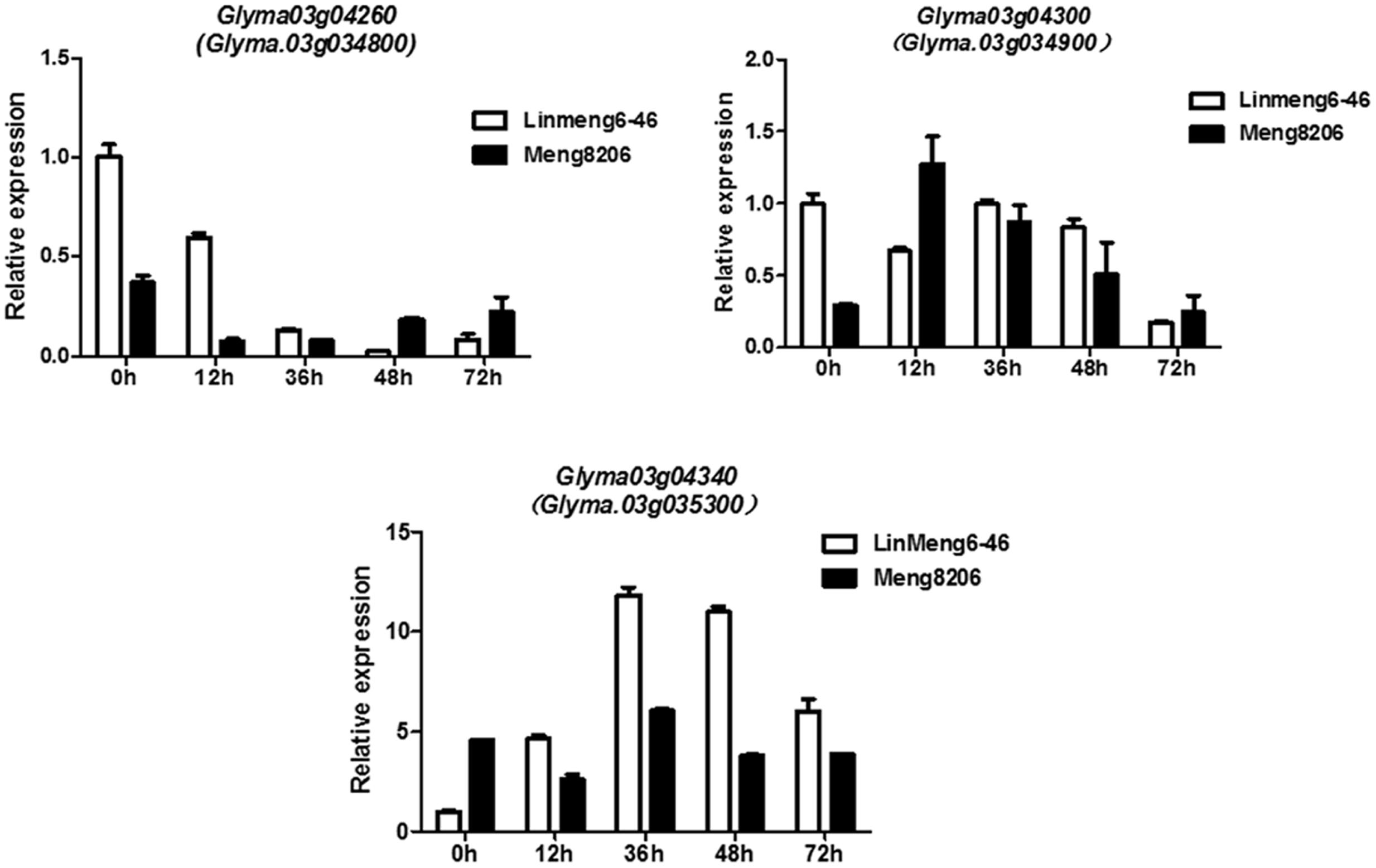 Soybean [Glycine max (L.) Merr.] is one of the most important oil crops in China. Many cultivars/lines have been studied for resistance to P. sojae and the identification of resistance loci (Zhang et al., 2014; Huang et al., 2016). In the present study, we identified the loci of the Meng8206 for resistance to P. sojae HeN08-35 using two mapping populations. Based on the phenotype reaction types of Meng8206 and the physical position of RpsHN on chromosome 3, we inferred that RpsHN is a novel gene tightly linked to Rps1 or a new allele at the Rps1 locus. Three genes, Glyma.03g04260, Glyma.03g04300 and Glyma.03g04340, were considered as potential candidate genes.

Soybean line Meng8206 was evaluated using eight isolates with different virulence formulas in this study. The results showed that Meng8206 was resistant to the HeN08-35 isolate and was susceptible to the other seven isolates. The parent Meng8206 showed resistance to HeN08-35 isolate as shown in Supplementary Figure 3. We proposed Meng8206 contains at least one novel locus resistant to HeN08-35. Fortunately, we used the F6:8 RIL populations derived from a cross of Meng8206 × Linhedafenqing and Meng8206 × Zhengyang148 to map the locus, and found that only a single resistance locus was detected on Chr03. Subsequently, this locus was verified by secondary populations derived from a cross of Meng8206 × Linmeng6-46. To F6:8 RIL population (Meng8206 × Zhengyang148), only a significant resistance locus was detected between marker bin282 and bin283 which fitted the expected 1:1 segregation ratio by χ2 test. Segregation distortion of phenotype may be due to the variation in genetic background of the progenies.

Previous studies have shown that 11 Rps genes were mapped to the N group, Rps1 allele genes (including five alleles Rps1a, Rps1b, Rps1c, Rps1d, and Rps1k), Rps7, Rps9, Rps1?, RpsUN1 and RpsYD29. RpsHN clustered in a subgroup different from the Rps1 alleles, RpsYu25 and Rps9 subgroups. Rps7 was located above marker satt009 (Bernard and Cremeens, 1981; Wu et al., 2011), while RpsHN was located below marker satt009; thus, the RpsHN locus is different from Rps7. The Rps gene in Waseshiroge (Sugimoto et al., 2011) was located “below” Satt009 and was flanked by Satt009 (0.9 cM), while RpsHN was located “below” Satt009 (3.6 cM) and was located “above” SSRSOYN-44 and was flanked by SSRSOYN-44(1.0 cM). So the Rps gene from Waseshiroge may be located close to Satt009 (nucleotide position 3,919,203), and RpsHN located close to SSRSOYN-44 (nucleotide position 4,506,526) (Figure 2A). Because Willimas82 was acted as reference sequence, RpsHN may be different from the Rps gene in Waseshiroge. RpsUN1 (Li et al., 2016) locus mapped between BARCSOYSSR_03_0233 and BARCSOYSSR_03_0246 which were unfortunately not polymorphic between the two parents Meng8206 and Linmeng6-46. Landrace PI 567139B (RpsUN1) was resistant to P. sojae pmg (17)-1 (pathotypes corresponding to races 17) and Meng8206 (RpsHN) was susceptible to P. sojae P7063 (pathotypes corresponding to races 17) (Supplementary Table 3), two mapping parents had different resistance reaction. So we think RpsUN1 may be different from RpsHN. RpsYD29 (Zhang et al., 2013b) and RpsHN were separated by the SSR marker satt1k2a. These results indicated that RpsHN may be a new gene difference from Rps1 or a new allele gene of Rps1.

We identified putatively a novel resistance gene, RpsHN, which can be used for breeding cultivars for Phytophthora resistance. The tightly linked SSR markers SSRSOYN-25 and SSRSOYN-44, as the functional markers, could contribute to the MAS breeding program.

The Supplementary Material for this article can be found online at: https://www.frontiersin.org/article/10.3389/fpls.2017.00538/full#supplementary-material

Copyright © 2017 Niu, Guo, Sun, Li, Cao, Li, Huang, Zhao, Zhao and Xing. This is an open-access article distributed under the terms of the Creative Commons Attribution License (CC BY). The use, distribution or reproduction in other forums is permitted, provided the original author(s) or licensor are credited and that the original publication in this journal is cited, in accordance with accepted academic practice. No use, distribution or reproduction is permitted which does not comply with these terms.