The rubber tree is a typical tropical rain forest species, native to the Amazon, and is now found in more than forty countries and regions in Asia, Africa, Oceania, and Latin America. Rubber tree plantations have become the main source of income for many tropical countries through the production of latex and wood, particularly in Southeast Asia, including Malaysia, Indonesia, Thailand, Sri Lanka, and India. China first introduced rubber trees in 1904, and they were planted in Hainan, Guangdong, Guangxi, Fujian, Yunnan and Taiwan province, of which Hainan province is one of the major planting areas (He and Huang, 1987). Since 1950, the rubber tree planting areas have expanded rapidly in China. By the end of 2014, the rubber tree planting area had reached 1.14 million hectares in China. However, with the increase of rubber tree plantations area and increasing attention to the ecological environment, more and more research has begun to pay attention to the potential ecological consequences of rubber tree planting. Previous studies have shown that large-scale planting of rubber trees bring some negative effects to the regional ecological environment, such as soil erosion (Wen et al., 2008; Luo and Liu, 2012), biodiversity decreases (Li et al., 2007; Cotter et al., 2012; Ahrends et al., 2015; Zheng et al., 2015), soil fertility decreases (Meng et al., 2001; Zhang and Zhou, 2009; Li et al., 2012), soil organic carbon and microbial biomass loss (Zhang and Zhang, 2003; Yang et al., 2004; Blecourt et al., 2014), etc. Most of the first-generation rubber tree plantations in China were established on the natural vegetation of secondary forest or tropical shrub grassland. Given long-term large-scale alternative natural vegetation, accompanied by the interference of tapping, fertilization, land clearing and other human activities, one must question whether these factors will impact the soil microorganisms.

The study area was located in Qiongzhong County, Hainan Province, in the southern part of China. The climatic conditions are tropical monsoon with an annual mean temperature of 22.9°C, and an average annual precipitation of 2,278 mm. Rubber tree plantations aged 5, 10, 13, 18, 25, and 30 years were chosen as study sites. The sites are located latitude from 19°14′ to 19°16′, and longitude from 109°44′ to 109°45′, and at an altitude ranging from 175 to 207 m (Table 1). The topography, soil types and rubber-tapping method of these plots were basically consistent, and all used conventional cultivation and management measures for rubber tree plantations. The cultivar of rubber tree was PR107. The spacing in the rows and spacing between rows was 3 × 7 m. Six standard plots of 1 ha were set up in the rubber tree plantations.

The parent material of soil in the study area was classified as latosol. In May 2016, fifteen soil sampling points were set up according to the “S” shape in each rubber tree plantation plot, and five soil sampling points were mixed into one composite sample after the soil was collected. This method meant that three composite soil samples were obtained from each rubber tree plantation. As a result, a total of eighteen soil composite samples were collected from six plantations at a depth of 0–20 cm. Subsequently, roots and impurities were removed from soils. One fraction was air dried and ground to pass through a 2 mm mesh size sieve for subsequent soil property analyses, while the remaining fraction was taken to the laboratory in cool boxes with ice bags, and stored at low temperature (−80°C) for high-throughput sequencing analysis.

Total genomic DNA was extracted with an AxyPrep DNA Gel Extraction Kit (Axygen Biosciences, Union City, CA, U.S.) according to the manufacturer's instructions. The integrity of DNA was validated by agarose gel electrophoresis. The quality of the DNA samples was checked with a spectrophotometer (Nanob Drop, ND2000, Thermo Scientific, Wilmington, DE, USA) after extraction.

Pairs of reads were spliced into a sequence according to the direct overlap relationship of PE (paired-end) reads. At the same time, the quality of reads and splicing effect were controlled and filtered, and correction of the sequence direction was made according to the end of the box sequence. Finally, the high-quality sequences obtained after filtering were assigned to samples according to barcodes.

The most abundant sequence in each OTU was clustered using Use arch at 97% sequence identity (Edgar, 2013). Representative sequences were taxonomically classified using a Bayesian classifier (Wang et al., 2007), and then the representative sequences assigned against the Silva database (Pruesse et al., 2007; Quast et al., 2013) to gain the taxonomic information of bacterial communities. Bacteria were classified at the level of phylum, class, order, family, and genus.

Differences in microbial diversity indices among samples were tested using Duncan's new multiple range test of variance performed by DPS software. A non-metric multidimensional scaling (NMDS) ordination to illustrate the clustering of bacterial community composition variation was conducted using the Vegan software based on the Bray-Curtis distance of OTUs. The shifts in the relative abundance of the bacterial phyla were displayed by a heat map (Kolde, 2015), which was modeled with vegan package in R. SPSS 19.0 software was used to perform a Pearson correlation analysis of soil properties and the diversity indices of bacterial communities. The Pearson correlation coefficient of the top 15 abundant bacterial phyla and soil properties, as well as the top 15 abundant bacterial phyla and vegetation were calculated, and displayed on the heat map. 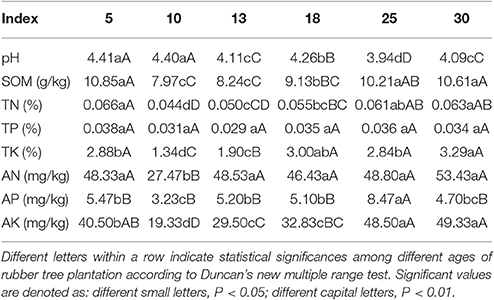 Diversity of the Soil Bacterial Community in Rubber Tree Plantations

A total of 438,870 high-quality 16S rDNA sequences were obtained from 18 soil samples in six rubber tree plantations. These sequences were distributed among 2,073 different OTUs at 97% similarity, and its representative sequences are shown in Table S1. 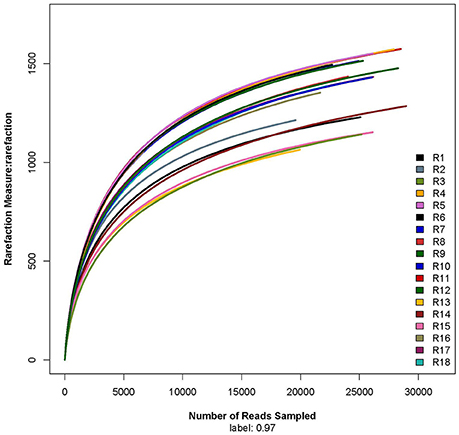 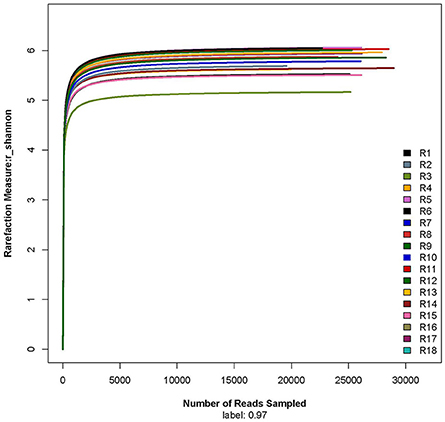 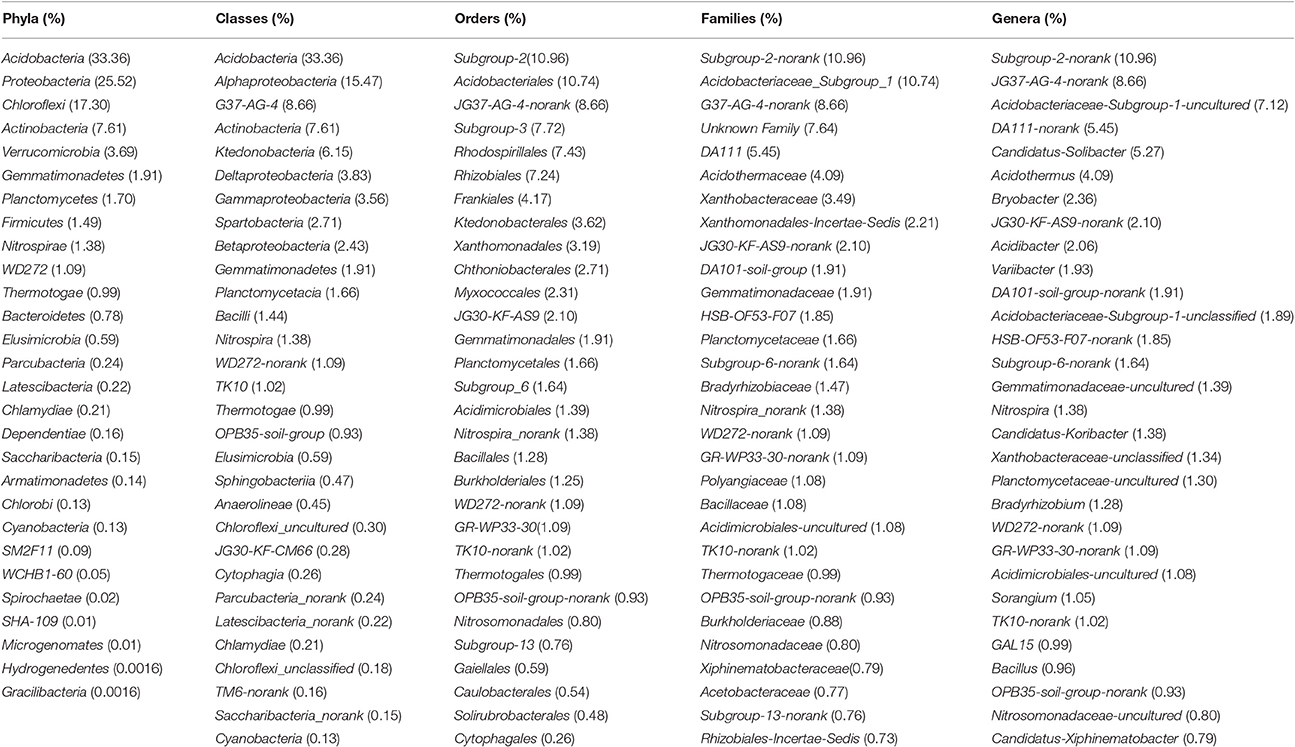 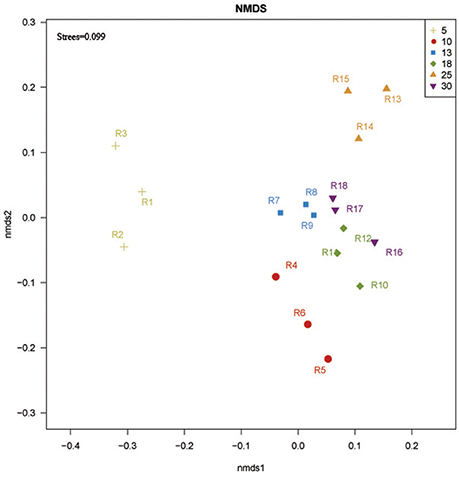 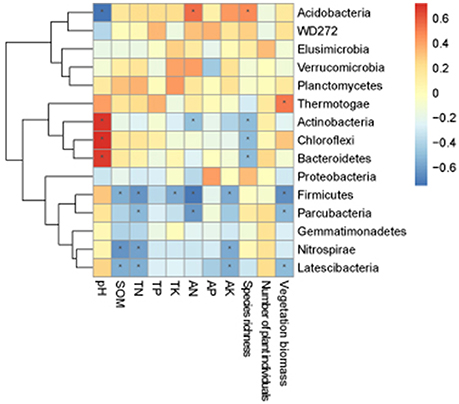 Figure 5. Correlation heat map of the top fifteen phyla and soil properties and vegetation. X and Y axis are environmental factors and phyla. R in different colors to show, the right side of the legend is the color range of different R values. The value of P < 0.05 is marked with “*”.

In the plantations, the soil was acidic and depleted of soil nutrients, especially phosphorus and potassium. The amount of soil nutrients was lower in early stages of tapping (10 year) and in the high yield period (13 and 18 year). These results were consistent with previous research results (Aweto, 1987; Wang et al., 1999; Abraham et al., 2001; Cao et al., 2008; Qiu et al., 2009; Wu et al., 2009). Minerals form a considerably large component of the rubber (latex), which is removed via current tapping system, and thus rubber trees will absorb nutrients from soil to meet growth and production needs.

Soil pH was an important factor affecting the soil bacterial community, as has been confirmed in previous studies (Fierer and Jackson, 2006; Nacke et al., 2011). We found that all diversity indices of soil bacteria were significantly negatively correlated with soil pH in rubber plantations, also seen in previous studies. Some scholars believe that diversity of soil bacteria is strongly negatively correlated with soil pH when the soil pH is below 6.5. The decrease of bacterial diversity in 30 year-old rubber tree plantations may be related to the decrease of soil pH value. Researchers have put forward two assumptions about a putative relationship between soil pH and diversity of soil bacterial community. First, pH directly imposes a physiological constraint on soil bacteria, altering competitive outcomes or reducing the net growth of individual taxa unable to survive if the soil pH falls outside a certain range. Many bacteria have intracellular pH levels close to neutral, and therefore extreme pH may impose a significant stress that certain taxa may tolerate better than others. A second hypothesis states that soil pH may not directly alter bacterial community, but may instead function as an integrating variable that provides an integrated index of soil conditions (Lauber et al., 2009). There are a number of soil characteristics (e.g., nutrient availability, cationic metal solubility, organic C characteristics, soil moisture regimen) that are often directly or indirectly related to soil pH, and these factors may drive the observed changes in community composition (Bissett et al., 2011; Suleiman et al., 2013).

We found that the diversity and composition of soil bacterial community were closely related to soil properties (especially soil pH) and vegetation. Rubber tree plantations are a typical artificial forest ecosystem and originally part of the forest ecosystem, so maintains some common characteristics of the original forest ecosystem. Yet these areas will be affected by land reclamation, tapping, fertilization, weeding and other human disturbances at the same time. Vegetation and soil characteristic of rubber tree plantations were more complex and changeable compared with tropical rain forests and secondary forest. Therefore, it is still a complex and difficult task to fully clarify the driving factors and mechanisms of diversity and composition of the soil bacterial community in rubber plantations. Further studies are needed to link the observed changes in the structure of soil microbial communities with soil functionality, and to determine the core microbial community that would allow maintenance of at least some soil ecosystem services in a rubber plantation.

Plants change the composition of the soil community and this change must then, in turn, affect the rate of growth of the plant or population (Bever, 1994). Furthermore, the microbial community could be an indicator of soil health and quality (Schloter et al., 2003). A healthy soil will guarantee normal growth of rubber trees. Frequent human disturbance can lead to changes in or suppression of the soil bacteria community (Hossain and Sugiyama, 2011; Lin et al., 2012). In order to maintain soil microbial diversity and populations, we should strive to develop the best soil fertility management practices, and prevent soil acidification in rubber tree plantations, as well as maintain the diversity of vegetation in rubber tree plantations by minimizing the use of weeding and herbicide in management. This would help to optimize rubber tree growth and latex yield.

YZ, JL, and HW planned and designed the research; YZ performed the experiment, analyzed the data and wrote the manuscript; HW and CR revised manuscript and polish language; All authors approved the final manuscript.

The Supplementary Material for this article can be found online at: https://www.frontiersin.org/article/10.3389/fpls.2017.00849/full#supplementary-material

He, K., and Huang, Z. D. (1987). Rubber Culture in the Northern Part of the Tropical Area. Guangzhou: Guangdong Science and Technology Press.

Copyright © 2017 Zhou, Li, Ross Friedman and Wang. This is an open-access article distributed under the terms of the Creative Commons Attribution License (CC BY). The use, distribution or reproduction in other forums is permitted, provided the original author(s) or licensor are credited and that the original publication in this journal is cited, in accordance with accepted academic practice. No use, distribution or reproduction is permitted which does not comply with these terms.