Leveillula taurica, an obligate fungal plant pathogen belonging to the ascomycetes, causes powdery mildew in various vegetable crops, resulting in significant quality and yield losses. In the past few decades, the incidence of L. taurica powdery mildew has been increasing in both greenhouse- and open field-grown peppers worldwide (Damicone, 2009; Sudha and Lakshmanan, 2009; Cerkauskas et al., 2011). Premature defoliation caused by powdery mildew severely reduces crop yields and makes fruits unfavorable for marketing. Unlike most fungi that cause powdery mildew, which are epiphytic, L. taurica is an endophytic fungus, which hinders the efficacy of chemical control (Elad et al., 2007). Therefore, developing powdery mildew disease resistance in pepper is one of the main objectives of genetic and breeding programs.

In the present study, we identified and mapped a novel powdery mildew resistance locus, PMR1, to pepper chromosome 4 using two segregating populations: 102 ‘VK515' F2:3 families derived from a cross between resistant parental line ‘VK515R' and susceptible parental line ‘VK515S' and 80 ‘PM Singang' F2 lines derived from the F1 ‘PM Singang' commercial hybrid. Based on genetic analysis, the PMR1 locus was localized to 1.0 and 5.1 cM genetic intervals on lower arm of chromosome 4 in ‘VK515R' and ‘PM Singang', respectively. In addition, we performed InDel marker sequence comparisons and GBS analyses to infer the origin of PMR1. Identification of molecular markers linked to the PMR1 locus in pepper in the present study should facilitate marker-assisted selection (MAS) in pepper breeding programs aimed at introgressing the powdery mildew disease resistance trait.

For inoculum preparation, white powdery mildew spores collected from naturally-infected plants were used to inoculate the abaxial sides of leaves via the dropping method (Kim et al., 2009). Powdery mildew-infected ‘Bukang' and ‘VK515S' plants were maintained in greenhouses (Seoul National University, Suwon, Korea) and used as a source of L. taurica. At the time of sowing of ‘VK515' F2:3 families in plastic trays (50 cell trays), infectious ‘Bukang' and ‘VK515S' plants were introduced at regular intervals. In the case of the ‘PM Singang' F2 population, plants were raised in 20 cm diameter plastic pots and evaluated for resistance to powdery mildew under natural infection conditions (Korea Research Institute of Chemical Technology, Daejeon, Korea). 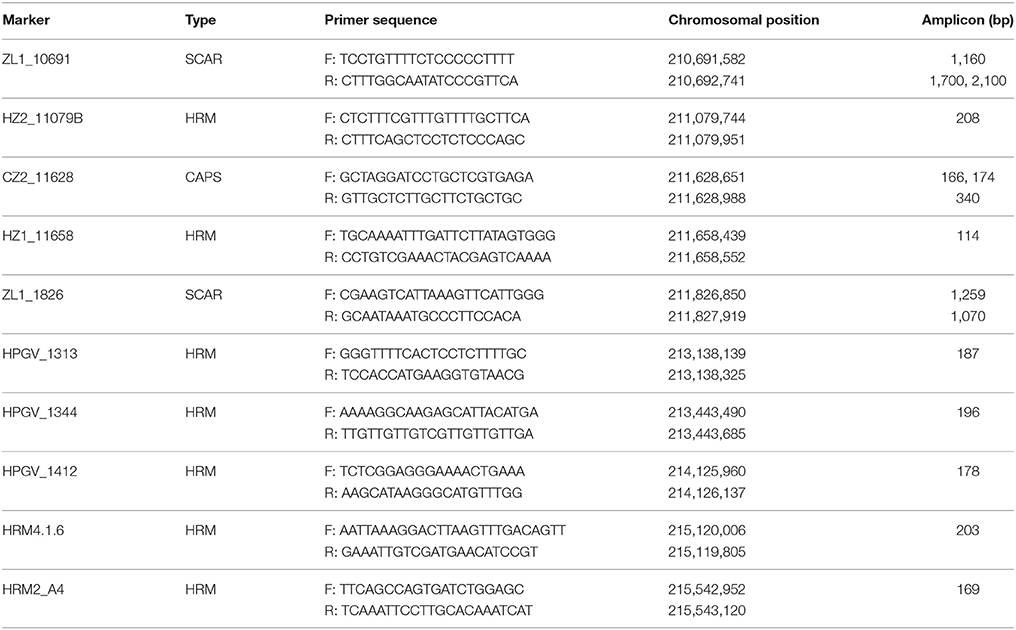 Linkage analysis was performed using CarthaGene Software (Schiex and Gaspin, 1997). To construct a linkage group, the LOD threshold was set at 5.0, and the maximum distance was set at 30 cM. Members of linkage groups were determined based on the physical positions of the markers in ‘L_Zunla-1'. Genetic distances between markers were determined in cM using the Kosambi mapping function. The resulting genetic linkage map was drawn using MapChart 2.3 software (Voorrips, 2002).

Gene predictions were performed with the FGENESH tool (Solovyev et al., 2006). The predicted protein sequences from the PMR1 region were BLASTP searched against the NCBI database for disease resistance-related genes. Protein domain analysis of the candidate resistance (R) genes from the PMR1 locus was carried out at te Pfam database (http://pfam.xfam.org/).

GBS was performed using 12 ‘VK515' F2 individuals, including 11 homozygous resistant genotypes and one heterozygous genotype, along with two replications of parents ‘VK515R' and ‘VK515S'. To construct comprehensive and representative libraries for Illumina sequencing, 400 ng of gDNA was used. Libraries for GBS were constructed as described by Truong et al. (2012). Briefly, gDNA from the parental lines (‘VK515R' and ‘VK515S') and 12 F2 lines was digested with PstI and MseI. MseI adapters and the PstI adapter with different barcodes for each sample were ligated to the digested gDNA fragments. After amplification, the quality and quantity of the libraries were evaluated using a Bioanalyzer DNA 1000 Chip (Agilent Technologies, Santa Clara, CA, USA). The same amount of adapter-ligated fragments from each sample was pooled for sequencing.

The sequence regions corresponding to the PMR1 locus from C. annuum ‘L_Zunla-1', C. chinense, and C. baccatum chromosome sequences were aligned with GBS-SNP data from the ‘VK515' genome. Phylogenetic analysis was carried out using DARwin 6.0.9 (Perrier and Jacquemoud-Collet, 2006).

We evaluated ‘VK515' F2:3 families along with resistant (‘VK515R' and ‘PM Singang') and susceptible (‘VK515S' and ‘Bukang') pepper lines infected with L. taurica for powdery mildew disease resistance 60 days after infection. Powdery mildew infection was evident by the appearance of mycelial growth on the leaf surface of susceptible controls. Powdery mildew-resistant ‘PM Singang' and ‘VK515R' failed to show disease symptoms, as no white fungal hyphae were observed on the abaxial surfaces of leaves. Similar results were obtained for ‘VK515' F1 plants, whereas susceptible ‘Bukang' and ‘VK515S' plants showed white fungal hyphae on the abaxial sides of leaves (Figure 1). Among the 102 ‘VK515' F2:3 families, 24 families (total of 451 plants) were homozygous resistant, 48 families (total of 898 plants) were segregating for this trait, and 30 families (total of 582 plants) were homozygous susceptible, which showed a good fit to a 1:2:1 ratio (χ2 = 1.06; P = 0.59) (Table 2). In the case of the ‘PM Singang' F2 population, plants displaying a disease score value of one or two were considered as resistant, whereas plants scored as three or four were considered as susceptible (Figure S1). Out of 80 ‘PM Singang' F2 lines, 59 plants were resistant and 21 plants were susceptible, which fit to a 3:1 ratio (χ2 = 0.02; P = 0.80) (Table S4). Overall, these results suggest that resistance to powdery mildew is controlled by a single dominant locus, PMR1, in these pepper populations.

Marker Development and Genetic Mapping of the PMR1 Locus 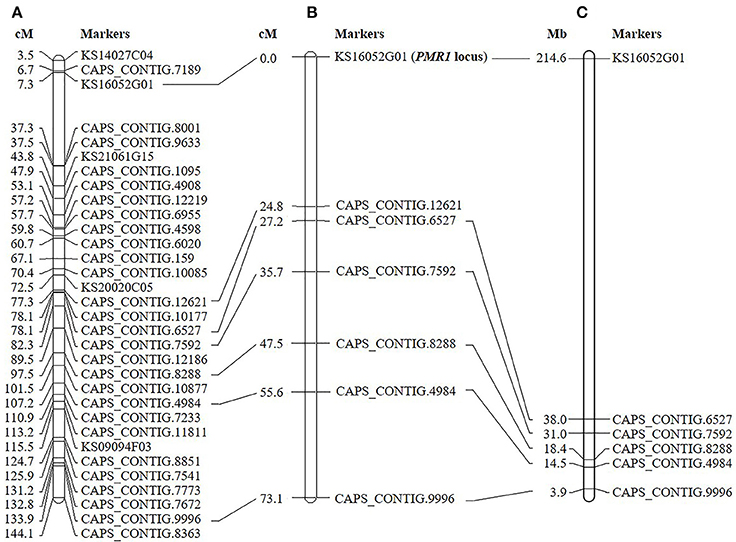 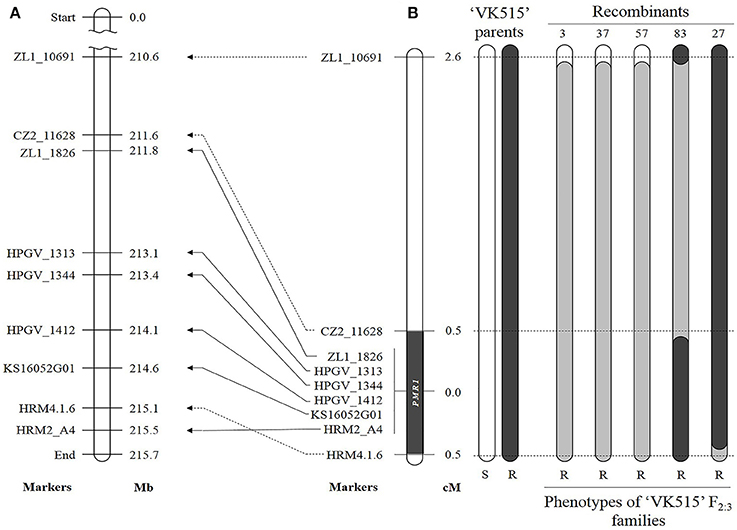 Figure 3. Comparative genetic linkage and physical maps of the powdery mildew resistance gene PMR1. (A) Physical locations of linked markers on ‘L_Zunla-1' chromosome 4. (B) Genetic map of ‘VK515' F2:3 families. Recombinant heterozygous resistant plants 3, 37, and 57; homozygous resistant plants 27 and 83. Eight SNP markers linked to the PMR1 locus are indicated next to pepper chromosome 4. Numbers on the right indicate genetic distances (cM). Black and white rectangles indicate the homozygous intervals of ‘VK515R' and ‘VK515S' chromosome 4, and gray rectangles indicate heterozygous intervals. The PMR1 locus was delimited to a 4 Mb-region between CZ2_11628 and HRM4.1.6 on ‘L_Zunla-1' chromosome 4.

Investigating the Origin of the PMR1 Locus 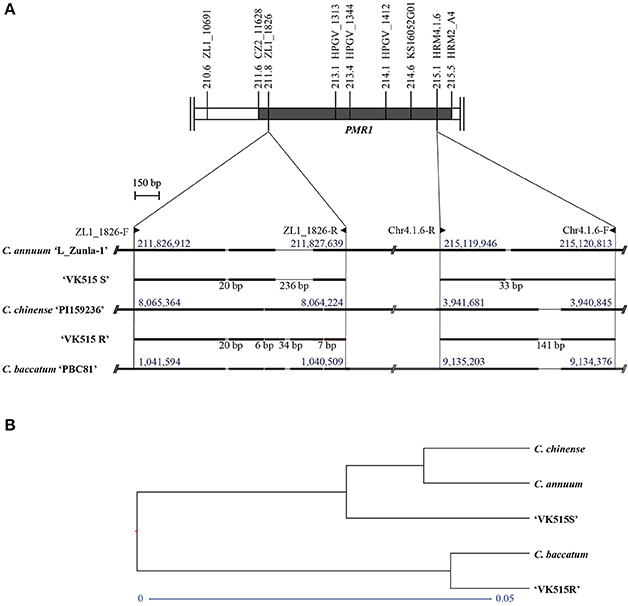 Figure 4. Sequence analysis of the PMR1 locus. (A) Schematic representation of ‘L_Zunla-1', C. chinense, and C. baccatum PMR1-specific InDels and corresponding sequences of ‘VK515' parental lines. InDel lengths in bp are shown below the solid lines. Numbers (blue font) above blocks indicate location on chromosome 4. Primer positions of the PMR1 linked markers are indicated with triangles. (B) Phylogenetic analysis of the PMR1 locus based on GBS data.

In the present study, we investigated the genetic factor responsible for powdery mildew resistance in two independent sources of powdery mildew resistance, C. annuum ‘VK515R' and ‘PM Singang'. Genetic analysis confirmed that a single dominant locus, PMR1, which mapped to chromosome 4 of the pepper genome, is responsible for the powdery mildew resistance in these cultivars. Synteny analysis between the pepper PMR1 locus and the tomato genome showed that much of the PMR1-region is syntenic with tomato chromosome 3 (Figure S5). The PMR1 locus was mapped to a syntenic region in two independent pepper populations, ‘VK515' and ‘PM Singang'. The genetic distance between the flanking markers CZ2_11628 and HRM4.1.6 in ‘VK515' F2:3 families and HZ2_11079B and HRM2_A4 in the ‘PM Singang' population were 1.0 and 5.1 cM with total map distances of 3.1 and 8.9 cM, respectively. The difference in genetic distance between the ‘VK515' and ‘PM Singang' populations is likely due to the difference in the size and nature of the genetic populations (having 102 F2:3 families vs. 80 F2 individuals).

The flanking markers CZ2_11628 and HRM4.1.6 delimited the PMR1 locus in ‘VK515R' to an interval of 1.0 cM corresponding to a DNA fragment of an approximately 4-Mb region in the lower arm of ‘L_Zunla-1' chromosome 4. Suppressed recombination and segregation distortion are two common problems in populations segregating for alien introgressions, which can affect genetic mapping and linkage analyses (Chetelat et al., 2000; Neu et al., 2002; Pertuzé et al., 2003; Canady et al., 2006; Nagy et al., 2010). Consistent with this notion, the present analysis, which is based on genotyping as well as GBS analysis, indicated suppressed recombination between markers CZ2_11628 and HRM4.1.6, each spanning a genetic distance of 0.5 cM from the PMR1 locus, which might have been introgressed from a wild Capsicum species. In accordance with this possible introgression, phylogenetic analysis of the GBS data from the PMR1 locus showed that ‘VK515R' shared a common node with C. baccatum. Similar results were obtained with phylogenetic analysis of the PMR1 locus-specific InDel marker sequences (data not shown). These results further substantiate the idea that the PMR1 locus might have been introgressed from C. baccatum. Nevertheless, a possible role of chromosomal rearrangements in the suppressed recombination at the PMR1 region cannot be ruled out (Neu et al., 2002).

In summary, phenotypic and genetic analysis of powdery mildew resistance in pepper cultivars, VK515R and PM Singang identified a single dominant locus for powdery mildew resistance. We mapped the PMR1 locus to 1.0 and 5.1 cM intervals on chromosome 4 of ‘VK515R' and ‘PM Singang'. Six and three molecular markers co-segregating with the powdery mildew resistance were identified from ‘VK515R' and ‘PM Singang', respectively. The molecular markers that we developed in this study will be especially useful for MAS and pyramiding of powdery mildew-resistance genes into elite cultivars, as they are tightly linked to the PMR1 locus, and efficient SNP marker detection platforms are currently available. Further fine mapping and candidate gene analyses are needed to uncover the relationship between the predicted receptor kinase/NBS-LRR genes and PMR1.

The Supplementary Material for this article can be found online at: https://www.frontiersin.org/article/10.3389/fpls.2017.02090/full#supplementary-material

Anand, N., Deshpande, A. A., and Sridhar, T. S. (1987). Resistance to powdery mildew in an accession of Capsicum frutescens and its inheritance pattern. Capsicum Eggplant Newsl. 6, 77–78.

Pochard, E., Palloix, A., and Daubèze, A. M. (1986). “The use of androgenetic autodiploid lines for the analysis of complex resistance systems in the pepper,” in VIth Eucarpia Meeting on Genetics and Breeding on Capsicum and Eggplant (Saragossa), 105–109.

Copyright © 2017 Jo, Venkatesh, Han, Lee, Choi, Lee, Choi and Kang. This is an open-access article distributed under the terms of the Creative Commons Attribution License (CC BY). The use, distribution or reproduction in other forums is permitted, provided the original author(s) or licensor are credited and that the original publication in this journal is cited, in accordance with accepted academic practice. No use, distribution or reproduction is permitted which does not comply with these terms.