Objectives of this study were to determine effects of legume abundance on soil water, N input and soil nutrient availability, and their subsequent influences on green and senesced shoot biomass, nutrients and nutrient resorption of a typical Eurasian steppe species. Differences between leaf and stem in nutrients and nutrient resorption were also characterized. We hypothesized that: (a) increasing legume abundance enhances shoot N concentration and reduces shoot N resorption efficiency, due to an increase in N2 fixation and soil N availability; (b) increasing legume abundance reduces shoot P concentration and increases shoot P resorption efficiency, due to decreased soil P availability.

The study was conducted at the Changling Grassland Farming Research Station (E123°31′, N44°33′; Elevation 145 m), located at the eastern edge of the Eurasian steppe. At this site, mean annual temperature is 4.9°C and average growing season is ∼150 days. During 2000–2010, annual precipitation was 364 mm at this site (70–80% from June to September). Soil type is meadow chernozem soil. Mature vegetation is meadow steppe dominated by Leymus chinensis, a widely distributed perennial C3 grass in Eurasian steppe. The current experiment was conducted in a section of meadow that had been converted to cropland and subsequently abandoned. At the start of this experiment, means were: soil pH 8.1, bulk density 1.48 g cm-3, organic matter concentration 16 g kg-1 and total N concentration 1.1 g kg-1.

Experimental grasslands were established in 2006, using a completely randomized block design with four replicates. There were four 3 m × 3 m plots in each block. L. chinensis monoculture [no legume (N-L)], 75% L. chinensis + 25% Medicago sativa mixture [low legume abundance (Low-L)], 50% L. chinensis + 50% M. sativa mixture [medium legume abundance (Mid-L)], and 25% L. chinensis + 75% M. sativa mixture [high legume abundance (High-L)] were randomly assigned to plots within each block. In detail, in July 2006, L. chinensis and M. sativa seeds were mixed according to treatments and uniformly sown into plots with 15-cm row spaces. For each plot, total plant density was 600 plant individuals m-2, representative of mean plant density in natural meadow communities in this region. Prior to sowing, germination potential of L. chinensis and M. sativa seeds were assessed and all M. sativa seeds were exposed to 98% H2SO4 for 15 min to break the hard seed coat. No inoculation was applied when legume seeds were sown, as the site had a history of legume presence and in a previous study (Li et al., 2015), soil contained sufficient rhizobia to induce root nodulation. To promote seedling emergence, during the month after sowing, plots were irrigated if there was no rainfall for four consecutive days. In August 2006, all plots were thinned to designated plant densities. To promote establishment of L. chinensis and M. sativa, other plant species were limited by weeding in 2006 and 2007. After 2007, no weeding was done, as there were limited weeds present, with negligible impact on growth of L. chinensis and M. sativa. Only initial proportions of plant species were controlled.

On 2 September, 2010, when grasses were fully matured and before the onset of senescence, a 1 m × 1 m quadrant was designated in the center of each plot for collecting plant samples. Plants within each quadrant were identified according to species, counted and shoot material for each species separately clipped at the soil surface and taken to the laboratory. In each quadrant, 20 mature shoots of L. chinensis with similar height were selected, two mature and intact green leaves (without sheath, usually the third and fourth leaves from the top of the shoot) and basal stem (with sheath, 0–5 cm from the bottom of the shoot) were collected on each of these 20 shoots, and then aggregated by organ for measuring biomass and [N, P] concentrations and [N, P] resorption efficiencies. Remaining leaf and stem materials for those 20 shoots of L. chinensis were collected to determine biomass and [N, P] concentrations. Within each quadrant, remaining intact L. chinensis and M. sativa shoots (whole plant with leaf and stem) were retained to determine biomass and N concentration of M. sativa shoots and 15N isotope of L. chinensis and M. sativa shoots. Plant samples were oven-dried at 65°C for 48 h and dry weights determined. Plant materials were finely ground and sieved. Total N concentration was determined with a Kjeldahl method (Sparks et al., 1996), total P concentration determined by persulfate oxidation followed by colorimetric analysis (Lü et al., 2013), and 15N natural abundance analyzed using a continuous flow Isotope Ratio Mass Spectrometer (Stable Isotope Facility, University of California, Davis, Davis, CA, United States). In mid-October, when plants were completely senesced, a new 1 m × 1 m quadrant was designated and 20 shoots of L. chinensis were selected, similar in height to shoots selected on 2 September. Senesced leaf and stem samples were collected and analyzed as described above for green shoots.

Two-way ANOVA was used to determine main and interactive effects of block and legume abundance on soil properties, symbiotic N fixation, and biomass, nutrients, and nutrient resorption for each shoot tissue. Based on preliminary analyses, effects of block and interactive effects of block and legume abundance on these measured variables were not significant (P > 0.05). Paired Student’s t-tests were used to detect differences between leaf and stem for biomass, nutrients and nutrient resorption. Simple linear regressions were performed to analyze relationships between soil water content and %Nsymfix of M. sativa. The control power of soil water content, soil [N, P] availability and soil available N:P to organ biomass, nutrient concentrations, and nutrient resorption efficiency were examined by multiple stepwise regressions. Means were compared with a Duncan’s test. Significance for all statistical tests was defined as P = 0.05. All data were analyzed using SPSS17.0 software (Chicago, IL, United States). 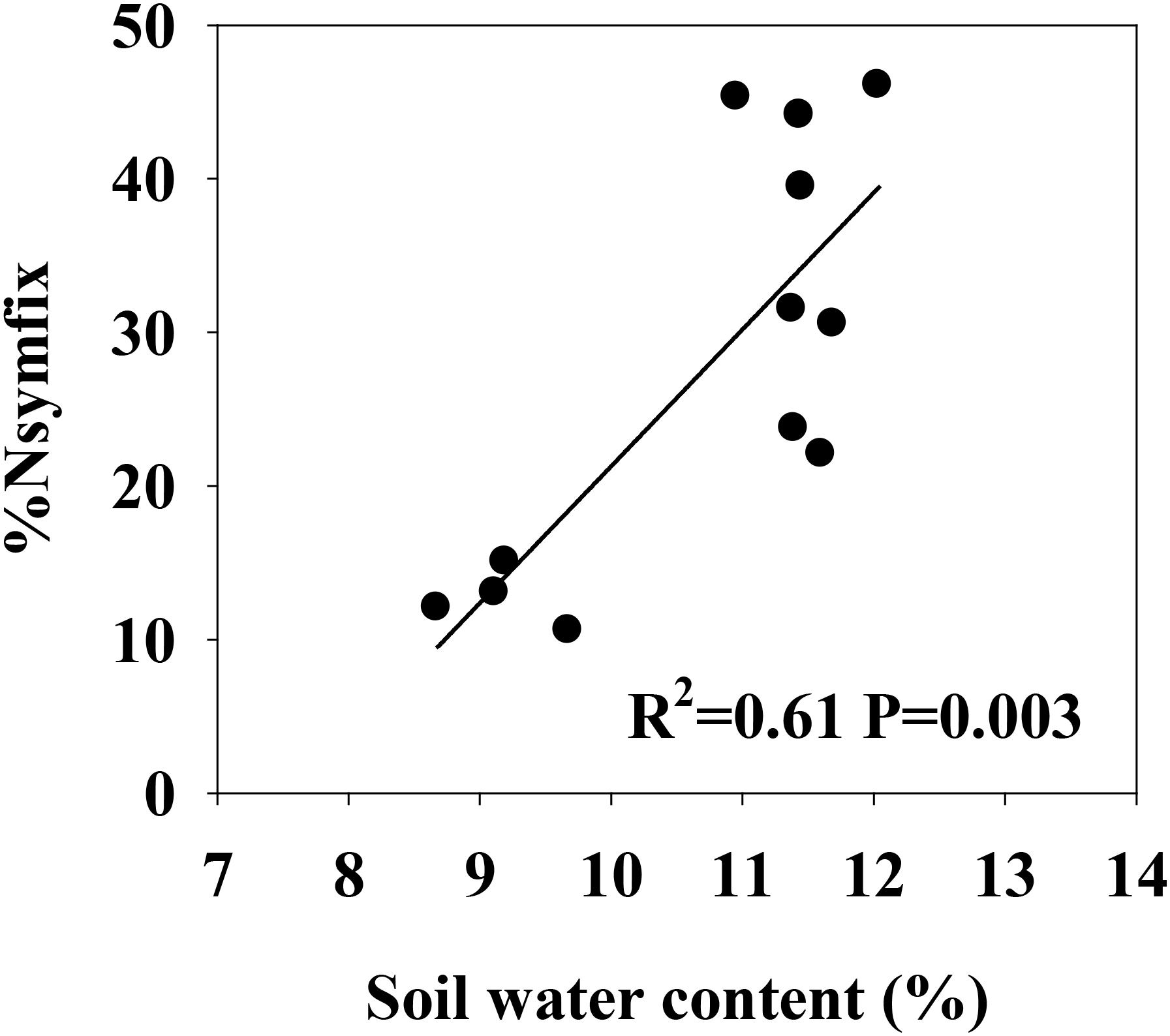 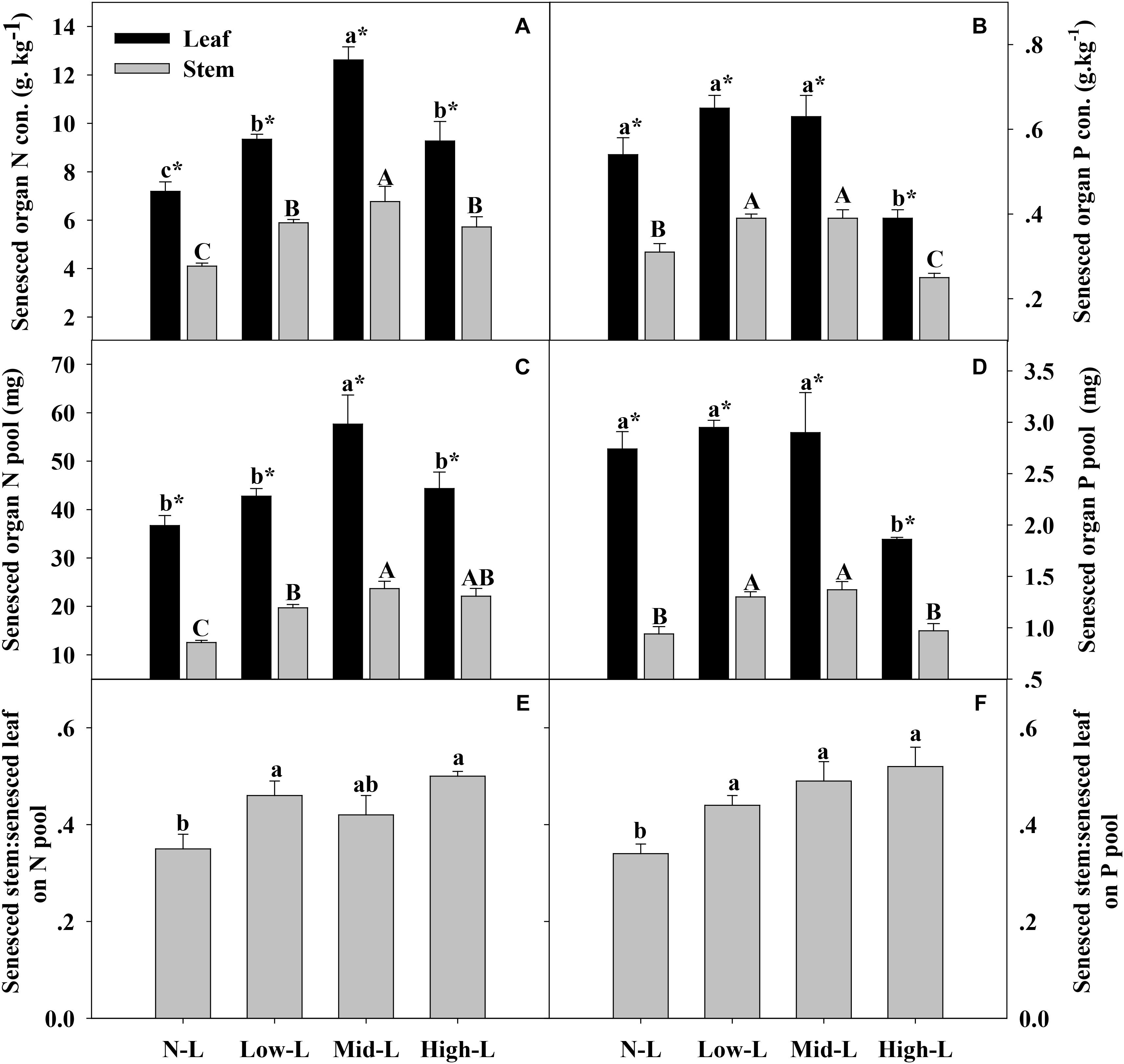 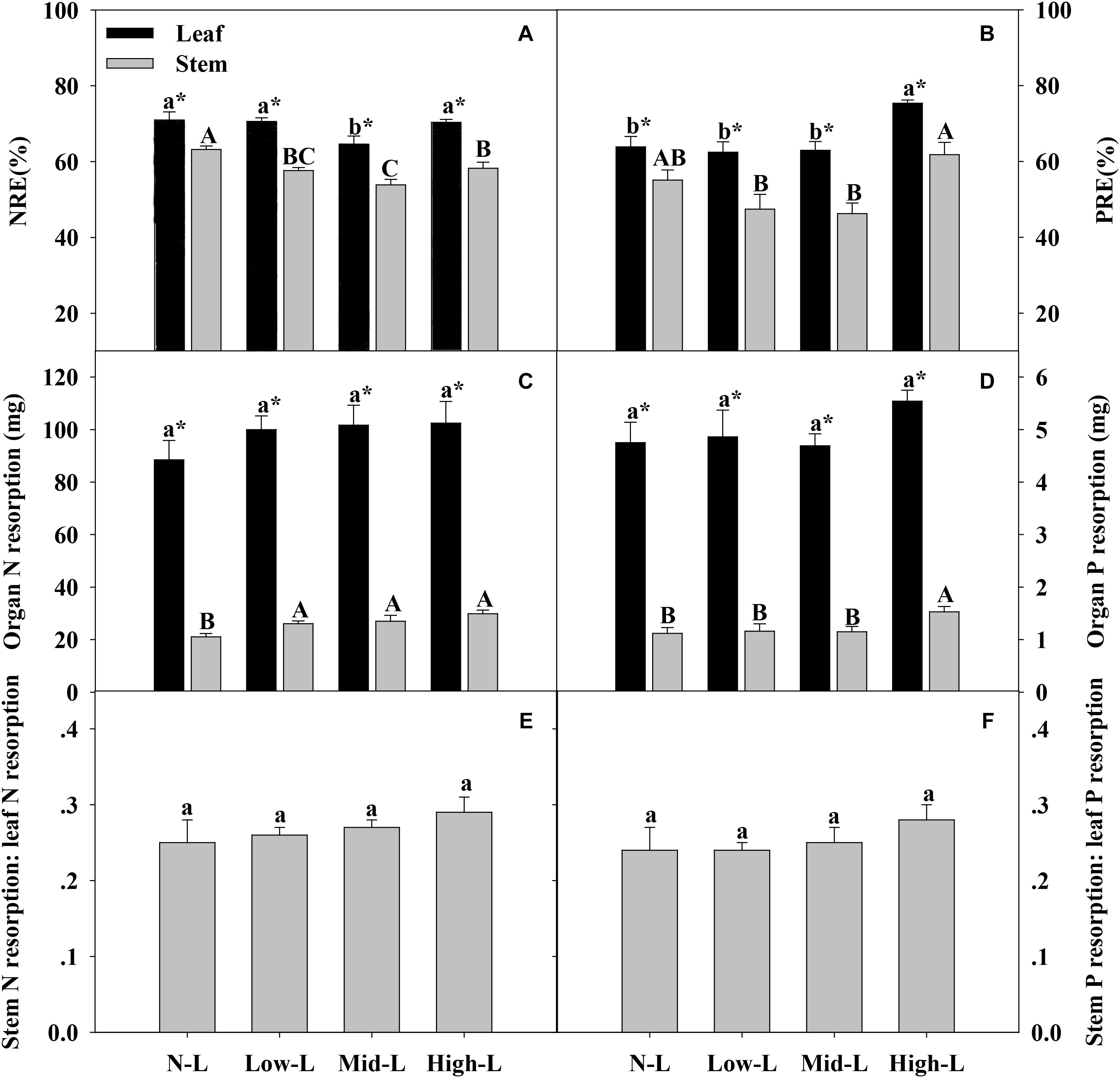 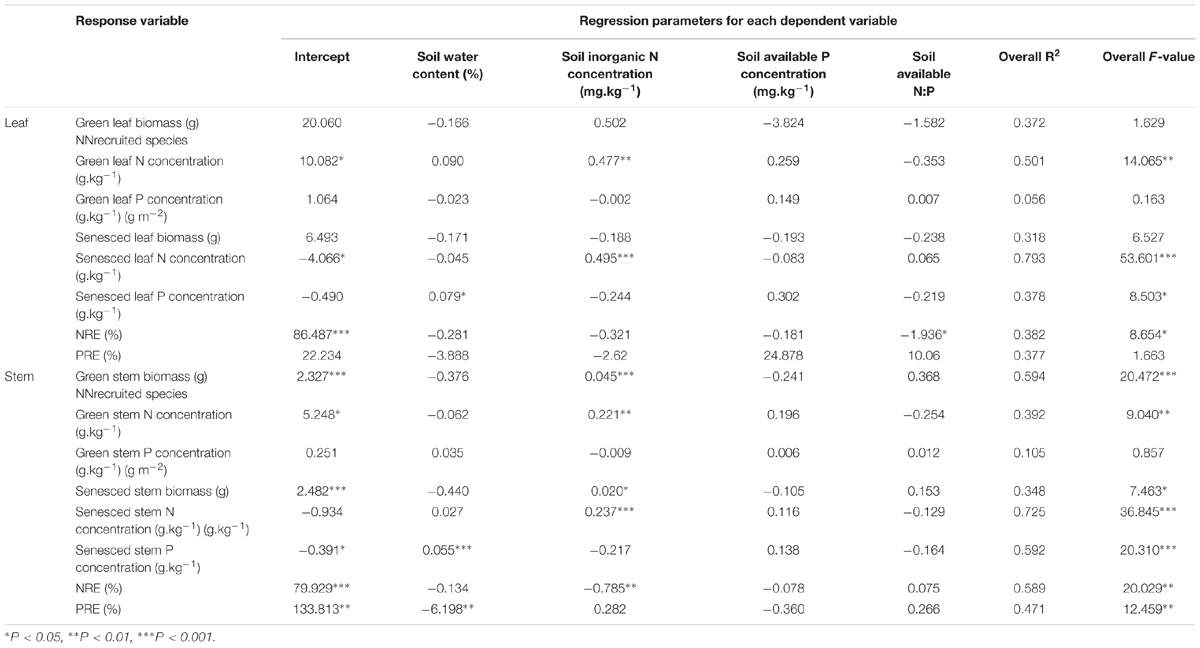 Stem Was an Important Component to Drive Nutrient Utilization and Return of L. chinensis

We gratefully acknowledge the efforts of editors and reviewers for peer-reviewing this manuscript.

Copyright © 2018 Li, Chen and Zhou. This is an open-access article distributed under the terms of the Creative Commons Attribution License (CC BY). The use, distribution or reproduction in other forums is permitted, provided the original author(s) and the copyright owner(s) are credited and that the original publication in this journal is cited, in accordance with accepted academic practice. No use, distribution or reproduction is permitted which does not comply with these terms.