Wheat (Triticum aestivum L.) is one of the most important crops in the world, which counts about 35% of the staple food for the world’s population (Paux et al., 2008). The problem of potassium (K+) deficiency in agriculture has a remarkably wide reach, affecting crops around the world, including wheat (Ruan et al., 2015). Studies on K+ concentration in the soil have revealed that as much as 75% of paddy soils are K+ deficient in China and that in Southern Australia is 67% (Rengel and Damon, 2008; Ruan et al., 2015). Generally, soil K+ levels are found below 0.3 mM in these fields (Ruan et al., 2015). Given the prevalence of agricultural plots across the world with a K+ deficiency problem, more research should be conducted for developing strategies to address this issue.

K+ is a crucial nutrient in many plant processes including photosynthesis, osmoregulation, and enzyme activations in many metabolic pathways (Maathuis, 2009). K+ regulates enzymes both transcriptionally and post-transcriptionally (Maathuis, 2009). It plays important roles in plant growth and development making it a point of interest to maximize crop yield (Pettigrew, 2008). Research has shown that the deficiency of K+ in plants is a form of abiotic stress that triggers a variety of responses resulting in reduced growth and productivity (Hafsi et al., 2014). Plant coping strategies such as morphological and physiological modifications and regulation of K+ transport systems exist; however, molecular mechanisms of adaption to K+ deficiency have not been fully understood (Hafsi et al., 2014). By further investigating the effects of K+ deficiency on plants and identifying the mechanisms involved in driving the observed changes, crop yields and quality can be maximized.

Root morphology change is one of the vital plant responses to K+ efficiency, manifesting commonly as root growth retardation (Hermans et al., 2006; Jordan-Meille et al., 2018). However, the impact varies among different plant species, genotypes, the degree and duration of the deficiency, and culturing conditions. In rice, a resistant genotype presented as a higher abundance of ﬁne roots within the root system under K+ deprivation (Jia et al., 2008; Jordan-Meille et al., 2018). In Arabidopsis thaliana, the number and length of the ﬁrst order lateral roots were decreased, while the number of the second order laterals was increased in K+ depleted plants (Kellermeier et al., 2014). Additionally, the elongation of the main roots was inhibited (Shin and Schachtman, 2004; Jung et al., 2009; Kim et al., 2010; Kellermeier et al., 2013). In cotton, K+ deficiency inhibited lateral root formation and elongation, and retarded main root growth after 4 DAT of the treatment (Zhang et al., 2009). Although it is well studied that K+ deficiency induced aberrant growth and development of plant and altered the expression of protein-coding genes, more systematic investigations on root development under K+ deficiency and the underlying molecular mechanisms are needed.

MicroRNAs (miRNAs) are small regulatory RNA molecules that bind to target mRNA sequences and form a mRNA-induced gene silencing complex (RISC) (Li and Zhang, 2016). They are a class of small non-coding RNAs responsible for regulating target genes in many metabolic and developmental processes (Li and Zhang, 2016; Jaubert-Possamai et al., 2019). miRNAs are approximately 20–22 nucleotides in length and are processed by Dicer-like 1 (DCL1) enzyme from precursor sequences (pre-miRNAs) in plants. miRNAs are highly evolutionarily conserved from species to species (Zhang et al., 2006); many miRNAs are involved in the regulation of plant response to abiotic and biotic stresses (Zhang, 2015; Jaubert-Possamai et al., 2019). Gene expression is inhibited by miRNAs in two ways: either by the targeted degradation of mRNA molecules or by inhibition of protein translation. Research identifying new miRNAs and determining their functions is growing rapidly in a multitude of plant species (Zhang and Wang, 2015). There are many reports on the role of miRNAs in plant root growth and development (Khan et al., 2011; Couzigou and Combier, 2016; Zhang and Unver, 2018). Several miRNAs were found to regulate root structure change induced by phosphorus or nitrogen deficiency (Nguyen et al., 2015). However, the study of miRNA expression during root development change under K+ deficiency condition is rare, if any. In this study, we not only studied the impact of K+ deficiency on wheat seedling growth and development but also systematically studied the effect of K+ deficiency on wheat root development and morphology. Our results show consistent findings with other studies in that K+ deficiency affected wheat seedling growth and development. We also found that although K+ deficiency did not affect root vitality, it affected root development, including root branching, root area, and root size. Importantly, we found that K+ deficiency altered the expression of miRNAs and their targets; the majority of gene targets regulated by miRNAs are related to root development. Manipulating the expression of these miRNAs and their targets may become a new strategy to increase plant biomass and yield under potassium K+ condition and enhance the fertilizer efficiency.

At 4 DAT and 8 DAT of K+ treatment, the plant morphology was observed, and the number of roots was accounted. After that, the whole plants and each part of the plants were scanned by using an EPSON Scanner, and pictures were taken. The software WinRHIZO was employed to analyze the root length, root area, root volume, and root dimeter. The length of the seminal roots and the length of roots that had not branched roots were also measured.

After pictures were taken and morphological characteristics were recorded, both up-ground shoots and under-ground roots were placed in an oven with 80°C for drying. After 4 days of drying, the dry mass was measured and calculated.

After 4 DAT and 8 DAT of K+ treatment, six wheat seedings were randomly selected from the K+ deficiency treatment and the controls, respectively. The middle 2 cm of the first fully opened leaf and root section (5–7 cm from the stem) was cut and weighted. Then, the samples were placed into the incubator chamber of the Clark Chlorolab2 system followed by adding 2 ml saturated CaSO4 solution. The Clark Chlorolab2 was employed to measure the consumption of O2 for 10 min. The consumption rate of O2 was calculated. Six biological replicates were measured for each tissue of each treatment at each time point.

Root vigor was measured by using the TTC method. Briefly, roots of each plant were weighted and cut into small fragments of ~1 cm in length followed by soaking in 0.6% TTC solution prepared by using 0.1 M phosphate buffer solution (PBS). After 24 h of dyeing by TTC, the root samples were washed three times with ddH2O. Finally, the stained roots were soaked in 95% ethanol for 10 min at an 85°C water bath to extract triphenylformamidine (TTF). Root vigor was measured using a spectrophotometer at 485 nm. The OD value was recorded. Six biological replicates were performed for each treatment at each time point.

After 4 DAT and 8 DAT of K+ treatment, the first fully-opened leaf was selected from each treatment and the control plant. The whole leaves were broken in a mortar with a small amount of CaCO3 and 2 ml acetone. Then, broken leaves were transferred into a 15 ml centrifuge tube. The leaf residue on the mortar was rinsed off using 3 ml acetone and then transferred into the centrifuge tube. The centrifuge tubes were centrifuged for 10 min at 10,000g. After adding acetone to the total of 5 ml, the chlorophyll content was measured using a spectrophotometer at wavelength of 663 and 645 nm. Six biological replicates were measured for each treatment at each time point.

Total RNAs were extracted using the MirVana miRNA Isolation Kit according to the manufacturer’s protocol. Briefly, after 4 and 8 DAT of treatment, root samples from the K+ deficiency treatment group and the control group were collected and immediately frozen in liquid nitrogen and then stored at −80°C until RNA extraction. About 200 mg of frozen root samples was used to extract total RNAs from each sample. Three biological replicates were performed for each treatment and the controls. Extracted RNAs were quantified, and the quality was tested using a Nanodrop ND-1000 (Nanodrop Technologies, Wilmington, DE). Extracted RNA was stored at −80°C until further analysis.

Gene expression analysis of miRNAs and their targeted genes was performed by qRT-PCR following the manufacturer’s protocol as outlined in the TianGen miRcute Plus miRNA qPCR Detection Kit. The previously synthesized cDNA was amplified and quantified to determine the expression levels. The 50× ROX Control Dye and 50×ROX Reference Dye were used along with SYBR Green to facilitate the measurement of the expression levels. Expression levels were normalized against the reference gene EF1A. Fold change was calculated using the ΔΔCT method. Three biological and three technical replicates were run for each gene and miRNA.

Table 1 Effect of K+ deficiency on plant biomass of wheat seedlings and shoot area at 4/8 days after transfer day (DAT)*.

Table 4 Effect of K+ deficiency on chlorophyll at 4/8 days after transfer day (DAT)*.

Expression Analysis of miRNAs and Their Target Genes

All 20 tested miRNAs and nine targets were expressed in wheat seedling under the normal culture condition. Among the 20 miRNAs, miR160 was the highest expressed followed by miR164, miR172, miR319, and miR156. Except miR393 and miR167, all other miRNAs were highly expressed compared with the reference gene. All nine miRNA target genes were also expressed with different levels; among them, HD ZiP was the highest expressed followed by GRF1 transcription factor gene. Compared with the reference gene and other tested genes, the expression level of bHLH transcription factor gene was relatively low (data not shown).

K+ Deficiency Induced Aberrant Expression of miRNAs and Their Targets 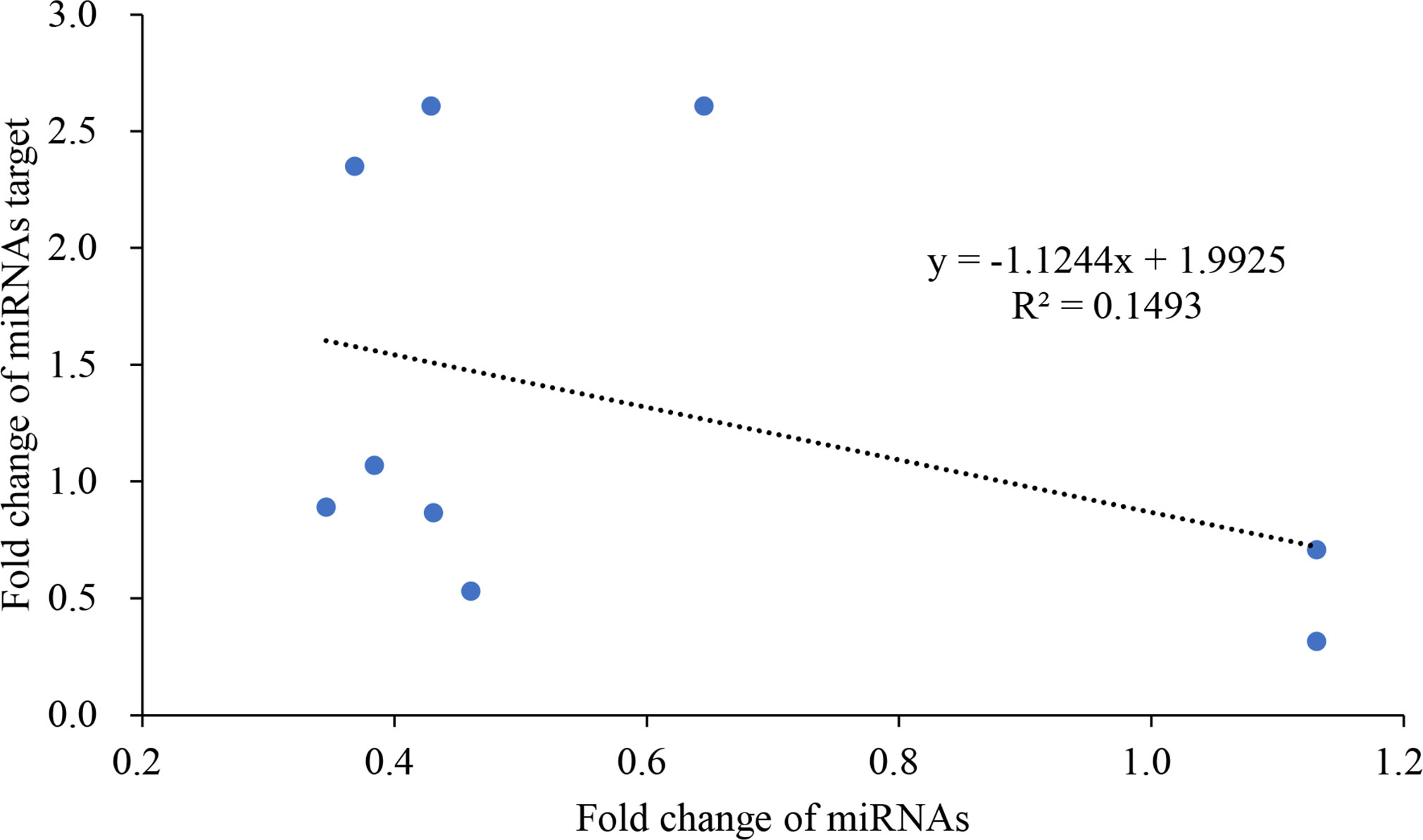 Figure 4 The reverse linear relationship of fold change between miRNAs and their targets.

ARF genes have been shown to play key roles in plant development in many plant species, including Arabidopsis. According to previous studies, the ARF family genes are targets of several miRNAs, including miR160, miR167 (Wu et al., 2006), and miR390 (Xia et al., 2017). miR160 is an important root development regulator that has been found expressed at high levels in cotton (Pan et al., 2019). miR160 has also been documented to inhibit ARF-10, ARF-16, and ARF-17 genes, and to regulate itself by endogenous target mimics (Lin et al., 2015). The miR167 was found to regulate the expression of ARF6 and ARF8 in Arabidopsis (Wu et al., 2006). The miR390 does not directly target or bind to ARF family genes, but has been shown to act as a regulatory factor by targeting TAS3, resulting in the production of trans-acting small interfering RNAs (tasiRNA) (Xia et al., 2017). These tasiRNAs then target ARF genes, acting to suppress them (Xia et al., 2017). The HD-ZIP family of genes have been shown to be targets of both miR165 and miR166. This study shows that K+ deficiency affected the expression of ARF transcription factor genes and their corresponding miRNAs.

All datasets presented in this study are included in the article.

Copyright © 2020 Thornburg, Liu, Li, Xue, Wang, Li, Fontana, Davis, Liu, Zhang, Zhang, Liu and Pan. This is an open-access article distributed under the terms of the Creative Commons Attribution License (CC BY). The use, distribution or reproduction in other forums is permitted, provided the original author(s) and the copyright owner(s) are credited and that the original publication in this journal is cited, in accordance with accepted academic practice. No use, distribution or reproduction is permitted which does not comply with these terms.