Machine vision technology has been applied to multiple fields (John, 2017; Mauro et al., 2018; Wang et al., 2018; Kim et al., 2020). For the detection of seedling growth status, an early method could be found in Ling and Ruzhitsky (1996), which could measure tomato seedling canopy with an adaptive threshold algorithm and the Otsu method. Lin et al. estimated the leaf area of seedlings by the projected contour image and proposed an image processing method based on elliptic Hough transform to determine the overlapping position of seedlings leaves (Lin et al., 2002). A model for estimating seedling leaf area was developed using vision technology in Karimi (2009), where the model used the linear regression equation of leaf length and width obtained by a vision to estimate the leaf area. Tong et al. combined the region center of cross-border leaves with the improved watershed segmentation method to measure the leaf area and then estimated the quality of vegetable seedlings through the leaf area (Tong et al., 2013). A linear structured light vision system was designed to measure seedling surface information as described in Feng et al. (2013). In the system, one color image of the seedling line with linear structured light was used to measure the seedling height, and the other color image of the seedling line without linear structured light was used to identify the size of the seedling leaf, a color index of 2G-R-B was used to distinguish the seedling leaf from the substrate, and the Otsu dynamic threshold was adopted to extract the leaf area. Ashraf et al. (2014) used the theory of machine vision to inspect seedlings for sorting and inspecting grafted seedlings. An automated corn seedling phenotyping platform based on a time-of-flight (TOF) camera and an industrial robot arm was developed by Hang et al. (2017). Their method used the TOF camera to obtain the data of three-dimensional (3D) point cloud of seedlings, then used a 3D-to-2D projection and an x-axis pixel density distribution algorithm to segment and match the corn seedlings (Hang et al., 2017). A comprehensive image processing flow, which used discontinuous gray to segment the leaf area of seedling, applied an order statistic filtering to reduce the random noise and utilized the Otsu algorithm to segment the seedling image, was presented to extract the feature information of graft seedlings in Zhang et al. (2015). Franck et al. proposed a fast 3D reconstruction method for seedling phenotyping and measured the seedling surface features by using the developed computer vision technology (Golbach et al., 2016). A method based on the photometric stereo for measuring the seedling leaf morphology was reported in Feng et al. (2018). Yang et al. combined filtering and clustering segmentation algorithms to process the 3D point cloud data of overhead view of seedling using the imaging principle of RGB-D camera (Yang et al., 2019).

The image of tray seedlings was obtained by a charge-coupled device (CCD) camera with a resolution of 1,280 * 960 (model MV-VD120SC, supplied by Micro-vision company, Xi'an in China). The distance between the camera and the conveyor belt is 700 mm. The CCD camera is connected to a personal computer (PC) by a cable with one USB3.0 interface. The images of tray seedlings obtained by the CCD camera were stored in the PC, which has 8 GB RAM, an Intel Core i5-4590 CPU, and a Windows 7 operating system. The software system of the image processing system running on the PC is OpenCV 3.0 and Matlab 8.3. The transplanting unit, including a gantry and an end-effector, is mainly to carry out the sorting operation of potted seedlings. A manipulator moves on a gantry according to the seedling information, and an end-effector equipped at the end of the manipulator is applied to grasp the target seedling. The actions of the gantry and the manipulator are controlled by a programmable logic controller (PLC). 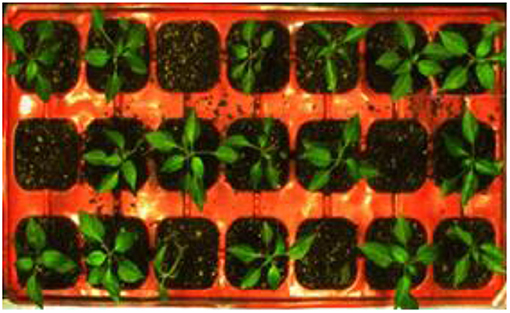 The surface color of the potted seedlings is an important factor to reflect its growth status; however, the acquired image of potted seedling includes noises due to various external interferences. There are different objects in the image of tray seedlings, which will increase the difficulty of identifying healthy seedlings.

Two-color indexes are proposed as shown in Equations (1) and (2) to calculate the color differences of all pixels in the images so that the green and red color components can be enhanced, and the rest of the components can be weakened in the seedling image.

To investigate the surface information of seedlings more comprehensively, an index of the grayscale image preprocessing is proposed as shown in Equation (3).

where Y is the gray value of the pixel in the grayscale image and R, G, and B are color components of the pixels in the RGB color space of the original image. Thus, the image preprocessing of potted seedlings is finished to prepare for the subsequent image segmentation.

Segmentation and Denoising of Seedling Image

After the image preprocessing, an image segmentation algorithm is proposed using an optimal thresholding method based on the genetic algorithm. The algorithm flow is shown in Figure 3. 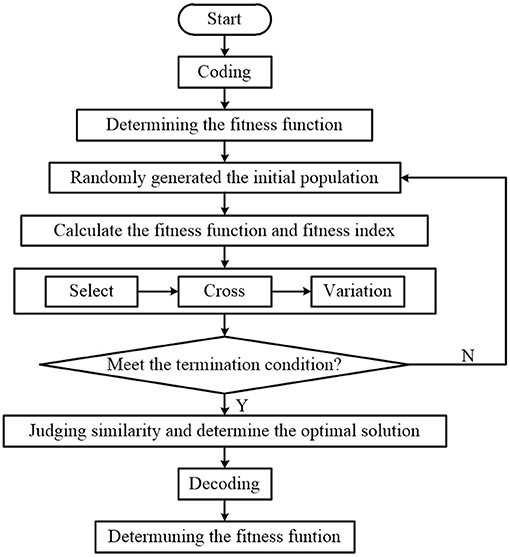 In the encoding, the grayscale image is binary coded to produce a 16-bit binary number. The first eight bits represent the segmentation threshold T1, and the remaining eight bits represent the segmentation threshold T2. The number of seedlings affects the fitness calculation of each generation. The initial generation quantity should be set reasonably. After a lot of simulation, the number of pepper seedlings is set to 21, and the maximum number of breeding algebras is set to 100.

• Decoding: The binary array generated by the encoding is decoded and converted to a value between 0 and 255 for the fitness value.

• Variation: mutation is performed through simple mutation, and the mutation probability is set to 0.03.

• Termination criteria: when the algorithm performs to a predetermined algebra or the highest fitness value in the population is stable, the algorithm will end the operation.

A binary map of tray seedlings is generated by using Equation (5).

where and represent two thresholds obtained after the optimal threshold segmentation of the genetic algorithm 1 represents a seedling pixel, and 0 represents a background pixel. Then, the three-dimensional block-matching algorithm (BM3D) is applied to denoise the tray seedling image.

We use I to represent the image with noise and P to represent any matching block that has been divided. Set the block size of P to be K × K, and use Q to represent a sliding window block in the search process. When the size of the block is known, the pixel in the upper left corner of the image is used to represent the matching block. In the process of block matching, the appropriate step size “h” was first determined. The block is divided and searched according to the order from left to right and from top to bottom. The current block P is selected as the reference block, and the center point of P is considered as the reference point.

where X is the matrix value of the matching block. Finally, the matrix block sets in order are arranged in order of magnitude. A 3D matrix of size K × K × S(P) is obtained. Then, the process of denoising in the 3D transform domain can be expressed by using the following equation:

where N3D represents that TS(P) makes 3D unitary transformation, and the arithmetic symbol is N3D. γ can be expressed as follows:

After calculating the basic estimation value of the 3D transform domain filtered by Equation (10), the final estimated weight can be obtained as shown in Equation (11).

The leaf area “M” of the seedling is a visual representation of the seedling growth status. After segmenting the seedling image, a smart identification framework of healthy vegetable seedlings (SIHVS) is implemented for calculating the leaf area of each seedling. The SIHVS algorithm counts the number of pixels of the seedling leaf. The actual area of the seedling leaf can be obtained by proportional conversion with the leaf pixels. The regionprops function in MATLAB is used to calculate the area of each white region in the binary image. The parameter bws of the function regionprops calculates the number of pixels occupied by the white region in each region and could assign the calculating results to props. Then, the actual leaf area of each seedling is converted according to the relationship between the tray size and the pixels as shown in Equation (12). 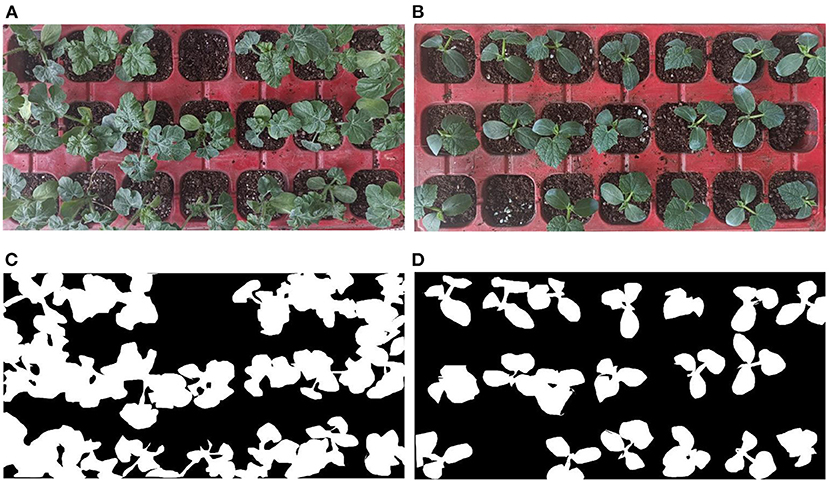 Figure 8. Identification results based on the proposed method.

Figure 9. Identification results based on the method in Tong et al. (2013).

Figure 10. Output ordinates based on the proposed method.

It can be seen from the Figures 5, 6 that the proposed method removed the noise effectively and filled the holes on the leaf surface, which also implied that the proposed method was robust against the varied illumination because this experiment was not conducted under the structured light environment. The threshold “F” obtained by a lot of experimental analysis could clearly distinguish seedlings of different quality. Although the “F” value of the empty tray cell should be 0 in theory, a lot of experiments showed that the value of the tray empty cell was below 0.015. By setting different thresholds “F,” different quality seedlings can be accurately distinguished, which can be shown in Figure 7. It can be seen that Figure 7 is all the correct identification results of Figure 4. The proposed method is superior to the comparison method in the identification of healthy seedlings and sub-healthy seedlings, which implies the algorithm can segment and restore seedling leaves effectively. The SIHVS algorithm can use the threshold “F” to count the surface pixels of seedling leaves in detail. The average value, Fa, is 0.20, the maximum value, Fmax, is 0.25, the minimum value, Fmin is 0.16, and 0.015 can be set to distinguish the healthy seedlings, sub-healthy seedlings, seedlings of poor quality, and empty tray cells well, which can be confirmed in Tables 2, 3. The proposed method can give a good identification rate of healthy seedlings that is 94.33% and output the coordinates of healthy seedlings for the preparation of transplanting.

This project was supported by the National Natural Science Foundation of China (No. 51875175), the National Key Research and Development Program of China Project (No. 2017YFDO700801) Intelligent Manufacturing Comprehensive Standardization Project (No. 2018GXZ1101011), the Innovation Scientists and Technicians Talent Projects of Henan Provincial Department of Education (No. 19HASTIT021), and Yongchuan Natural Science Foundation Project (Grant No. Xcstc. 2019nb0802).

Copyright © 2021 Jin, Wang, Chen, Ji, Liu and Wang. This is an open-access article distributed under the terms of the Creative Commons Attribution License (CC BY). The use, distribution or reproduction in other forums is permitted, provided the original author(s) and the copyright owner(s) are credited and that the original publication in this journal is cited, in accordance with accepted academic practice. No use, distribution or reproduction is permitted which does not comply with these terms.