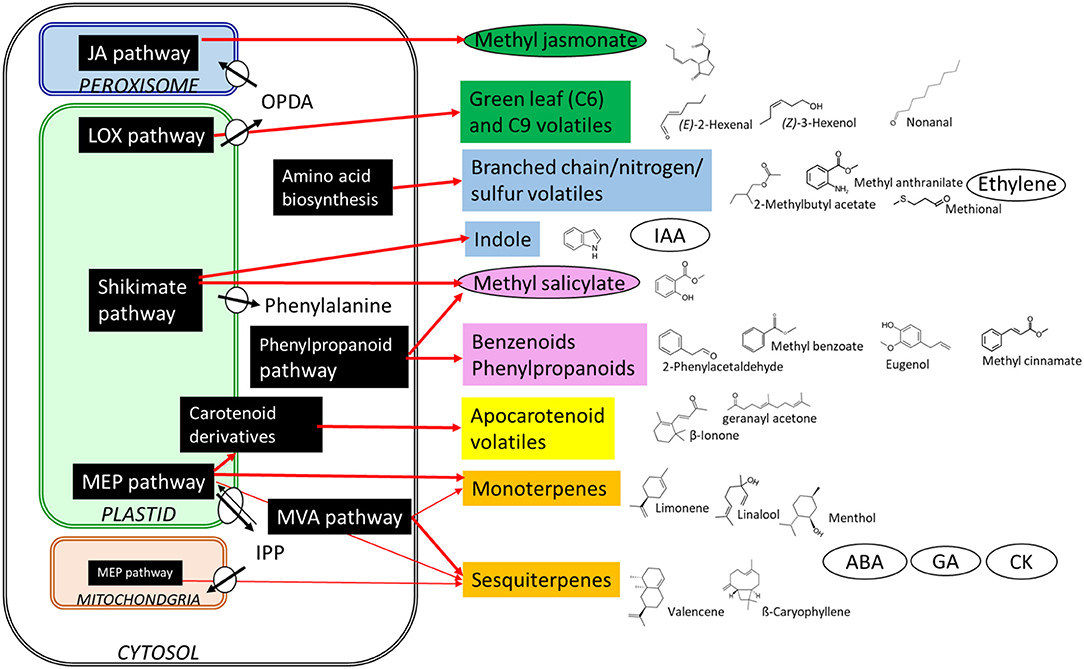 A VOC profile is the key quality attribute in fruit, and is frequently compared between species, cultivars, and hybrids. Deng et al. identified 44 VOCs from 5 muscadine grape cultivars. The significant VOC differences among cultivars, particularly the bronze color and the purple-black color, are due to the quantitative differences of 29 volatiles. The following VOCs were characterized for each cultivar: geraniol and cinnamyl alcohol for Alachua, ethyl (E)-2-butenoate and propyl acetate for Noble, green leaf volatiles for Carlos, Fry, and Granny Val. Zidi et al. identified 29 VOCs from 3 fig cultivars. Two out of the three had 20 VOCs, but only 14 compounds in the third cultivar. Aldehydes comprised the most abundant VOCs identified, while alcohols, ketones, and terpenes comprised the minor compounds found in all cultivars. Specific VOCs in each cultivar were identified and those can be used as fingerprints to distinguish cultivars. Yang et al. identified 10 trans-isopentenyl diphosphate synthase (TIDS) genes, which are involved in terpene diversity and the accumulation of terpenoids, in the genome of the Cinnamomum camphora borneol chemotype that was unevenly distributed on chromosomes. Synteny analysis revealed that the TIDS gene family in this species likely expanded through segmental duplication events.

Changes in VOCs during fruit development and ripening are another relevant issue for the integration of transcriptomic and metabolomic levels. Gong et al. generated the metabolomic and transcriptomic datasets during watermelon fruit growth and development with a total of 517 metabolites. Major VOCs, such as (E,Z)-2,6-nonadienal, (E)-2-nonenal, and (Z)-3-nonen-1-ol, were accumulated during fruit development with sugar increase and acid decline. They found that five alcohol dehydrogenase (ADH) genes were differentially expressed which were closely related to C9 alcohol/aldehyde metabolism. The integration of important genes in the glycolytic and LOX pathways provides molecular insights into flavor formation. Xin et al. identified 181 VOCs from mongo fruits throughout the development and ripening stages. These components, especially ethanol and (E,Z)-2,6-nonadienal, were the key aroma active compounds, and raised during ripening. RNA sequencing revealed 53,384 transcripts in mango, and catalytic activity, transferase activity, adenosine diphosphate binding, transcription factor activity, and oxidoreductase activity were differentially expressed. The content of α-pinene and the expression of genes and enzyme activities in terpenoid metabolic pathways gradually increased after harvest and generally plateaued when reaching the ripe stage. The integrative analyses also revealed potential molecular insights into fruit ripening and aroma biosynthesis. Zidi et al. analyzed the changes of VOC profiles in three fig cultivars. Different aroma descriptors were identified during the postharvest fruit development stages; fruity and green aromas were dominant in all cultivars, while a fatty aroma barely occurred. They demonstrated that certain VOCs differentiate the ripening stages in figs.

Fruit ripening is associated with hormone interaction (McAtee et al., 2013), and a complicated change of VOC profile occurs during ripening. However, Tobaruela et al. provided direct evidence that ethylene and auxin affect VOC profiles independent of ripening. Two tomato cultivars, Micro-Tom and Sweet Grape, had different VOC profiles when reaching the ripening stage. However, both were similarly affected by exogenous ethylene and auxin treatments, with contrary responses to the hormones. Both hormones affect the aroma metabolism overlap, and the hormonal regulation is not cultivar-dependent. The hormones played essential roles in VOC metabolism, especially regarding carotenoid and fatty acid-derived compounds. Han et al. sprayed abscisic acid (ABA) at the late green stage of blueberries resulting in a substantial increase in anthocyanins. The direct reason for the result is due to the high expression of CHS, CHI, DFR, and LDOX/ANS during ripening. Among the transcription factors whose expression changed, VcMYBA had the greatest correlation with the changes of anthocyanin and corresponding synthetic structural genes.

Sun et al. demonstrated how biotic and abiotic factors impact VOC profiles in orange peel oil. Orange trees infected or not infected with huanglongbing disease were sprayed with fungicides/chemical agents. The infected fruit (HLB+) peel had lower concentrations of typical peel oil components, including valencene, octanal, and decanal, and was abundant in oxidative/dehydrogenated terpenes, such as carvone and limonene oxide. One of the enhanced foliar spray programs altered the VOC profile of HLB+ samples, resulting in peel oil similar to that of HLB- samples.

In summary, the work reported here gathered new information on the metabolism of VOCs at the genetic, transcriptional, hormonal, and metabolic levels and their impact on fruit flavor quality. We hope that this Research Topic will encourage scientists to make further efforts to reveal the mechanism of VOC changes and enhance fruit flavor quality.

The mention of trade names or commercial products in this publication is solely for the purpose of providing specific information and does not imply recommendation or endorsement by the U.S. Department of Agriculture. USDA is an equal opportunity employer.

Copyright © 2022 Bai, Jordán and Li. This is an open-access article distributed under the terms of the Creative Commons Attribution License (CC BY). The use, distribution or reproduction in other forums is permitted, provided the original author(s) and the copyright owner(s) are credited and that the original publication in this journal is cited, in accordance with accepted academic practice. No use, distribution or reproduction is permitted which does not comply with these terms.