Soil salinity is an abiotic stress that adversely affects agricultural production throughout the world. It is estimated that approximately 6% of all land and 20% of irrigated land are affected by salinity (Munns and Tester, 2008). Additionally, the area of saline agricultural land is increasing annually, mainly due to irrigation (FAO, 2002). Rice (Oryza sativa L.), one of the most important food crops, is seriously affected by salinity (Munns and Tester, 2008). Salinity inhibits seed germination as well as seedling growth of rice (Anuradha and Rao, 2001), reduces photosynthesis, promotes senescence, and ultimately reduces production in rice (Tuteja et al., 2013).

In cereal seeds, carbohydrates and proteins stored in the endosperm are mobilized during seed germination to provide energy and substrates for developing seedlings. During seed germination, bioactive GAs are synthesized in the embryo and transported to the aleurone layer to induce α-amylase gene expression and α-amylase synthesis. Then, α-amylase is secreted into the endosperm to hydrolyze the stored starch (Kaneko et al., 2002). α-amylase (EC 3.2.1.1) is the major enzyme involved in the hydrolysis of starch to glucose, and accounts for 40–60% of de novo protein synthesis in grains (Sun and Henson, 1991). Previous studies showed that seed germination was significantly inhibited by salinity but could be rescued by GA (Li et al., 2016; Shu et al., 2017). These results imply that salinity-inhibited seed germination may be caused by a decrease in GA content. However, the underlying mechanism of salinity-inhibited seed germination remains unclear. To elucidate the mechanism, the effects of salinity on GA metabolism, α-amylase gene expression, and α-amylase activity were investigated in this study.

Rice seeds were incubated in 9-cm Petri dishes with distilled water (control), 120 mM NaCl, or 120 mM NaCl + 50 μM GA3. The germination rates were calculated after 96 h incubation. Every treatment had five replicates, and each replicate included 50 seeds. A seed was recorded as germinated when the root length was ≥ 1 cm and the shoot length was ≥ 0.5 cm.

Rice seeds were incubated in 9-cm Petri dishes with distilled water (control) or 120 mM NaCl. After 96 h incubation, the embryos from germinating seeds were collected for GA measurements. Quantification of endogenous GAs was performed as described (Chen et al., 2012).

Rice seeds were sterilized according to the method of Yin et al. (2011) and then incubated with distilled water (control), 120 mM NaCl, or 120 mM NaCl + 50 μM GA3 at 28°C. After 24, 48, 72, and 96 h incubation, the crude extract was prepared according to the method of Sottirattanapan et al. (2017). Each sample consisting of 15 germinating seeds was collected, ground, and mixed with 100 mL chilled distilled water for enzyme extraction. The mixture was soaked in a cooling bath at 4°C for 10 min with occasional agitation. After soaking, the mass was squeezed through a nylon cloth to collect the extract. The extract was then centrifuged at 10,000 × g for 10 min at 4°C, and the clear supernatant was used as the crude extract.

α-Amylase activity was quantitatively assayed by a slightly modified version of the 3,5-dinitrosalicylic acid method of Miller (1959). The crude enzyme extract was heated for 15 min at 70°C. Then, 1 mL of the crude enzyme extract was mixed with 1 mL of 1% soluble starch dissolved in sodium acetate buffer at pH 5.6. The mixture was incubated for 15 min at 40°C and then boiled for 5 min in the presence of 2 mL of 3,5-dinitrosalicylic acid. The amount of released reducing sugar was measured using a UV-vis spectrophotometer (UV-2100, Unico Instrument Co., Ltd., Shanghai, China) at 540 nm with maltose as the reducing sugar standard. One unit of α-amylase activity was defined as the amount of enzyme that produced 1 μM of maltose per minute under the enzyme activity conditions.

To qualitatively assess the effect of salinity on α-amylase activity, we used a starch plate test using embryoless half-seeds according to the method of Xie et al. (2007). Rice seeds were sterilized according to the method of Yin et al. (2011), and then incubated with distilled water (control), 120 mM NaCl, or 120 mM NaCl + 50 μM GA3 at 28°C for 48 h. The seeds were then cut transversely to remove the embryos, and the embryoless half-seeds were then placed on 2% agar in 9-cm Petri dishes with the cut edge on the agar. The agar plates included 0.2% soluble potato starch, 20 mM CaCl2, 20 mM sodium succinate pH 5.0, and one of the following treatments: control (without NaCl and GA), 120 mM NaCl, or 120 mM NaCl + 50 μM GA3. The dishes were incubated at 28°C for 48 h. After incubation, the plates were flooded with I2/KI solution (2.8 mM I2 + 43.4 mM KI in 0.2 N HCl). After 5 min, the reaction between starch and iodine turned the agar plates blue-purple. The agar around the half-seeds with α-amylase activity remained colorless due to the hydrolysis of starch by α-amylase. The colorless area increased as the α-amylase activity increased. 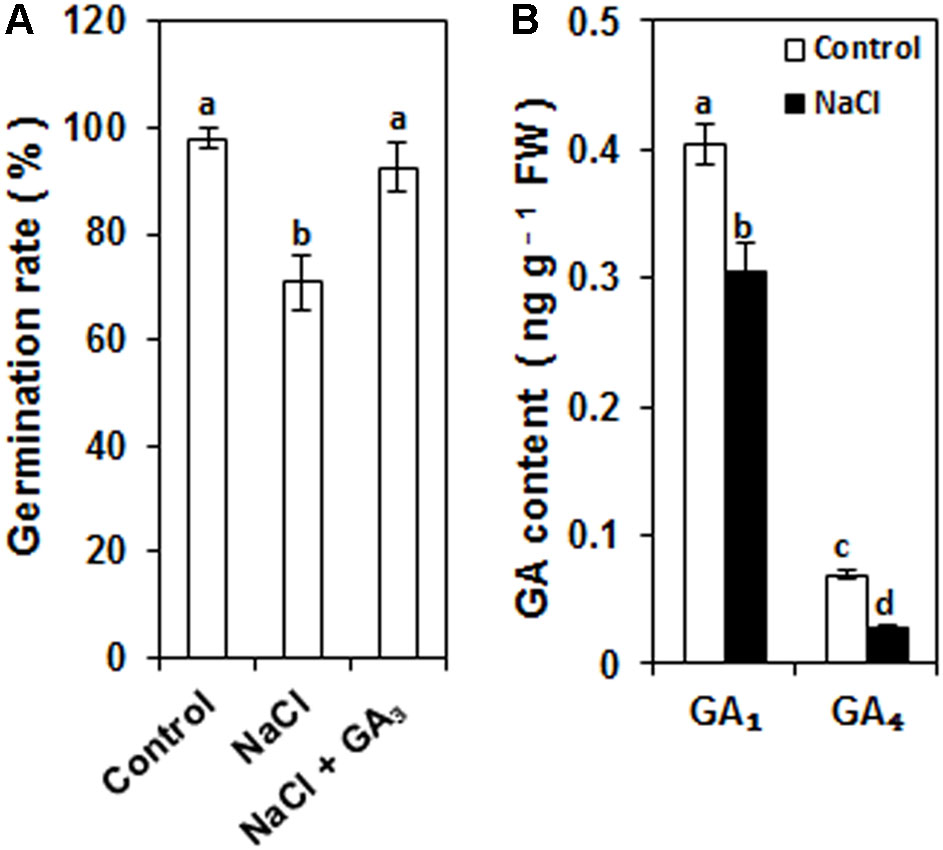 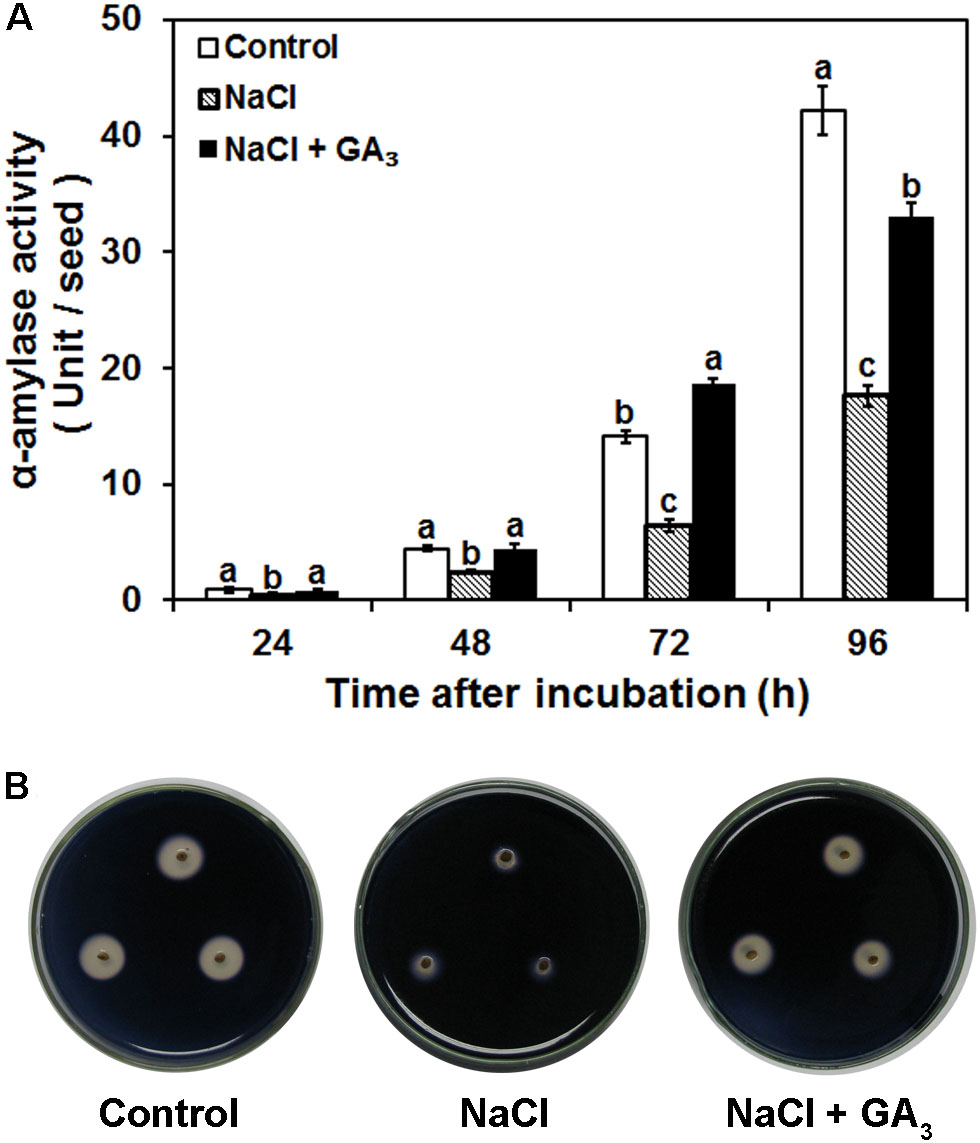 α-Amylases, such as OsAmy1A (RAmy1A), OsAmy1C (RAmy1C), OsAmy3C (RAmy3C), and OsAmy3E (RAmy3E), are required for starch degradation during seed germination (Huang et al., 1990; Karrer et al., 1991; Sutliff et al., 1991). To explore how salinity may decrease α-amylase activity, the effects of the control, NaCl, and NaCl + GA3 treatments on α-amylase gene expression, which is closely related to the production of α-amylase, were analyzed. The results show that at 6 h after incubation, the expression levels of all α-amylase genes were significantly decreased by NaCl treatment, whereas exogenous application of GA3 rescued this decrease (Figure 4). This result indicates that salinity decreases α-amylase activity mainly via down-regulation of α-amylase gene expression. 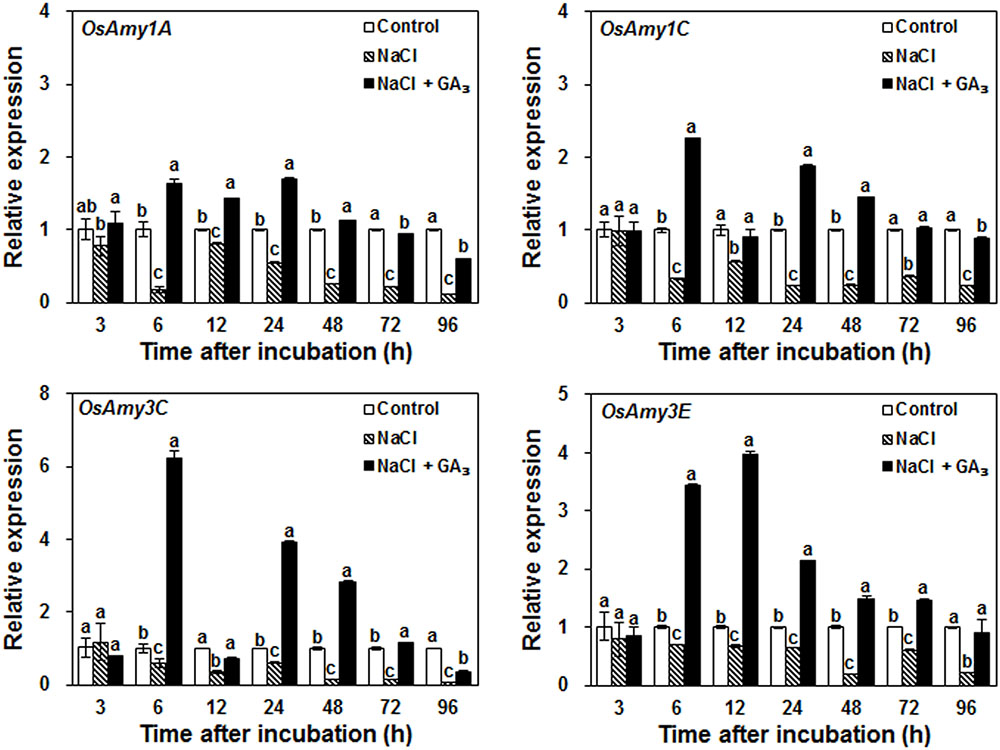 Our results demonstrate that, during rice seed germination, GA biosynthetic genes were up-regulated by NaCl treatment in the majority of the observed time courses (Figure 2A). Additionally, all GA2ox genes, which are responsible for regulating rice seed germination (Lo et al., 2008), were also up-regulated by NaCl treatment (Figure 2B). These results, in addition to the evidence that the bioactive GA content was decreased by NaCl treatment, indicate that NaCl induces bioactive GA deficiency by enhancing bioactive GA inactivation rather than by inhibiting bioactive GA biosynthesis; they also imply that up-regulated GA biosynthetic gene expression may be a consequence of negative feedback regulation of NaCl-induced bioactive GA deficiency. Our results are supported in Arabidopsis, a dicotyledonous model plant that also responds to high-salinity stress through a decrease in endogenous GA content and up-regulation of GA2ox genes expression (Magome et al., 2008). Our results are also consistent with a previous report that expression of GA biosynthetic genes, such as GA20ox and GA3ox, was negatively regulated by GA content (Carrera et al., 1999; Rieu et al., 2008; Huang et al., 2010). In contrast, during soybean seed germination, salinity decreased bioactive GA content by negatively regulating GA biosynthesis (Shu et al., 2017).

It has been reported that rice α-amylase genes, such as OsAmy1A, OsAmy1C, OsAmy3C, and OsAmy3E, were significantly up-regulated by GA in wild-type seeds but not in the GA receptor mutant gid1 (a null mutant for GID1). In GA signaling repressor mutant slr1 (a null mutant for DELLA) seeds, regardless of GA treatment, α-amylase gene expression levels were similar to those of GA-treated wild-type seeds (Yano et al., 2015). These previous results confirm that GA regulates α-amylase activity through transcriptional regulation in rice. Our results indicate that NaCl treatment significantly decreases the bioactive GA content, which, in turn, down-regulates α-amylase gene expression and enzymatic activity; these down-regulated parameters can be rescued by GA3 application (Figures 1B, 3, 4). Similarly, a decline in GA content was accompanied by decreased transcription of α-Amy1 and α-Amy2 gene in wheat grain due to ectopic expression of PcGA2ox1 (Appleford et al., 2007). The results of our current study and previous research indicate that NaCl-induced GA deficiency decreases α-amylase activity by down-regulating the expression of α-amylase genes.

The Supplementary Material for this article can be found online at: https://www.frontiersin.org/articles/10.3389/fpls.2018.00275/full#supplementary-material

Bialecka, B., and Kpczynski, J. (2009). Effect of ethephon and gibberellin A3 on Amaranthus caudatus seed germination and α- and β-amylase activity under salinity stress. Acta Biol. Cracov. Bot. 51, 119–125.

Copyright © 2018 Liu, Xia, Li, Zeng, Wei, Han and Yin. This is an open-access article distributed under the terms of the Creative Commons Attribution License (CC BY). The use, distribution or reproduction in other forums is permitted, provided the original author(s) and the copyright owner are credited and that the original publication in this journal is cited, in accordance with accepted academic practice. No use, distribution or reproduction is permitted which does not comply with these terms.