Phosphorus is essential for plant viability. Phosphate-starved plants trigger membrane lipid remodeling to replace membrane phospholipids by non-phosphorus galactolipids presumably to acquire scarce phosphate source. Phosphoethanolamine/phosphocholine phosphatase 1 (PECP1) and phosphate starvation-induced gene 2 (PS2) belong to an emerging class of phosphatase induced by phosphate starvation and dephosphorylates phosphocholine and phosphoethanolamine (PEtn) in vivo. However, detailed spatiotemporal expression pattern as well as subcellular localization has not been investigated yet. Here, by constructing transgenic plants harboring functional translational promoter–reporter fusion system, we showed the expression pattern of PECP1 and PS2 in different tissues and in response to phosphate starvation. Besides, the Venus fluorescent reporter revealed that both are localized at the ER. Characterization of transgenic plants that overexpress PECP1 or PS2 showed that their activity toward PEtn may be different in vivo. We suggest that PECP1 and PS2 are ER-localized phosphatases that show similar expression pattern yet have a distinct substrate specificity in vivo.

Phosphorus is an essential nutrient for plant growth and development. Due to limited availability in many soils, metabolic change toward utilization of plant internal phosphate reserve is an important response to circumvent phosphate starvation. Phospholipids have been focused as a major reserve of internal phosphate due to its abundance; however, they play critical roles in the construction and maintenance of cellular membranes. Indeed, a number of evidence indicates that phospholipid biosynthesis is essential for plant function (Nakamura, 2017). During phosphate starvation, a metabolic conversion termed the membrane lipid remodeling (Nakamura, 2013) occurs that replaces phosphate-containing polar head group of phospholipids with non-phosphorus galactose group, thereby converting the membrane lipid content from phospholipids to galactolipids presumably to cope with phosphate starvation (Figure 1A). Although gene knockout study that impedes the conversion process suggests that this metabolic remodeling is important in plant phosphate starvation tolerance (Nakamura et al., 2009), there is lack of evidence as to whether polar head group-derived phosphate is indeed utilized as a phosphate source. This is because the identity and function of phosphatase(s) that dephosphorylates the polar head group has remained enigmatic in plants. 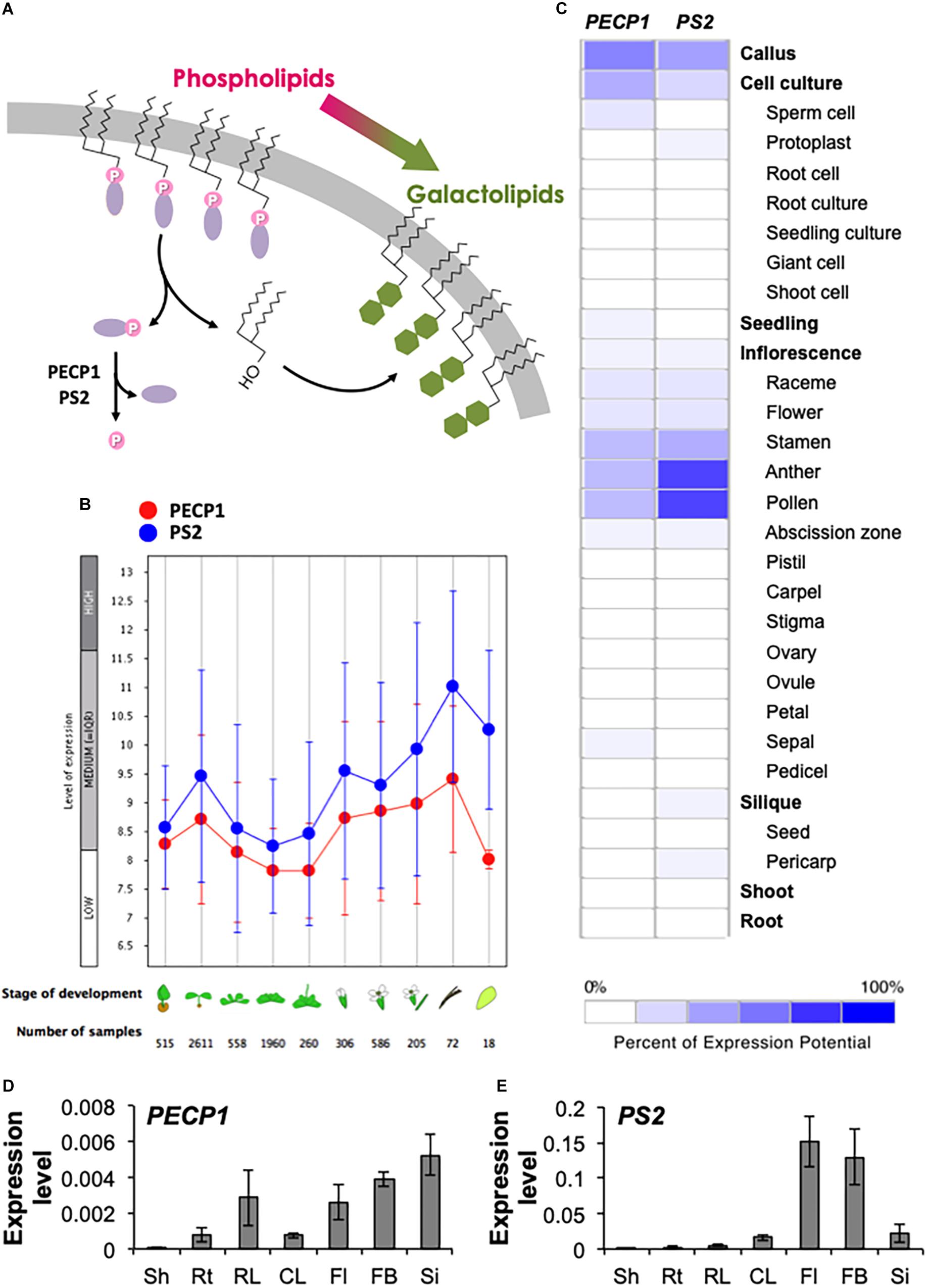 Phosphate starvation-induced gene 2 (PS2) is a commonly used marker for phosphate starvation response in Arabidopsis (Chandrika et al., 2013). A biochemical study showed that PS2 encodes a functional HAD-like phosphatase in vitro, for which the authors designated PPsPase1 (May et al., 2011). Later, a close homolog of PS2/PPsPase1, named PECP1, was found to be a phosphatase that dephosphorylates major polar head group of phospholipids such as phosphoethanolamine (PEtn) and phosphocholine (PCho) in vitro (May et al., 2012). Although PECP1 but not PS2/PPsPase1 hydrolyzes the phospholipid polar head group in vitro, gene knockout study of the pecp1-1 ps2-3 double mutant (Angkawijaya and Nakamura, 2017) as well as in planta overexpression study (Hanchi et al., 2018) suggest that both are redundant in dephosphorylating the polar head group in vivo. Despite a possible overlapping function of two closely related phosphatases, comparative study on their tissue expression profiles and subcellular localization has not been reported. Besides, in vivo overexpression study of these enzymes toward PEtn dephosphorylation needs validation to clarify whether designated reaction product is indeed accumulated in planta following the overexpression. Thus, possibly differential function of these phosphatases remains obscure in vivo.

In this report, we investigated spatiotemporal expression profiles of PECP1 and PS2 proteins by constructing transgenic plants harboring functional translational promoter–reporter fusion system. Using GUS reporter, we showed the expression patterns of PECP1 and PS2 in different tissues and in response to phosphate starvation. The use of Venus fluorescent reporter revealed that both are localized at the ER. In vivo overexpression study indicates that their activity toward PEtn may be different in vivo. We suggest that PECP1 and PS2 are ER-localized phosphatases that show similar expression pattern yet have a distinct substrate specificity in vivo.

Arabidopsis thaliana (ecotype; Columbia-0) was used throughout the study. Plants were grown under long-day (16 h light/8 h dark) photoperiodic condition at 22°C with light intensity of 75 μmol m−2 s−1. For plate culture, Murashige and Skoog (MS) medium was used at half-strength concentration (Murashige and Skoog, 1962). The pecp1-1 ps2-3 plant was as described previously (Angkawijaya and Nakamura, 2017). For phosphate starvation experiments, medium was prepared according to previous publication (Angkawijaya et al., 2017).

Genomic sequence of PECP1 (2,636 bp) was amplified by PCR from A. thaliana wild-type genomic DNA using the primers YN1397/YN1398 (see Supplemental Table 1 for the sequences of primers used hereafter). The PCR products were cloned into pENTR/D-TOPO plasmid (Invitrogen, Thermo Fisher Scientific, Waltham, MA) to obtain pYL21 (pENTR_ProPECP1:PECP1). To create either ProPECP1:PECP1-GUS or ProPECP1:PECP1-Ven, the SfoI site was introduced 5′ to the stop codon of pYL21 by PCR-based site-directed mutagenesis (Sawano and Miyawaki, 2000) with a primer YN1404 to obtain pYL23. The GUS or Venus cassettes were inserted into the SfoI site of this plasmid to generate pFG7 and pFG8, respectively.

To create Pro35S:PECP1, 840 bp of the open reading frame (ORF) for PECP1 was amplified by PCR with the primers FG21 and FG22. To create this construct, SalI site was inserted before the MluI site of pYN2047 (Lin et al., 2015) by PCR-based site-directed mutagenesis (Sawano and Miyawaki, 2000) with the primer PP68 to obtain pAA044. The ORF fragment was then cloned into the SalI and EcoRI sites of pAA044 to obtain pFG14.

Genomic sequence of PS2 (5,259 bp) was amplified by PCR from A. thaliana wild-type genomic DNA using the primers PK66/PK10. The PCR products were cloned into pENTR/D-TOPO plasmid to obtain pPK1 (pENTR_ProPS2:PS2). To create either ProPS2:PS2-GUS or ProPS2:PS2-Ven, the SfoI site was introduced 5′ to the stop codon of pPK01 by PCR-based site-directed mutagenesis (Sawano and Miyawaki, 2000) with a primer PK11 to obtain pPK02. The GUS or Venus cassettes were inserted into the SfoI site of this plasmid to generate pPK07 and pPK08, respectively.

To create Pro35S:PS2, 888 bp of PS2 ORF was amplified by PCR with the primers PK52 and PK54. The ORF fragment was then cloned into the SalI and XbaI sites of pAA044 to obtain pPK04.

Developmental- and Tissue-Specific Expression Patterns of PECP1 and PS2 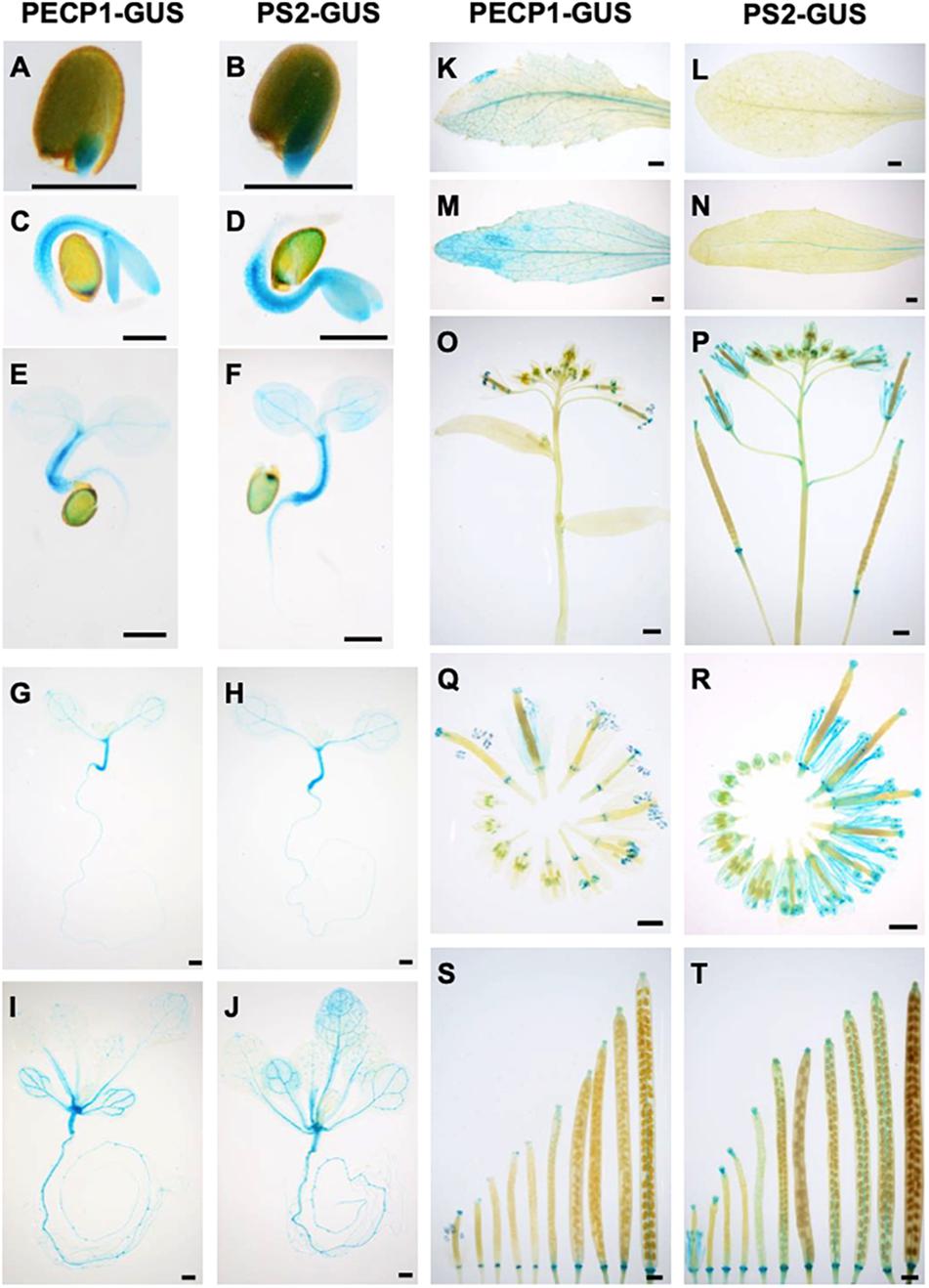 Expression Pattern of PECP1 and PS2 in Response to Phosphate Starvation 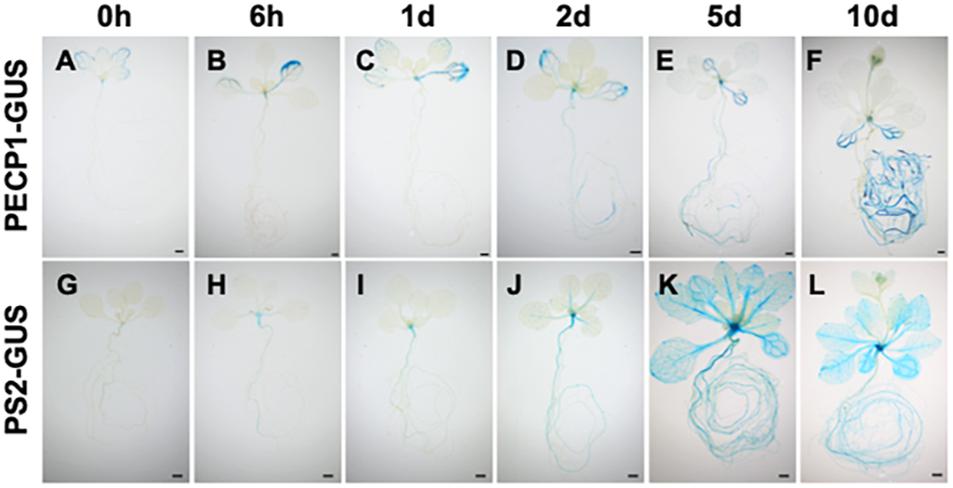 PECP1 and PS2 Were Localized at the ER

To investigate subcellular localization of PECP1 and PS2, we constructed transgenic plants harboring ProPECP1:PECP1-Ven or ProPS2:PS2-Ven in the pecp1-1 ps2-3 background. We observed Ven fluorescent signal in the root cells. Fluorescent signal of neither PECP1-Ven (Figure 4A) nor PS2-Ven (Figure 4B) overlapped with the staining of plasma membrane marker dye (FM4-64). However, a clear overlap was observed with the ER marker dye (ER Tracker) for both PECP1-Ven (Figure 4C) and PS2-Ven (Figure 4D). This expression pattern was confirmed with another independent line for each Ven reporter (Supplementary Figure 3). These results suggest that both PECP1 and PS2 are localized at the ER. 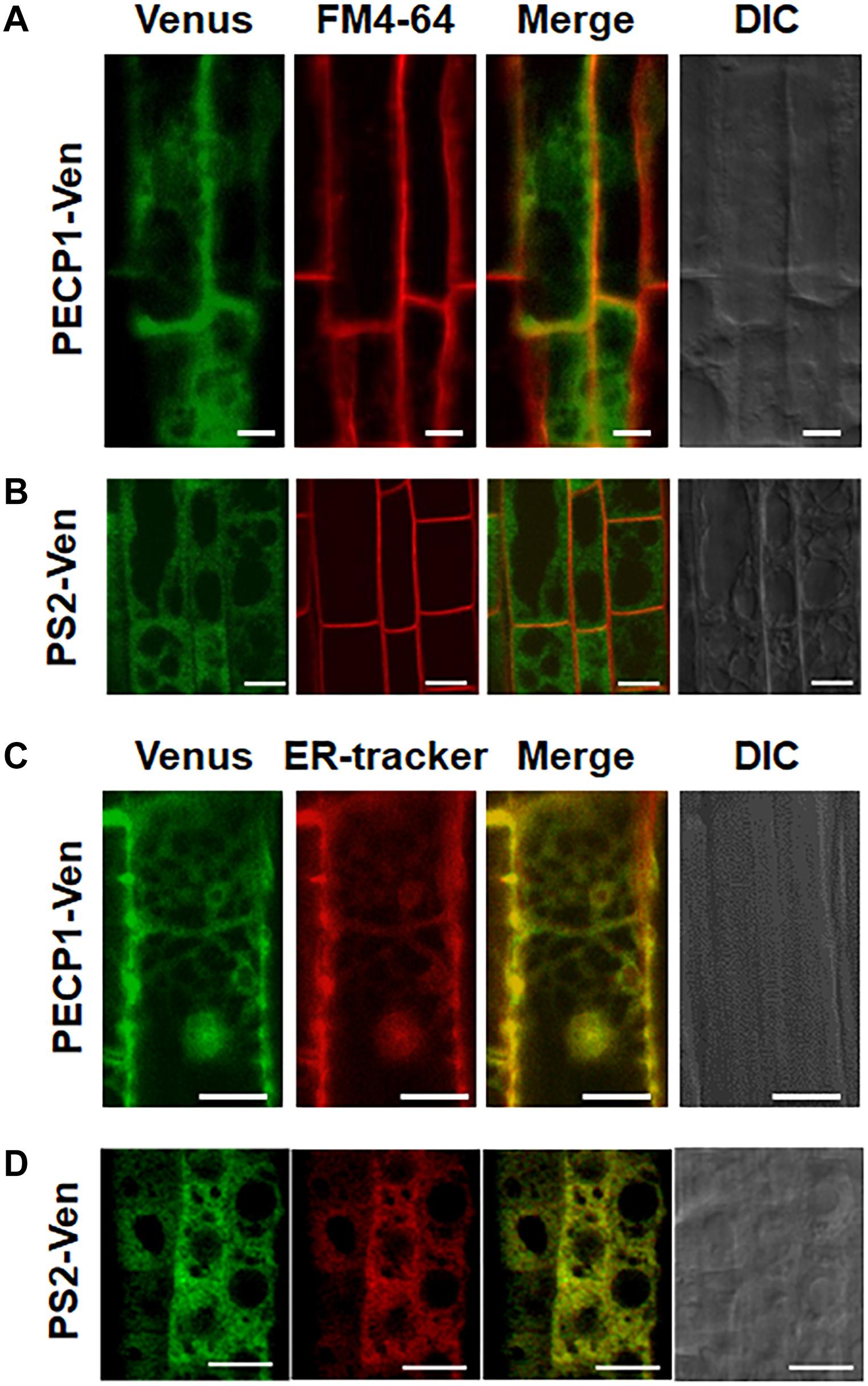 Involvement of PECP1 and PS2 in Ethanolamine Production in vivo 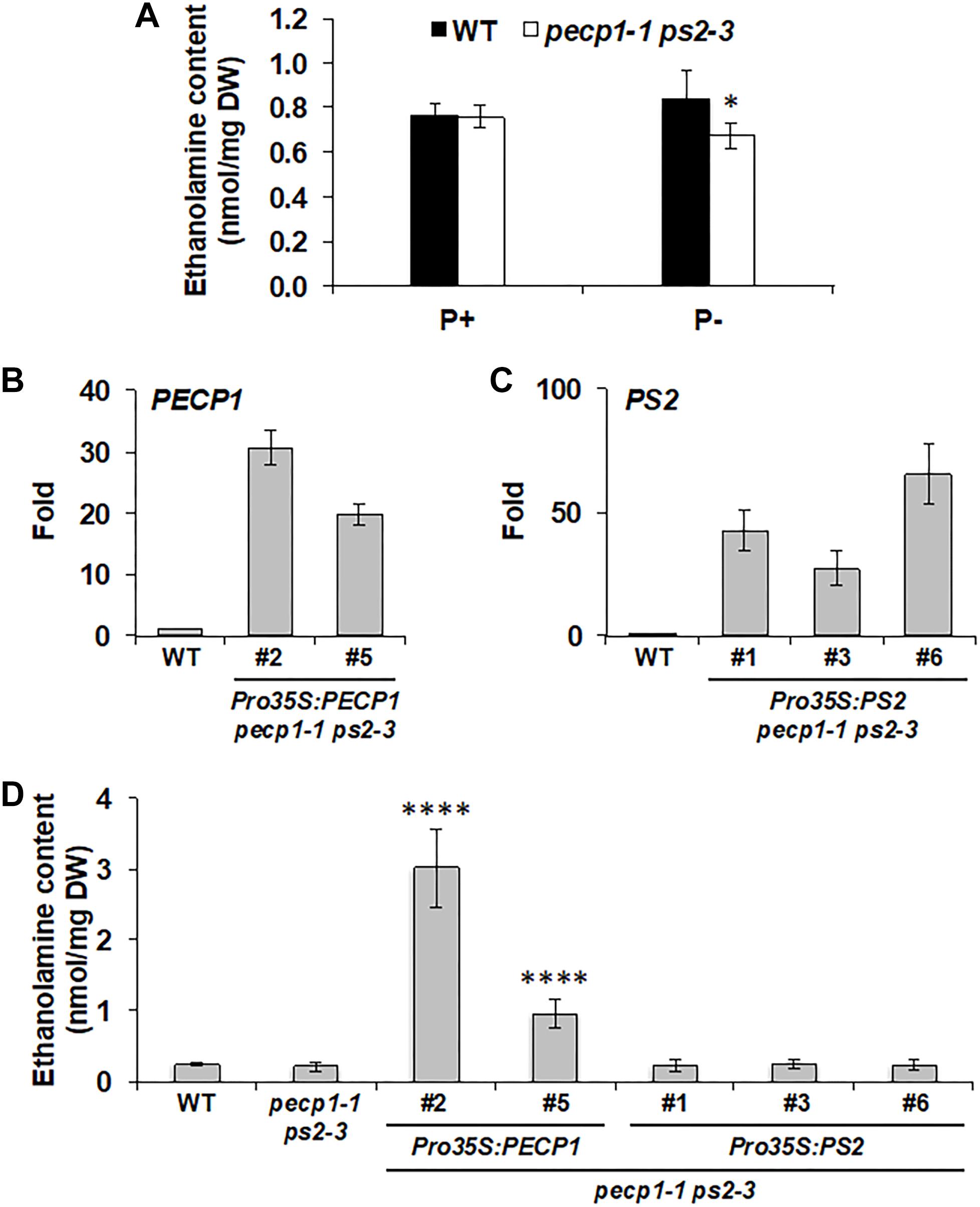 To further confirm the enzymatic function, we constructed transgenes that express PECP1 or PS2 by cauliflower mosaic virus 35S promoter (Pro35S) and transduced them into the pecp1-1 ps2-3. We obtained 24 lines each for Pro35S:PECP1 pecp1-1 ps2-3 and Pro35S:PS2 pecp1-1 ps2-3, and screened 2–3 transgenic lines each with the highest transcript levels of encoded genes (Figures 5B,C). Using these lines, we compared the Etn contents under phosphate-replete growth condition. As shown in Figure 5D, two independent lines of Pro35S:PECP1 pecp1-1 ps2-3 both increased Etn contents significantly. However, no significant increase was observed among three independent transgenic lines of Pro35S:PS2 pecp1-1 ps2-3 compared with wild type. These results suggest that PECP1 has major contribution to produce Etn in vivo.

Membrane lipid remodeling is an important metabolic response for plants to cope with phosphate starvation (Nakamura, 2013). In phospholipid hydrolysis by NPC, the metabolic fate of phosphate-containing head group has been enigmatic while that of DAG is for the precursor of DGDG biosynthesis. A series of recent reports about in vitro (May et al., 2011, 2012) and in vivo (Angkawijaya and Nakamura, 2017; Hanchi et al., 2018; Tannert et al., 2018) characterization on PECP1 and PS2 suggest their possible involvement in the dephosphorylation of the head group of phospholipids, a crucial reaction to release scarce phosphate originated from the membrane phospholipids (Figure 1A). Here, our reports provide expression profiles of these phosphatases at tissue and subcellular levels. Moreover, metabolite analysis of transgenic plants overexpressing PECP1 or PS2 revealed substrate preference of these phosphatases in vivo.

What is the substrate specificity of PECP1 and PS2 in vivo? Enzymatic characterization in vitro shows that PECP1 prefers PEtn than PCho for its substrate (May et al., 2012). In vivo, overexpression of PECP1 in the pecp1-1 ps2-3 increased Etn content (Figure 5D). Although pecp1-1 showed no reduction in Etn level, reduced PEtn phosphatase activity was observed in pecp1-1 (Tannert et al., 2018). No reduction in PCho phosphatase activity was observed in pecp1-1 plants (Tannert et al., 2018). Thus, PECP1 prefers PEtn than PCho both in vitro and in vivo. Regarding PS2, in vitro enzyme activity assay with recombinant PS2 protein shows that neither PEtn nor PCho is a substrate under their assay condition (May et al., 2011). Our result of Etn measurement in phosphate-replete Pro35S:PS2 pecp1-1 ps2-3 plants showed no changes (Figure 5D). Nevertheless, phosphate-starved double mutants of PECP1 and PS2 showed an increase in PEtn and PCho (Hanchi et al., 2018) as well as decreases in Etn (Figure 5A) and Cho (Angkawijaya and Nakamura, 2017), which suggest functional redundancy between PECP1 and PS2. Although no clear evidence is available to address this discrepancy, a possible scenario is that PS2 might require some modification to dephosphorylate PEtn or PCho under phosphate starvation.

ER localization of PECP1 and PS2 (Figure 4) may facilitate access to the substrate, since ER is the major site of phospholipid metabolism. Indeed, NPC5 is ER-localized and is involved in membrane lipid remodeling under phosphate starvation (Gaude et al., 2008). It is possible that a reaction product of NPC activity may be further dephosphorylated by PECP1 and PS2 to liberate free phosphate. Besides, additional pathway(s) may produce the substrate for these phosphatases. For example, phospho-base N-methyltransferase1 and 2 (PMT1 and 2) are transcriptionally induced by phosphate starvation (Misson et al., 2005). On the other hand, levels of the reaction products Etn and Cho may be influenced by contribution of some other pathways related to Etn and Cho production. Some of phospholipase D and glycerophosphodiester phosphodiesterase, which produce Etn or Cho, are induced by phosphate starvation (Li et al., 2006; Gaude et al., 2008; Cheng et al., 2011). This postulates an increase in Etn and Cho contents. It is possible that the decreased production of Etn and Cho in the pecp1-1 ps2-3 may be compensated by these pathways. Future study is anticipated to elucidate the complex interplay of metabolic pathways to acquire free phosphate from membrane phospholipids under phosphate starvation.

All datasets generated for this study are included in the manuscript and/or the Supplementary Files.

The Supplementary Material for this article can be found online at: https://www.frontiersin.org/articles/10.3389/fpls.2019.00662/full#supplementary-material

Sawano, A., and Miyawaki, A. (2000). Directed evolution of green fluorescent protein by a new versatile PCR strategy for site-directed and semi-random mutagenesis. Nucleic Acids Res. 28:E78.

Copyright © 2019 Angkawijaya, Ngo, Nguyen, Gunawan and Nakamura. This is an open-access article distributed under the terms of the Creative Commons Attribution License (CC BY). The use, distribution or reproduction in other forums is permitted, provided the original author(s) and the copyright owner(s) are credited and that the original publication in this journal is cited, in accordance with accepted academic practice. No use, distribution or reproduction is permitted which does not comply with these terms.

Lipid and Membrane Trafficking in Plant Development and Environmental Responses