Growing cultivated rice with a moderate heading date is the key to expanding its cultivation area and maintaining stable yields. The genes that regulate heading date are largely cloned; however, it remains unclear how genetic mutations and their combinations affect the heading date and adaptability of cultivated rice. Here, we report the analysis of genetic variation in eight long-day flowering suppressor genes (Hd1, DTH8, Ghd7, OsCOL4, DTH7, Hd6, Se5, and PhyB) and the phylogenetic relationship of eight genes. Genetic variations in DTH8, Ghd7, Hd1, DTH7, PhyB, and OsCOL4 are correlated with differences in heading date and the correlation between the genetic diversity of Hd6 and Se5 and rice heading data are weak. One group of haplotypes of DTH8, Ghd7, Hd1, DTH7, PhyB, and OsCOL4 are associated with earlier heading dates and appear to have accumulated during the northward expansion of rice cultivation. A minimum of four group A alleles of DTH8, Ghd7, Hd1, DTH7, PhyB, and OsCOL4 are required for the growth of cultivated rice at latitudes above 30°N. This study presents a preliminary investigation of the genetic patterns and adaptation mechanisms of long-day flowering suppressor genes and provides a useful reference for the molecular breeding of rice cultivars for various environments and farming systems.

To make full use of sunlight and temperature resources and to ensure food security, it is necessary to selectively breed rice varieties whose heading dates are suited to the climatic characteristics of different regions (Itoh et al., 2018). The ancestral species of cultivated rice (Oryza rufipogon Griff.) is a short-day sensitive plant that grows mainly in low-latitude tropical and subtropical regions. After natural selection and artificial domestication, the geographical distribution of cultivated rice gradually expanded from 45°N to 23°S (Monfreda et al., 2008; Huang et al., 2012), growing under both long-day and short-day conditions. During the expansion process, it was important to cultivate varieties with appropriate heading dates. Therefore, exploring the genetic mechanisms that underlie heading date diversity in cultivated rice is important for understanding its domestication history and the cultivation of eurytopic rice species.

One hundred and forty-eight samples, including 83 from cultivated rice (Oryza sativa L.) and 65 from wild rice (O.nivara and O.rufipogon) were included in the study. Among these accessions, the 83 cultivated rice accessions covered approximately all subgroups and rice planting areas from Northeastern to Southern China and from Central Asia to South Asia and Southeast Asia (Table S1, Figure S1). The 65 wild rice accessions covered most of tropical and subtropical of Asia from Southern China (28°N) to Indonesia (10°S). Detailed information about the accessions, including names, countries of origin, geographic locations, and subpopulation classifications, is presented in Table S1. All seeds were breaked dormancy by keeping at 50°C, 72 h, then soaked for 48 h in water; they were then planted in nutritious soil and raised in wet-bed condition for 23–26 days for reaching the seedling stage. Seedlings were then transplanted into the same agricultural field in Peking (116°13'E, 39°54'N) on May 5, 2016, May 5, 2017, and May 5, 2018, respectively during the summer under natural long-day conditions. Seedlings from each accession were planted in a single row of 10 plants in each of the years. Field management was performed according to typical rice cultivation practices. Heading date was scored for each plant as the number of days from the sowing date to the date at which the first panicle measured 1–2 cm; The mean heading date of 30 plants per accession for the 3 years was calculated (Table S1). Of the 83 cultivated rice accessions, 15 did not have heading date data because the seedlings did not survive.

DNA Sequence alignment was performed with ClustalX 2.1 (Larkin et al., 2007) and manually adjusted in BioEdit (http://www.mbio.ncsu.edu). Polymorphic sites were analyzed using DnaSP5.0 (Huelsenbeck and Ronquist, 2001), and insertions/deletions (indels) were included in the analysis. Gaps with a length greater than one were considered to be single mutations. Network trees for the eight genes of interest were constructed using the median-joining model of DnaSP5.0 and Network 4.0 (Bandelt et al., 1999), and divided DTH8, Ghd7, Hd1, DTH7, PhyB, and OsCOL4 into two groups (A and B) based on genetic distance.

To determine whether haplotype in groups A and B of the six long-day suppression genes (DTH8, Ghd7, Hd1, DTH7, PhyB and OsCOL4) differed in heading date, we constructed boxplots of rice heading date data using R version 3.5.2 and used paired t-test to assess significant differences. We then investigated differences in frequency of haplotype groups A and B with latitude from 45°N to 23°S by constructing a heatmap in Excel based on rice haplotype coordinate data. Ultimately, to analyze the geographic distribution of group A and group B samples, geographic distribution maps of rice from haplotype groups A and B of each gene were constructed using leaflet function in R based on geographic coordinates. To explore the association between haplotype combinations and climate factors, raw data for Minimum Temperature of Coldest Month were download from the WorldClim Version 2 database (http://worldclim.org/bioclim) at a 30 s (~1 km) resolution. Using sp and rgdal function in R, the data were converted into a climate density map, and haplotype combination data points for OsCOL4, DTH7, PhyB, Ghd7, and DTH8 were overlaid onto the map based on geographic coordinate data. To determine the relationships between haplotype combination and heading date or latitude, we again constructed boxplots in R. The effect of haplotype combination was assessed using the Anova function in R, and mean separations were performed using the LSD function in R (Grunsky, 2002).

One hundred and forty-eight rice samples were collected from major rice cropping areas, including 83 representative cultivated rice samples and 65 wild rice samples (Table S1, Figure S1). The coding regions of eight long-day suppressor genes (DTH8, Ghd7, Hd1, DTH7, PhyB, OsCOL4, Hd6, and Se58) were sequenced using the primers in Table S2. Diagrams of their gene structures are shown in Figure S2. Exon numbers ranged from one to ten, with one exon in DTH8 and 10 in Hd6. Sequence lengths ranged from 774 bp to 3516 bp, and 233 SNPs were found among all the sequences (25, 47, 41, 59, 30, 19, 10, and 2 SNPs in DTH8, Ghd7, Hd1, DTH7, PhyB, OsCOL4, Hd6, and Se5, respectively). Among these SNPs, all mutations in Se5 were silent mutations that did not affect the coding for amino acids. More than half of the remaining seven genes had SNPs that led to changes in amino acid sequence, and most of the biologically significant mutations were located in the first exon (Figure S3). Three, 2, 1, 5, and 1 SNPs that generated premature stop codons were identified in DTH8, DTH7, Ghd7, Hd1, and Hd6, respectively (Figure S3). Three, 4, 2, 6, 3, 1, and 1 indels were identified in DTH8, DTH7, Ghd7, Hd1, PhyB, OsCOL4, and Hd6, respectively (Figure S3); there were no indels in Se5 (Figure S3). There was greater genetic diversity in DTH8, DTH7, Ghd7, Hd1, PhyB, and OsCOL4 than in Hd6 and se5.

To assess the genetic relationships among taxa we first calculated the numbers of haplotypes and constructed network tree. Mutation sites of each gene in the 148 samples were analyzed, and 18, 41, 41, 42, 28, 22, 3, and 13 haplotypes were found in DTH8, DTH7, Ghd7, Hd1, PhyB, OsCOL4, Se5, and Hd6, respectively (Figure S3). The number of haplotypes with a frequency greater than 5% was 6, 6, 2, 6, 2, 5, 2, and 2 in DTH8, DTH7, Ghd7, Hd1, PhyB, OsCOL4, Se5, and Hd6, respectively. Frequencies of these haplotypes ranged from 5.10% to 86% (Table S3). Network trees for the eight genes were constructed using the median-joining (MJ) method. Based on the relationship among haplotypes and the haplotype frequency in population, we found that DTH8, DTH7, Ghd7, Hd1, PhyB, and OsCOL4 were all centered around high-frequency haplotypes and clearly differentiated into two groups, which we called group A and group B (Figure 1 and Figure S3). In DTH8, DTH7, Ghd7, PhyB, and OsCOL4, we found that the ancestral haplotypes in group B were mainly composed of indica and wild rice, whereas the ancestral haplotypes in group A were mainly composed of japonica and wild rice grown in China (Figure 1). 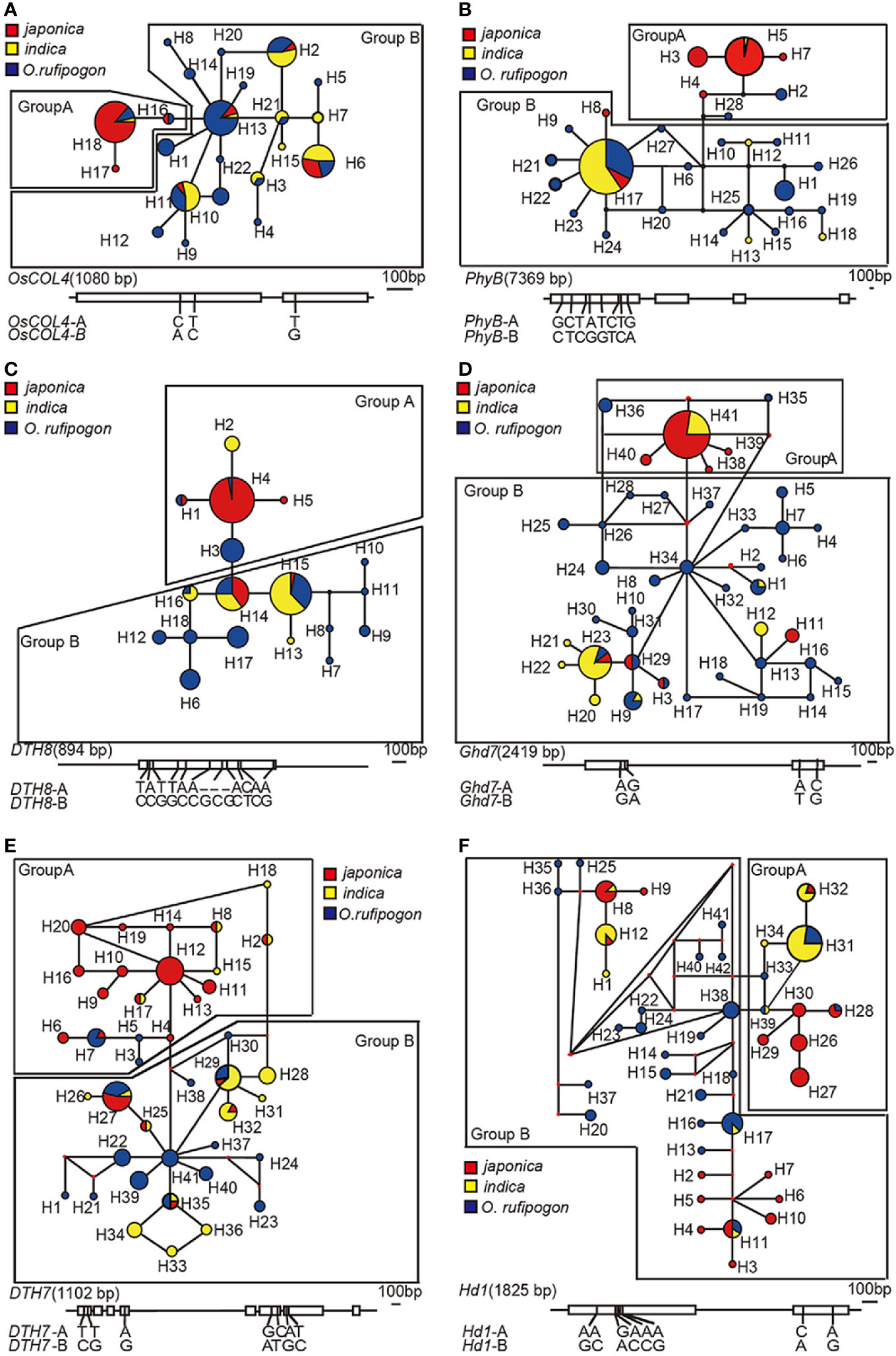 Additionally, We also analyzed the geographical distribution of samples from both haplotype groups. Group A haplotypes were found at the greatest frequency in cultivated rice from high-latitude regions basically, including Heilongjiang, Jilin, Liaoning, Shanxi, Beijing, and Tianjin in China, as well as from Japan and South Korea. Group B haplotypes were found at the greatest frequency mainly in cultivated rice from the southern regions of China, as well as from tropical and subtropical regions of South and Southeast Asia (Figures 1 and 2, Table S1). By contrast, although the Hd1 gene was also centered on high-frequency haplotypes and separated into two groups (i.e. group A and group B), the composition and geographical distribution of subcultivars in groups A and B were different from those of DTH8, DTH7, Ghd7, PhyB, and OsCOL4. Specifically, both japonica and indica were found in group A and group B, and cultivated rice species in both groups were distributed from 45°N to 23°S. Hd6 and Se5 had only one high-frequency haplotype apiece, and these haplotypes accounted for 81% and 86% of the total haplotypes of the two genes, respectively (Figure S4). 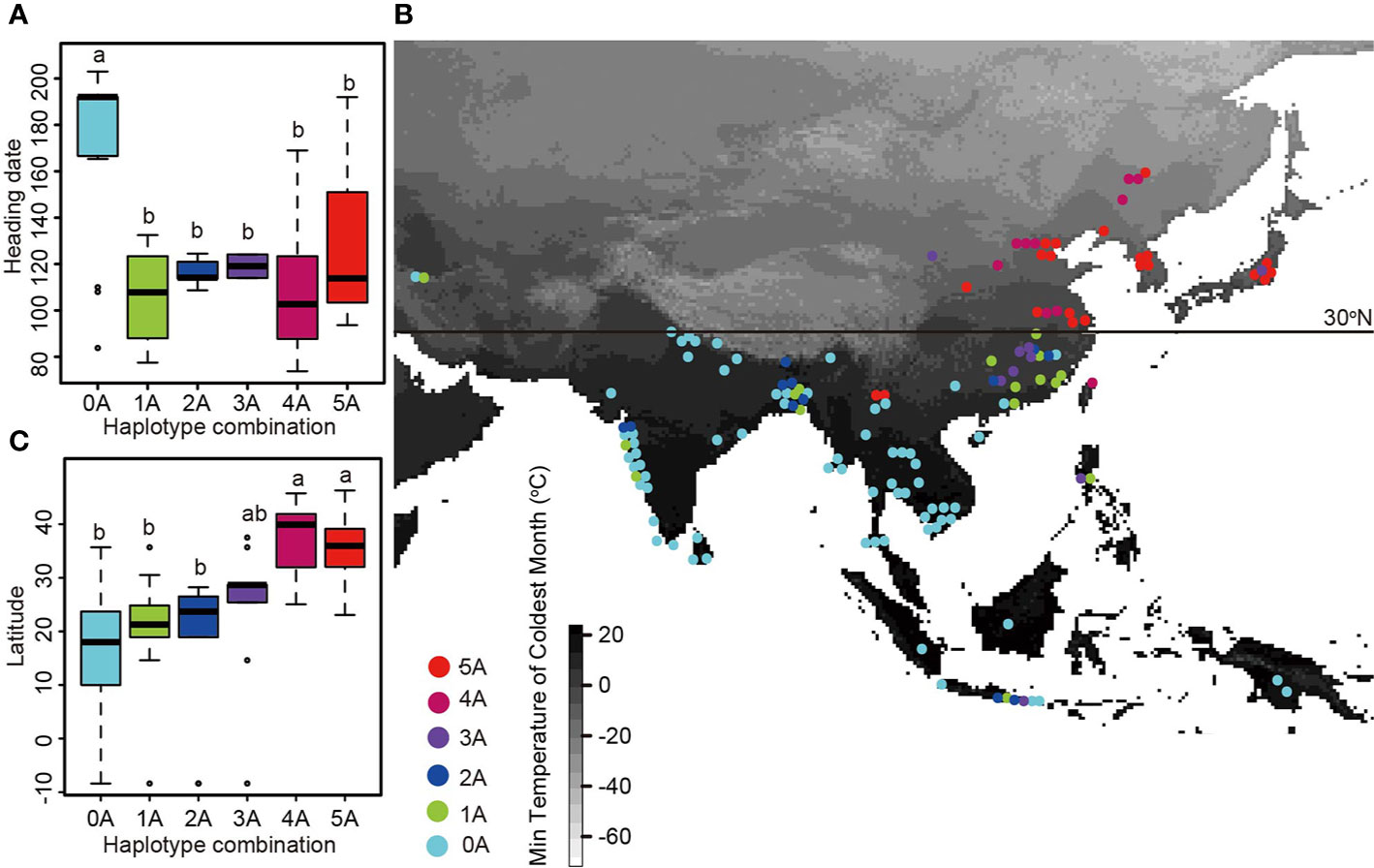 In conclusion, our study demonstrates that during the northward expansion of cultivated rice, group A haplotypes of the long-day suppressor genes DTH8, DTH7, OsCOL4, Ghd7, and PhyB were selected to permit adaptation to various latitudes and climate conditions, resulting in the development of cultivated rice varieties with various heading dates in different cropping areas due to the additive effects of multiple genes. In the rice cropping areas north of 30°N, group A haplotypes in long-day suppressor genes replaced group B haplotypes, forming a clear dividing line at 30°N between haplotypes in groups A and B.

QY and XZ were responsible for study design. LF and SL performed the experiments. JL and YS helped in preparing figures and tables. ZZ, WQ, YLC, and LZ were involved in resources collection. YXC, JW, and LF analyzed the data and wrote the manuscript with editing help from all co-authors. QY and XZ supervised.

This work was supported by grants from the National Natural Science Foundation of China (31970237, 31670211) and the Scientific and Technological Innovation Project of the Chinese Academy of Agricultural Sciences.

We would like to express our gratitude to all those who helped us during the writing of this thesis.

The Supplementary Material for this article can be found online at: https://www.frontiersin.org/articles/10.3389/fpls.2020.00864/full#supplementary-material

Copyright © 2020 Cui, Wang, Feng, Liu, Li, Qiao, Song, Zhang, Cheng, Zhang, Zheng and Yang. This is an open-access article distributed under the terms of the Creative Commons Attribution License (CC BY). The use, distribution or reproduction in other forums is permitted, provided the original author(s) and the copyright owner(s) are credited and that the original publication in this journal is cited, in accordance with accepted academic practice. No use, distribution or reproduction is permitted which does not comply with these terms.