Temperature is a critical environmental factor governing plant growth and development. The difference between day temperature (DT) and night temperature (NT), abbreviated as DIF, influences plant architecture. Subjecting plants to artificial DIF treatments is an effective strategy in ornamental horticulture. For example, negative DIF (when DT – NT < 0) generally inhibits stem elongation, resulting in dwarf plants. However, the mechanisms underlying stem growth regulation by DIF remains to be completely elucidated. In this study, we aimed to analyze the growth, transcriptome, and phytohormone profiles of tomato (Solanum lycopersicum) seedlings grown under different DIF treatments. Under positive DIF (when DT – NT > 0), in contrast to the control temperature (25°C/20°C, DT/NT), high temperature (30°C/25°C) increased stem length and thickness, as well as the number of xylem vessels. Conversely, compared with the positive high temperature DIF treatment (30°C/25°C), under negative DIF treatment (25°C/30°C) stem elongation was inhibited, but stem thickness and the number of xylem vessels were not affected. The negative DIF treatment decreased the expression of gibberellin (GA)-, auxin-, and cell wall-related genes in the epicotyl, as well as the concentrations of GAs and indole-3-acetic acid (IAA). The expression of these genes and concentrations of these hormones increased under high temperature compared to those under the control temperature positive DIF. Our results suggest that stem length in tomato seedlings is controlled by changes in GA and IAA biosynthesis in response to varying day and night temperatures.

Plants modulate their growth according to their environmental conditions. In particular, temperature is a critical factor affecting plant growth. Each plant species has a suitable temperature range. Within this range, higher temperatures generally promote shoot growth, including leaf expansion and stem elongation and thickening. However, temperatures above the optimal range suppress growth. In addition to the absolute temperature, the difference in temperature between day and night can affect growth. Normally, night temperatures are lower than daytime temperatures, and plants modulate their growth pattern and metabolism in response to this temperature change. Altering the temperature difference between day and night is one method through which plant growth is controlled in ornamental horticulture. The difference between day temperature (DT) and night temperature (NT), abbreviated as DIF, is defined as DT– NT. Positive DIF occurs when DT is higher than NT, zero DIF occurs when DT is the same as NT, and negative DIF occurs when DT is lower than NT. Negative DIF can be used to control plant height as an alternative to agricultural chemicals (Shimizu, 2007). While the effects were plant species-dependent, it has been reported that negative DIF inhibits stem elongation compared to positive DIF in various plants, including Lilium longiflorum, Dendranthema grandiflora, Cucumis sativus (Shimizu, 2007), and Solanum lycopersicum (Went, 1944; de Koning, 1988).

In this study, we aimed to elucidate the mechanisms underlying stem growth regulation by DIF. To this end, we examined the effects of different DIF treatments on tomato (S. lycopersicum), which is one of the most important vegetable crops. Our analyses of growth, transcriptomes, and hormones strongly suggest that negative DIF-dependent inhibition of stem elongation is mediated by the repression of GA and IAA synthesis accompanied by the regulation of cell wall-related genes. We also report that negative DIF treatment has a minimal effect on stem thickening in tomato seedling.

To examine the effect of temperature under positive DIF on plant growth, tomato seedlings (Managua RZ) were grown under control (25°C/20°C, CT) and high temperatures (30°C/25°C, HT) (Supplementary Figures 1A,B). The stem, hypocotyl, and epicotyl lengths and diameters were significantly greater under HT than those under CT (Figures 1A–C). Histological analysis of hypocotyl cross sections showed that the number of xylem vessels (diameter > 50 μm) were significantly greater under HT than that under CT (Figures 1D,E), indicating that higher temperatures under positive DIF promote stem elongation, stem thickening, and vascular development in tomato seedlings. 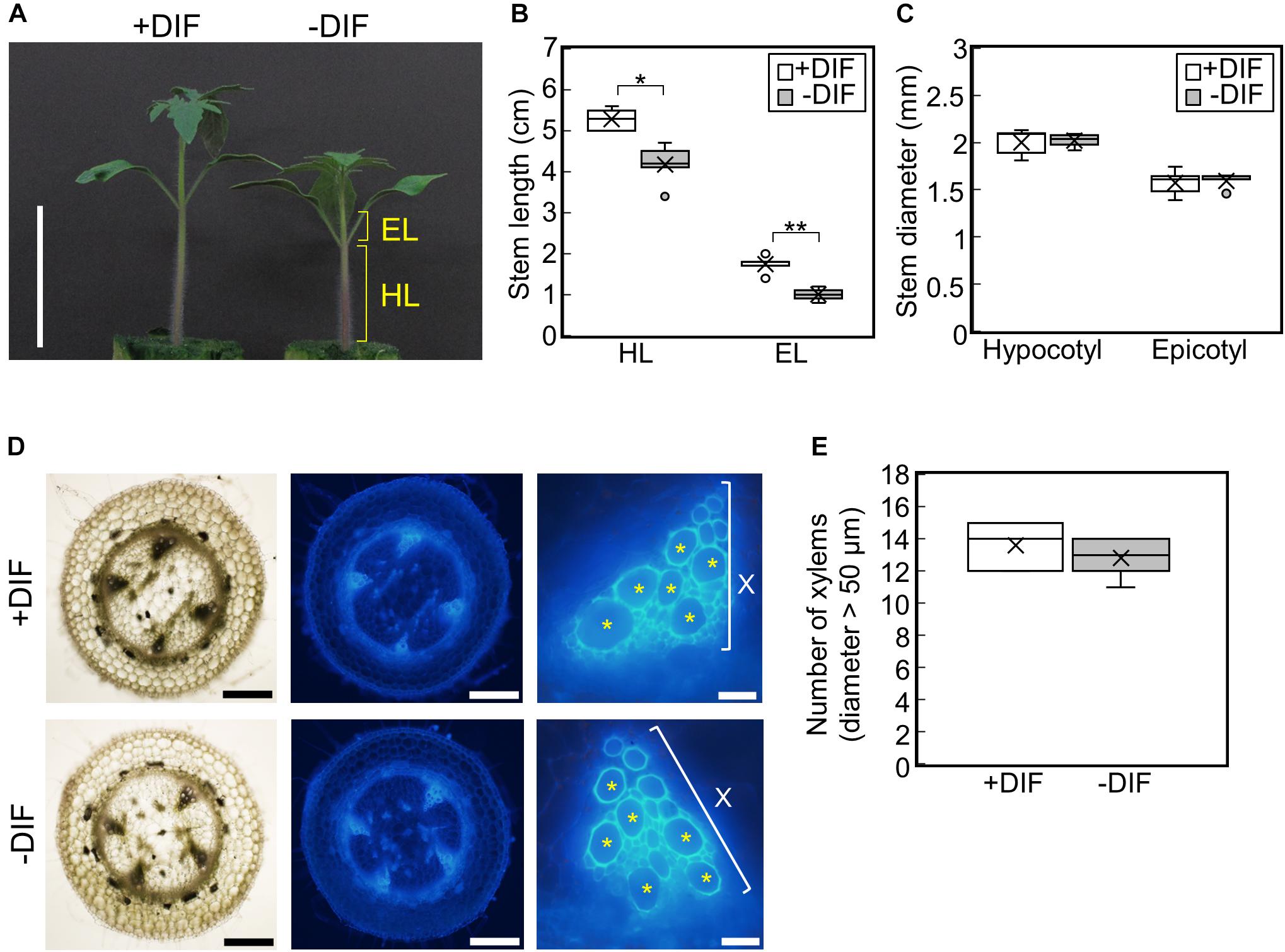 To determine whether these responses were cultivar-specific, we tested the effect of the same DIF treatments on four other tomato cultivars. Similar to Managua RZ, the negative DIF treatment decreased stem length in all four tomato cultivars, but it did not affect stem thickness (Supplementary Figure 3). This suggests that the growth responses observed are a common feature among tomato seedlings. 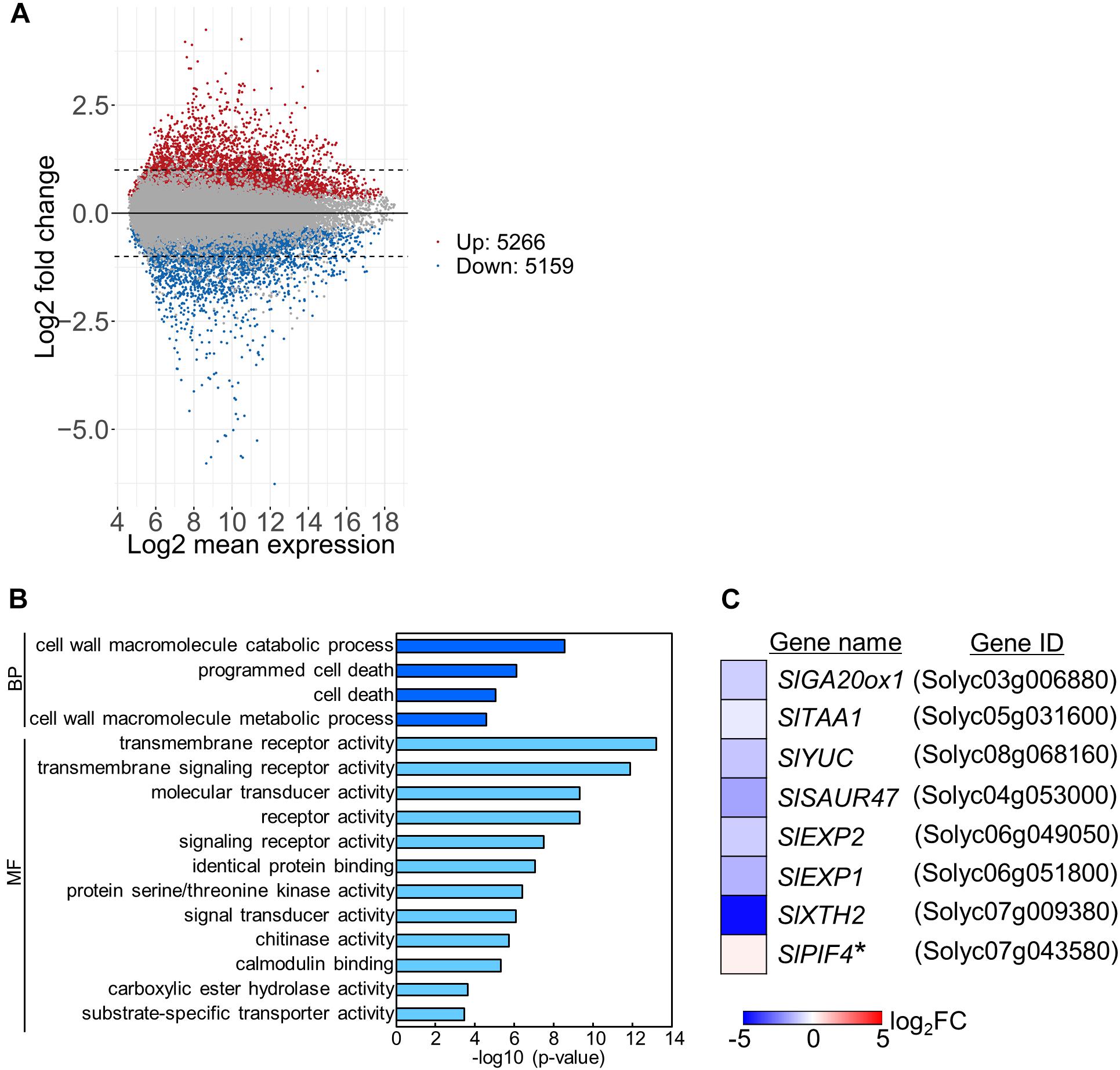 Among the identified DEGs, a key gene of de novo GA biosynthesis, namely GA20-oxidase (SlGA20ox1: Solyc03g006880), was downregulated (Figure 3C). Using reverse transcriptase real-time PCR, we confirmed that the expression of SlGA20ox1 was significantly downregulated in both hypocotyls and epicotyls under the negative DIF treatment (Figure 4A). The following genes involved in IAA biosynthesis were also among the downregulated DEGs: YUCCA (YUC), which encodes a flavin monooxygenase-like enzyme; TRYPTOPHAN AMINOTRANSFERASE OF ARABIDOPSIS (TAA); and IAA responsive factor SMALL AUXIN UP RNA (SAUR) (Figure 3C). Our reverse transcriptase real-time PCR analysis confirmed that SlTAA1 (Solyc05g031600) and SlYUC (Solyc08g068160) were downregulated in tomato epicotyl tissues under the negative DIF treatment (Figures 4B,C). SlSAUR47 (Solyc04g053000) was significantly downregulated in both hypocotyl and epicotyl tissues under the negative DIF treatment (Figure 4D). 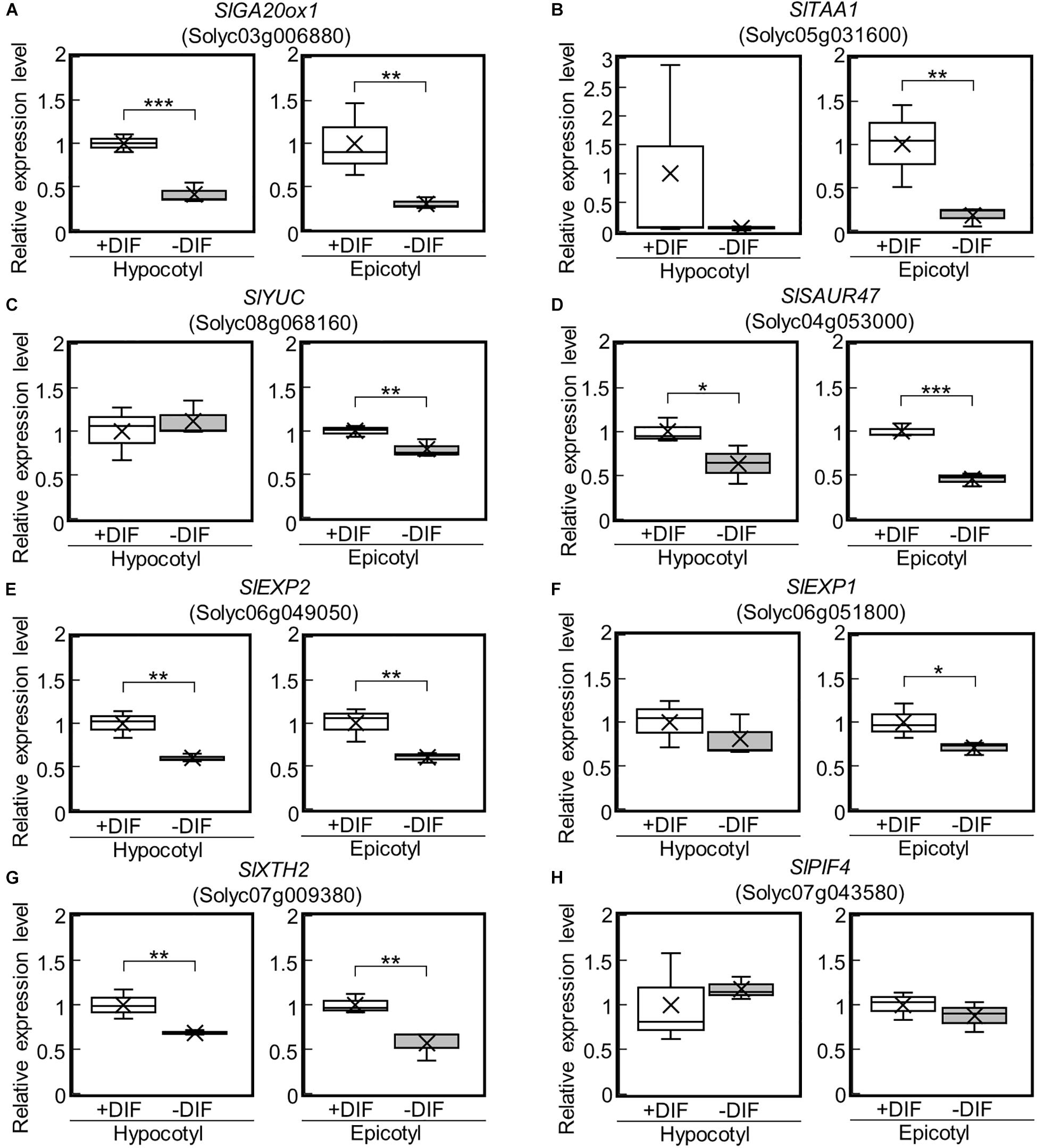 Higher Temperatures Under Positive DIF Upregulate Genes for GA and IAA Biosynthesis, as Well as Cell Wall Modification in Epicotyls 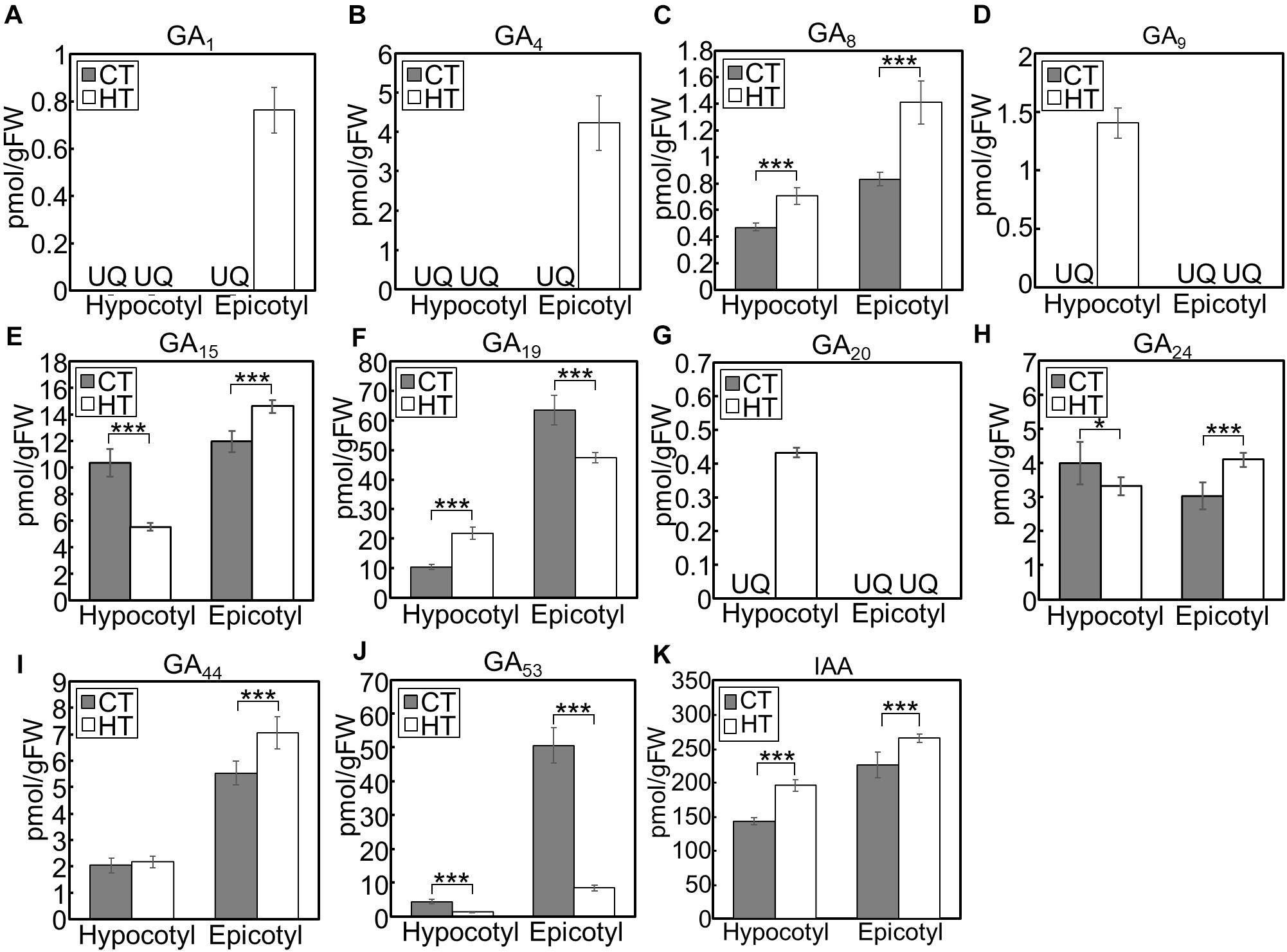 IAA concentrations in negative DIF-treated hypocotyls and epicotyls were slightly but significantly lower than those in positive DIF-treated tissues (Figure 6K). In contrast, the concentrations of IAA in hypocotyls and epicotyls were higher under HT than those under CT (Figure 7K). These results were consistent with the expression pattern of IAA biosynthesis and signaling genes (Figures 4, 5).

We also quantified the concentration of cytokinins (CKs) because the involvement of this hormone in vascular development is well-documented (Kieber and Schaller, 2014). Several N6-(Δ2-isopentenyl) adenine (iP)-type and trans-zeatin-type (tZ-type) species had higher concentrations in negative DIF-treated epicotyls than positive DIF-treated epicotyls (Supplementary Figure 4). Conversely, an opposite effect was found under the CT and HT treatments (Supplementary Figure 5).

In this study, we demonstrated that DT and NT affect stem growth in tomato seedlings, and that this is possibly mediated by the regulation of GA-, IAA-, and cell wall-related genes. Under the positive DIF treatment, higher temperatures promoted stem elongation, and this was accompanied by the upregulation of GA and IAA synthesis genes, resulting in higher concentrations of their active forms. Conversely, negative DIF inhibited stem elongation, which was accompanied by the downregulation of GA and IAA synthesis genes and decrease in GA and IAA concentrations. Although numerous studies have investigated plant growth regulation in response to temperature, our study provides information about possible mechanisms regulating stem growth under DIF treatments.

Under the negative DIF treatment, the concentrations of GA1, GA4, and some GA precursors were lower, whereas those of GA53 were higher, compared with those under positive DIF treatment. Furthermore, the expression of SlGA20ox1 was downregulated under the negative DIF treatment. In contrast, under the positive DIF treatment (i.e., higher temperatures), upregulation of SlGA20ox1 was observed and this treatment had the opposite effect on the profile of GA1, GA4 and the precursors, compared to that of the negative DIF treatment. Since GA20ox catalyzes the following multi-step reactions: GA12/GA53→GA15/GA44→GA24/GA19→GA9/GA20, these results were consistent with the downregulation or upregulation of SlGA20ox1 expression. In addition, as GA8 is the inactivated form of GA1, lower GA8 concentrations in negative DIF-treated epicotyls supported weakened GA activity. GA20ox plays a key role in the GA biosynthesis pathway and affects bioactive GA content (Yamaguchi, 2008). In A. thaliana, the over-expression of GA20ox enhances hypocotyl elongation (Huang et al., 1998; Coles et al., 1999; Ferrero et al., 2019), and the expression of GA20ox (GA20ox1) is upregulated by high temperatures in hypocotyls (Stavang et al., 2009). Thus, it is suggested that SlGA20ox1 plays a key role in regulating stem elongation in tomato seedlings in response to different DIF conditions.

Expression patterns of the cell wall-related genes SlEXP1, SlEXP2, and SlXTH2 were correlated with GA- and IAA-biosynthesis genes. EXPs are cell wall loosening proteins, which cause cell wall expansion (Marowa et al., 2016). Previous studies have shown that EXPs are involved in stem elongation of Oryza sativa (Cho and Kende, 1997a,b; Lee and Kende, 2001, 2002; Choi et al., 2003; Zou et al., 2015) and respond to GA (Cho and Kende, 1997b; Lee and Kende, 2001, 2002). EXP1 has been found to be regulated by temperature in Agrostis scabra and Agrostis stolonifera (Xu et al., 2007). XTH catalyzes Xyloglucan endohydrolysis and endotransglycosylation, which is involved in the modification of cell wall structures (Rose et al., 2002). It has also been reported that EXPs and XTHs are regulated by IAA (Goda et al., 2004; Majda and Robert, 2018; Lehman and Sanguinet, 2019). The response of cell wall-related genes to temperature might be mediated by GA and/or IAA action in tomato seedlings.

Previous studies investigating the molecular mechanisms behind temperature acclimation in A. thaliana identified PIF4 as a key regulator (Proveniers and van Zanten, 2013; de Wit et al., 2014; Quint et al., 2016). Expression of PIF4 was upregulated by high temperatures and was found to control GA and IAA biosynthesis and signaling (Koini et al., 2009; Stavang et al., 2009; Franklin et al., 2011; Sun et al., 2012). In our experiment, SlPIF4 was upregulated in epicotyls under the high temperature positive DIF treatment, suggesting that similar regulatory systems are employed in tomato seedlings. Conversely, SlPIF4 expression was not affected by the negative DIF treatment. The role of PIF4 in the regulation of stem elongation under negative DIF remains to be clarified. Future studies should focus on constructing a loss-of-function mutant to help understand its role.

It is believed that the quality of seedlings greatly affects the final agricultural yield. Our results show that short-term negative DIF treatment can control plant height without affecting stem thickness. This might be an effective technique for growing tomatoes in nurseries. Since stem thickening is accompanied by vascular development, it may give a positive effect on mineral transport, the partition of assimilates, and fruit growth. Findings in this study would shed light on mechanisms of possible new agricultural practices.

The tomato (S. lycopersicum) cultivar used in this study was Managua RZ (RIJK ZWAAN, Netherlands), except for the growth comparison of tomato cultivars under DIF treatments (Supplementary Figure 3). In the comparison experiment, we used CF Momotaro-York and Daiki B Baria (Takii Seed, Kyoto, Japan), and Rinka and Reiyo (Sakata Seed, Kanagawa, Japan).

The middle section of the tomato seedling hypocotyls was harvested and fixed in a 4% paraformaldehyde phosphate buffer solution (Nacalai Tesque, Kyoto, Japan). The fixed hypocotyls were thinly sliced (∼0.5 mm) with a razor blade, and cross sections were observed with fluorescence microscopy (Mirror unit with U-FUW, Olympus BX53, Olympus, Japan). The diameter of vessels was measured using the ImageJ software (Abramoff et al., 2004).

Hypocotyls and epicotyls were frozen in liquid nitrogen and ground to a fine powder with a mortar and pestle. Total RNA was extracted using an RNeasy Mini kit with an RNase-Free DNase Set (Cat. No. 74104/79254, Qiagen, Hilden, Germany). The RNA in samples was quantified using a NanoDrop-1000 spectrophotometer and the quality was monitored using an Agilent 2100 Bioanalyzer (Agilent Technologies, Santa Clara, CA, United States).

This research was supported by the Cross-ministerial Strategic Innovation Promotion Program (SIP) and partially by JSPS KAKENHI Grant Number JP19H05462.

We thank Momo Okumura, Mayumi Tanigawa, and Mizuki Yamada for their advice on tomato cultivation. Microarray analysis was assisted by the National Agriculture and Food Research Organization (NARO).

The Supplementary Material for this article can be found online at: https://www.frontiersin.org/articles/10.3389/fpls.2020.577235/full#supplementary-material

Copyright © 2020 Ohtaka, Yoshida, Kakei, Fukui, Kojima, Takebayashi, Yano, Imanishi and Sakakibara. This is an open-access article distributed under the terms of the Creative Commons Attribution License (CC BY). The use, distribution or reproduction in other forums is permitted, provided the original author(s) and the copyright owner(s) are credited and that the original publication in this journal is cited, in accordance with accepted academic practice. No use, distribution or reproduction is permitted which does not comply with these terms.

Plant Responses to the Dark Scenario