Hexaploid wheat (Triticum aestivum L., AABBDD, 2n = 6x = 42) is one of the most essential cereal crops around the world and provides the major food source for 30% of the global population [International Wheat Genome Sequencing Consortium [IWGSC], 2014]. Wheat diseases such as rusts, powdery mildew, and Fusarium head blight (FHB), however, have always been major threats to wheat production in almost all the wheat growing countries. Stripe rust, caused by Puccinia striiformis Westend. f. sp. tritici (Pst), may cause losses up to 70% and even higher (Roelfs et al., 1992; Wellings, 2011). Leaf rust, caused by P. triticina Eriks (Pt), is another devastating foliar disease, and can also cause severe yield reduction (McIntosh et al., 1995). Developing resistant cultivars is regarded as the most economical and effective means to control diseases. Nevertheless, because of a limited number of effective resistance genes in cultivated wheat and constantly evolving new virulent pathotypes capable of overcoming existing resistance genes in the pathogens, there is an urgent requirement to explore and utilize new resistant resources.

Thinopyrum intermedium (Host) Barkworth and D.R. Dewey (JJJsJsStSt, 2n = 6x = 42), a perennial wild relative of hexaploid wheat, possesses many resistance genes, such as those that are resistant to stem rust, stripe rust, leaf rust, and powdery mildew pathogens (Li and Wang, 2009). Due to its high crossability with hexaploid wheat, several resistance genes have been incorporated into wheat (Li et al., 2019a). Up to now, a total of 81 leaf rust (Xu et al., 2022) and 83 stripe rust resistance genes (Li et al., 2020) have been officially named in wheat, respectively, but only Lr38 (Friebe et al., 1993) and Yr50 (Liu et al., 2013) were reported from Th. intermedium. Therefore, it is of great value to explore new Th. intermedium genetic resources for broadening its application in wheat biotic resistance breeding.

During the two wheat-growing seasons in 2018–2020, all materials were sown in a randomized complete block design with three replicates for evaluating their responses to stripe rust, leaf rust, powdery mildew, and Fusarium head blight (FHB) at the heading stage. Fifteen seeds of each line were sown in 1.5 m rows, spaced 0.25 m apart. Stripe rust was tested at Xindu Experiment Station, Sichuan Academy of Sciences, Chengdu, Sichuan, China. Leaf rust, powdery mildew, and FHB were tested at the Experimental Farm of Shanxi Agricultural University, Jinzhong, Shanxi, China.

Stripe rust responses of Jinchun 5, Jinmai 33, Jintai 170, Th. intermedium, TAI8335, CH51, and Taichung 29 were inoculated with a mixture of Pst races CYR32, CYR33, and CYR34 (1:1:1 ratio) provided by the Institute of Plant Protection, Gansu Academy of Agricultural Sciences, Lanzhou, Gansu, China. Artificial inoculations were carried out by dusting spores onto the leaves. Wheat cv. Taichung 29 was used as the susceptible control. When spores were fully developed on Taichung 29, infection types (ITs) were recorded based on a 0–4 scale, where 0, 0; 1, 2, 3, and 4 indicated immune, highly resistant, resistant, moderately resistant, moderately susceptible, and susceptible, respectively (McIntosh et al., 1995).

Leaf rust reactions of all tested materials were recorded after being inoculated with a mixture of prevalent Pt races TRT, TRJ, and KHJ (1:1:1 ratio), which were collected from wheat-growing areas in northern China (Sheng et al., 2022). Inoculation method was according to Sheng et al. (2022). Wheat cv. Nanda 2419 was used as the susceptible control. ITs were recorded as 0–4 scale according to McIntosh et al. (1995).

Powdery mildew responses of all tested materials were evaluated after being inoculated with Blumeria graminis f. sp. tritici (Bgt) race E09 provided by the Institute of Plant Protection, Chinese Academy of Agricultural Sciences, Beijing, China. Inoculations were carried out as described by Xiang et al. (1994). When conidia were spread across the susceptible control Mingxian 169, ITs were recorded on a 0–9 scale, where 0, 0; 1–2, 3–4, 5–6, and 7–9 indicated immune, near immune, highly resistant, moderately resistant, moderately susceptible, and highly susceptible, respectively (Sheng and Duan, 1991).

Fusarium head blight (FHB) reactions of all tested materials were recorded after being inoculated with Fusarium pathotype F0609 provided by Dr. Xiue Wang, Nanjing Agricultural University, Nanjing, Jiangsu, China. Plants were inoculated as described by Bai et al. (1999) and Zhang et al. (2020) when a spike was just beginning to flower. Sumai 3 was used as the resistant control, and Alondra’s was used as the susceptible control. Disease severity was recorded 27 days post inoculation according to a 0–4 scale, where 0, 1, 2, 3, and 4 indicated immune, resistant, moderately resistant, moderately susceptible, and susceptible, respectively (Zhang et al., 2020).

Wheat-Th. intermedium derived line CH51 was selected from the BC1F8 progeny of the cross of Jintai 170/TAI8335//Jintai 170. A total of 30 CH51 seeds were germinated for chromosome counting. The result showed that the somatic metaphase chromosome number of all 30 seeds are 2n = 42, confirming its cytogenetic stability.

Figure 1. Genomic in situ hybridization (GISH) and Non-denaturing fluorescence in situ hybridization (ND-FISH) analyses of mitotic metaphase chromosomes of CH51. (A) Pseudorogneria spicata total genomic DNA was used as a probe (yellow-green) in GISH analysis. Chromosomes were counterstained with propidium iodide (PI) and fluoresced red. (B) Probes Oligo-pSc119.2-1 (green) and Oligo-pTa535-1 (red) were used in ND-FISH analysis. Chromosomes were counterstained with 4’,6-diamidino-2-phenylindole (DAPI) and fluoresced blue. Arrows (A, B) point to the alien translocation chromosomes. Bars, 10 μm. 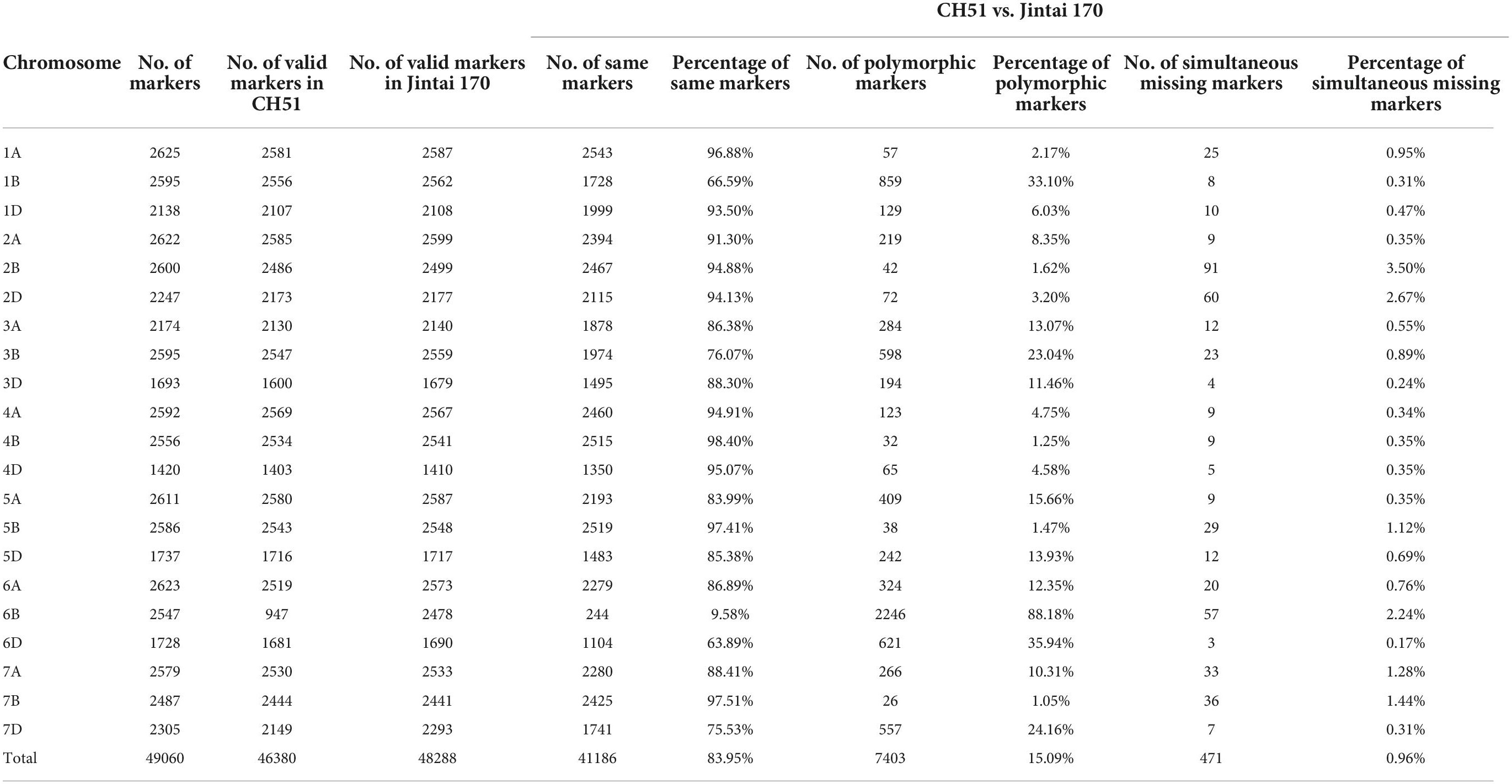 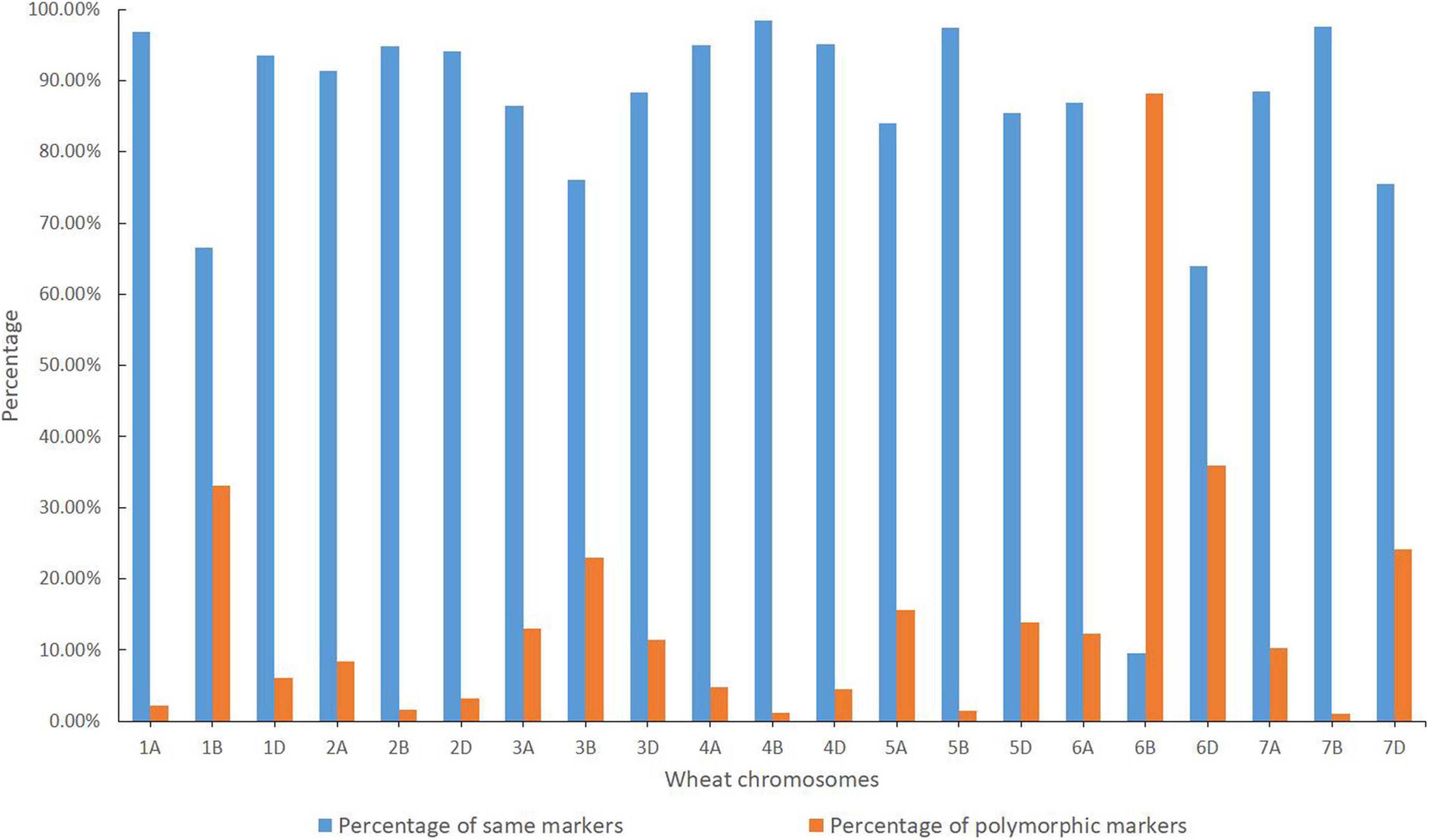 Figure 2. Wheat 55K SNP array analysis. Orange and blue colors indicate the percentages of the same and polymorphic SNP loci in each chromosome in the total number of SNP loci between CH51 and wheat parent Jintai 170, respectively. 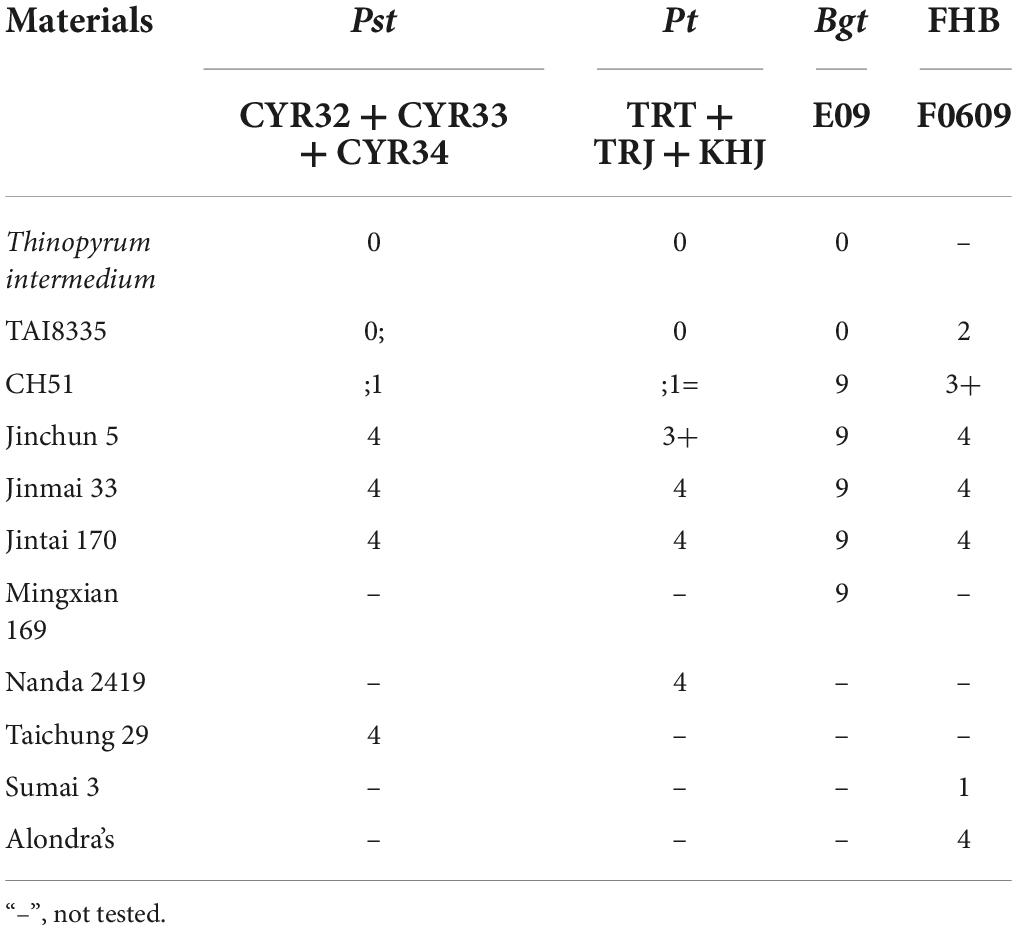 With the rapid development of sequencing technologies, SNP array analysis is becoming increasingly popular in high-throughput genotyping wheat and wild relatives because of its high-density loci and reasonable cost (Winfield et al., 2016). Recently, SNP arrays also play a vital role in detecting the homoeologous relationships between wheat and alien chromosomes in wheat-alien introgression lines (Li et al., 2019b; Wang et al., 2020, 2022). In this study, results from the wheat 55K SNP array showed that chromosome 6B had the highest percentage of polymorphic SNP loci between CH51 and wheat parent Jintai 170 (Figure 2 and Table 1) and also had the highest percentage (62.82%) of missing SNP loci in CH51 (Supplementary Table 1). Combining with the cytology result, we concluded that CH51 is a wheat-Th. intermedium T6StS.6JsL (6B) disomic substitution line. In addition, SNP array results also verified that the tested materials, CS-N6BT6D, CS-N6AT6D, and CS-N6DT6B, used in the current study are correct, which correspond to the highest percentage of missing SNP loci of 62.82% (6B), 67.82% (6A), 76.50% (6D), respectively (Supplementary Table 1).

A wheat-Th. intermedium T6StS.6JsL (6B) disomic substitution line CH51 was developed from the BC1F8 progeny of a partial wheat-Th. intermedium amphiploid TAI8335 and common wheat cv. Jintai 170. The chromosome composition of CH51 is 14A + 12B + 14D + 2T6StS.6JsL. CH51 exhibited high levels of resistance to the prevalent Chinese leaf rust and stripe rust races in the field. Therefore, the newly developed line CH51 can be utilized as a potential germplasm in wheat disease resistance breeding.

We are grateful to Dr. Ennian Yang of Sichuan Academy of Agricultural Sciences for providing the experimental field in Sichuan, Dr. Zujun Yang of University of Electronic Science and Technology of China for helping the FISH analysis, and Dr. Bernd Friebe at the Wheat Genetics Resource Center, Kansas State University for technical expertise and assistance in the GISH experiment.

The Supplementary Material for this article can be found online at: https://www.frontiersin.org/articles/10.3389/fpls.2022.1006281/full#supplementary-material

Copyright © 2022 Zhang, Li, Ge, Guan, Li, Zhang, Wang, Li, Chang, Zhang, Jia and Liu. This is an open-access article distributed under the terms of the Creative Commons Attribution License (CC BY). The use, distribution or reproduction in other forums is permitted, provided the original author(s) and the copyright owner(s) are credited and that the original publication in this journal is cited, in accordance with accepted academic practice. No use, distribution or reproduction is permitted which does not comply with these terms.